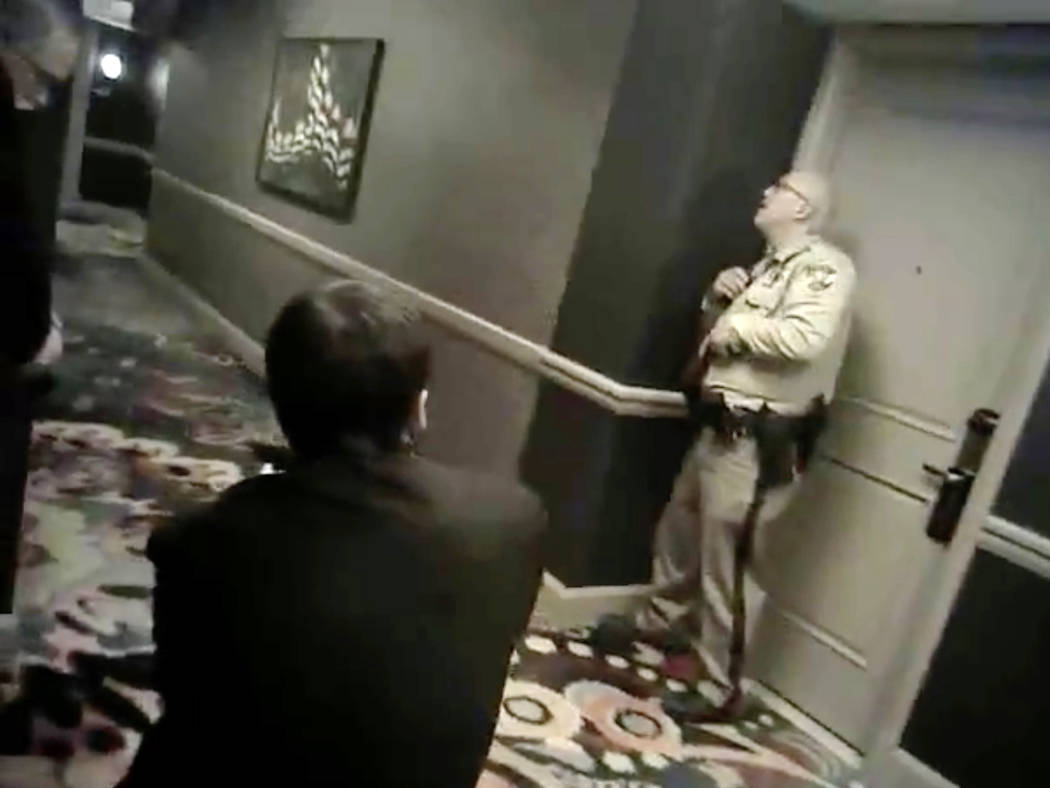 Newly released camera footage shows two Las Vegas police officers, paired with three armed Mandalay Bay security guards, holding their position in a hallway one floor beneath the Oct. 1 gunman for about four and a half minutes as rounds are continually fired on Route 91 Harvest festival-goers below. (Las Vegas Metropolitan Police Department) 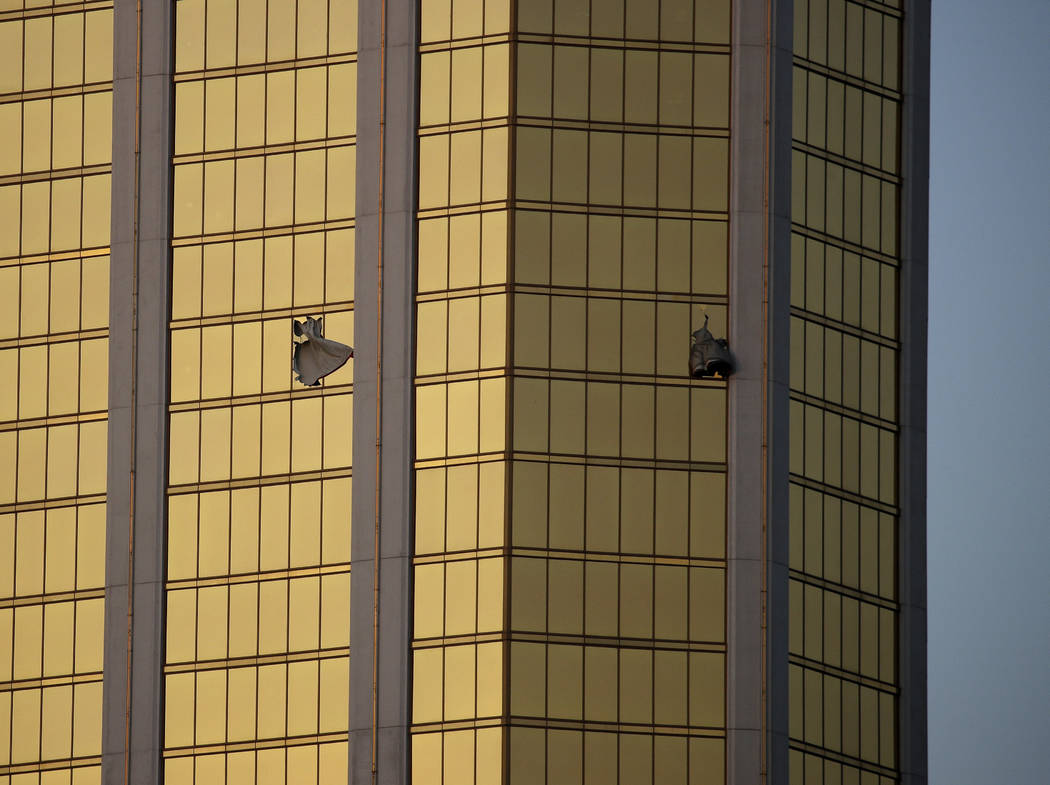 In this Oct. 2, 2017 file photo, drapes billow out of broken windows at the Mandalay Bay resort and casino on the Las Vegas Strip following a mass shooting at a music festival. Authorities say Stephen Craig Paddock broke the windows and began firing with a cache of weapons, killing dozens and injuring hundreds. (AP Photo/John Locher)

A Las Vegas police officer who froze one floor beneath the Route 91 Harvest festival gunman was fired, the Las Vegas Review-Journal has learned.

The move came nine months after the release of body camera footage that showed Hendrex hesitating in a Mandalay Bay hallway one floor beneath the killer, holding his position for nearly five minutes as rounds continually sprayed into the crowd of country music fans below on Oct. 1, 2017.

Records have shown that the attack lasted about 10 minutes.

Metro provided no further comment Tuesday on Hendrex’s employment status. But police union president Steve Grammas confirmed that Hendrex had been fired in connection with his actions on the night of the attack.

“We do not believe Cordell should have been terminated,” Grammas said Tuesday.

He pointed to an internal affairs investigation that he said Metro launched only after body camera footage of Hendrex’s hesitation started circulating in the media.

“After they knew, he continued to work for the department,” Grammas said. “In our opinion, until it came up in the news and they started getting some heat is when they made this decision.”

The news about Hendrex’s termination comes about a month after former Broward County Sheriff’s Deputy Scot Peterson was criminally charged for not confronting a gunman who killed 17 students and staffers at Marjory Stoneman Douglas High School in Parkland, Florida, last year.

In his officer report, which served as his self-reported narrative of the night, he admitted to being scared during the shooting. The report and records like it were released to the Review-Journal only after the newspaper and other media organizations sued for their release.

“I know I hesitated and I remember being terrified with fear and I think that I froze right there in the middle of the hall for how long I can’t say,” Hendrex wrote.

Body camera footage captured by his trainee, Elif Varsin, clocks how long he froze: about 4½ minutes. It was Varsin’s first day in the field.

Grammas said Tuesday that on the night of the attack, “all of our officers were up against something that nobody has been up against before.”

“Everybody talks about how they would respond to these things,” Grammas continued. “But no one knows until they are up against that evil.”

A request to speak to Hendrex on Tuesday went unanswered.

Hendrex and Varsin happened to be in Mandalay Bay’s security office just before the Route 91 attack began about 10:05 that night.

The first 30 seconds of Varsin’s footage, released in June 2018, contain no audio. But about 22 seconds in, the officers can be seen walking out of the resort’s security office and onto the casino floor accompanied by three armed guards. A few seconds later, the audio cuts in and the words “active shooter” can be heard in the background.

For about two minutes, the group walks past slot machines and casino patrons as police radio transmissions describe what is unfolding at the nearby festival grounds. It is not until an officer broadcasts over police radio that shots are coming from Mandalay Bay that the group begins running and makes it to an elevator, hopping in front of hotel guests waiting with their luggage.

Inside the elevator, the group discusses the 32nd floor, where the shooter is located, and the 31st floor. For unknown reasons, Hendrex and Varsin get out on the 31st floor with the armed guards, pistols drawn.

A few steps from the elevator, thunderous gunfire can be heard in the background. But nearly two minutes pass before Hendrex announces his position over police radio.

“I’m inside the Mandalay Bay on the 31st floor,” he says. “I can hear the automatic fire coming from one floor ahead, one floor above us.”

About 20 seconds later, the group hears a transmission from an officer on the ground: “Multiple GSWs (gunshot wounds) to the chest, leg, femoral arteries in the medical tent,” according to the footage.

As the transmission ends, Hendrex suddenly takes several steps backward, then dips behind an alcove next to a hotel room door. His trainee and the guards follow his lead and do the same.

For another minute-and-a-half, the group stands still.

“We’re taking gunfire,” an officer on the ground can be heard saying in the meantime over police radio. “It’s going right over our heads. We’re pinned down here with a bunch of civilians.”

Hendrex “once again hesitated” and “did not know what to do next,” according to his report.

As the final volley of gunfire goes off, Hendrex exclaims, “Oh, my God!”

“We can’t worry about victims,” a different officer can be heard broadcasting over police radio a few seconds later. “We need to stop the shooter before we have more victims. Does anyone have eyes on the shooter?”

Hendrex does not respond but begins walking down the hallway alone.

“Where are you going, sir?” his trainee asks. But Hendrex does not answer.

Michael Quinn, an expert in law enforcement tactical training and use of force, previously told the Review-Journal that it’s hard to judge any officer’s actions from the night of the shooting because “it’s such a terrible incident.”

“But my gut feeling is experienced officers would have moved on that room as quickly as they knew where it was,” he said. “They would have come up with a plan.”

He noted that Hendrex had a trainee with him, which may have affected his response. He also acknowledged the “fear factor.”

Still, he said, “I think it’s our responsibility to get in there as fast as possible.”

“Would that have saved lives? Probably, if it went well,” Quinn said. “Would it have cost them their lives? Yes, absolutely. That’s part of the job.”

The gunman killed 58 concertgoers and injured hundreds more before fatally shooting himself.

Fighting for his job

In the wake of the footage release, Metro spokeswoman Carla Alston told the Review-Journal that “every officer’s actions that night are being evaluated.”

“One of the things Sheriff (Joe) Lombardo has said from the beginning is that this is an ongoing investigation,” Alston continued. “Part of that investigation is the evaluation of the performance, actions and conduct of every officer and civilian employee involved in the incident.”

Alston did not confirm at the time that Hendrex was under internal investigation. It remains unclear whether any other officers were disciplined or terminated as a result of their actions on Oct. 1.

Grammas said he and his union are fighting for Hendrex, representing the former officer during an arbitration process with the department to “get his job back.” The arbitrator has not made a decision.

“We had plenty of officers doing heroic things, and there were officers who were afraid of the situation but still acted,” Grammas said of the mass shooting. “Cordell was up there. He was on that 31st floor. And he had a lot of things to deal with.”

Metro confirmed that as of Tuesday, Varsin is still employed by the department and serving as a patrol officer in the resort corridor.

This story has been updated to reflect the correct amount of time between the release of body camera footage and Hendrex’s termination.