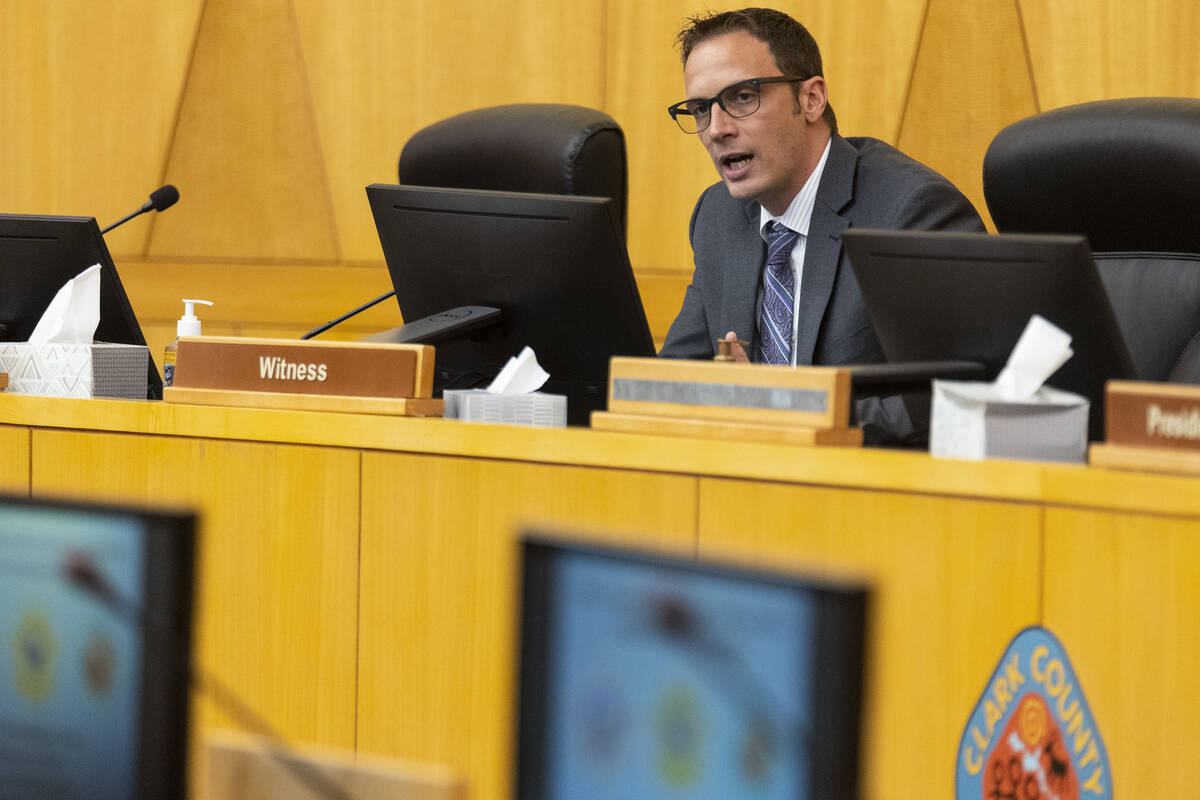 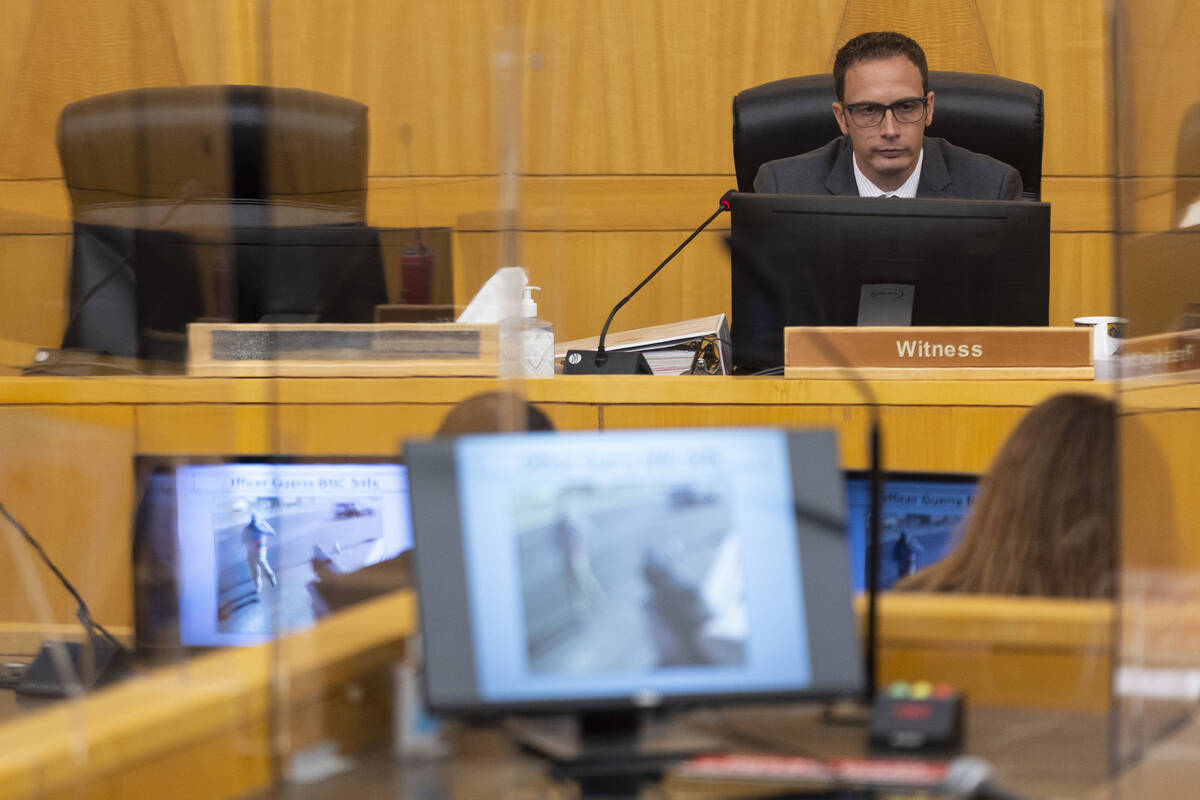 A Las Vegas police officer shot and killed an advancing, knife-wielding suspect in January as two other officers tried to obtain shotguns that fire nonlethal rounds, a detective said at an official fact-finding hearing Wednesday.

One of the officers had picked up his nonlethal shotgun after walking to his patrol car, while the other encountered “an obstruction” just before Guerra fired at Otero, Ubbens said.

Otero, pointing a 6-inch knife at Guerra, kept moving forward at the officer despite repeated warnings to stop, and an autopsy later revealed Otero had a “high level of methamphetamine” in his body, the detective said.

Ubbens was the sole witness during a 24-minute-long hearing known as a Police Fatality Public Fact-Finding Review, held at the Clark County Government Center in downtown Las Vegas.

Attendees of the hearing included a small group of government staffers, security guards and almost no one from the public aside from a news reporter and photographer. No one from Otero’s family showed up.

The review hearings are convened after the district attorney’s office decides not to seek criminal charges in officer-involved deaths, according to county spokesman Eric Pappa.

Otero’s fatal shooting occurred after officers answered a 911 call from his father, who had filed a temporary restraining order against his troubled son, at 10:25 a.m. on Jan. 6 at the father’s home in the 6700 block of Frances Celia Avenue, near Boulder Highway and Russell Road.

The father called saying that Otero was outside armed with a knife and trying to force his way in.

A recording of the father’s emergency call was played during the hearing.

“I need Metro to my house,” said the man, who could be overheard speaking to someone in Spanish. “He tried to get into this house. He’s got a knife. He did try to break into the house.”

Ricardo had earlier allegedly slashed the tires of his father’s car, the man told police.

Guerra understood that the call was about a possible burglary, Ubbens said.

Video from Guerra’s body camera, exhibited on TV screens at the hearing, showed him radioing in that he was on his way.

The screens also showed an aerial photo, taken from a police drone, of Guerra’s car and those of the two other officers parked on the street beside a sidewalk.

At some point, Otero had put down a backpack, withdrew a knife from his rear waistband and walked toward the officers, Ubbens said.

One of the officers backed away about 80 feet as Otero advanced toward them, Ubbens said.

From the video, as Guerra exited his vehicle, he is seen pointing his service firearm toward Otero, who is dressed in gray clothing in the middle of the roadway and headed in his direction.

Otero, in a near run and pointing the fixed-blade knife, continued to make his way toward Guerra.

Guerra then fired four shots into Otero’s abdomen. The wounded man crumpled onto the sidewalk.

“Shots fired, shots fired,” Guerra said. “He chased us with a knife.”

At the time he was shot, Otero was about 12 feet from the officer, Ubbens said.

County officials played another another video, taken by a civilian’s phone camera and lasting only seconds, of the moment when the shots hit Otero.

“Oh my god!” said the unnamed civilian witness in the video. “Bro! What the f—-!”

The officer who retrieved his non lethal shotgun from his car had just picked it up when he heard the shots, Ubbens said.

After the shooting, police recovered both the knife Orteo held and a box cutter on his person, he said.

During his encounter with officers, Otero “seemed agitated,” he said.

“Officer Guerra believed the suspect was trying to kill him,” he added.

Under questioning from Arnold, the ombudsman, Ubbens acknowledged that police knew that Otero had mental health issues from a message on the computer dispatch system.

He said that Guerra and the other two officers at the scene had graduated from Crisis Intervention Team training, which is hours of instruction on how to deal with people with mental illnesses during police calls.

Two of the officers at the scene discussed using nonlethal methods, including a taser, nonlethal shotguns or talking to Otero on a public address system, Ubbens said.

When Arnold asked why Guerra had his gun drawn when he arrived, Ubbens said did not have any statements from the officer, but that all three officers were trained to use nonlethal alternatives.

Ubbens had a similar answer when Arnold asked why Guerra used his firearm instead of a nonlethal shotgun — “Officer Guerra did not give me a statement.”

One of the other officers who sought out a nonlethal shotgun, Ubbens said, had “an obstruction” that prevented him from using it, but the detective did not elaborate on what it was.

The fact-finding review is required by Clark County law since 2013. In officer-involved shootings or in-custody deaths, a Metro detective is called to investigate, issue a report and then the district attorney assigns a senior prosecutor from the major violators unit. A group of about a dozen senior prosecutors consider whether to file criminal charges.

If not, a hearing officer, ombudsman and deputy district attorney are selected and the fact-finding hearing is scheduled.

Police officers who are involved in fatal shootings are not required to testify at the review hearings.