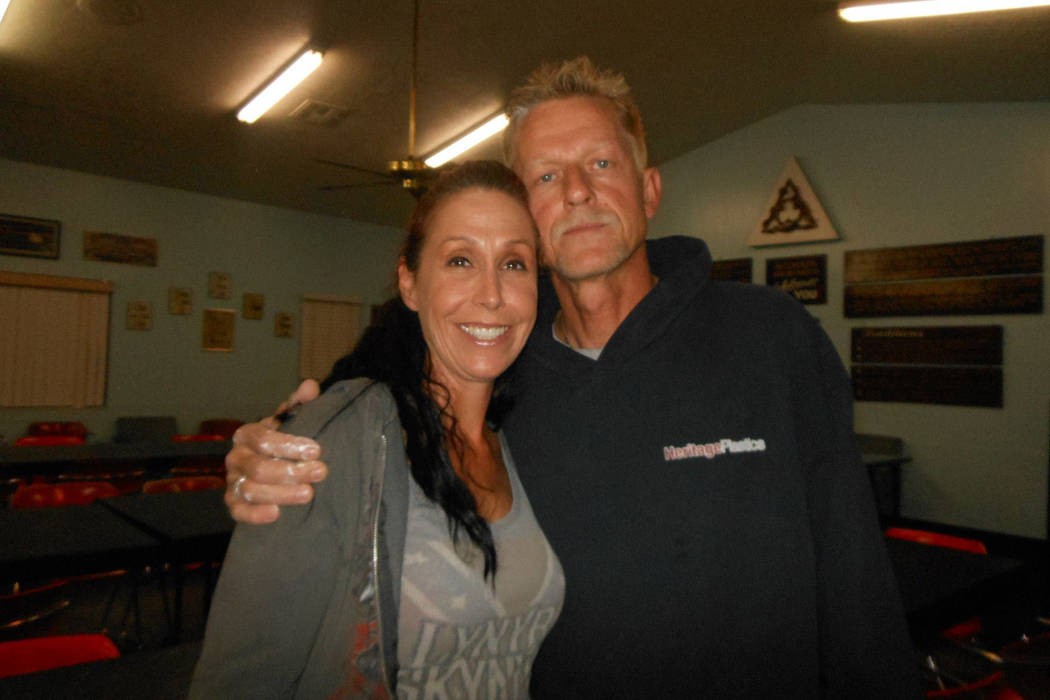 Denise McClellan and her husband, Roy, pose for a photo. Roy McClellan killed himself in Pahrump on Nov. 17, 2017, nearly two months after surviving the Las Vegas mass shooting. (Denise McClellan) 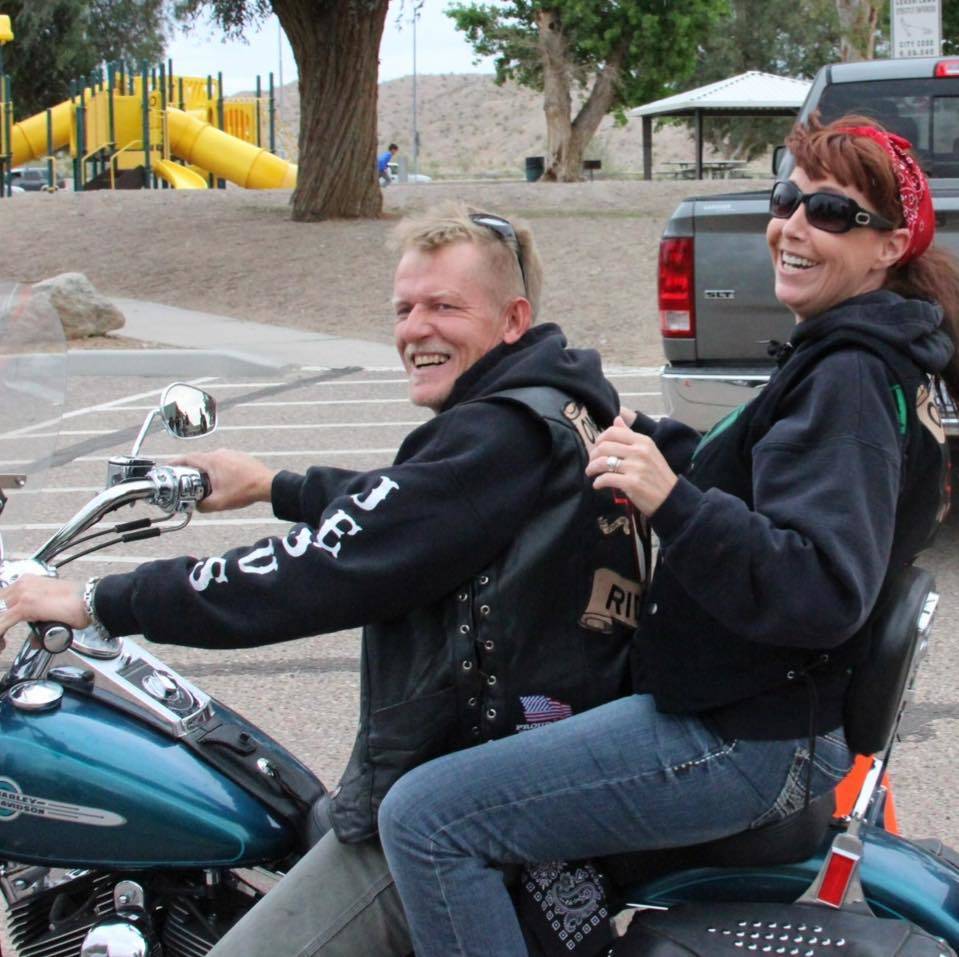 Roy and Denise McClellan ride on a motorcycle together in December 2015. Roy McClellan, a Las Vegas mass shooting survivor, killed himself in Pahrump on Nov. 17, 2017. (Denise McClellan) 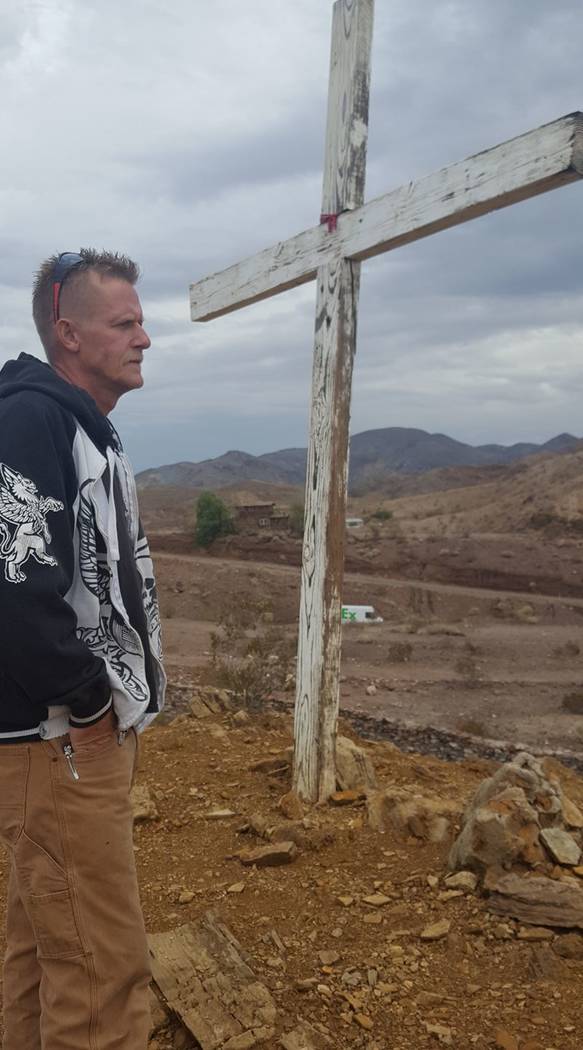 Roy McClellan prays at a cross in Whitney, Nevada, on Oct. 4, 2017. McClellan, a Las Vegas mass shooting survivor, killed himself in Pahrump on Nov. 17, 2017. (Denise McClellan) 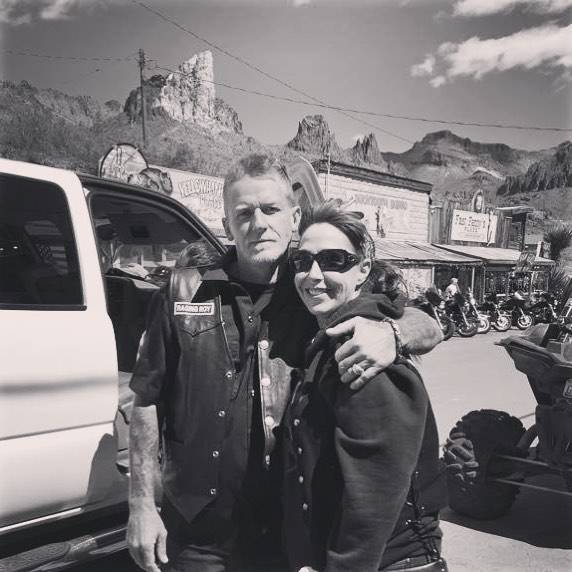 Denise McClellan and her husband, Roy, pose for a photo. Roy McClellan killed himself on Nov. 17, 2017, in Pahrump nearly two months after surviving the Las Vegas mass shooting. (Denise McClellan) 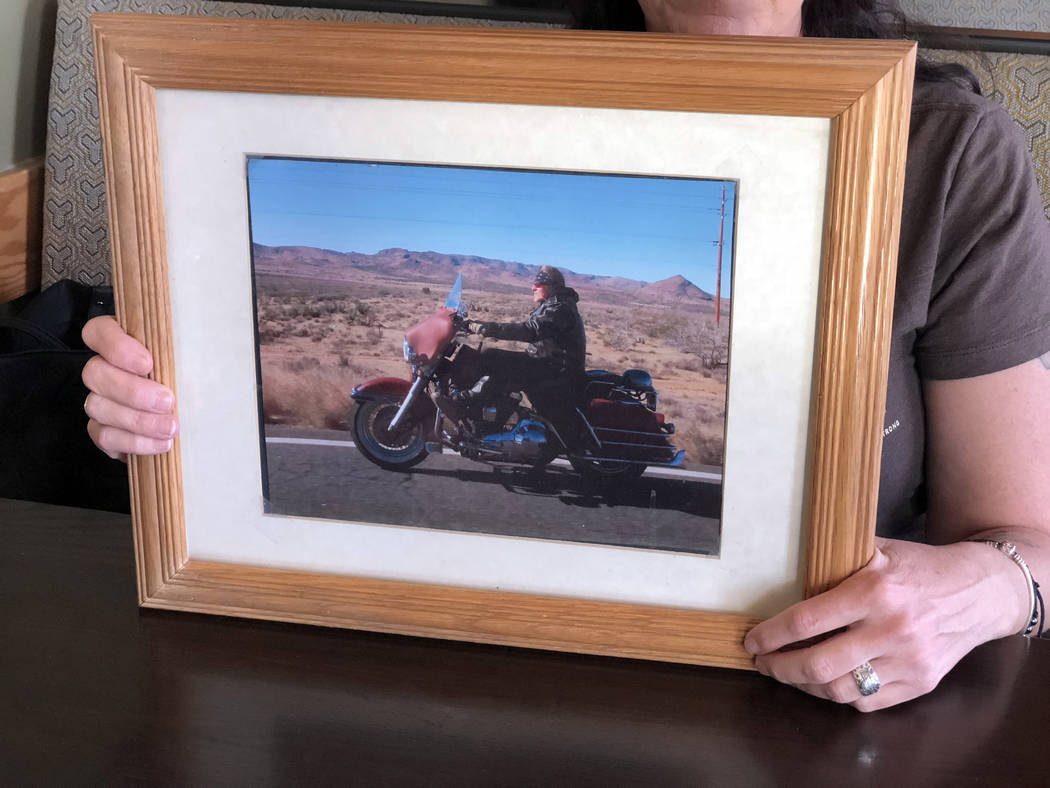 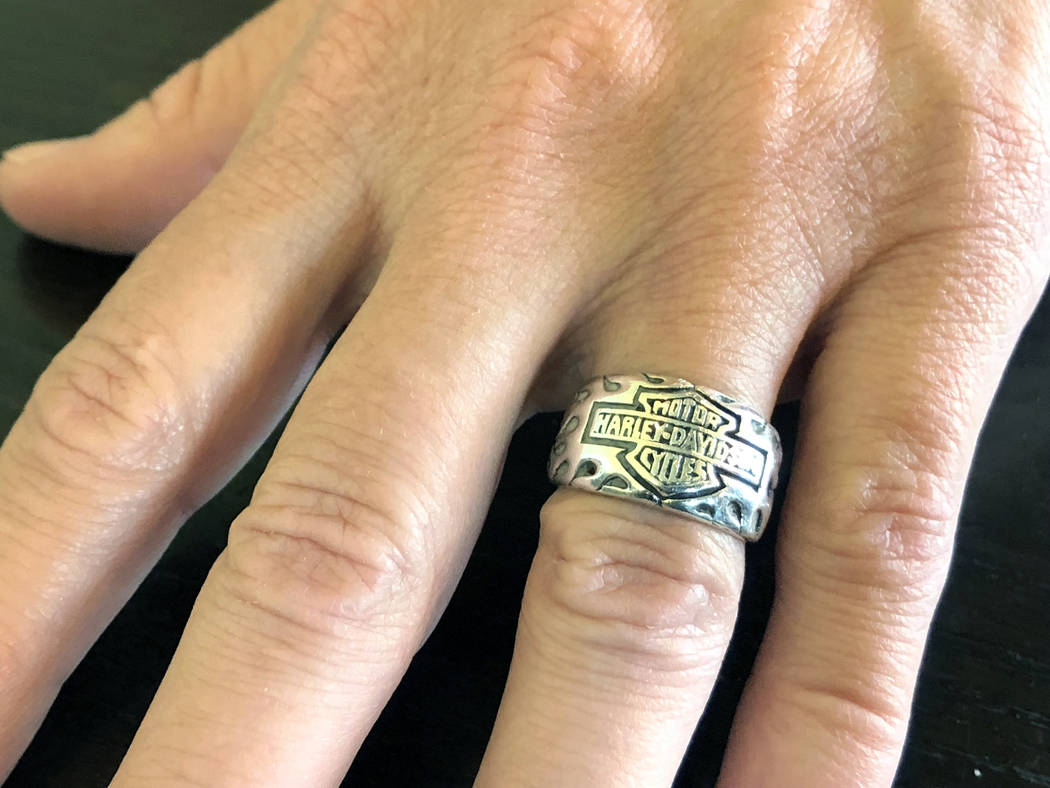 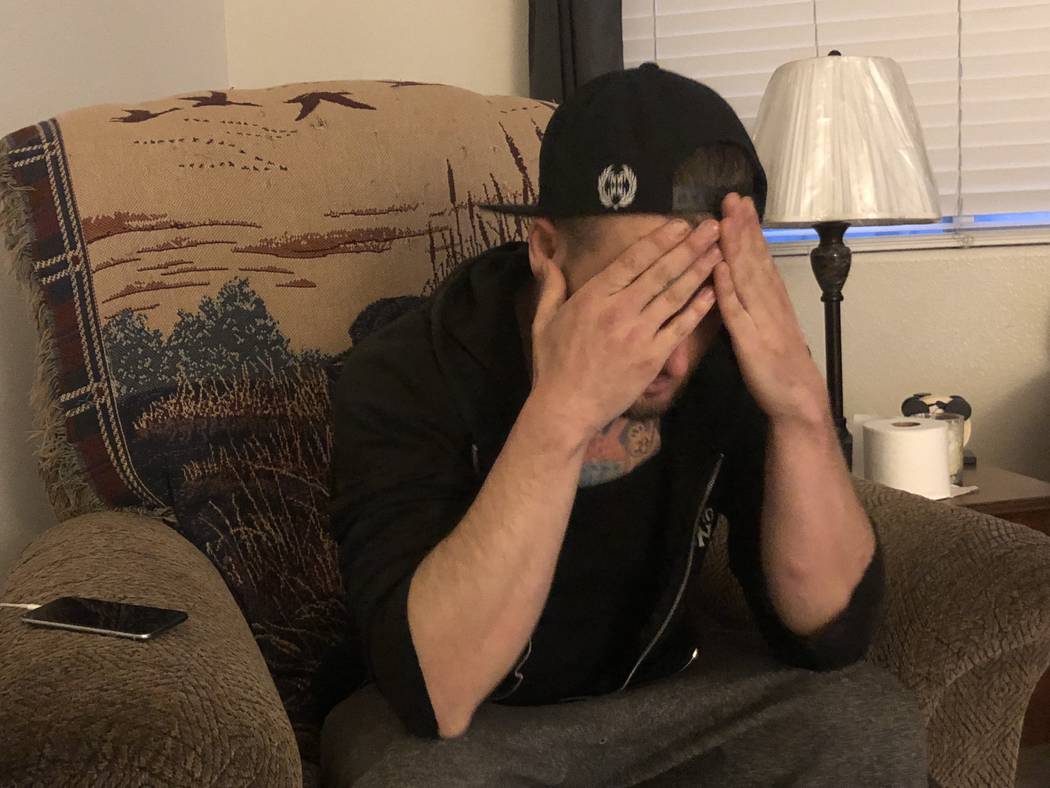 Phillip James Demasseo, 33, is photographed at his friend's home on Wednesday, Feb. 28, 2018. Demasseo was working as a bartender at Route 91 Harvest on Oct. 1. In the months since, he became homeless and was on suicide watch. Each day, he struggles with the trauma. (Briana Erickson/Las Vegas Review-Journal) 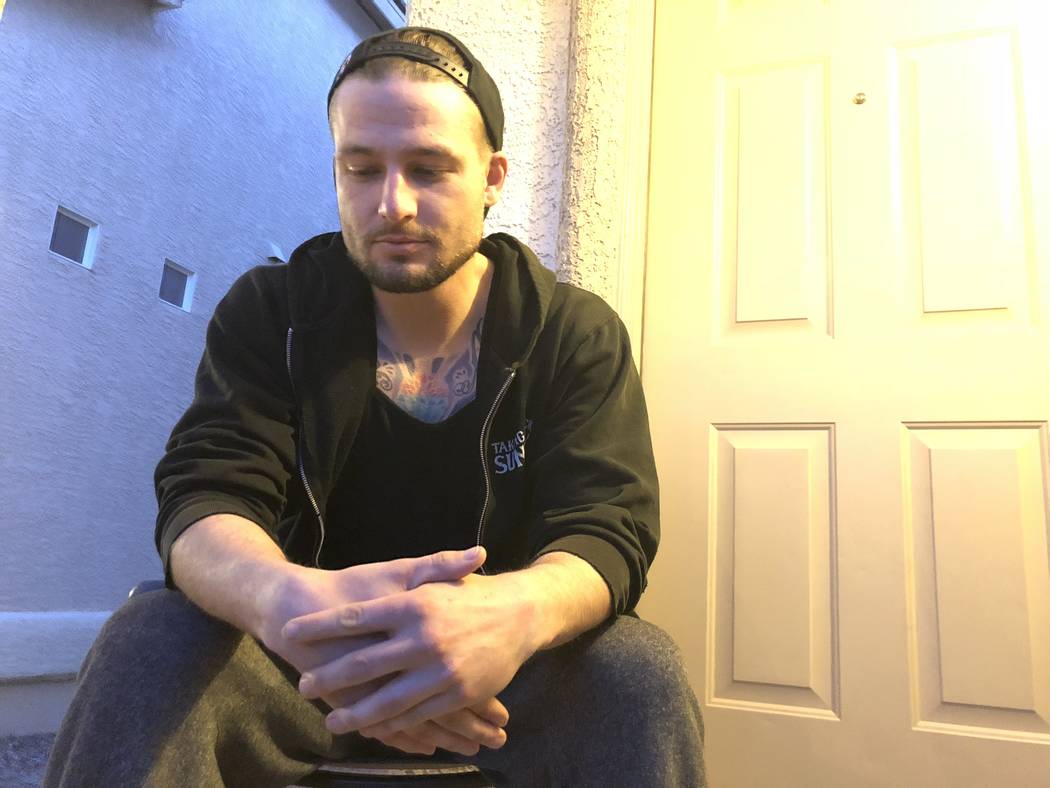 Phillip James Demasseo, 33, is photographed at his friend's home on Wednesday, Feb. 28, 2018. Demasseo was working as a bartender at Route 91 Harvest on Oct. 1. In the months since, he became homeless and was on suicide watch. Each day, he struggles with the trauma. (Briana Erickson/Las Vegas Review-Journal)

His story — one of good days and bad in the struggle against depression — is not unlike others in a community still grieving.

The morning after they had escaped the Oct. 1 mass shooting on the Strip, McClellan told his wife, Denise, “This is really messing with my head.”

Days later, with his wife’s encouragement, he entered counseling and continued for the next seven weeks.

But early on Nov. 17, Roy McClellan lay down in the right lane of state Route 160 near Homestead Road in Pahrump. His wife said she hadn’t heard from him for more than 11 hours. It was shortly after 1:30 a.m. when a Chevrolet Camaro struck him and sped off, investigators said. His death was ruled a suicide last week by the Clark County coroner.

Almost immediately after Oct. 1, Denise McClellan noticed a shift in her husband’s behavior.

“There was a lot of change after the shooting,” she told the Las Vegas Review-Journal this week. “He was more reckless.”

Gerard Lawson, president of the American Counseling Association, said a traumatic event such as a mass shooting can act as a tipping point for someone with pre-existing mental health issues.

“The thing about trauma is that it’s not just about the initial experience. It changes the way we see the world,” Lawson said. “If you imagine that we have this lens we see the world through, trauma cracks that lens. And everything that happens from that point forward is seen through this distorted view.”

Lawson, too, is a mass shooting survivor. The certified counselor and associate professor at Virginia Tech was on campus in April 2007 when a gunman killed 32 people.

Roy McClellan had never been clinically diagnosed with depression, but his wife suspected he had been depressed all the same.

“What if he did commit suicide? I wasn’t there,” Denise McClellan said. “But depression is real. My husband suffered after this, and I watched him get worse.”

At least 492 people have walked into the Vegas Strong Resiliency Center since its opening on Oct. 23. According to a Clark County spokeswoman, of the 492 walk-ins, 180 of them had asked for counseling referrals as of Feb. 23. Also, the center has received 1,121 calls, with 100 seeking counseling referrals.

“It’s just very low because a lot of people don’t even know we’re here. The first week, the first month, people are just in shock, and they’ll go in and out of it,” said Monique Cox, a licensed therapist who works once a week at the center. “It takes months for things to settle back in.”

At least 22,000 concertgoers were in the crowd on Oct. 1, the final night of the country music festival, and 58 of them were killed.

Like Roy McClellan, Phillip “P.J.” Demasseo’s teetering mental health took a blow after the Las Vegas shooting. He was a bartender at the festival.

Lawson, the counselor, said another traumatic event “really does complicate things” for people who have had previous trauma.

In 2016, Demasseo attempted suicide after losing a loved one. He said he tried several methods.

“Me trying to deal with everything on the surface, my past trauma, it prepared me for this trauma,” he said. “I’ve been losing people my whole life.”

Shortly after Oct. 1, Demasseo moved to Portland, Oregon, for a change of scenery from the Las Vegas he knew. He ended up living in his 2007 red Chevrolet Impala.

Each day, he drove across bridges and contemplated walking off them. It got so bad in December that he checked himself into a hospital, he said. But Demasseo hasn’t sought counseling consistently.

“It’s hard even making it to a counselor,” he said. “Why? I’m having a good day today, I don’t wanna talk about this. It’s frustrating.”

But Cox, the local family therapist, argued, “Some patients think talking won’t help, it won’t bring somebody back, it won’t change it. But it does help. It’s a little burden that they’re carrying.”

Demasseo, 33, said he has worked the Route 91 festival every year, but he hasn’t had a full-time gig or even stepped behind a bar since Oct. 1.

Neither has 27-year-old Caitlin Brunner, another bartender at the concert. Brunner said she “lost her mind” in the middle of a parking lot when she heard the sound of electric drills — a symptom of her post-traumatic stress disorder.

“I just want to get back to work,” she said. “I would love to find full-time employment, but I might have to call out once in a while because of my PTSD.”

Just before Thanksgiving, Brunner checked herself into Seven Hills Behavioral Hospital, where she stayed for a couple of hours before starting outpatient treatment.

“I blinked, and I saw myself ending my life,” she said. “I didn’t want that.”

Lawson emphasized that it’s never too soon to ask for help after a traumatic experience.

“It’s almost like a regular wound. If you let it scab over first, it’s going to be much harder for that wound to heal than if you just get in and clean it up and tend to it immediately,” he said. “The same thing for mental health. There’s this window of time that is different for each person, but it’s generally weeks, not months, that we’d want people to reach out.”

Christine Caria, who was severely injured when she was trampled the night of the shooting, said she goes to counseling once a week.

The 50-year-old survivor said she has tried a form of psychotherapy called EMDR, “eye movement desensitization and reprocessing.”

It uses eye movements to train her left and right brain to work together to desensitize memories, Caria said.

“It’s known to be effective for trauma,” Cox added, although she has not practiced it on her clients. “A lot of people that try it said it really helps. From what I understand, it kind of lessens the effects of it.”

In the moment, Caria said, it feels like it’s not working. But her night terrors have decreased to two nights a week, and her anxiety has gone down.

“Now I’m back in my body,” she said. “And I’m trying to make sense of all this mass shooting business.”

After the Route 91 shooting and her husband’s suicide in November, Denise McClellan wondered if she would ever regain normalcy.

And for a while, she said, it didn’t seem like it. She would wake up, go to work and then go straight home. She said she did this on repeat for at least two months before seeking help from a counselor.

“Sometimes it feels like you’re the only one suffering, but you’re not,” Denise McClellan said. “It’s imperative to seek help because when you go through something like this, maybe you don’t realize at first how traumatic it was.”

During that time she now calls a “dark hole,” she said she understood, for the first time since marrying Roy McClellan in 2012, what kind of demons her husband had been battling most his life.

But on Wednesday afternoon, the 49-year-old survivor didn’t shed a tear as she reflected on the five months since the shooting.

Instead she smiled, saying she was finally at peace.

The next morning, she would make the roughly 1,200-mile drive from Las Vegas to her new home in San Antonio, Texas, with Roy McClellan’s ashes and their two dogs.

“I’m not letting that guy win,” Denise McClellan said of the Oct. 1 gunman. “No way.”