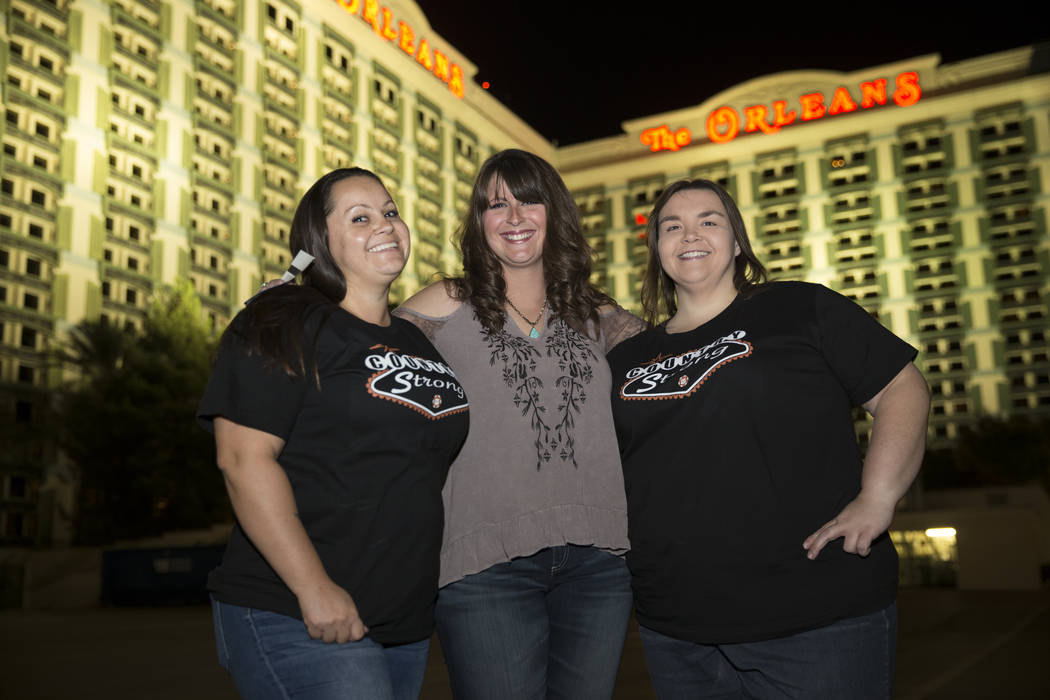 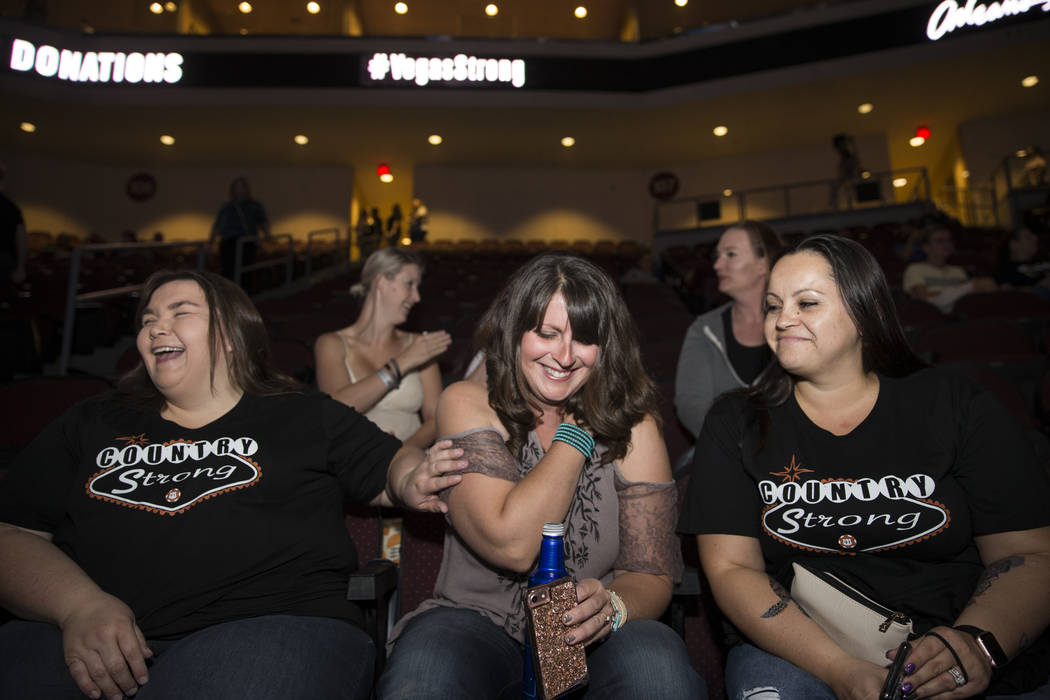 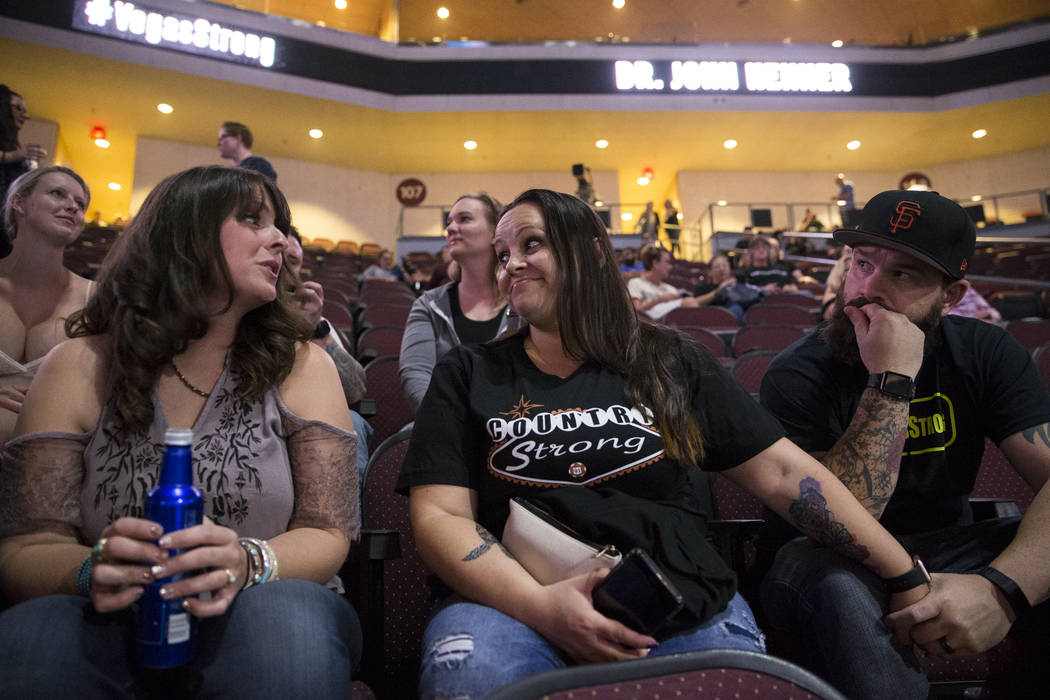 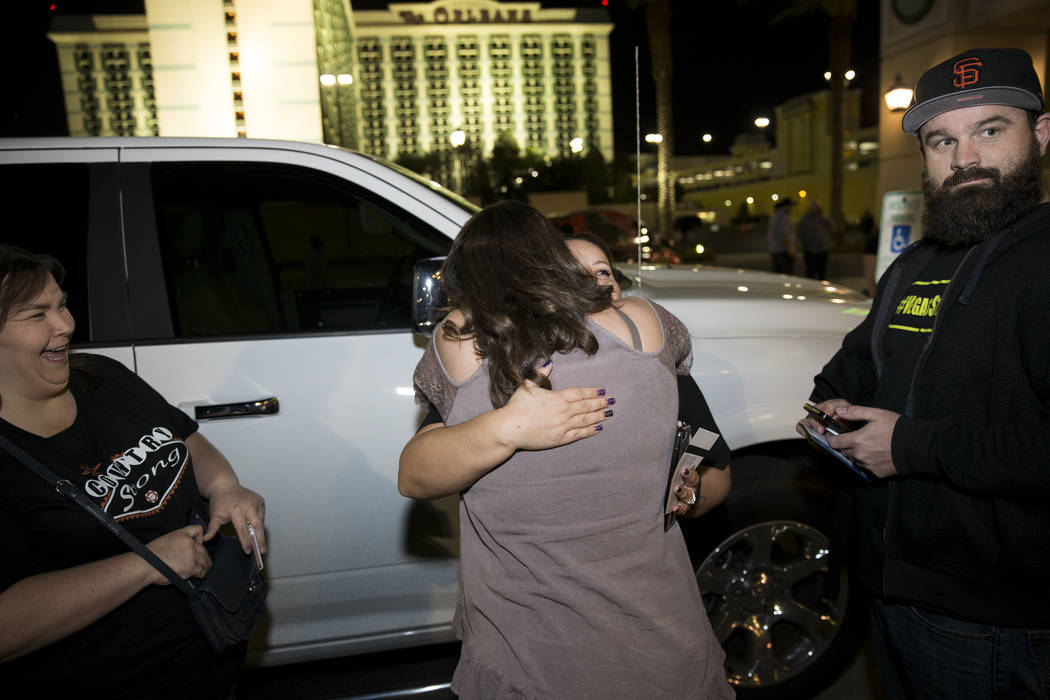 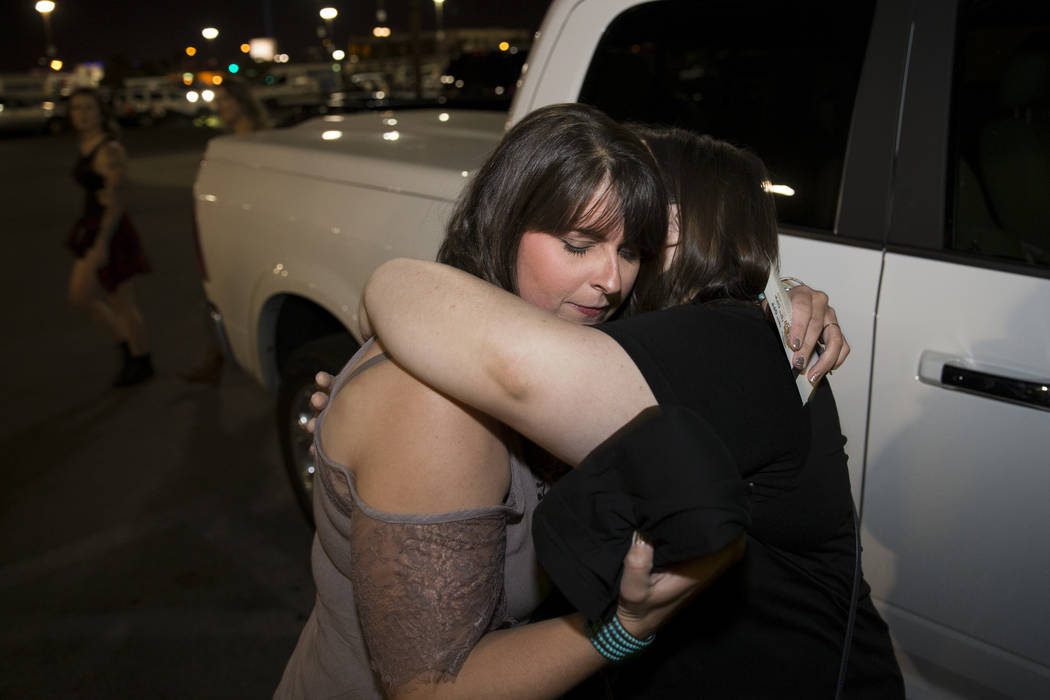 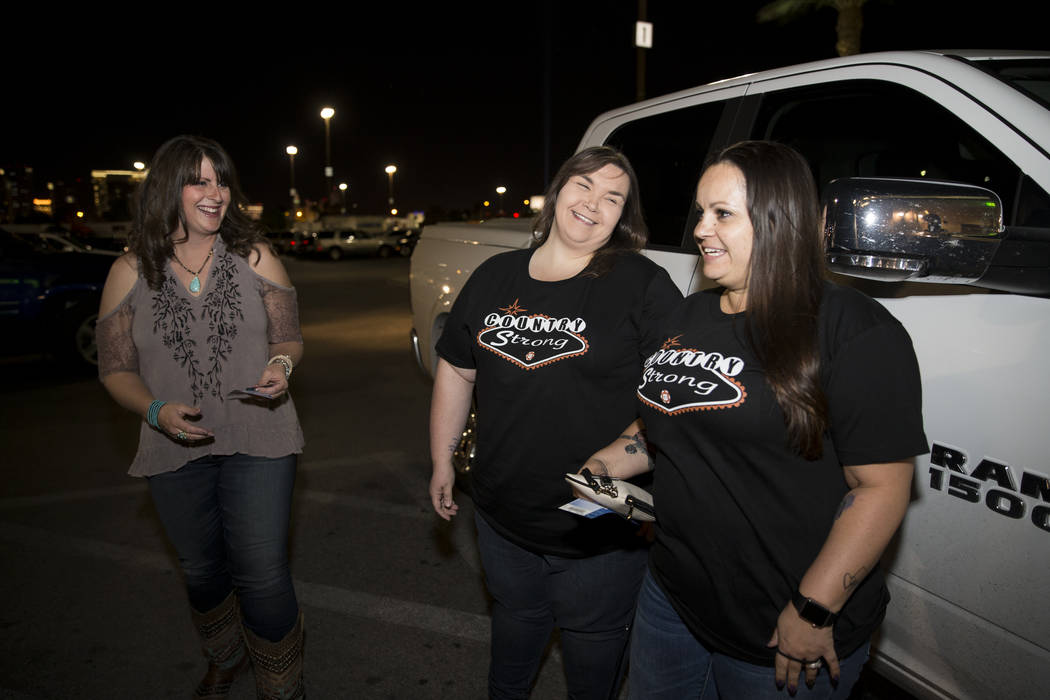 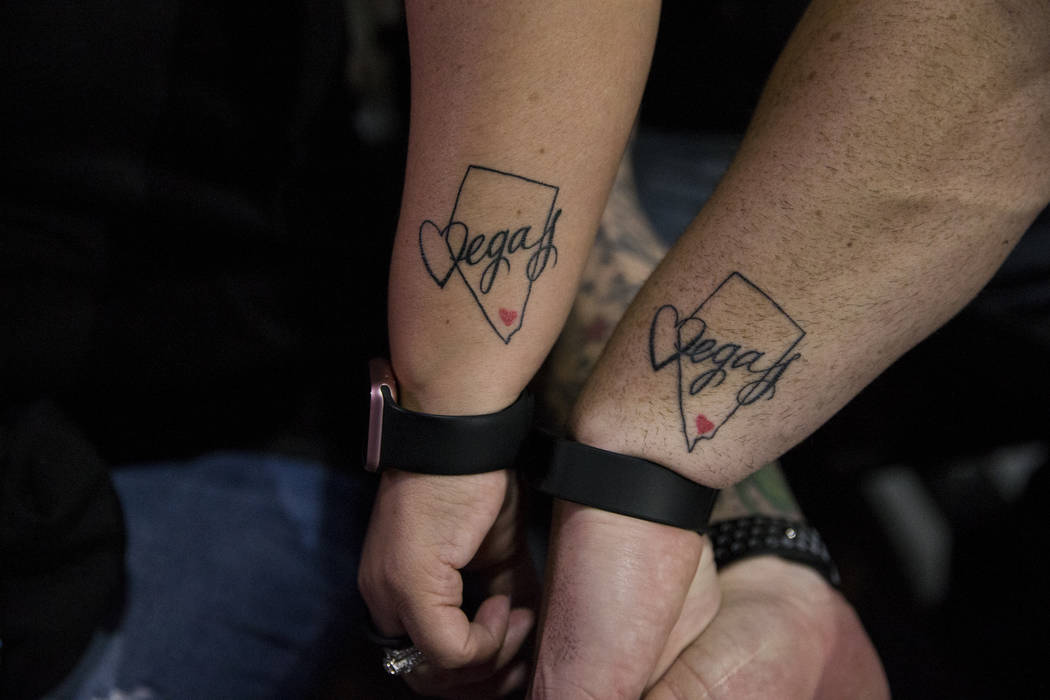 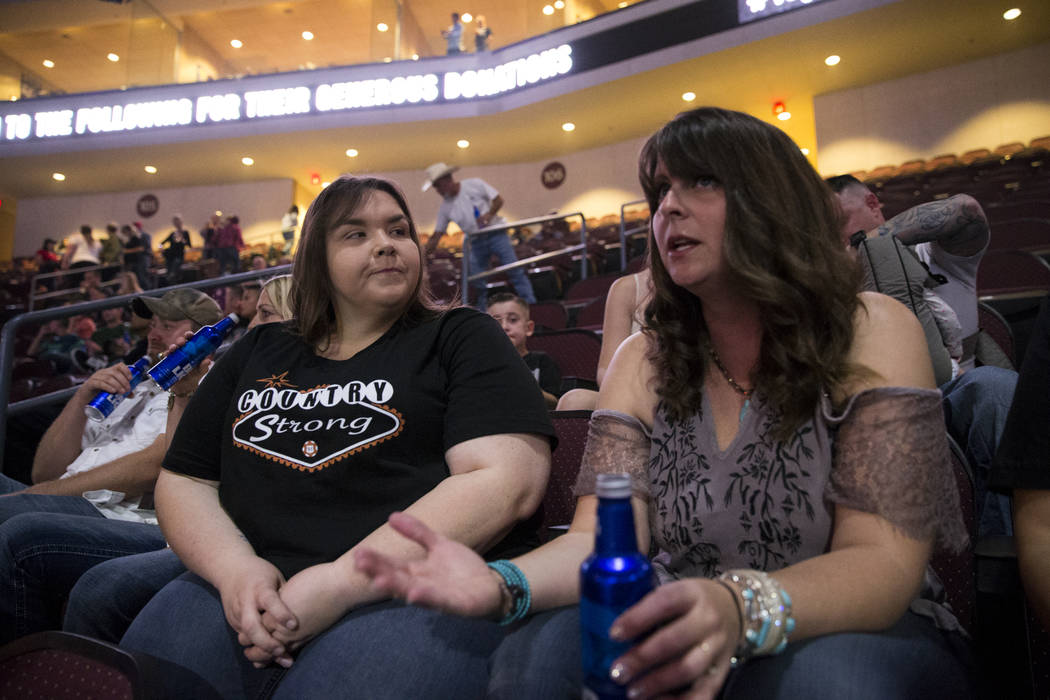 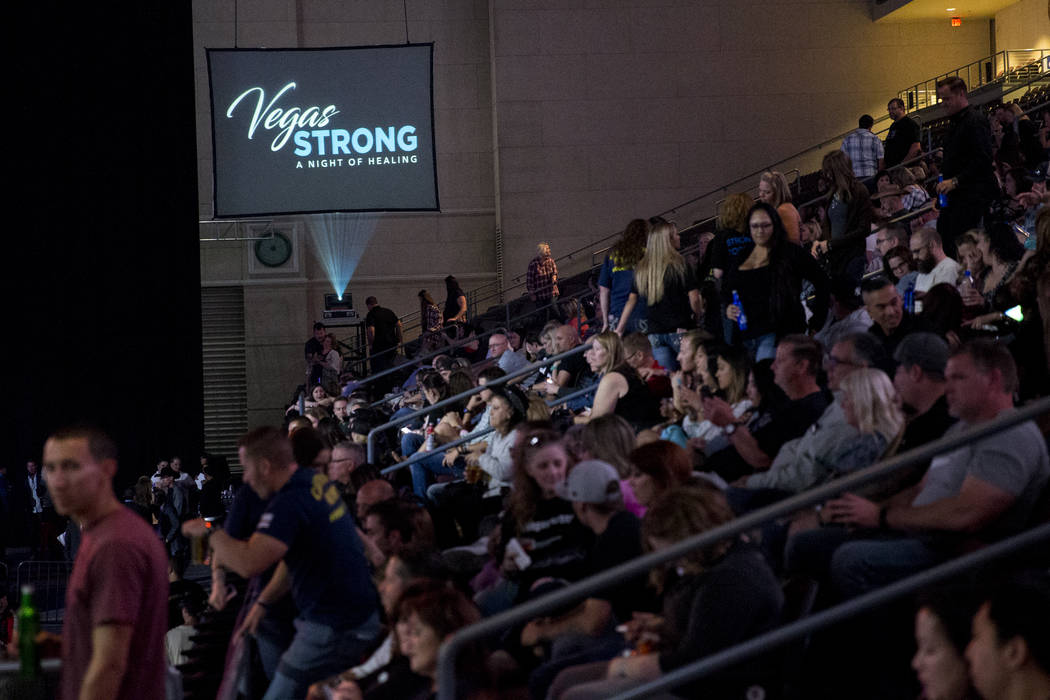 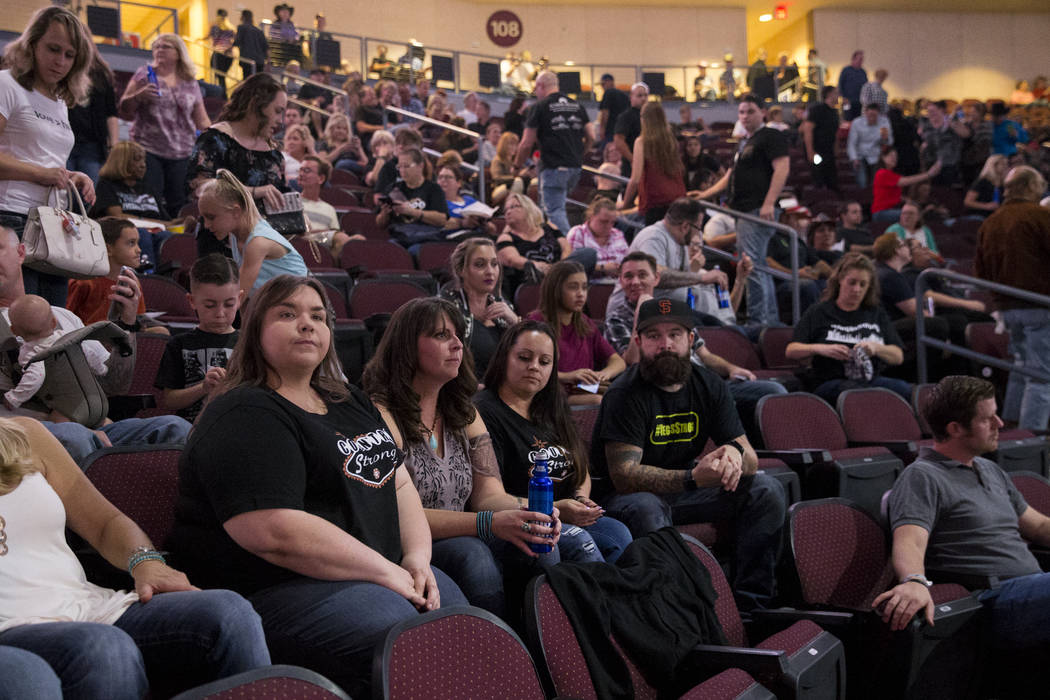 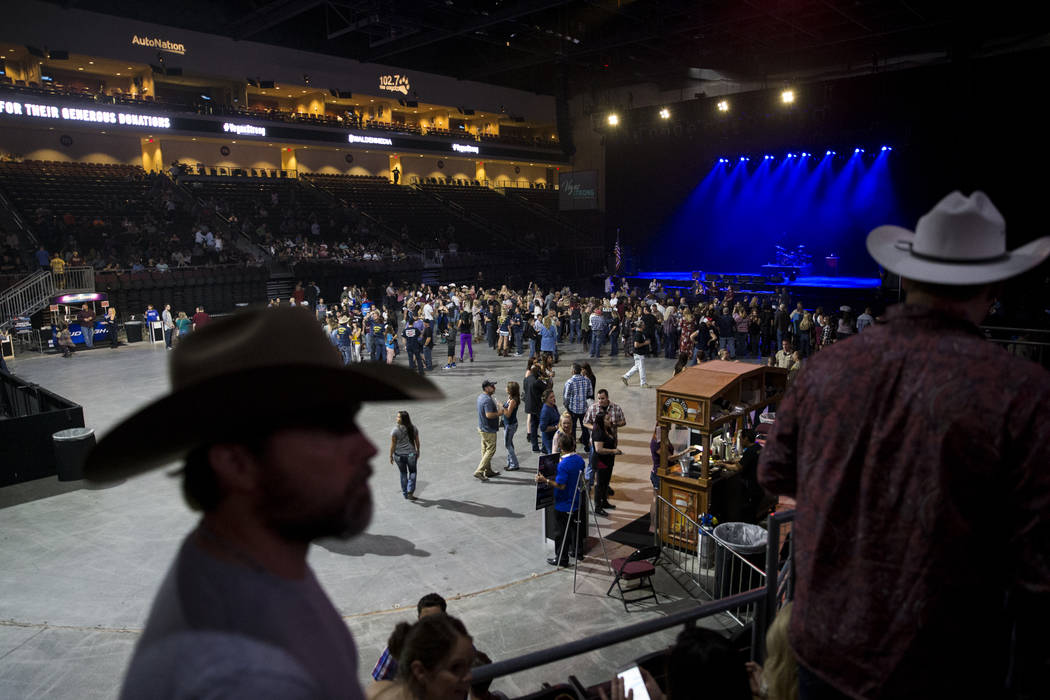 Oct. 8, 10:03 p.m. “Sweet dreams beautiful girls,” Anna Kopp wrote in a Facebook message to four women with whom she fled the storm of bullets that rained down over the Route 91 Harvest festival a week earlier.

“Same to all of you,” Teri Tarson replied. She’d met Kopp and two others in the group of five the previous weekend, but they became fast friends after escaping physical harm.

Now almost three weeks since a shooter killed 58 and wounded hundreds of others at the Oct. 1 country music festival near Mandalay Bay, the five women, some of whom barely knew one another, have formed a makeshift support group to help one another through different stages of post-traumatic stress.

Tarson, 39, has nightmares every time she falls asleep, and she can’t stay asleep for more than a couple hours at a time. Around big crowds and at the grocery store, she panics.

Ashley Beeman, 30, said she’s been feeling “pretty OK.” She said she might still be in shock — she understands the trauma cycle through her job as a social worker in Carson City — but she knows which symptoms to look out for that might need medical attention, should they arise.

They’re on different ends of the spectrum in regard to their experiences, but that’s normal, said Ramu Komanduri, chief of staff for the VA Southern Nevada Health Care System.

“Everyone can have a different response, and there’s so many reasons why they’re responding differently,” he said. “It is not uncommon, though, to have those nightmares, just amazing anxiety and fear.”

Tarson, Beeman and Kopp met up with Amber Diskin, 33, and Michele Langlois, 43, at the festival.

Langlois was friends with Tarson and offered her an extra ticket; Tarson didn’t know the others. Diskin and Langlois attended the festival together last year. Beeman was close friends with Diskin and Kopp, whom she’d seen a few weeks prior to the concert.

“I only knew Ashley, and now I’ve got three other girls I know better than half my friends I’ve known my entire life,” Kopp said.

The meaning a person takes from a traumatic event such as the shooting will affect the symptoms that person experiences after, said Michelle Paul, director of UNLV’s counseling center, The PRACTICE.

“Depending on your life history, you might have a harder time getting past it,” Paul said.

Kopp has found that to be true. After a rough couple of years, the country music fan hoped the festival would be the getaway she’d needed.

She had wanted to go to the festival since its 2014 inception but never made it for one reason or another. This year, a veterinary bill made the ticket unaffordable — but Beeman had an extra.

“We even had conversations about how we both just really needed this,” Kopp said. “I’m not a big fan of crowds, but country music is my one exception.”

Now she said she’s taking life one minute at a time. “Every morning I wake up, it feels like it’s Oct. 3,” Kopp said. “It’s not the immediate day after, but it doesn’t feel like there’s been any kind of closure.”

She’s anxious and can’t sleep, much like her new friends. Kopp, who lives and works at a wildlife management area about three hours north of Las Vegas, spent the waterfowl hunting opener reminding herself that every gunshot she heard was just a hunter bagging a duck.

Diskin has spent a lot of time crying. The real estate agent hasn’t been able to get much work done.

It comes down to resiliency, Komanduri said. While some people will have nightmares, feel withdrawn or avoid triggering situations following a traumatic experience — all of which are normal responses — others won’t feel those effects.

And in time, the symptoms will subside for most people.

“The majority of folks don’t have long-term problems,” Komanduri said. A 2011 Columbia University study found that while 11.2 percent of New York City residents exhibited symptoms of PTSD after the 9/11 attacks, only 1.5 percent reported symptoms six months after the attacks.

So, Diskin continued, “I’ll just have to be a stronger me, then.”

The night of the concert, the five women sat in lawn chairs to the right of the stage. When the first shots rang out, a woman standing in front of Kopp hit the ground.

Everyone laughed, Kopp said. They thought, as account after account says, the popping sounds were fireworks, so the woman stood up and brushed herself off.

By the second round, the gunfire was clearer, and the women shielded themselves with lawn chairs. By the fourth, they ran — Kopp and Beeman toward the Thomas & Mack Center, where Beeman’s dad picked the two up. Diskin headed toward an opening behind the medic tent, which she remembered seeing Friday when she stopped in for an adhesive bandage.

Tarson and Langlois darted for cover behind a church and then ran inside the Hooters Hotel, where they waited until morning.

Beeman, who said she looks at the event as just a few hours of her life, said she’s just trying to focus on the positives.

“It’s a little hard listening to other people’s stories,” Beeman said. “I have my point of view, and my perspective, and some of theirs were a lot worse.”

Kopp remembers the incident more vividly, recounting scenes of running from the bullets a couple songs into Jason Aldean’s set, crouching at one point behind a truck tire and just waiting for a shooter to find them.

One thing each remembers clearly: They were able to reach one another quickly.

“Which was a relief to know,” Diskin said. “That they were safe.”

Oct. 12, 7 a.m. “The struggle is real this morning ladies,” Tarson wrote in the Facebook group chat. Barely more than a week had passed since the shooting.

“This roller coaster we are all on sucks,” Diskin replied.

Then, words of advice: “(Allow) yourself to feel,” Beeman wrote. Langlois agreed: “Let your emotions out.”

During the Vegas Strong benefit concert Thursday night at Orleans Arena, Diskin, Kopp and Langlois did just that. They greeted one another with smiles and hugs outside the venue, their first reunion since the festival.

Walking through the crowd into the arena, Kopp broke down — the last time she was surrounded by so many people, things didn’t go as planned.

But going to concerts has always been a form of stress relief for the group, and they said they didn’t want to let the Oct. 1 tragedy get in the way of that.

On Thursday night, between tense glances for the exit, the three, joined by friends and spouses, joked around and patted one another on the back.

“There’s a bond here that will never be broken,” Langlois said.