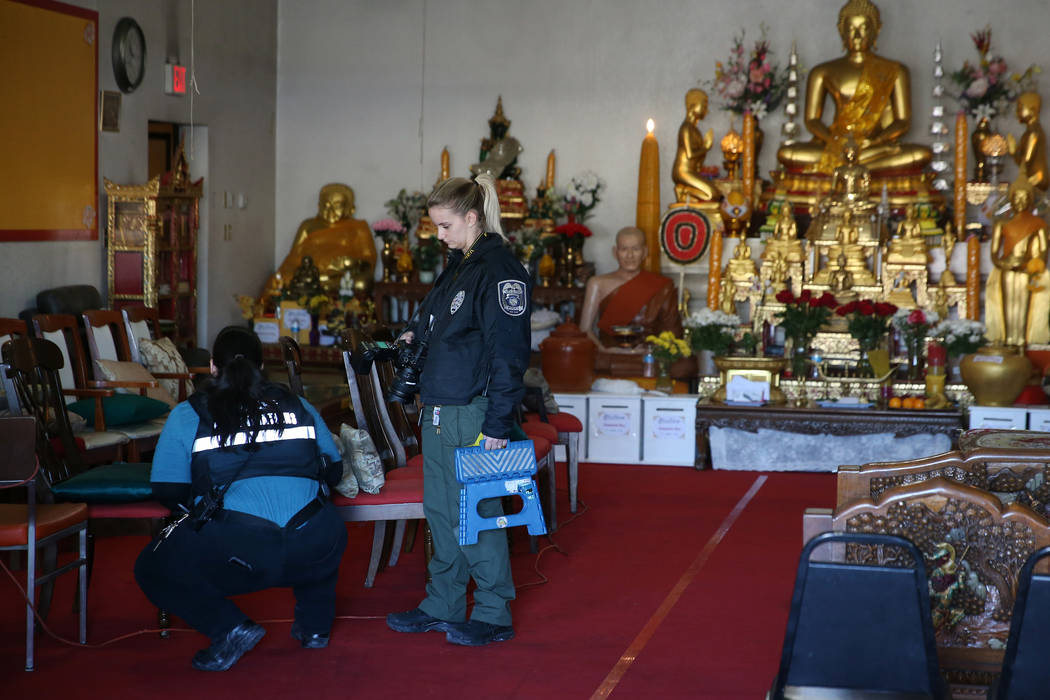 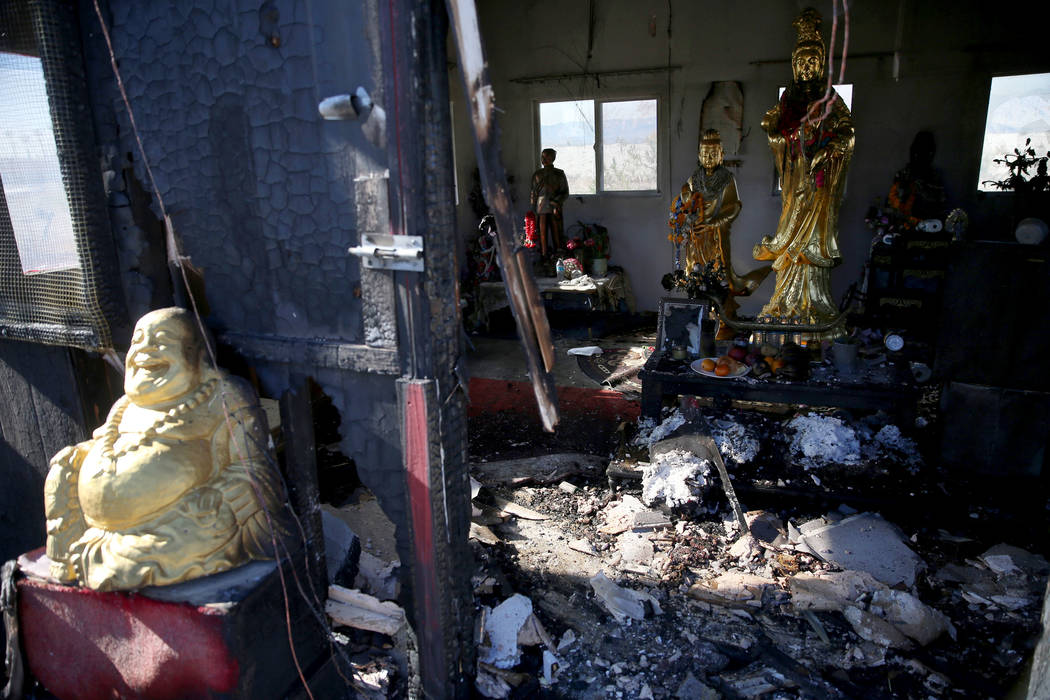 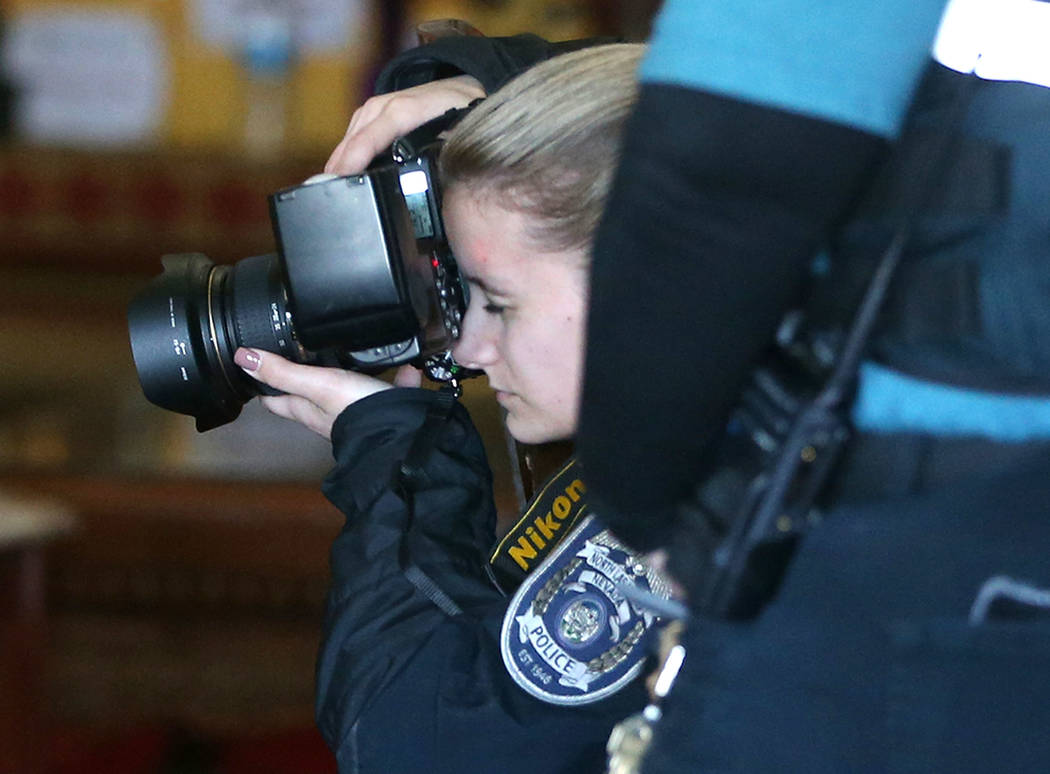 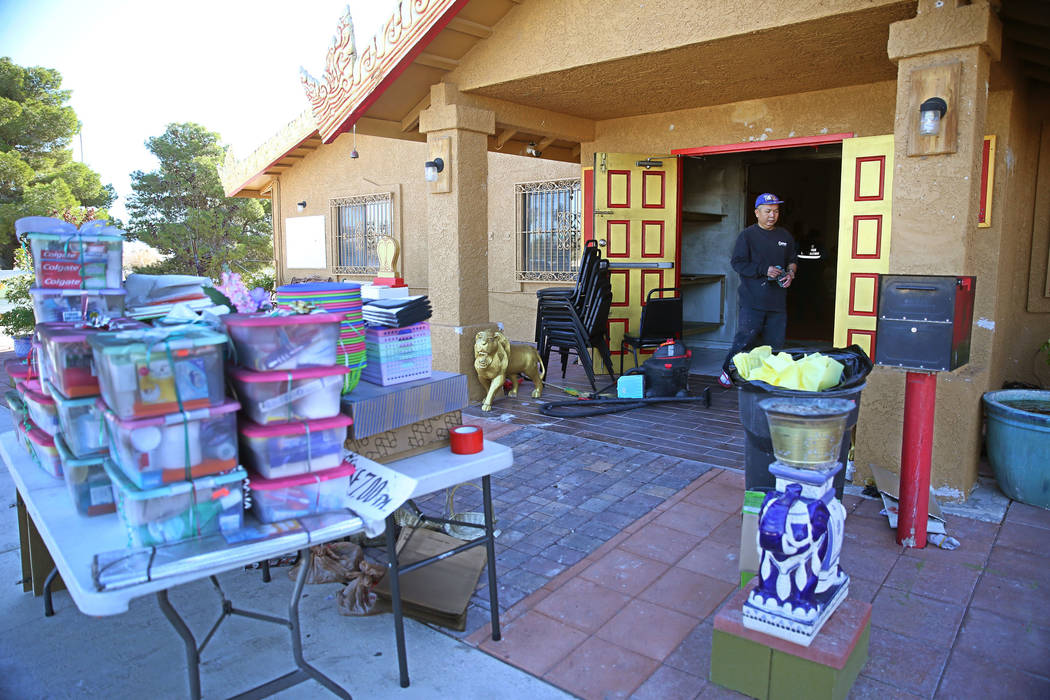 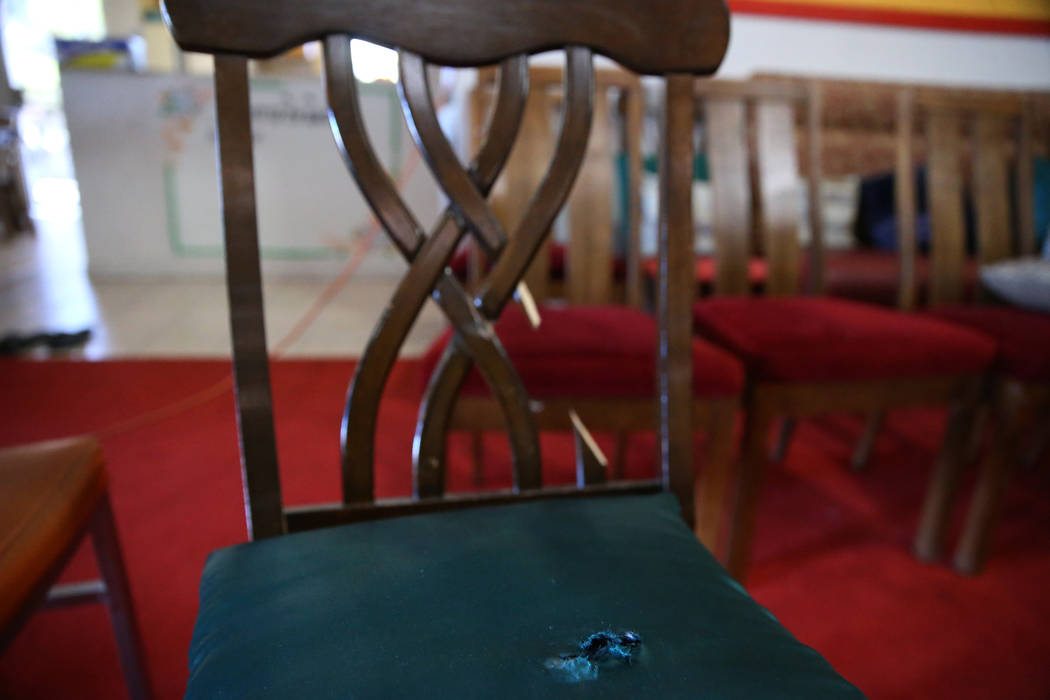 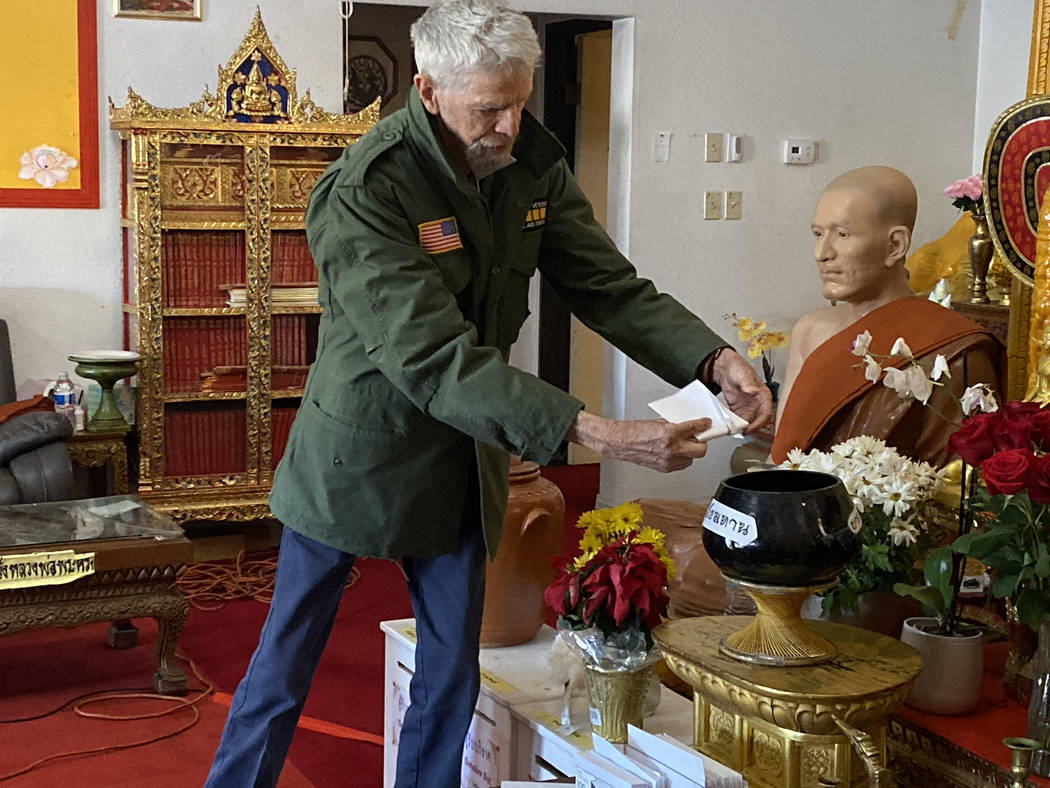 Vietnam veteran James Smales stops by the Thai Buddhist Temple of Las Vegas in North Las Vegas, Tuesday, Dec.17, 2019, to express his support. The temple was damaged by fire Sunday night by an arsonist who yelled "I hate you" as he carried out the attack. (Glenn Puit/Las Vegas Review-Journal)

A man who police say set a North Las Vegas Buddhist temple ablaze and shot at worshipers Sunday twice yelled “I hate you” as he carried out the attack, a witness said.

The witness, who would identify himself only by his first name, Pete, is a worshipper and volunteer at the Thai Buddhist Temple of Las Vegas, 2959 W. Gowan Road. Pete said he was at the temple near Cheyenne Avenue on Sunday evening when the arsonist, identified by police as Derek Debrowa, 38, of North Las Vegas, embarked on a rampage.

“I feel the heat, I saw the fire, like a very bright light outside,” Pete said. “So I opened the window, I saw the fire outside, so I ran and grabbed the fire extinguisher and ran to the front door.”

Pete said he rushed outside and found the western exterior of the temple on fire. He then saw a small prayer building about 15 yards from the temple fully engulfed in flames.

“I’m extinguishing the fire and the guy was shooting at me like four times but the bullet doesn’t catch me,” he said.

Pete ran to the back of the temple to hide. Debrowa came in the front door “and he tried to put gas on the floor.”

“He shoot at a lady, one bullet, and he shout ‘I hate you, I hate you,’” the man said. “After that he light it up … then he walked out the front door.”

Pete said he looked out to the front of the temple and saw a white male wearing a “black jacket carrying a red gas can,” the man said. “That’s all I know.”

Pete said he never saw the assailant’s face but others who were at the temple at the time said they’d never seen him before.

The dramatic account surfaced Tuesday as authorities continued to investigate why Debrowa, who has no local criminal history, set the temple on fire Sunday evening just before 8 p.m. He also set a residence on fire nearby in the 3000 block of Logan Avenue. Authorities said Debrowa then killed himself with a firearm.

The Clark County coroner’s office released Debrowa’s name Tuesday morning. The coroner’s office said he died from a gunshot wound to the mouth. The manner of death was confirmed as suicide.

North Las Vegas police Public Information Officer Eric Leavitt said detectives are trying to pinpoint a motive. Detectives served a search warrant on Debrowa’s residence, the location of which was not immediately disclosed.

Leavitt said police also had no record of calls for service at Lebrowa’s residence.

Leavitt said part of the investigation will try to discern if there is any connection between the Sunday fire at the temple and an Oct. 25 fire at the Nevada Buddhist Association building in the central Las Vegas Valley. The cause of that fire remains under investigation by the Bureau of Alcohol, Tobacco, Firearms and Explosives and the FBI because it happened at a house of worship.

Spokesmen for the FBI in Las Vegas and the ATF in San Francisco did not immediately respond to a request for comment.

On Tuesday afternoon, a handful of volunteers and worshipers at the temple on Gowan showed up to assess the damage as detectives took photos and continued to process the crime scene. The main interior of the building remained intact and did not appear to be badly damaged.

Still, the remnants of the violence lingered. A chair with a seat cushion pierced by a bullet was observed and photographed. One of the people who showed up at the temple was concerned citizen James Smales. The veteran, who served three tours in Vietnam, showed up to express his support for worshipers at the temple.

“I heard about the fire and wanted to see if there is anything I could do, so I came to make a small donation,” Smales said, slipping a $100 bill into a donation jar.

“I just can’t believe someone would be, so much hatred, that they would burn down the temple like this,” Smales said. “It is the very least I can do.”