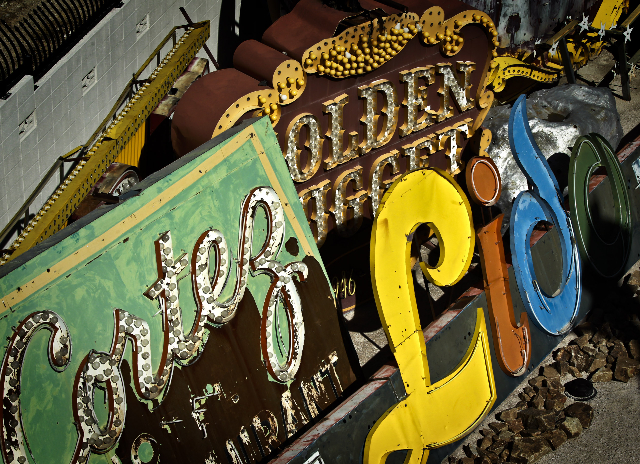 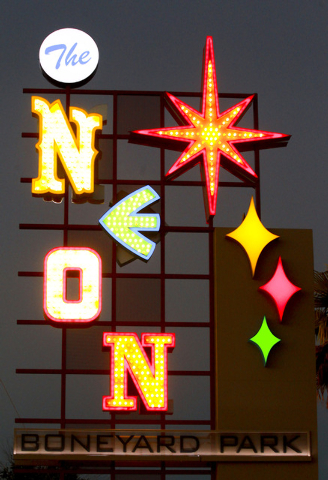 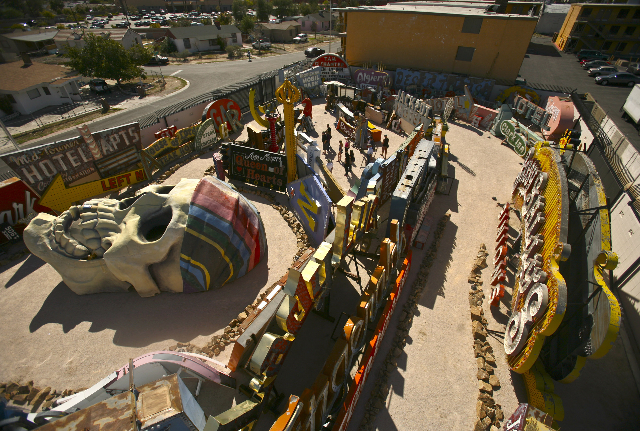 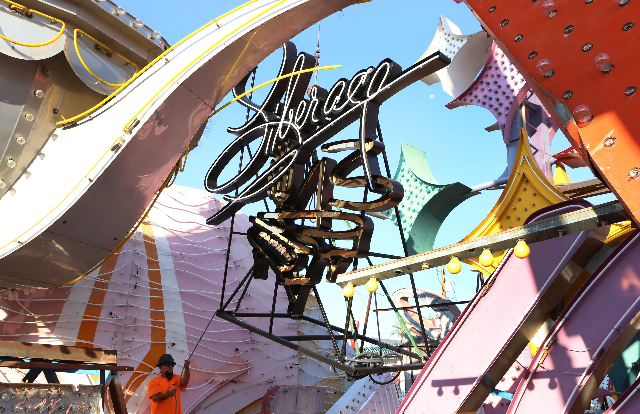 Larry Hernandez, left, of Jones Sign, holds the rope as he lowers a newly restored sign from Liberace Museum at The Neon Museum where it joined their existing Boneyard collection, on Friday, Sept. 12, 2014, at 770 N Las Vegas Blvd., in Las Vegas. Shulman Family Foundation paid for the restoration of the sign. (Bizu Tesfaye/Las Vegas Review-Journal) 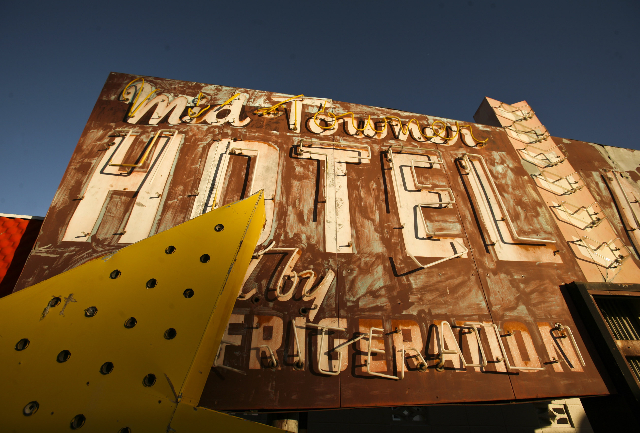 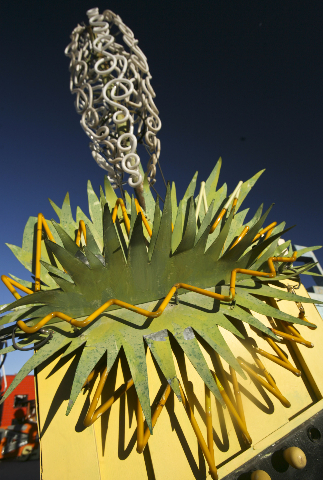 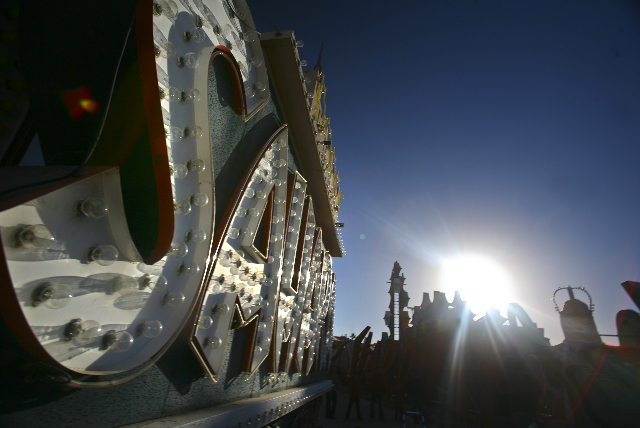 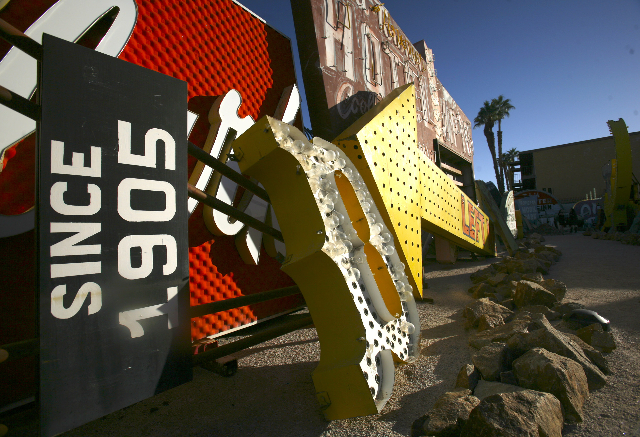 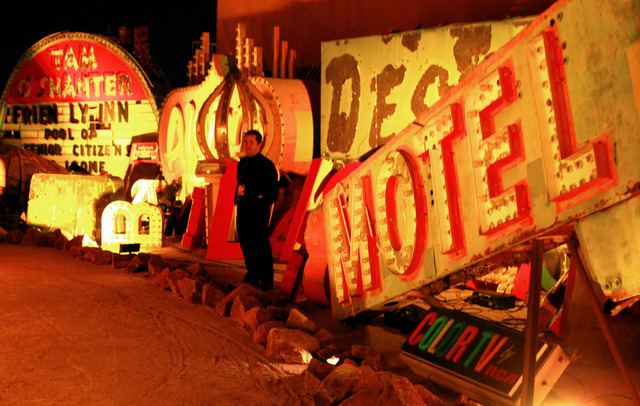 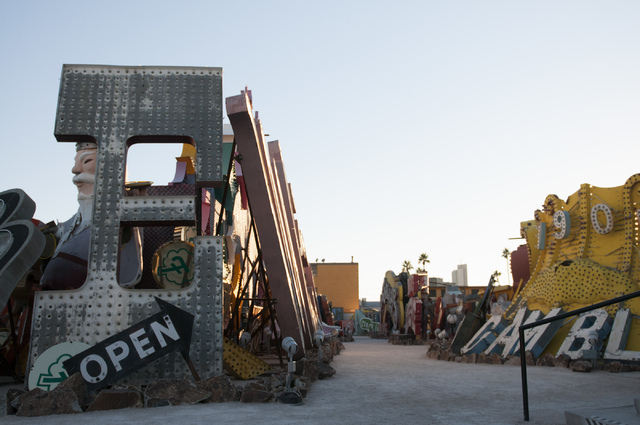 Signs are seen at the Neon Museum during a tour on Friday, Nov. 1, 2013, in Las Vegas. The museum is celebrating its one-year anniversary. (Erik Verduzco/Las Vegas Review-Journal) 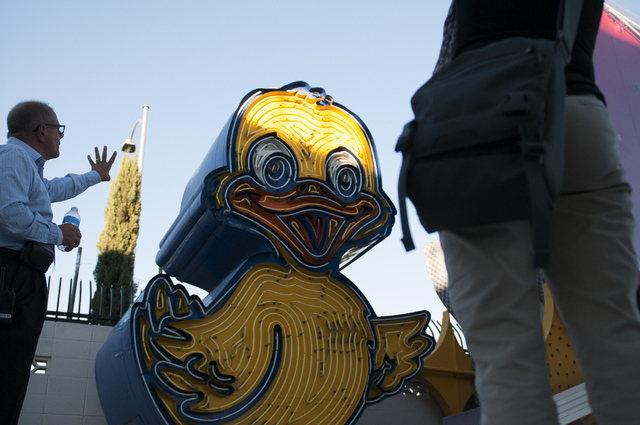 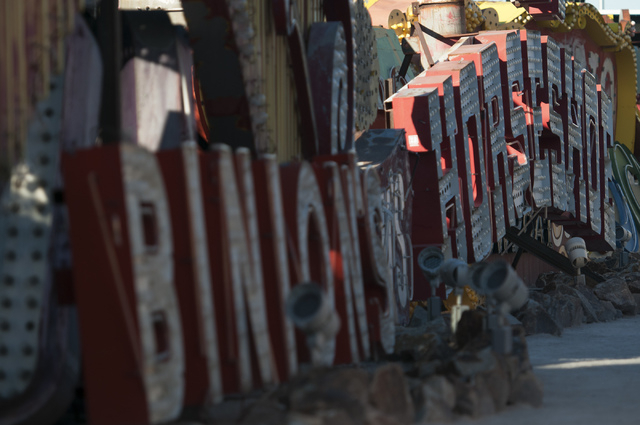 The old Binion‘s Horseshoe sign is seen at the Neon Museum during a tour on Friday, Nov. 1, 2013, in Las Vegas. The museum is celebrating their one-year anniversary. (Erik Verduzco/Las Vegas Review-Journal) 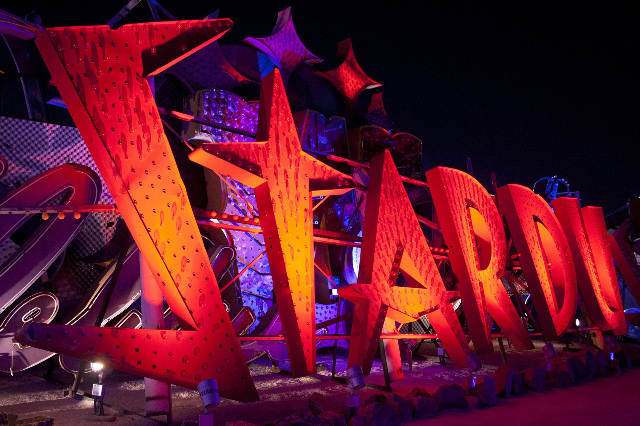 The Neon Museum has the largest collection of vintage neon signage in the world and is a unique record of Las Vegasu2019 colorful history. Featuring more than 150 unrestored signs within a two and a half acre outdoor exhibition space known as the Neon Boneyard, the Neon Museum offers guided tours seven days a week, both during the day as well as in the evening. For more information, please visit www.neonmuseum.org. (Photo courtesy of the Neon Museum.) 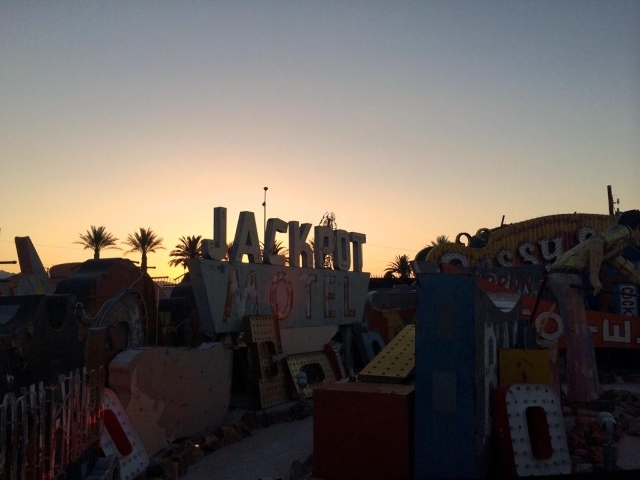 The sun sets over the Neon Boneyard on Feb. 17, 2015. (Stephanie Grimes/Las Vegas Review-Journal)

As rapid as a new Las Vegas landmark is constructed, another one is demolished. Memories of those attractions continue to shine bright at the Neon Boneyard Museum.

Providing visitors with a trip down memory lane, the Neon Museum takes guests on a stroll through vintage Vegas by preserving retired neon signs from Las Vegas’ glittering past.

From a sign that once stood atop the first interracial resort in Las Vegas, the Moulin Rouge, to Aladdin’s Genie Bottle from the now-extinct Aladdin Casino, the Neon Boneyard Museum helps document Sin City’s roaring history.

Here are seven things you might not have known about the Neon Boneyard Museum:

According to the Neon Museum, one of the oldest signs in the Boneyard is the Green Shack sign from the 1930’s. The sign, which advertises chicken, steak and cocktails, can’t be much older as Prohibition was not repealed until December 1933.

It’s been around for a while, but not as long as the signs

What was the first to be restored?

The first sign restored by the Neon Museum was the Hacienda Horse and Rider sign. To mark their “official opening,” the museum installed the restored sign at the intersection of Las Vegas Boulevard and Fremont street.

The signs are a lot bigger than you think

One of the most world-famous signs in the museum, the Stardust sign, was 188 feet tall and 96 feet wide. Rich in star-power, the Stardust, which was a frequent stop for entertainers such as Frank Sinatra and “the Rat Pack,” remained a Las Vegas mainstay from it’s opening in 1958 to its demolition in 2007.

The building is historic, too

The museum’s visitors’ center is housed inside the former motel lobby of the La Concha Motel. Recognized by its distinctive clam shell-shaped roof, the motel, which was originally constructed in 1961, formerly sat on Las Vegas Boulevard South next to the Riviera Hotel. In 2006, the lobby was spared from destruction and moved to it’s current home in eight separate pieces. It was completely reassembled in May 2008.

Their lease is (extremely) cheap

The Neon Museum sits on land that is leased to them by the city for $1 a year. After many failed attempts to “save our neon,” the city stepped up and helped create the museum. Now, the museum is an independent operation with its own non-profit status.

From photo shoots, educational programs, special events and private or regular tours, during the 2015 fiscal year, 85,163 visitors have strolled through the relics of Las Vegas history at the Neon Boneyard Museum.