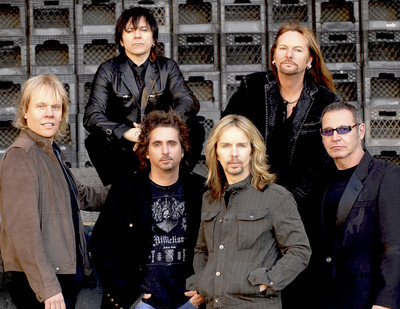 Which of these is the strangest in 2008?

• Members of Styx looking out from the stage at more than 9,000 people. (It’s not a flashback, dude.)

• Seeing a concert at the Thomas & Mack Center, period.

It’s pretty much a pick-’em. All three are noteworthy with Saturday’s Styx and Boston double feature, where promotionally priced $25 tickets mark an early celebration of the Thomas & Mack Center’s 25th anniversary.

The durable arena opened on Dec. 16, 1983, with a benefit featuring Frank Sinatra, Dean Martin and Diana Ross. The arena’s current director, Daren Libonati, says the timing for a classic rock show obviously is better on a hot summer night than right before Christmas, plus it leaves room for future events to extend the celebration.

Saturday’s nostalgic promotion has paid off with advance sales of more than 9,000 tickets, Libonati says, compared to pre-sales of 3,500 or 4,000 in markets charging a more usual $60 or more. Managers for the bands are "absolutely just ecstatic to know they’re going to step out onstage in front of (as many as) 11,000 people. They probably haven’t seen that since the ’80s," he says.

It hasn’t been quite that long since the Thomas & Mack hosted so many butane lighter-flickers for a power ballad. But Libonati does have trouble recalling the last big-name concert act to grace the arena. Musical events gradually tapered in the past 15 years, as three casino-connected arenas were built within four miles.

For a good 10 years, the Thomas & Mack pulled Las Vegas into the modern-era concert industry with shows that included U2 and Guns N’ Roses. Things started to change after the MGM Grand Garden — private enterprise, offering top dollar to primo concert acts — opened in 1993.

The arrival of the Mandalay Events Center in 1998 left even less room to wiggle. By 2002, concert scores such as Eminem came as hand-me-downs from casinos that found their audiences distasteful or too hard to manage. And in 2003, the Orleans Arena brought competition for even locals-oriented attractions such as Disney on Ice and the Ringling Brothers and Barnum & Bailey Circus.

"We can choose to chase shows, but in the last two years, we’ve really elected not to, just because the risk-reward (ratio) is so tough," Libonati says of concerts. "Sometimes the chase isn’t worth it."

Occasional windfalls do come the arena’s way, such as "American Idols Live!" on July 5. But for the most part, "If you’re spending 90 percent of your time chasing shows, and you’re only getting 10 percent of them, you’re probably better redirecting your energy and creating shows, like we’re doing here," he adds.

The Thomas & Mack still ranks near the top of the heap for annual ticket sales by a trade publication, Venues Today. The rankings don’t factor in college athletics, but do allow the arena to count revenues from pro events such as the National Finals Rodeo each December.

But guess what? Plans continue to move forward for yet another arena, a 20,000-seater built and operated by AEG Live on vacant land just east of Bally’s. (An AEG spokesman says the company will "update the development timeline" within the next few weeks.) If and when that arena goes up, the NFR likely will defect.

"Certainly, we would like the option of a new arena," says Pat Christensen, who helmed the Thomas & Mack until 2001, and now heads Las Vegas Events, which produces the rodeo. While the idea of four arenas can seem ridiculous from a civilian perspective, no current ones offer the new deluxe standard in VIP boxes, needed to snare the big corporate money as the NFR grows on a Super Bowl-like trajectory.

On the Thomas & Mack Center’s opening night, Sinatra told the crowd, "I hope this wonderful building lasts a thousand years. It should spur the (Runnin’ Rebels) team to win 400 games a year."

Only 25 years later, the arena already has weathered — and apparently beat back — talk of a tear-down. "The Thomas & Mack, for celebrating its 25th anniversary, certainly works very well as an arena," Christensen says. "In terms of the sight lines and seats, we’re going to have a hard time topping that with a new arena."

A big face-lift in 1998 included the adjacent Cox Pavilion for smaller events. Even if "Come Sail Away" seldom echoes through the tunnels any more, the roar of "Walking With Dinosaurs" or the thundering hooves of FEI World Cup horse jumping keeps the concourse busy.