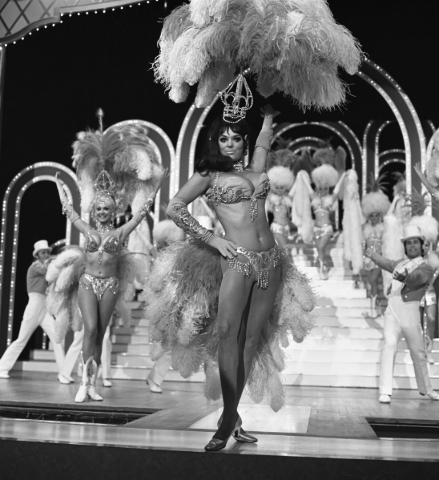 The Las Vegas showgirl may be an endangered species — and about to go all but extinct when Bally’s “Jubilee!” the last of the Strip’s showgirl spectaculars, closes in February.

Starting next June, however, locals will be able to relive those glittering, glamorous days of yesteryear, thanks to an upcoming collaboration between the Las Vegas News Bureau and the Nevada State Museum, Las Vegas.

An exhibit celebrating the Tropicana’s long-running, long-gone “Folies Bergere” will feature costumes from the show, which the Tropicana donated to the museum last year, accompanied by photographs from the news bureau’s extensive archives.

Developing the exhibit is “so exciting,” according to Ginny Poehling, the news bureau’s media services manager, who’s reviewing about 6,000 images while preparing the display.

In some cases, the exhibit will match costumes — from shoes to those towering headpieces — to news bureau photographs showing performers wearing them.

After all, when news bureau photographers shot their images, only two pictures might have been used for promotional purposes, leaving many photos more unseen for decades, Poehling explains.

In conjunction with the exhibit’s debut, panel discussions featuring locals who worked in the “Folies” will be held at the museum, she adds.