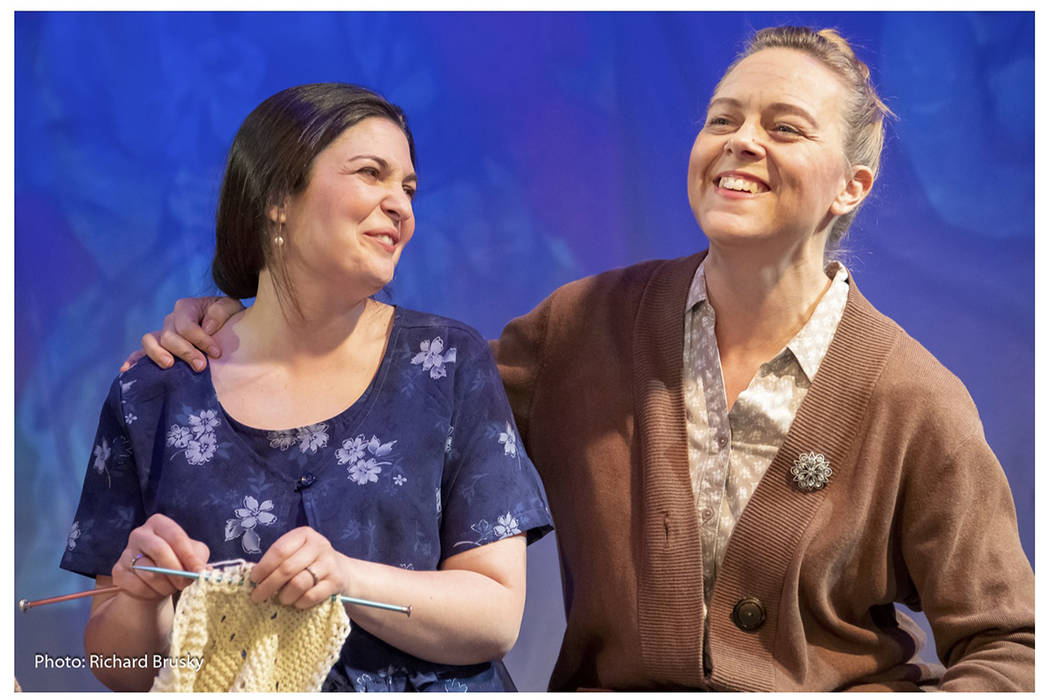 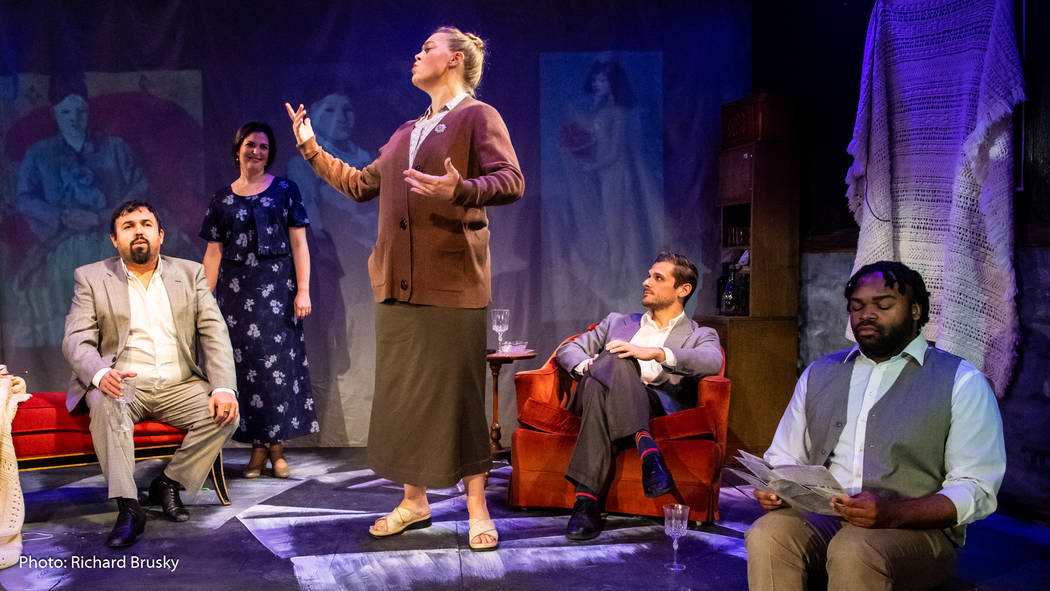 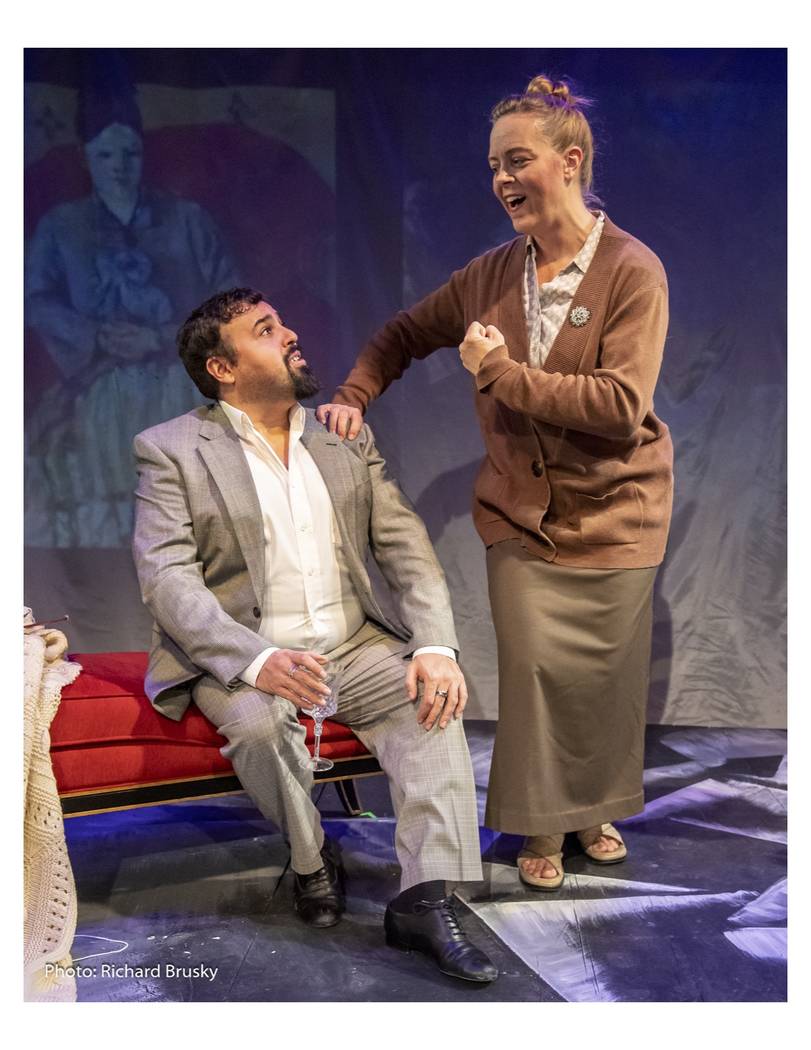 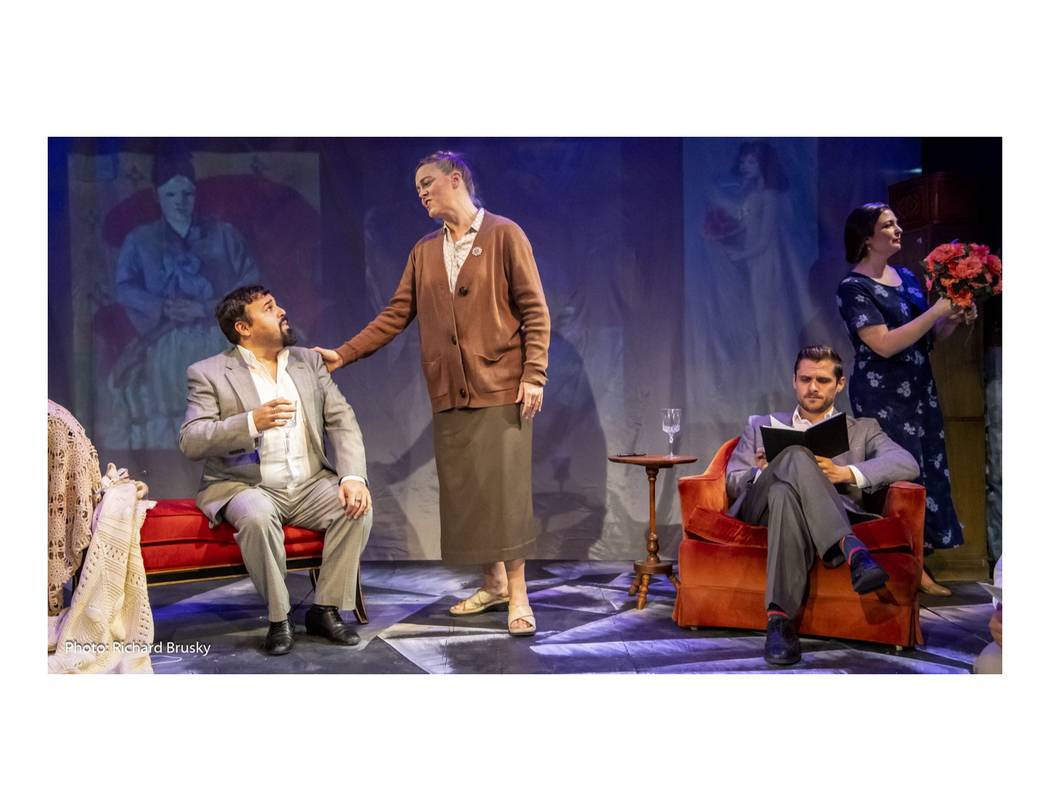 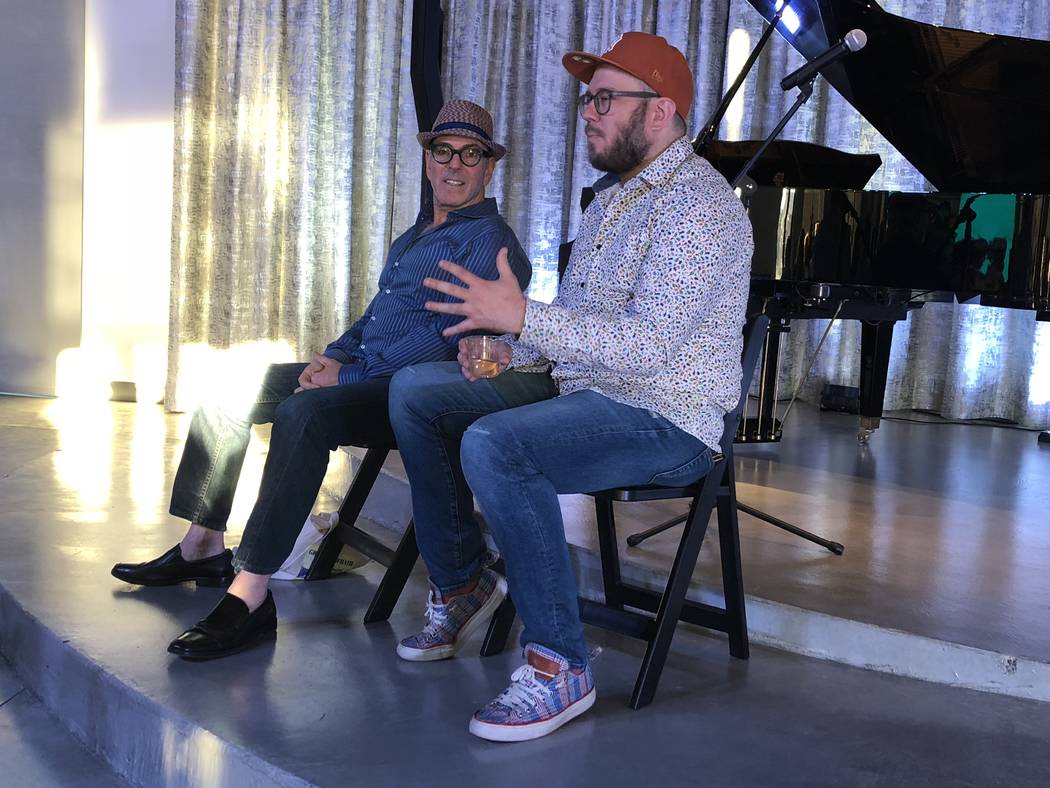 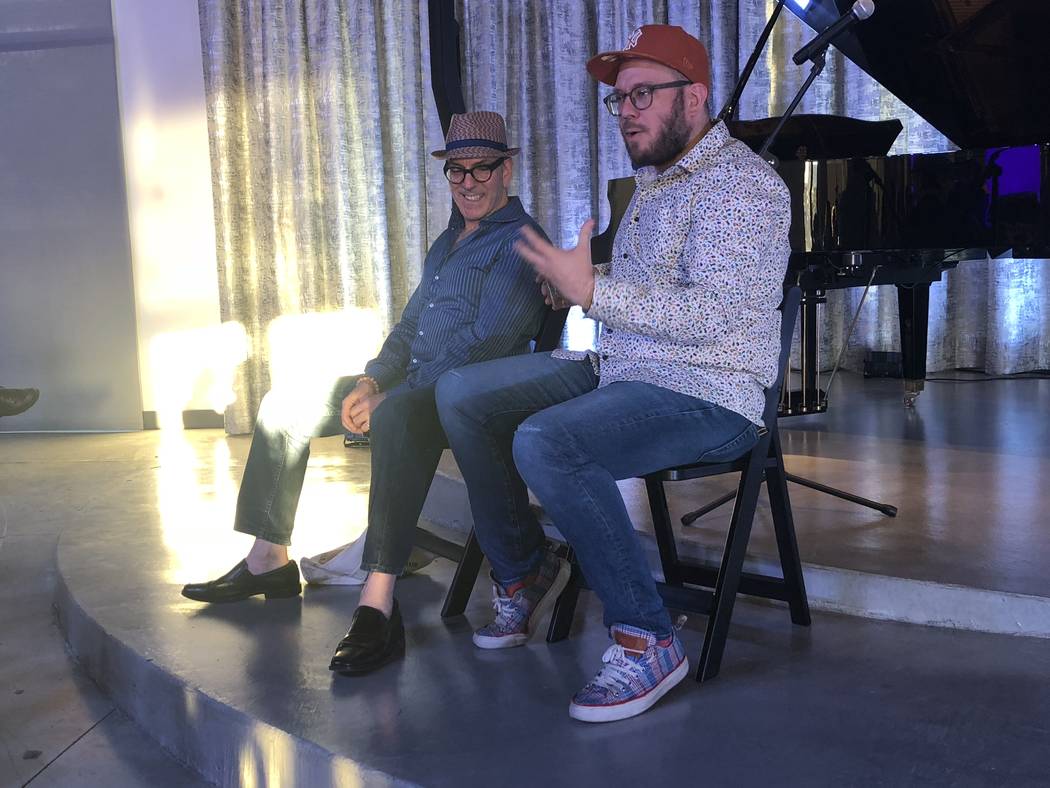 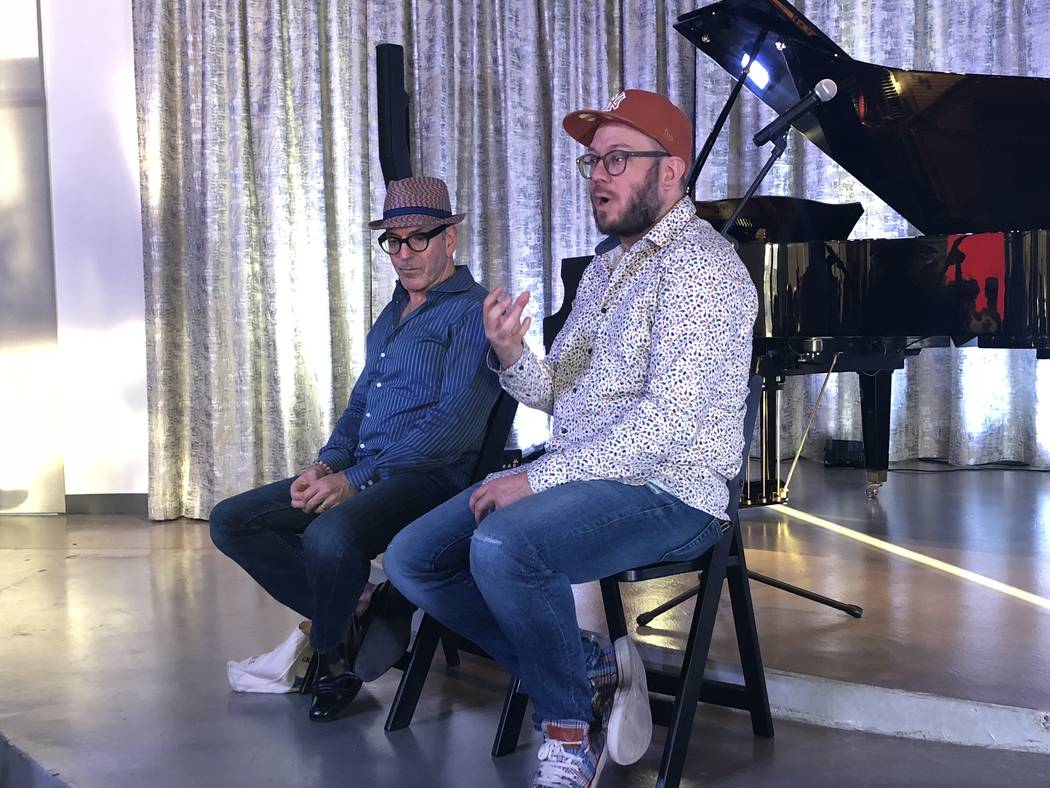 It was in cozy rooms not unlike this one, filled with artists, discussion and performance, that Gertrude Stein had hosted her famous salons at 27 rue de Fleurus in the early 1900s.

In the home she kept with her wife, Alice B. Toklas, she befriended and mentored the likes of Pablo Picasso, Henri Matisse, Ernest Hemingway and F. Scott Fitzgerald.

Stein’s life has inspired Ricky Ian Gordon both in life and in music. Alongside librettist Royce Vavrek, he composed “27.” The opera presents a portrait of Stein and celebrates her salons and relationships.

Gordon and Vavrek presented the West Coast debut of their opera last week at Cockroach Theatre in Las Vegas. It continues with three performances this weekend.

Fittingly, they introduced the piece with a salon of their own at Stinko’s in the Arts District.

Seated in front of a grand piano in the flower shop, Gordon and Vavrek walked a rapt audience through the conception of their critically acclaimed opera.

“I read a book about her life when I was at Carnegie Mellon,” Gordon said. “I was mesmerized by her world.”

In pursuit of replicating Stein’s unwavering self-assurance and penchant for artistic expression, Gordon took up collecting art. By the time he left school, he had constructed a salon of sorts in his New York apartment.

A friend introduced him to Vavrek and he offered Vavrek the role, on the condition that he read 15 books about Stein and complete the libretto in six weeks.

“We wrote this when everything was happening with gay marriage,” Vavrek said. “One year prior to it being legalized.”

“I wanted to celebrate the salon,” Gordon added. “And one of the most beautiful relationships of the 20th century, a beautiful gay relationship.”

Vavrek says that he adopted Stein’s repetition and tone in his writing. The first draft read like she had written it.

“All writers need that,” Vavrek said. “Permission to write as themselves.”

Vavrek honed in on Alice’s knitting as a motif that weaves through the story.

“27” opens with the prologue “Alice knits the world.” She sits on the stage, reciting “knit one, purl one,” in a Stein-inspired repetition.

The story touches on famous moments in Stein’s life including the relationship and eventual falling out with her brother and the cast of characters who often lingered in her living room.

While Stein, portrayed by Las Vegas singer Kimberly Gratland James, croons “peruse,” she invites her houseguests — and her audience — to scan the walls.

The Cockroach Theatre is outfitted with replicas of Picasso and Matisse’s works. A projection element cycles artworks in and out of the salon.

Jim Sohre, Opera Las Vegas’ artistic director, first saw “27” at its 2014 debut. He reviewed the opera favorably, saying “A hit is a hit is a hit” in Opera Today.

“27” was originally staged in St. Louis with a 39-piece orchestra. In Las Vegas, two pianos accompany the cast of five Las Vegas performers through the five short acts.

“It’s perfect for a smaller, intimate venue,” Gordon said of the 99-seat theater.

Vavrek added that “27” is a good pick for opera newbies. “It’s very entertaining. Ricky is legendary with art and musical theater and opera. It feels contemporary and vital.”

In the opera’s second scene, Stein sits for Picasso for the hundredth time, recreating a famous moment where Picasso is distressed because he can no longer see her face in the portrait he is creating.

Stein laments that she wishes she could paint a portrait. Alice assures her that she can.

In a line that almost certainly rings true for both Gordon and Vavrek, she tells Stein that she creates portraits with scribbles and scrawls.

Stein agrees, “I can create a portrait with words.”

On Friday, Mayor Carolyn Goodman proclaimed April 27, 2019, as “27” Day in Las Vegas in honor of the premiere.