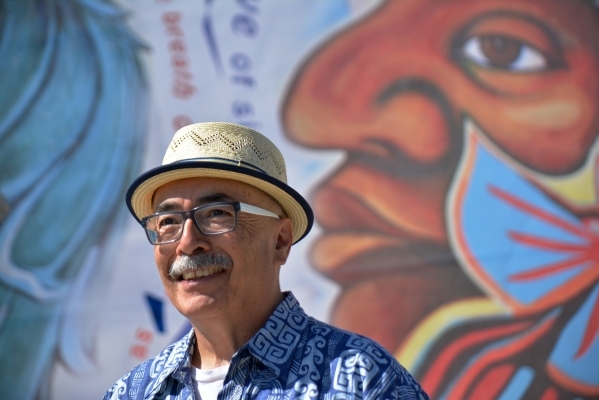 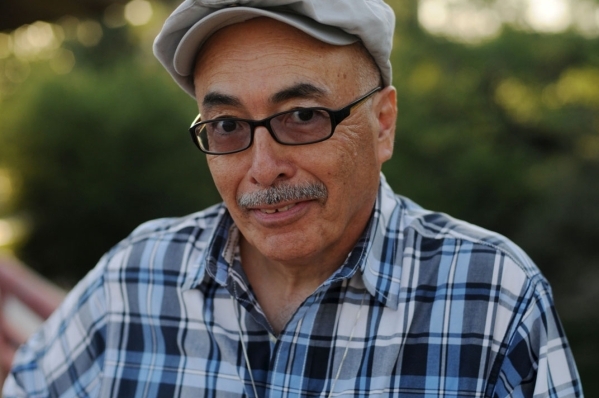 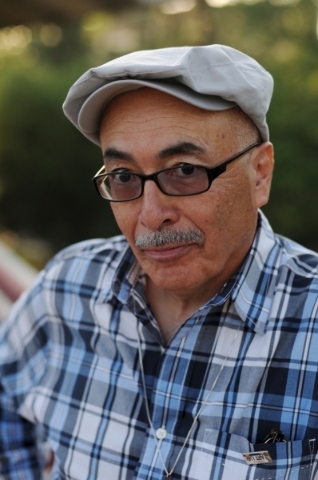 When poet Juan Felipe Herrera was a boy, he learned to find beauty everywhere.

For fun, his family would walk 10 blocks to the bus depot in the evenings, window shopping along the way saying, “Oh look at the tattoo parlor — Popeye and anchors and sailboats and skulls. And we’d pass by the pawn shop, and look at those beautiful hummingbird Gibson 10-string guitars with the sunburst finish. Ah, yeah, look at that saxophone. It’s sparkling like melting gold…

Now Herrera is the one going places. The Library of Congress named him the 21st U.S. Poet Laureate June 10. He launched his term participating in the Library of Congress’ National Book Festival on Sept. 5 and opened the library’s literary season reading at the Coolidge Auditorium in Washington, D.C., on Sept. 15. Speaking by phone from a stop in Virginia he said the schedule is hectic, but exciting.

“You would think poetry leaves you a lot of time to relax, but it’s a lot of work,” he said. “I won’t be home until the end of the month. Then I’ll be in for three days, and then back I go and get on a plane again. Planes, hotels and trains — that’s my life right now.”

One of those planes is set to bring Herrera to the Las Vegas Valley Saturday for a 3 p.m. poetry workshop at the Clark County Library, 1401 E. Flamingo Road, and a 7 p.m. reading at Nevada State College, 1081 E. Paradise Hills Drive in Henderson.

“What a great opportunity this is for us as individuals, as artists, as a community,” Isaacson said.

Herrera isn’t the only sitting U.S. Poet Laureate to visit Clark County. Then-Poet Laureate Kay Ryan was a keynote speaker at the 2009 Vegas Valley Book Festival. But as the nation’s first Hispanic poet named to the post, Herrera’s visit is a big deal to a county where approximately a third of the population is Hispanic. Isaacson said Herrera’s work has expanded beyond the Hispanic experience to embrace refugees and immigrants all over the world.

“There are people enduring tremendous suffering, and he identifies with them and tries to bring their voices into literature,” Isaacson said.

Hererra has his own experience with hardship. His parents were migrant farm workers when he was born in 1948 in Fowler, Calif., and at 29 days old, he joined them on the road. He describes their journeys in his children’s book “Calling the Doves.”

“Wherever we stopped, we set up a carpa — a tent.” he wrote. “My father would pull out a thick green canvas, like a giant tortilla dipped in green tomato sauce. Mama would unroll it while we looked for branches to pin the ends to the ground. We slept huddled together under blankets and quilts. I would look up and see the stars sparkle through the tiny holes of the canvas.”

The family settled down so he could attend school in San Diego. First- and second-grade were rough as he worried his tongue would turn to rock when he attempted English. But in third-grade his life was transformed by Lucille Sampson, a teacher who asked him to sing for the class.

“And the magical thing was that she turned around … And she said, ‘You have a beautiful voice.'” Herrera’s friend had to translate the phrase.

“And I could not believe it, even in Spanish,” he said. “So that was the beginning of my life as a poet, a speaker and just a human being more than anything else, as a complete human being.”

That transformation continued as he studied anthropology at the University of California, Los Angeles and Stanford, and received his Master of Fine Arts from the University of Iowa Writers’ Workshop. Inspired by activists such as Martin Luther King Jr., Dolores Huerta and Cesar Chavez, he got involved in the Chicano Poetry Movement in the late ’60s and early ’70s.

His more than a dozen poetry collections include “187 Reasons Mexicanos Can’t Cross the Border: Undocuments 1971-2007,” “Half of the World in Light: New and Selected Poems” and his most recent “Notes on the Assemblage.” He has also written books for children, novels for teens and nonfiction works such as the 2014 release “Portraits of Hispanic American Heroes.”

He hopes to see Nevadans contribute work to his poetry project, La Casa de Colores, the House of Colors, a place for all voices. He plans to announce ongoing themes and invite writers of all skill levels to contribute two lines of poetry to be compiled into an epic poem. To contribute, visit loc.gov/poetry/casadecolores.

He also invites Nevadans to help him answer the big questions: How do you live a life of poetry? How do you make poetry? What on earth is it for?

“And more of a Groucho Marx question would be, ‘Why is it so boring?'” he said.

Isaacson is willing to bet Herrera’s visit will be anything but boring.

“I think we’re going to get a real treat,” he said. “I just couldn’t be more excited for our community.”

Are you an optimist? Your health may depend on it