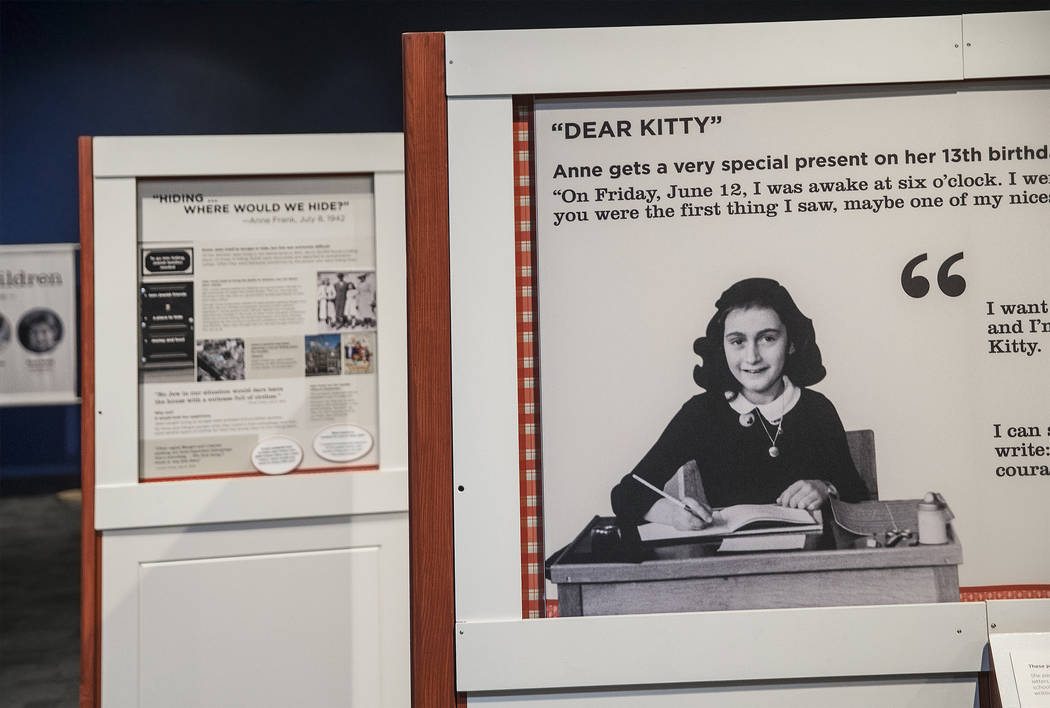 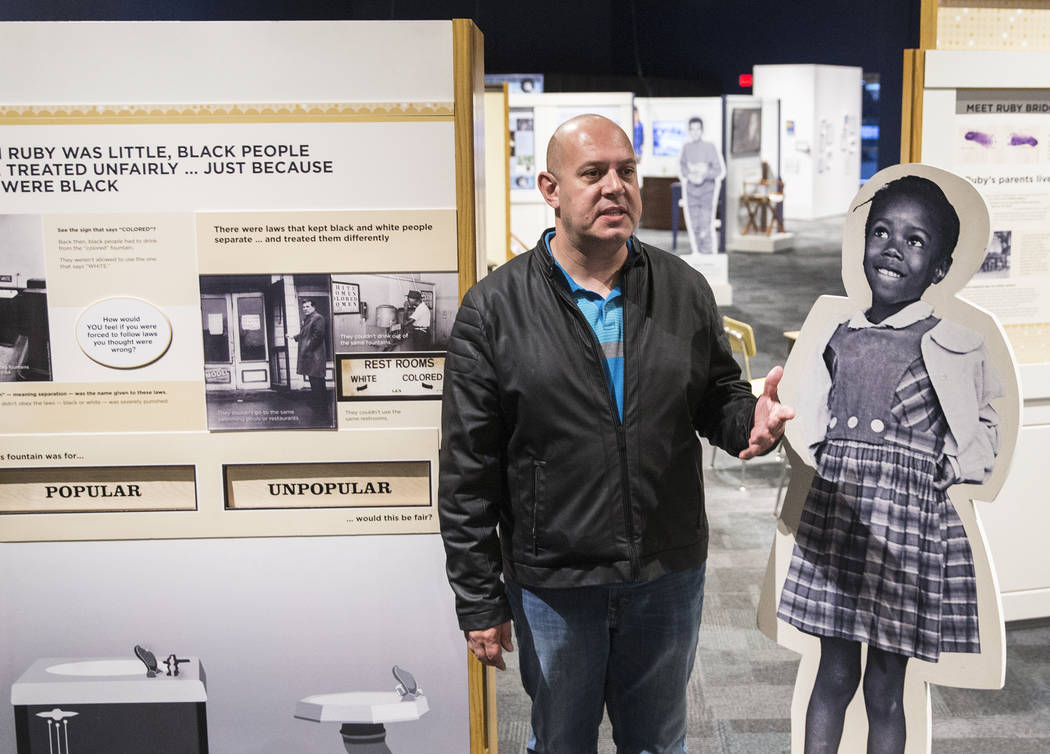 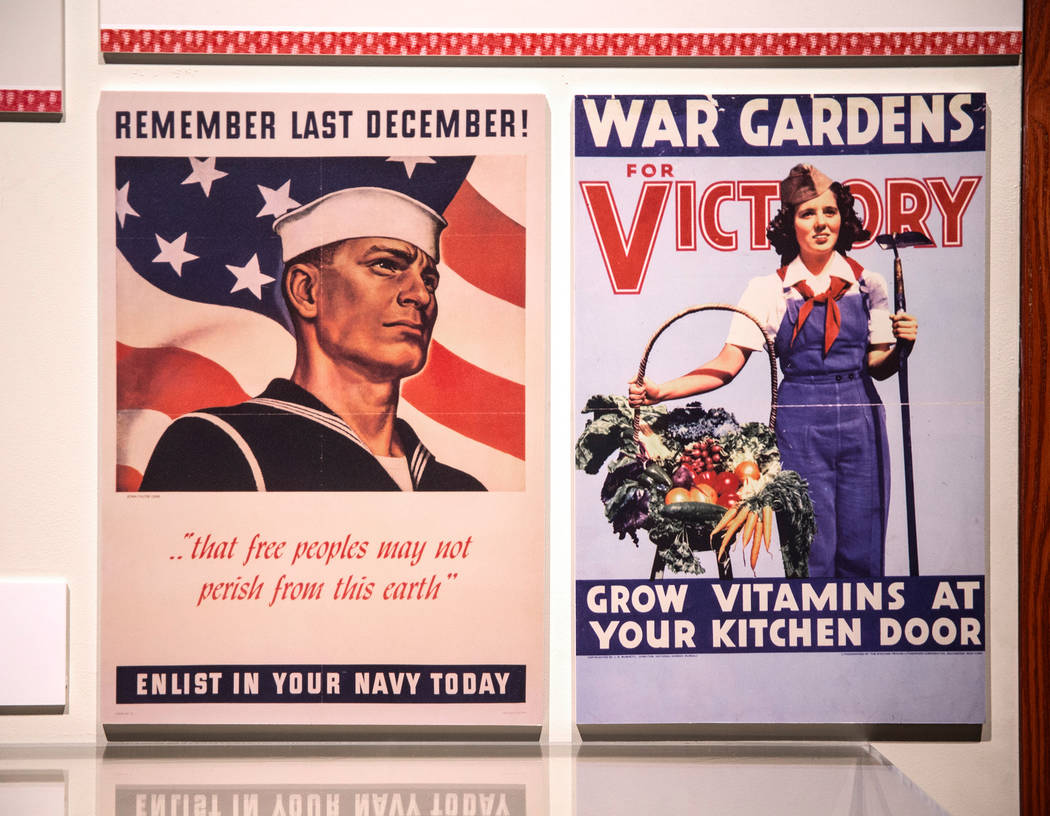 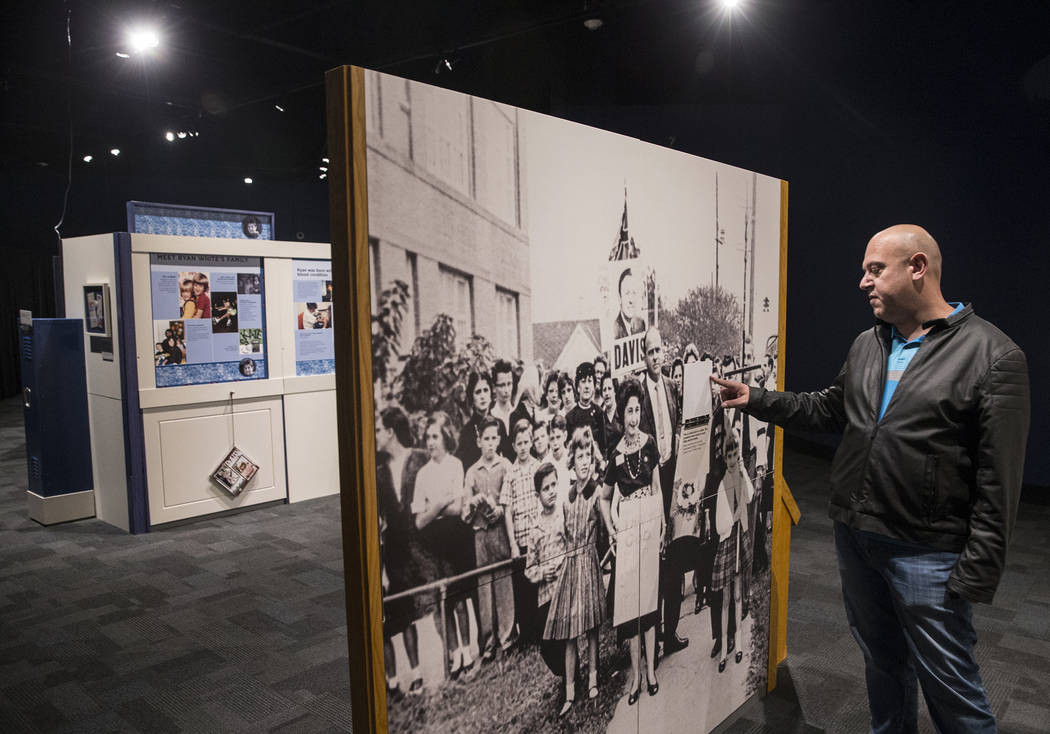 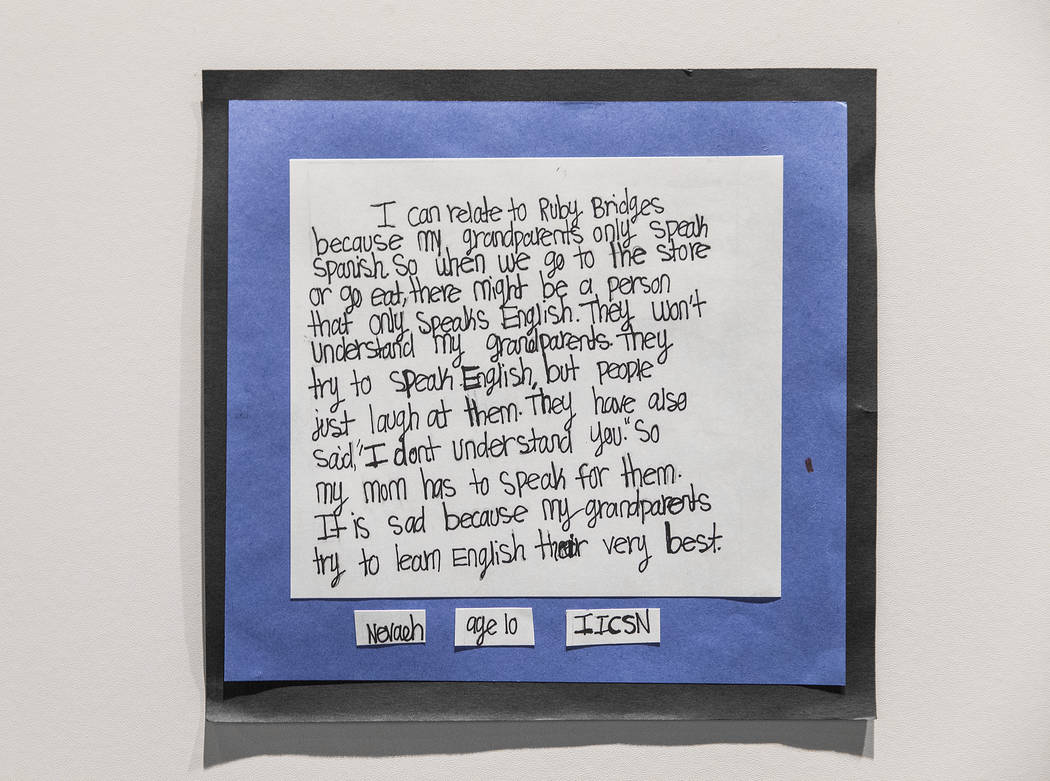 A letter from a 10-year-old Nevada student explaining how they can relate to the struggles of Ruby Bridges is displayed at the new Springs Preserve exhibit, &quot;The Power of Children&quot; on Wed., Dec. 13, 2017, in Las Vegas. At age 6, Bridges became a symbol of the civil rights movement when she enrolled at the previously all-white William Frantz Elementary School, in New Orleans, La. Benjamin Hager Review-Journal @benjaminhphoto 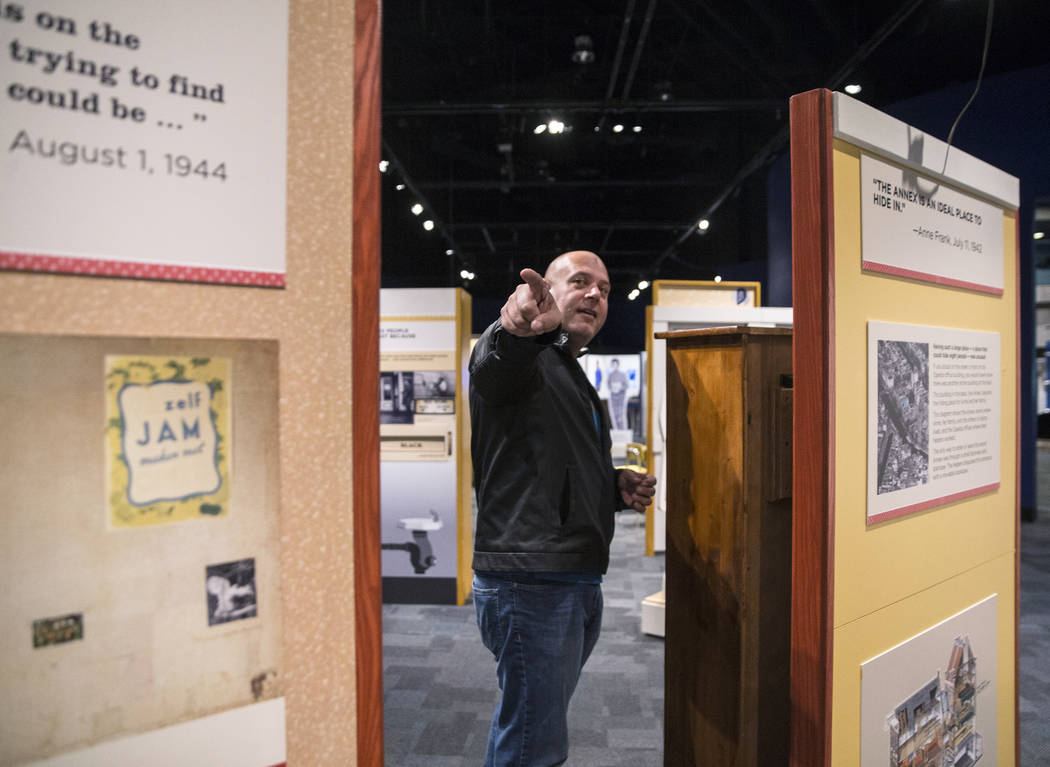 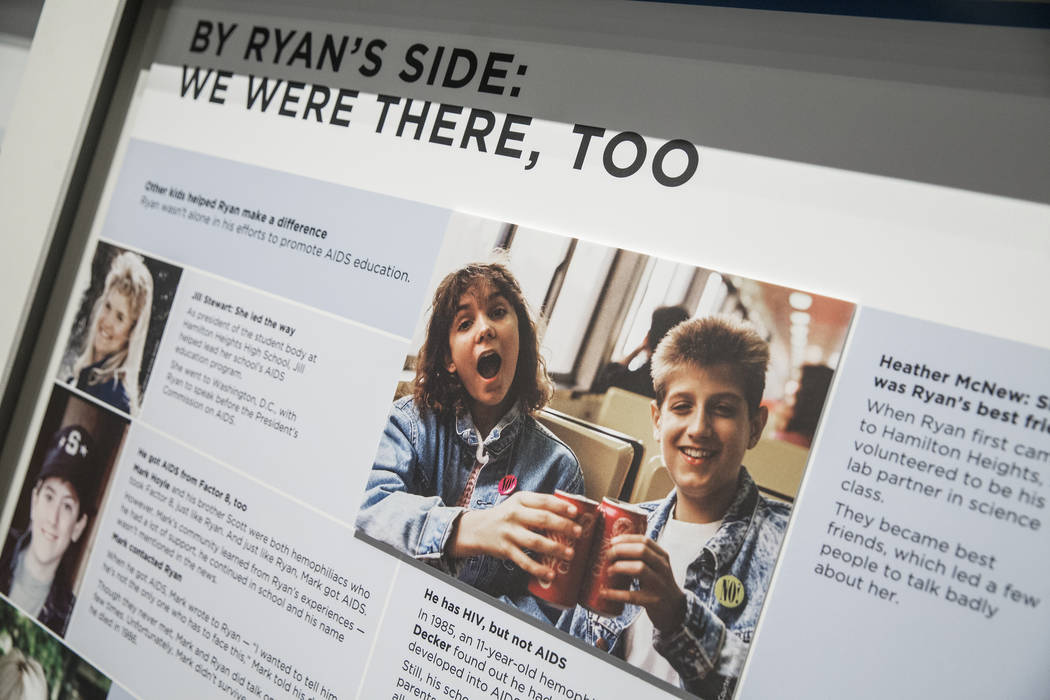 A display outlining Ryan White's story at the new Springs Preserve exhibit, &quot;The Power of Children&quot; on Wed., Dec. 13, 2017, in Las Vegas. White was an Indiana teenager who gained national attention after an HIV/AIDS diagnosis caused him to not be re-admitted to school. Benjamin Hager Review-Journal @benjaminhphoto 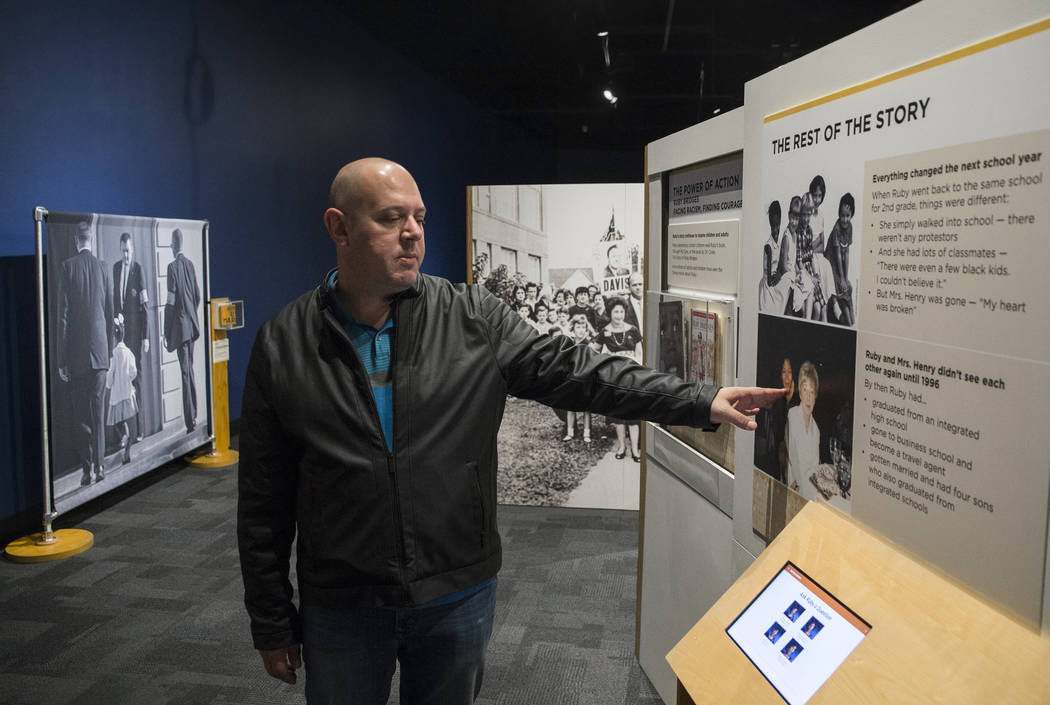 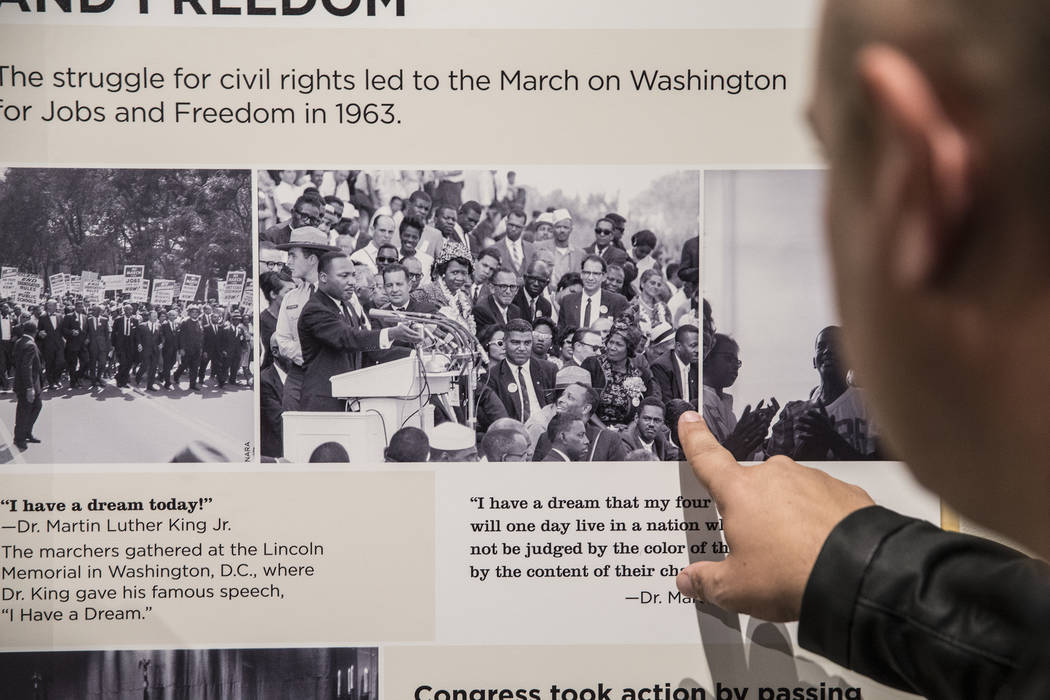 Curator Aaron Micallef gives a tour of the new Springs Preserve exhibit, "The Power of Children," which focuses on the impact of Anne Frank, Ruby Bridges and Ryan White on Wed., Dec. 13, 2017, in Las Vegas. Benjamin Hager Review-Journal @benjaminhphoto 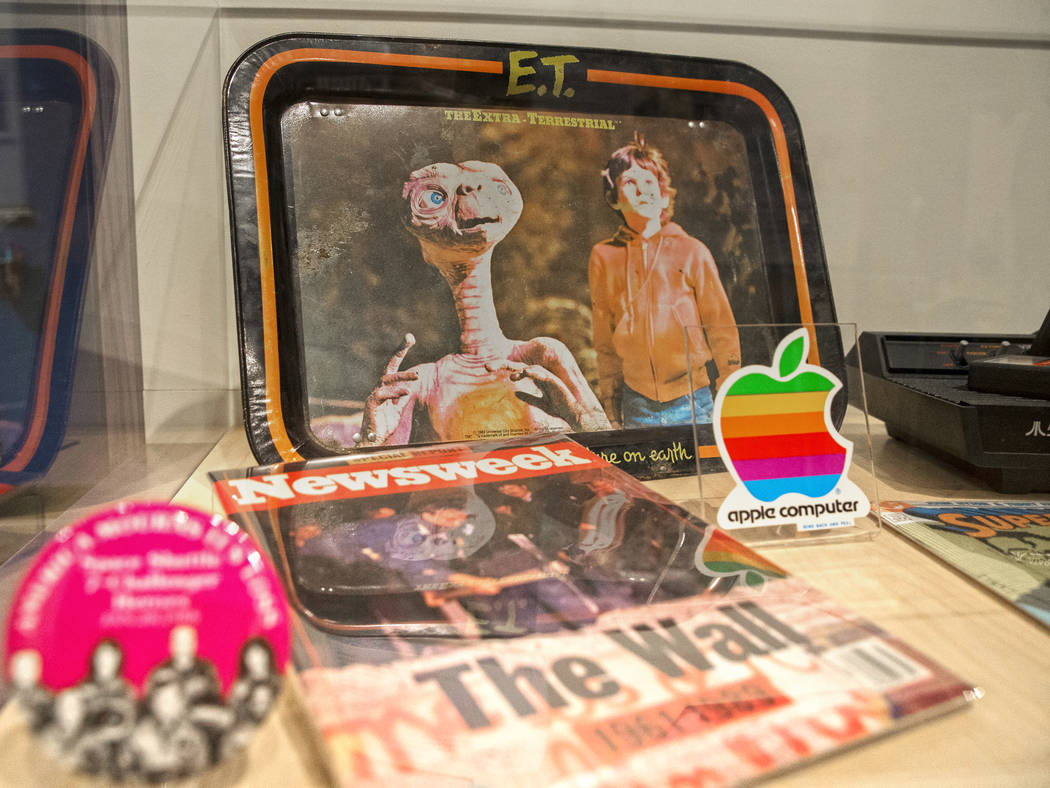 Memorabilia from the time period when the Ryan White story broke at the new Springs Preserve exhibit, &quot;The Power of Children&quot; on Wed., Dec. 13, 2017, in Las Vegas. White was an Indiana teenager who gained national attention after an HIV/AIDS diagnosis caused him to not be re-admitted to school. Benjamin Hager Review-Journal @benjaminhphoto 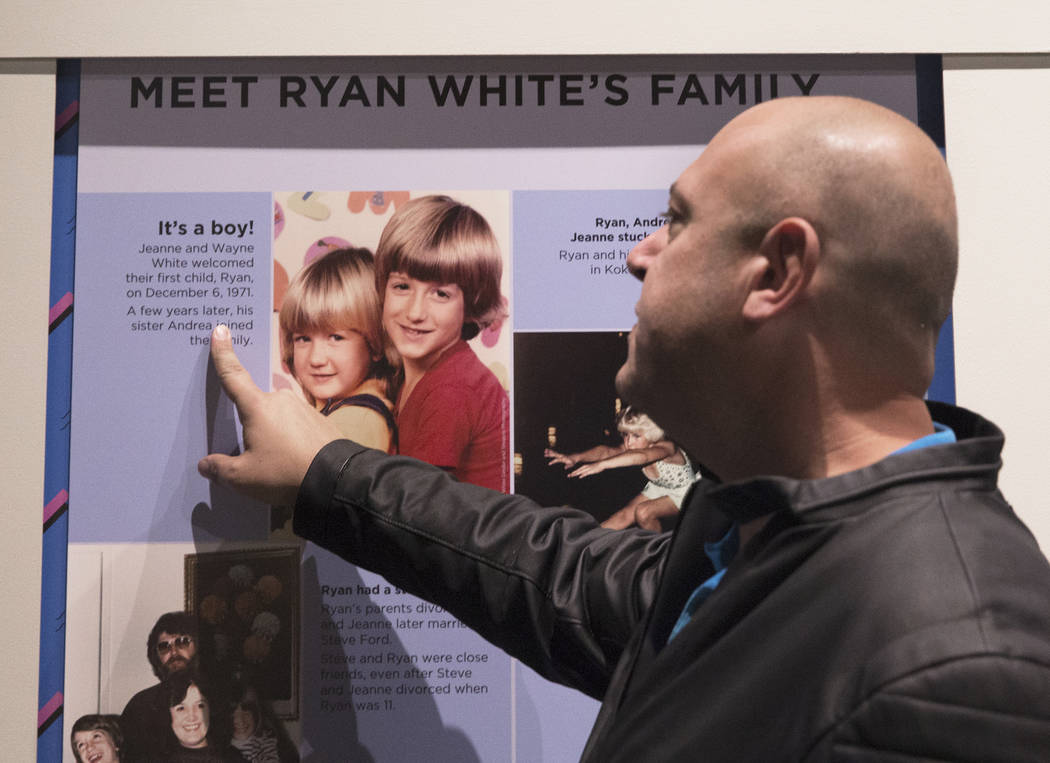 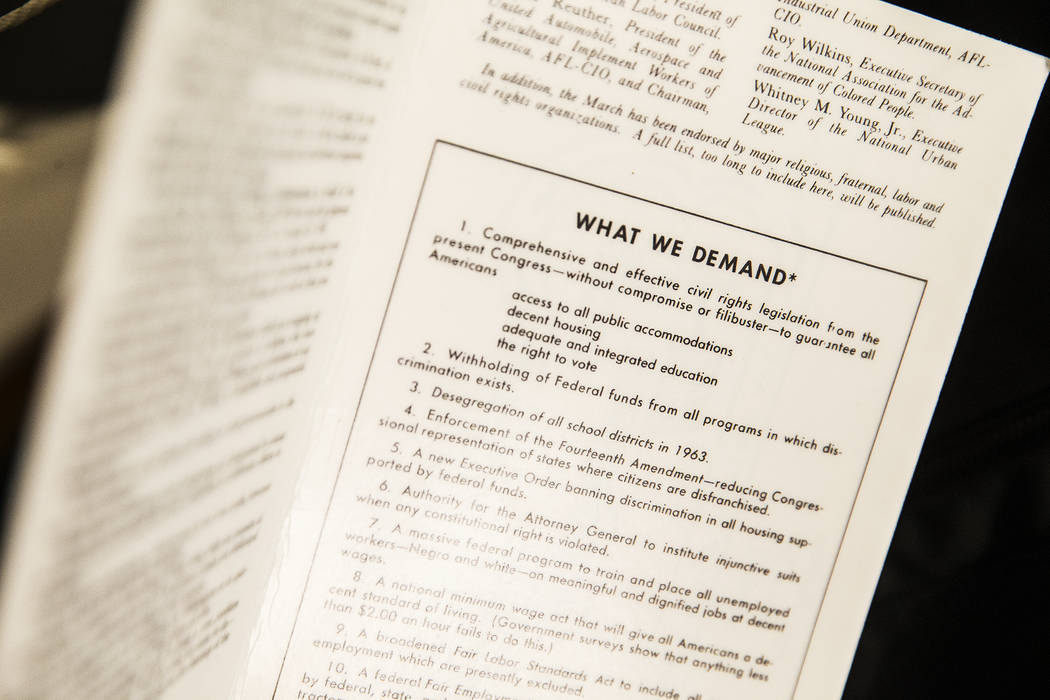 A leaflet detailing the demands of Dr. Martin Luther King and the protesters that marched on Washington in 1963 at the new Springs Preserve exhibit, &quot;The Power of Children&quot; on Wed., Dec. 13, 2017, in Las Vegas. Benjamin Hager Review-Journal @benjaminhphoto 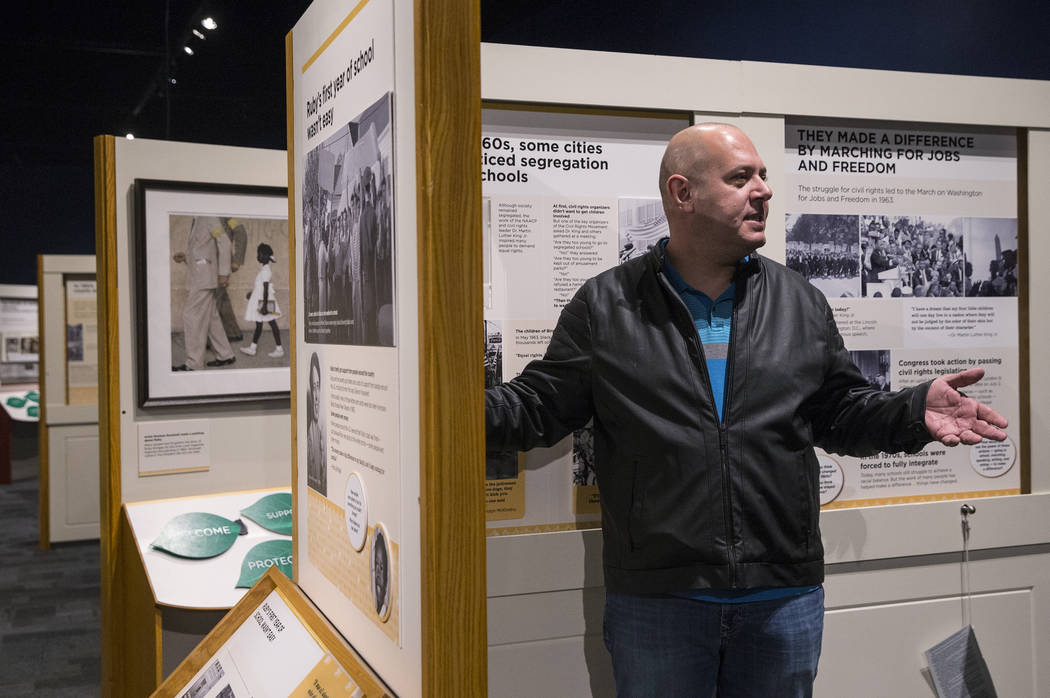 And a little child shall lead them.

The Old Testament prophet Isaiah wasn’t referring to Anne Frank, Ruby Bridges and Ryan White when he made that pronouncement, but it definitely applies to the trio at the heart of “The Power of Children.”

Subtitled “Making a Difference,” the touring exhibit (at the Springs Preserve through Jan. 7) focuses on the bigotry and hatred the three youngsters faced — and on their positive responses to literal life-or-death circumstances.

During World War II, Frank hid from the Nazis for two years with her family and others in an Amsterdam attic. Although she died at 15, in 1945, at the Bergen-Belsen concentration camp, her “Diary of a Young Girl” — published in 1947 and subsequently translated into more than 65 languages — keeps her words, and spirit, alive.

White, a hemophiliac who contracted AIDS through a contaminated blood transfusion, died at 18 in 1990 — but not before the Indiana native helped others understand a then-mysterious, often hysterically feared, disease.

Only Bridges, who integrated an all-white New Orleans elementary school in 1960 — and, for most of the year, was its sole student — survived. Now 63, she chairs the Ruby Bridges Foundation, which promotes “the values of tolerance, respect and appreciation of all differences.”

That seems as good a description as any for “The Power of Children.”

When Springs Preserve exhibits curator Aaron Micallef first experienced it a few years ago, he “was taken by the exhibit. It dealt with difficult subjects, but it didn’t sugarcoat them.”

Indeed, one of the first images in the exhibit is a red, white and black armband — emblazoned with a swastika, symbol of the then-new Nazi party, whose leader Adolf Hitler “promised to provide jobs and food for Germans (but not all Germans),” according to an exhibit text panel.

Introducing not only Anne Frank but her entire family, the display traces their lives in Germany — where they initially had friends of all faiths — through the Nazi persecution of Jews, which inspired the Franks (and many other Jewish families) to leave their homeland.

Anne’s father, Otto Frank — the only family member to survive World War II — recalled why. “I can remember groups of Nazis marching by, singing ‘When Jewish blood splatters from the knife,’ ” according to one of the exhibit’s text panels.

That’s an example of the exhibit’s straightforward approach to the ordeals experienced by its central trio, Micallef notes.

Too often, “I think people are too kid-gloves with kids,” he comments. By contrast, the “Power of Children” exhibit “treats them the same as adults.”

The curator first experienced “The Power of Children” at its permanent home, the Children’s Museum of Indianapolis — and sought to bring a traveling version to the Springs Preserve as part of a 50-state tour.

Choosing to be kind

In the area devoted to Ruby Bridges’ story, a wall-sized photograph depicts demonstrators who tried to stop her — and the coffin they brought, containing a black doll meant to scare Ruby and her family. Every morning, one of those protesters screamed at Ruby: “I’m going to poison you. I’ll find a way.”

Micallef wonders, “At what point does that seem an appropriate thing to yell at a little child?”

The exhibit also touches on other pivotal moments of the civil rights era, from Martin Luther King’s 1963 March on Washington to other school integration confrontations, as chants of “Two, four, six, eight, we don’t want to integrate” emerge from a nearby speaker.

Opening a school locker in the exhibit’s Ryan White section, meanwhile, unleashes a flood of fearful whispers from students afraid to attend school alongside an AIDS patient: “Don’t let him touch you!” “He’ll spit in your food!”

On the lighter side, the display captures Ryan’s just-a-kid side through such artifacts as his skateboard, his Atari 2000 video game console, his Sony Walkman and the guardian angel night light that went with him every time he had to go to the hospital.

Augmenting the “Power of Children” exhibit: contributions from visitors, ranging from written comments to ceramic discs made by local students and emblazoned with words and phrases inspired by the display.

Out of the mouths of babes

Even though Frank and White died young (Bridges, now 63, continues her activism), their wise-beyond-their-years words live on, as the “Power of Children” exhibit demonstrates. A sample of the exhibit’s quotations from Frank, Bridges and White — and Springs Preserve visitors reacting to their examples:

On the dwindling food supply while in hiding: “That’s all there is. We’re going to be hungry, but nothing’s worse than being caught.”

On the power of confiding in her diary: “I can shake off everything if I write: my sorrows disappear, my courage is reborn!”

On seeing a chestnut tree and an open sky from her hiding place: “As long as this exists, how can I be sad?”

On her hopes for the future: “I feel the suffering of millions and yet, I somehow feel that everything will change for the better, that this cruelty, too, will end.”

On understanding her ordeal: “I finally realized everything had happened because I was black.”

Ruby’s prayer for the white protesters trying to stop her from attending school: “Please, God, try to forgive those people. Because even if they say those bad things, they don’t know what they’re doing. So you could forgive them. Just like you did those folks a long time ago when they said terrible things about you.”

The grown-up Ruby Bridges Hall, reflecting on the power of forgiveness: “Forgiveness is not for the person that asked you to forgive them. It is for yourself … It allows you to free yourself of whatever’s hurting you, and to move on.”

On facing AIDS and prejudice: “My personal philosophy was no complaints, baby, no surrender.”

On being welcomed to his high school: “I’m just one of the kids. … Because the students at Hamilton Heights High School listened to the facts, educated their parents and themselves and believed in me.”

Comments from students visiting “The Power of Children” exhibit:

“I promise every kid in the world can make a change — from Vanessa to all kids.”

“My name is Tommy and I hope this can help people. I help kids who get picked on because they are different.”

“Waking up every day can be a challenge, but if you face it head on you are a thousand times bigger and stronger than any challenge you wake up to. Keep your head up and breathe.”

“Be your true self. Don’t let anyone let you think different.”

What: “The Power of Children: Making a Difference”