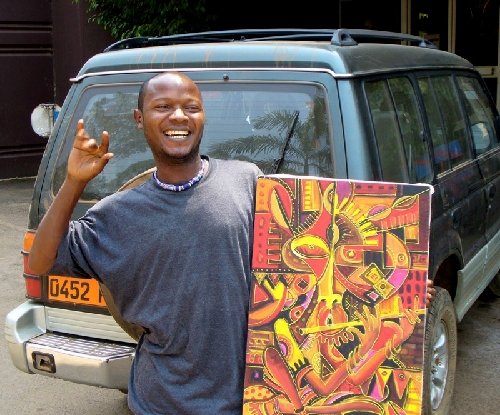 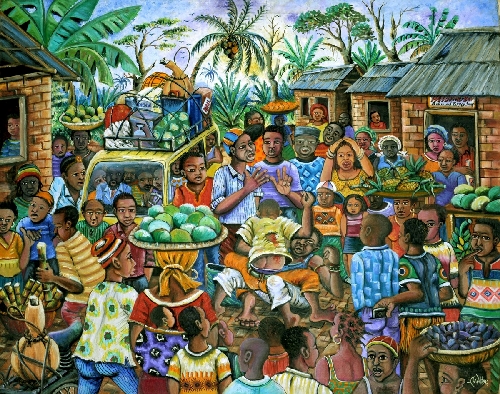 The West African country of Cameroon is a bit closer to North Las Vegas thanks to artist Angu Walters.

The 30-year-old painter is a splash of color in a din of poverty and political unrest, said Chuck Cavanaugh, the Southwest resident who helped put Walters’ name on the lips of Las Vegas artists.

Walters’ works are to be on display in the exhibit "Art Cameroon" today through Sept. 1 at Left of Center Gallery, 2207 W. Gowan Road.

"I feel extremely overwhelmed with joy because I know this is an opportunity of a lifetime for any artist especially from the Third World to share your talent with the rest of the world," Walters said in an email. "Left of Center Gallery is making that sharing possible through the exhibition of my works. I believe they have what it takes to expose my talent to the world."

Cavanaugh discovered Walters five years ago during a visit to his village in Cameroon. Walters’ abstract and surrealist paintings hung in the village hotel, and Cavanaugh decided to investigate their creator, he said.

Walters welcomed the travelers into his home. Cavanaugh likened the visit to entering Merlin’s cave, an "enormous treasure in a highly unlikely setting," he said.

"We found Angu Walters living in very humble circumstances, down an alley in a set of adjacent rooms which he shares with a sister and her family," Cavanaugh said. "Inside of his hovel were these treasures. The contrast was most striking. It was quite an experience."

"It was just a random chance (encounter), and he seemed like such a nice guy," Cavanaugh said. "You just like him immediately and want to help him."

Walters was born and raised in an English-speaking province of Cameroon. He developed twin interests in traditional African music and painting but explored the latter seriously. Music is a common theme of Walters’ art, Cavanaugh said.

His paintings focus mostly on the painful side of life, such as poverty and disease, according to his online biography. He also paints music – what he claims reflects the happy side of life, the biography reads. Walters is unmarried and has no children but lives near his extended family.

"My artistic inspiration is life; everyday life – life is the greatest gift to mankind and inspires all my works," Walters said in the email. "All my pieces are favorite and memorable. That is because each one of them is carefully crafted to communicate to someone out there, and since I value every single admirer of my works, that makes all my pieces favorites."

As a boy, Walters experimented with ink on cardboard, and his talents spurred his mother to ask recognized Cameroonian artist S. Nzante Spee to train her son. Thereafter, Spee trained Walters in his workshop, and the boy started to support himself as an artist.

His works are exhibited in galleries worldwide, including The Arts Factory, 107 E. Charleston Blvd., and the National Museum of Yaoundé, and Walters has mentored five artists. He aims to open an art center and school one day.

"I also would love an opportunity to mentor young talented kids and inspire them to become the best artists that they can be," he said.

Walters has yet to visit the United States.

"Traveling is a school and an addition to the experiences of life – life that inspires my works," Walters said in the email. "If I have an opportunity to come to the United States, I will like it, but if not, I am OK that my works do the traveling."

Barbara Walters, superstar and pioneer in TV news, dies at 93