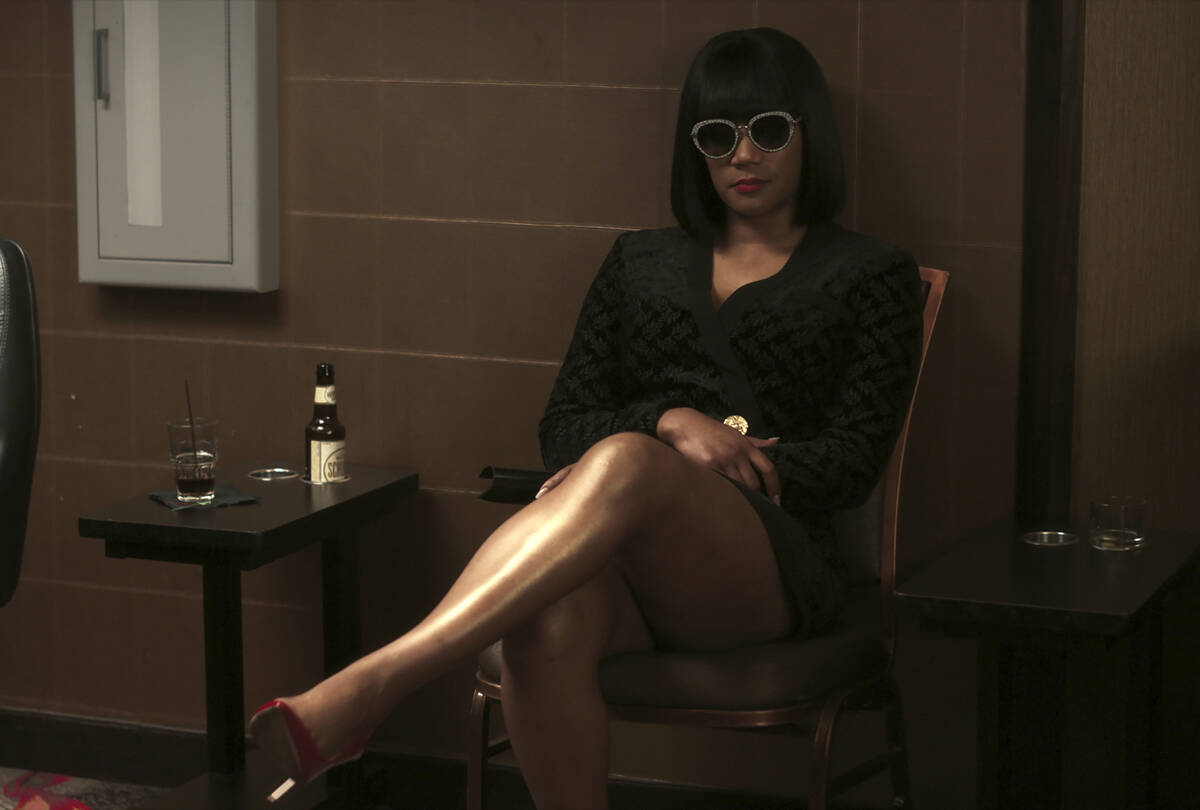 Tiffany Haddish has gone platinum. It’s 4 p.m. on a Sunday at her home near South Central Los Angeles and the comedian-actress-activist wears a swingy blond wig and a bright neon dress that hugs every curve.

“Honey, blondes do have more fun. I’m just gonna go with it,” she says with a loud laugh. As for the hair, she has one more thought on that matter: “Yeah, I’m just tryin’ to appropriate white culture!”

Haddish doesn’t have to appropriate anything since it’s good to be her these days. Not only is she generating Oscar buzz for her new film, “The Card Counter,” but she’s dating rapper Common and doing good work in her community. “I’m opening a grocery store in South Central L.A.,” she says. “They shut down three before the pandemic. It’s not a good situation. People are trying to starve us out.”

“I know you’re thinking, ‘Why does she still live in South Central?’ ” Haddish adds. “Why should I move away? Why not bring the value up in the community? Just because you become successful, you don’t run away. You invest your money and make it better.”

In director Paul Schrader’s “The Card Counter,” opening this weekend, William Tell (Oscar Isaac) is a gambler and former serviceman who must reform an angry young man. He also must deal with his gambling financier La Linda (Haddish), who helps him figure out the big win while also falling for him.

Next up for Haddish, 41, is Disney’s “Haunted Mansion.”

Before we get to the movie, why open a grocery store in the South Central area?

I’m very curious about things. The more I know, the more I gain and the more powerful I become as a person. So I did a lot of research about food and shopping and gardening and financial literacy and Black people. Those books got me fired up. I want to have classes at my store, like a cooking class and finance courses. Once you know how to feed yourself and know how money works, you’re a stronger human. And you make your community stronger and don’t need as much police. That’s my passion.

Tell us about “The Card Counter.” It’s one of your first serious, dramatic roles.

I’m just trying to entertain and bring joy, mystery and drama. That’s the greatness of a director like Paul Schrader. He gave me great direction in all of those areas to play La Linda. I wanted to show another side of me. I’m like an onion: I’ve got layers.

What is the core of La Linda, who finds poker players and finances them as part of her stable?

She’s like a good pimp. She’s also like a Hollywood agent. I’m looking for the person with the talent. She has her investors and wants to add Oscar’s character to her stable of really great poker players. She gets him and also has feelings for him because every woman loves a mysterious man.

And you have a hot love scene with Oscar Isaac?

Girl, that’s my first time ever doing a sex scene. I got to take my shirt off, and I show some skin! I was like, “Let’s do this!” It was actually a lot of technicalities and guidance from the director, but I still felt beautiful. We did three takes. I’ve watched them, and I think the same thing each time: I wish I look like that during sex!

Did anyone like a famous, handsome boyfriend get upset watching your sex scene?

(Laughing) You mean, my man? Common. We had a conversation before shooting the sex scene, and my man is the reason why I wasn’t so nervous and concerned on the set. He gave me a lot of tips because he has done sex scenes in movies.

You’ve gone through some really hard times, living in your car and also dealing with family problems as a kid. These are tough times for many people. Any advice?

If you’re going through a hard time, pay attention. Ask: Why am I going through this and what can I learn from it? Above all, I ask: What is funny about this situation even if it initially seems like nothing is funny?

So, you must find the humor — even in the times of COVID and so much unrest.

Laughter is so important. I asked Norman Lear his secret, and he’s 100. He said, “I laugh hard every single day.” When you laugh, you create serotonin that helps you heal. I laugh so hard I cry. Sometimes, I cry so hard I laugh. Sometimes, I cry and there’s nothing funny. So, I look in the mirror and I start to laugh because I make the ugliest cry face. And that makes me laugh.

What is your idea of a perfect Sunday?

OK, I like to get up and pray a little bit. Then I go to the beach and surf. That’s one version of a perfect Sunday because both prayer and water mean getting close to God. Then I come back home, wash up, have a sandwich and check out the newspaper. Then I’ll take a nap or watch some cartoons. If I’m with my man, I take a nap next to him, or we’ll say, “Come on, let’s play.” We end the day by watching cartoons, or I’ll say, “Let me listen to that song.” I’m just a little annoying that way. I want to hear the songs before we watch more cartoons because …

Girl, that’s what I was saying.