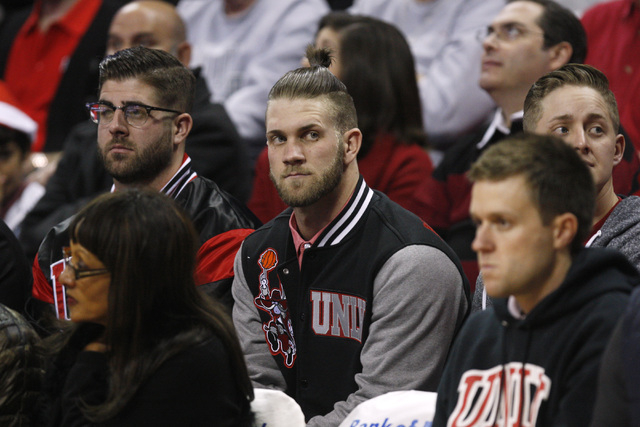 The Washington Nationals slugger and his soccer star fiancée, both 22, have deleted any recent references to each other. Even their biographies were scrubbed, according to the Washington Post.

They had planned a Jan. 2 wedding in the San Diego temple of the Church of Jesus Christ of Latter-day Saints and a second wedding the next day.

“I testify that bad days come to an end, that faith always triumphs, and that heavenly promises are always kept.” — Jeffery R Holland.

Her Instagram bio was changed to “the best is yet to come” and added a reference to the Book of Mormon. Harper deleted all descriptions.

They were engaged last year after dating for several years.

It was reported here in October that they planned to marry in January.

Harper grew up in Henderson and was the No. 1 overall pick in the 2010 Major League Baseball draft.

Andre Agassi and his wife, Steffi Graf, have made a $1.5 million donation to the Lou Ruvo Center for Brain Heath.

Larry Ruvo, who founded the center, confirmed the gift, saying Agassi and Graf “have been there for us since the inception of Keep Memory Alive.”

Agassi responded with the following quote:

“It’s no secret I have a great deal of respect and admiration for Larry Ruvo and all he has done for our community. That being said, all my personal giving is just that, personal.”

Ruvo, who founded the center of research and treatment for diseases like Alzheimer’s and Parkinson’s, also confirmed that Keep Memory Alive’s Power of Love gala June 13 will honor Andrea Bocelli as well as his wife, Veronica. She agreed Saturday, Ruvo said.

She addressed the reports on Facebook late last week: “My longtime friendships with my co-workers Matt Lauer and Bobby Flay are exactly that – longtime relationships and nothing more. There has never been any romantic relationship.”

The same goes for the John Mayer rumor, she told Gossip.com.

She recently announced on Facebook that she had separated from her husband of 11 years, Todd Thompson, in July.

Renaud, 86, was in Las Vegas on Thursday when the Eiffel Tower and the replica at Paris Las Vegas went dark to honor the 12 victims of the terrorist attack on satirical newspaper Charlie Hebdo.

She was on hand for the grand opening celebration of Paris Las Vegas on May 1, 1999, when the replica was illuminated as the Eiffel Tower in Paris went dark.

The legendary singer and actress watched the TV coverage in horror Thursday at the home of longtime friend Annee Nouna.

“She was aghast, shocked,” said friend Jerry Engel, who had breakfast with Renaud and Nouna. Engle was hired as Renaud’s accountant when she arrived in Las Vegas in 1963 as the singing star of the French revue Casino de Paris, a Dunes sensation.

Renaud was reunited Sunday with a number of longtime Las Vegas friends at a party hosted by Nouna.

While addressing the group, Renaud recalled a conversation with Teamsters boss Jimmy Hoffa at the opening of Caesars Palace in August 1966.

When she predicted it would be a big success, Hoffa, not one to mince words, replied, “Better be.” The Teamsters had a ton of money invested.

Hoffa had a prediction of his own, said Renaud. She said he envisioned a Strip with the pedestrian bridges that now, a half-century later, link nearly every intersection

“Sons of Anarchy” star Mark Boone Junior, celebrating the series finale of FX’s hit television show Friday at Chateau Nightclub &Rooftop. He was accompanied by the reality show’s bike band, The Forest Rangers. He hopped on the microphone and surprised the crowd by singing Elvis Presley’s “Can’t Help Falling in Love.”