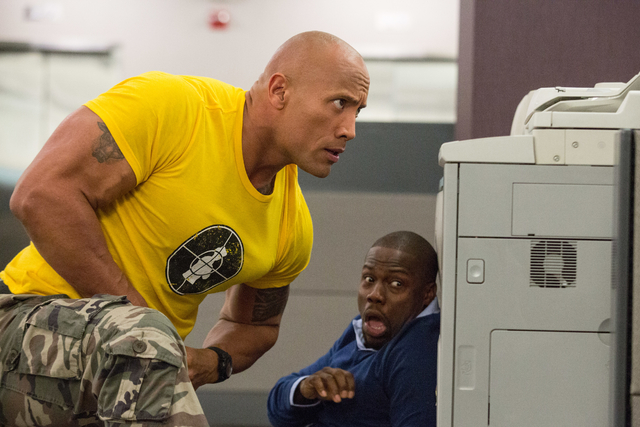 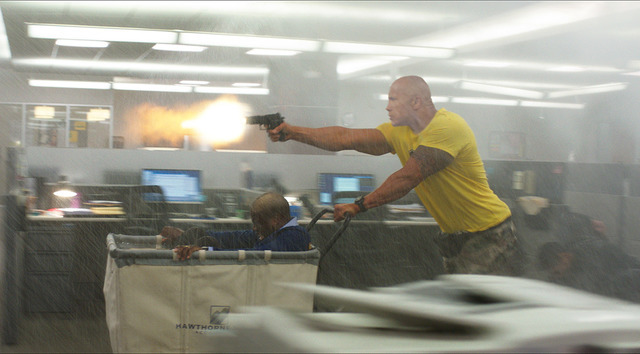 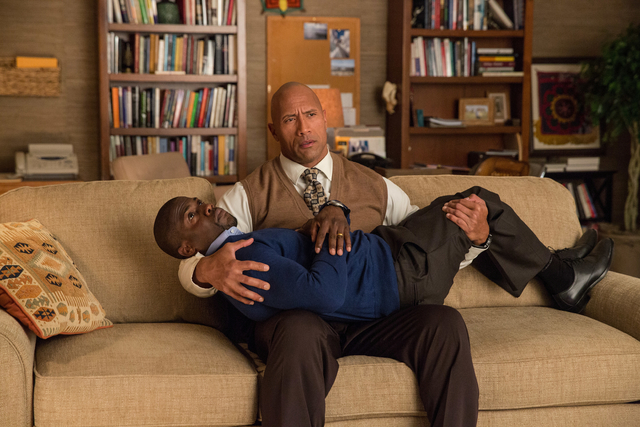 Ever since he first hit theaters with 2001’s “The Mummy Returns,” Dwayne Johnson has been waiting for a movie that would allow him to showcase the full breadth of his talents.

“Central Intelligence” is not that movie.

But it’s a step in the right direction.

Twenty years ago, a group of bullies threw “Fat Robbie” Weirdicht, naked and jiggling, into an assembly honoring the high school’s all-everything, Calvin “The Golden Jet” Joyner (Kevin Hart). While everyone else laughed, Calvin took pity on Robbie and handed him his letterman’s jacket so Robbie could (partially) cover up. It was an act of kindness Robbie never forgot.

Fast-forward to the present, the eve of their high school reunion, and Calvin is a miserable accountant who’s just been passed over for a promotion. Despite still being married to his gorgeous high-school sweetheart (Danielle Nicolet), Calvin fears he peaked as a teenager.

Then a Facebook friend request from a “Bob Stone” leads to a few drinks and Calvin’s realization that a new name is the least of “Fat Robbie’s” transformation. He’s now a muscular side of beef, portrayed by Johnson.

The most interesting choice made by the “Central Intelligence” writers — director Rawson Marshall Thurber (“We’re the Millers”), actor Ike Barinholtz and his “The Mindy Project” writing partner, David Stassen — is Bob’s innocence. Since his high school humiliation, Bob has been stuck in a state of suspended adolescence. A very odd adolescence.

Bob sports a skintight T-shirt emblazoned with a unicorn, which he deems “the most lethal animal on the planet.” Bob loves the “Twilight” books and just wanted his high school experience to be like Molly Ringwald’s in “Sixteen Candles.” He’s like a big, strange, overcaffeinated puppy — albeit a ridiculously lethal one.

Before long, Bob, who’s really a clandestine-ish CIA agent, tricks Calvin into using his accounting skills to help locate the source of some stolen satellite encryption codes. Then Bob’s co-workers, led by his former boss (Amy Ryan), turn up to tell Calvin that his new buddy is a traitor. Bob isn’t looking to retrieve those stolen satellite codes, they say, he’s trying to sell them to the highest bidder. Who’s a guy supposed to trust, a bunch of CIA agents in dark suits or some muscle-bound goofball with a fanny pack?

“Central Intelligence” is the best installment yet in Hart’s burgeoning “mismatched, non-buddy buddy movie” genre that includes “Get Hard” and the “Ride Along” movies. But this is Johnson’s movie from the start — when his face is morphed onto young dancer Sione Kelepi’s body — straight through to the final blooper reel. If it isn’t his most satisfying big-screen performance, it’s a close second to 2013’s otherwise-forgettable “Pain &Gain.”

The movie boasts some first-rate mayhem, including the scene in which Bob disarms a man with a banana. I mean, he uses a banana to disarm a man who’s wielding a knife. What would be special about overpowering a man armed with a banana? That would just be weird. And a little sad.

There’s more intelligence than you’d expect in a movie like “Central Intelligence,” as the writers and Johnson create some doubt as to whether Bob is really as naive as he seems.

But the longer “Central Intelligence” goes, the more convoluted the plot gets as the filmmakers try to milk the “which side is Bob on” teat long after it’s gone dry. They aren’t helped by the fact that a particular bit of casting all but ruins what’s supposed to be a major surprise. (You’ll know it when you see it.)

Still, it’s tough to knock a movie for trying too hard. Especially in a summer when most of the competition seems to just be going through the motions.