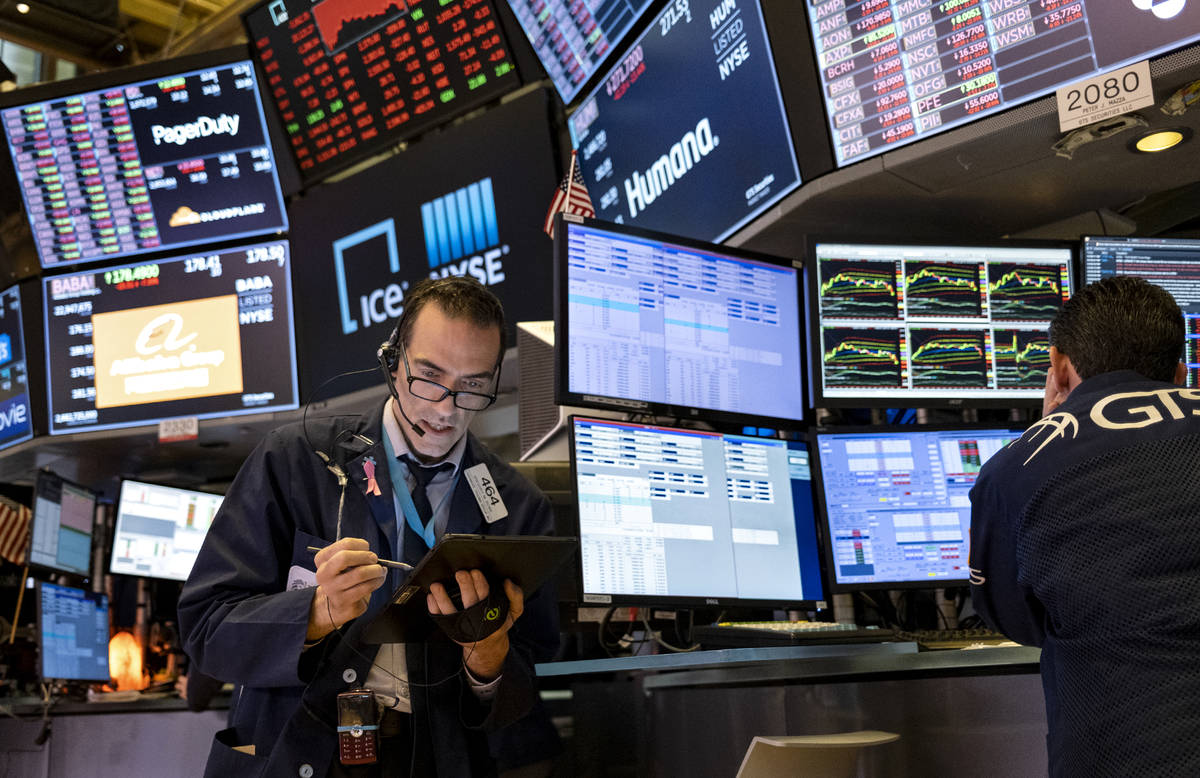 In this March 16, 2020, file photo, trader Gregory Rowe works on the floor of the New York Stock Exchange at the end of the trading day. Stocks are drifting between small gains and losses in early trading on Wall Street, Tuesday, Oct. 6, 2020, a day after a broad rally. (AP Photo/Craig Ruttle, File)

NEW YORK — Stocks dropped suddenly on Wall Street Tuesday afternoon after President Donald Trump ordered a stop to negotiations with Democrats over another round of stimulus for the economy, which has been punched into a recession by shutdowns related to the coronavirus pandemic. The Dow Jones Industrial Average swung instantly from a gain of about 200 points to a loss of about 300 points. The series of tweets from the president came just hours after Federal Reserve Chair Jerome Powell urged Congress to come through with more aid, saying that too little support “would lead to a weak recovery, creating unnecessary hardship for households and businesses.”

Nancy Pelosi is asking for $2.4 Trillion Dollars to bailout poorly run, high crime, Democrat States, money that is in no way related to COVID-19. We made a very generous offer of $1.6 Trillion Dollars and, as usual, she is not negotiating in good faith. I am rejecting their…

Stocks were drifting in afternoon trading on Wall Street Tuesday, as the market’s momentum slows following the S&P 500’s best day in more than three weeks and another rocky stretch of trading.

The benchmark index was 0.1% higher after flipping between very small gains and losses throughout the day. Other stock markets around the world made mostly modest gains, while longer-term Treasury yields were hanging close to their highest levels in months.

Most stocks across the market were rising, and roughly two in three within the S&P 500 were higher. Companies that would benefit most from a strengthening economy gained ground, including banks, airlines and industrial companies like Caterpillar. Utilities rose 1.4% for the biggest gain among its 11 broad sectors, while energy stocks gained 1.1%.

Smaller stocks were strengthening more than the rest of the market in another sign of improved optimism. The Russell 2000 index of small-cap stocks was up 1.5%.

But many of the big stocks that carried Wall Street back to record heights during the summer were wavering. Apple was down 1%, Microsoft slipped 1.1% and Amazon dipped 1.4%. Movements for these behemoths have an outsized effect on the S&P 500 and other indexes that give bigger weights to companies based on their market value.

Trading on Wall Street has gotten even shakier recently as investors contend with a long list of uncertainties, from President Donald Trump’s COVID-19 diagnosis to waxing and waning expectations about Congress’ ability to deliver another round of stimulus for the economy.

The S&P 500 jumped 1.8% on Monday after Trump said he’s returning to the White House to complete his recovery from the coronavirus, though his medical team said he’s not yet fully “out of the woods.”

Some investors are also getting more hopeful that another big rescue package may be on the way, even though bitter partisanship on Capitol Hill has been preventing a compromise. Reports on the economy have been mixed recently, as some areas show a slowdown after extra unemployment benefits and other stimulus earlier approved by Congress expired.

“We continue to fail to understand how it is that any incumbent dare face his or her voters on November 3 without having passed the (new) stimulus package,” said Julian Emanuel, BTIG chief equity and derivatives strategist. “Which is why we continue to think there’s a reasonable chance something will get done.”

A report on Tuesday showed that U.S. employers advertised slightly fewer job openings in August than the prior month. But the number was nevertheless better than economists expected.

In the short term, Democrats and Republicans are continuing their talks on a stimulus deal as Election Day draws near. In the longer term, investors are seeing a higher probability for a big stimulus package if Democrats sweep the elections, which Wall Street sees as a likelier possibility than before.

The Federal Reserve’s chair, Jerome Powell, has repeatedly urged Congress to provide additional aid, saying the Fed can’t prop up the economy by itself, even with interest rates at record lows.

“The expansion is still far from complete,” Powell said in a speech to the National Association for Business Economics, group of corporate and academic economists. “Too little support would lead to a weak recovery, creating unnecessary hardship for households and businesses. Over time, household insolvencies and business bankruptcies would rise, harming the productive capacity of the economy, and holding back wage growth.”

Still, several big challenges lie ahead of markets. Chief among them is the still-raging pandemic, as so clearly illustrated by Trump’s stay in the hospital. The worry is that a ramp-up in infections could cause governments to bring back some of the restrictions they put on businesses early this year, which sent the economy hurtling into a recession.

“We’re on the eve of earnings season and people are reasonably undecided as to whether the correction that started in September has further to run,” BTIG’s Emanuel said.

The upcoming election also still means a host of uncertainty about tax rates and regulations on businesses, while tensions between the United States and China continue to simmer.

The yield on the 10-year Treasury note fell to 0.77% from 0.78% late Monday. While that’s still incredibly low, the yield has been generally climbing since dropping close to 0.50% in early August.