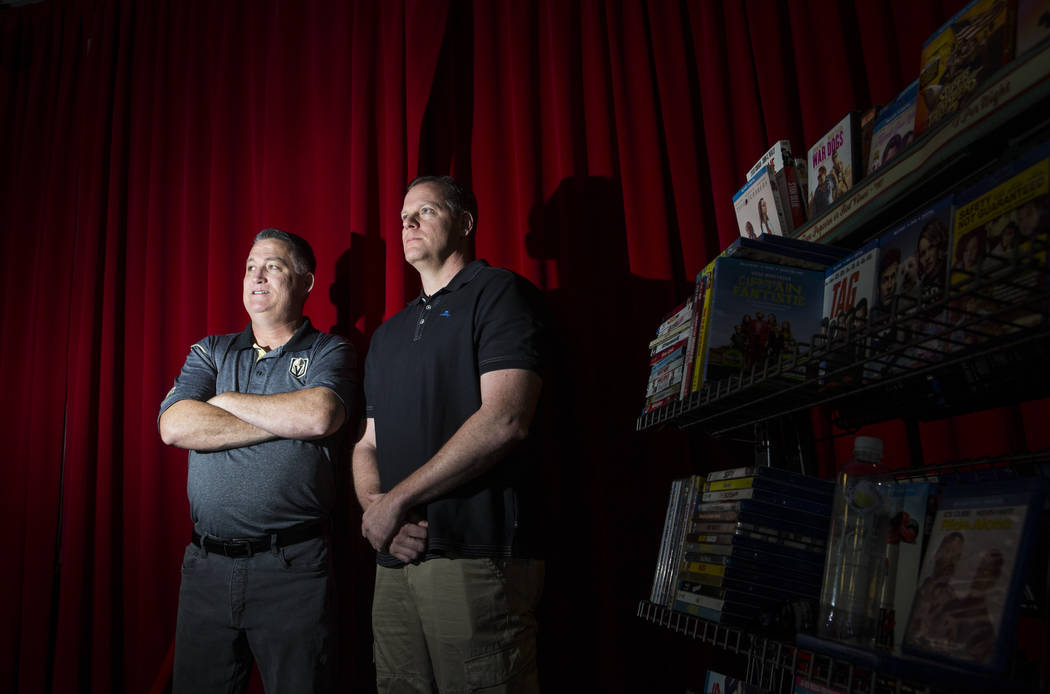 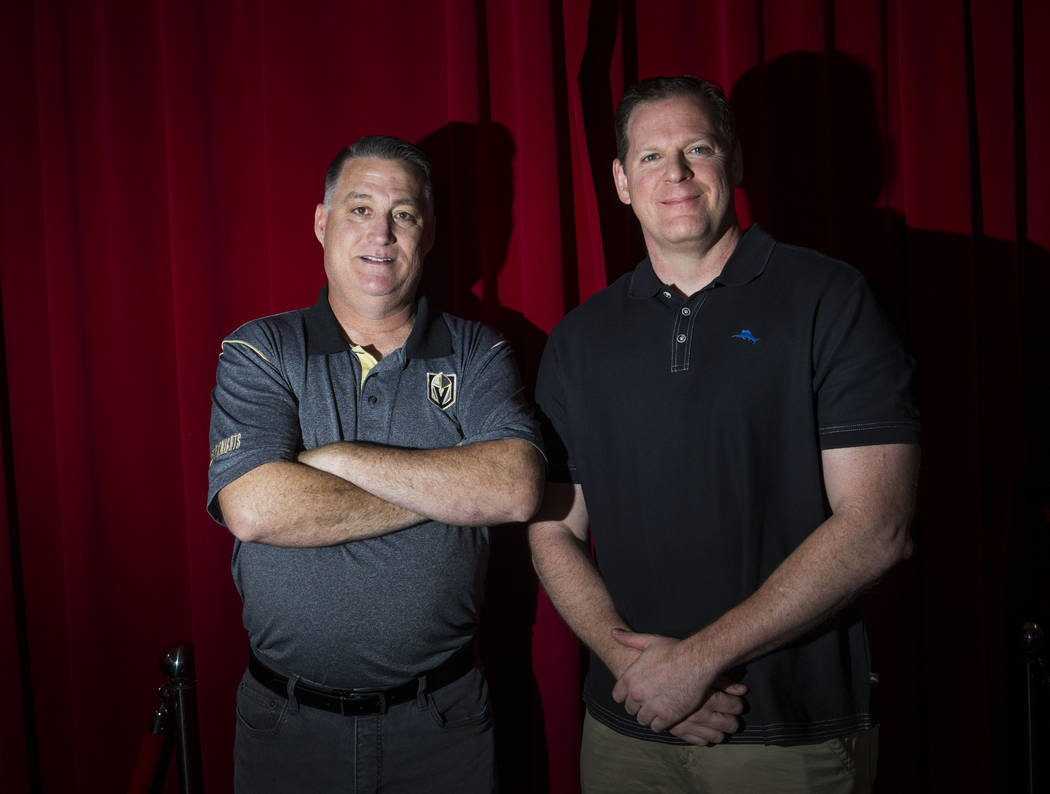 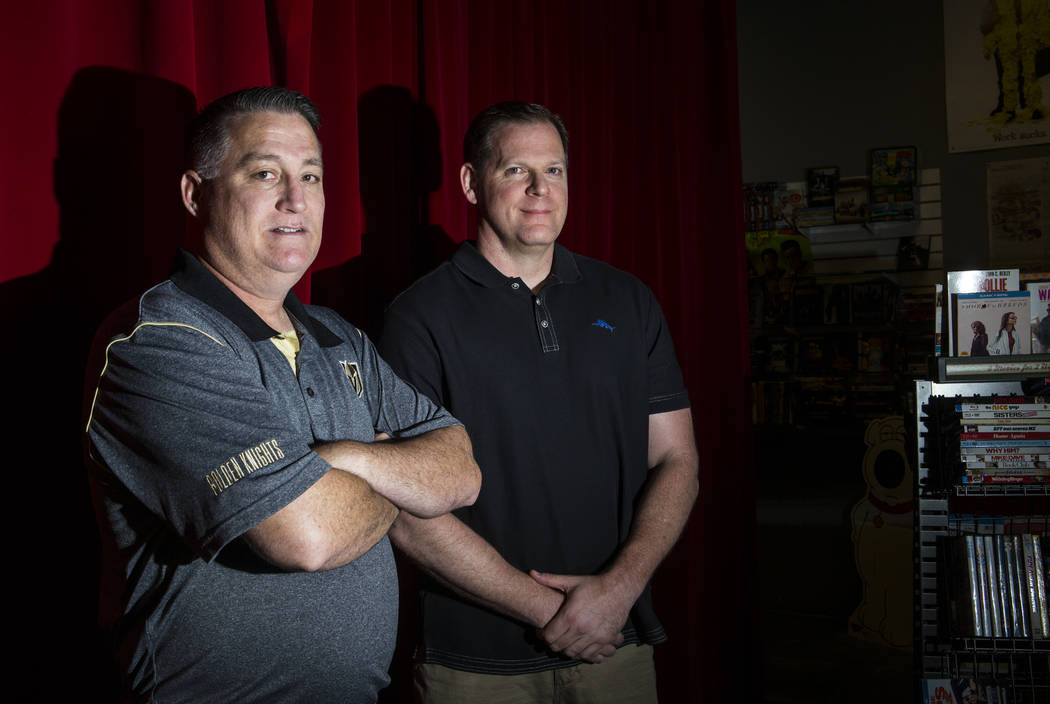 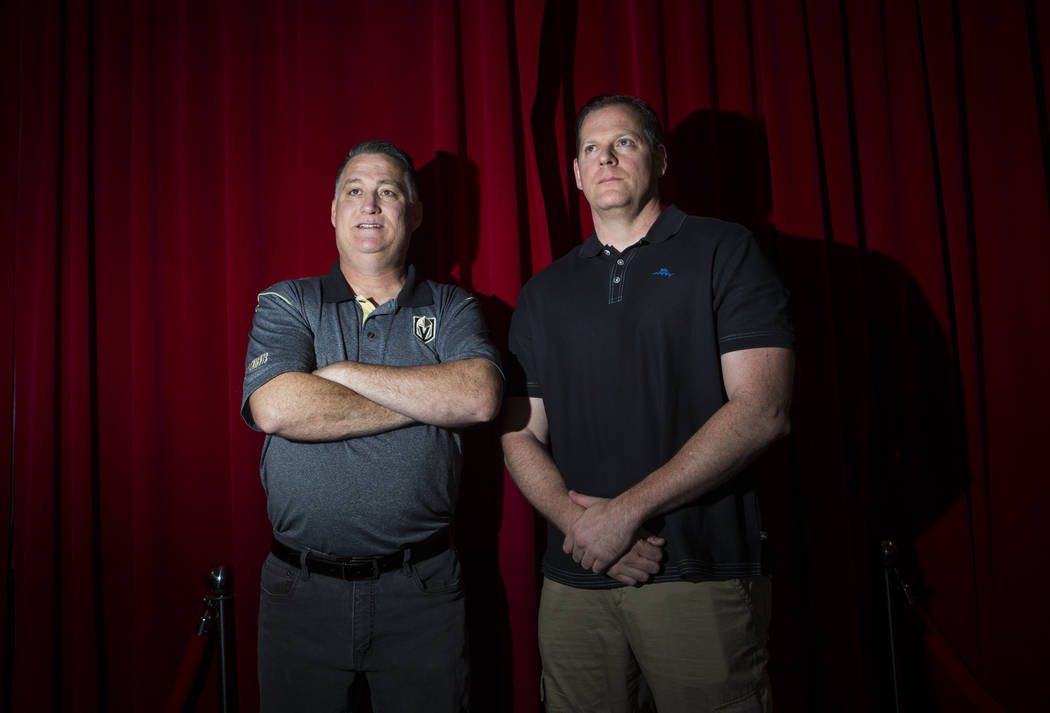 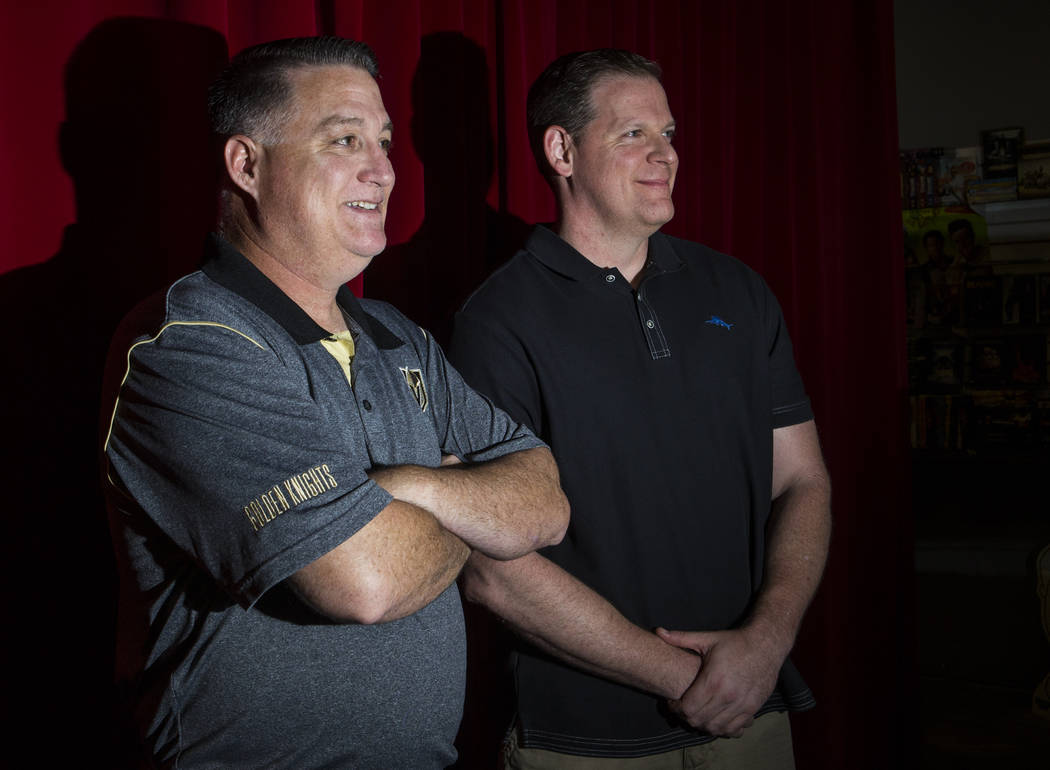 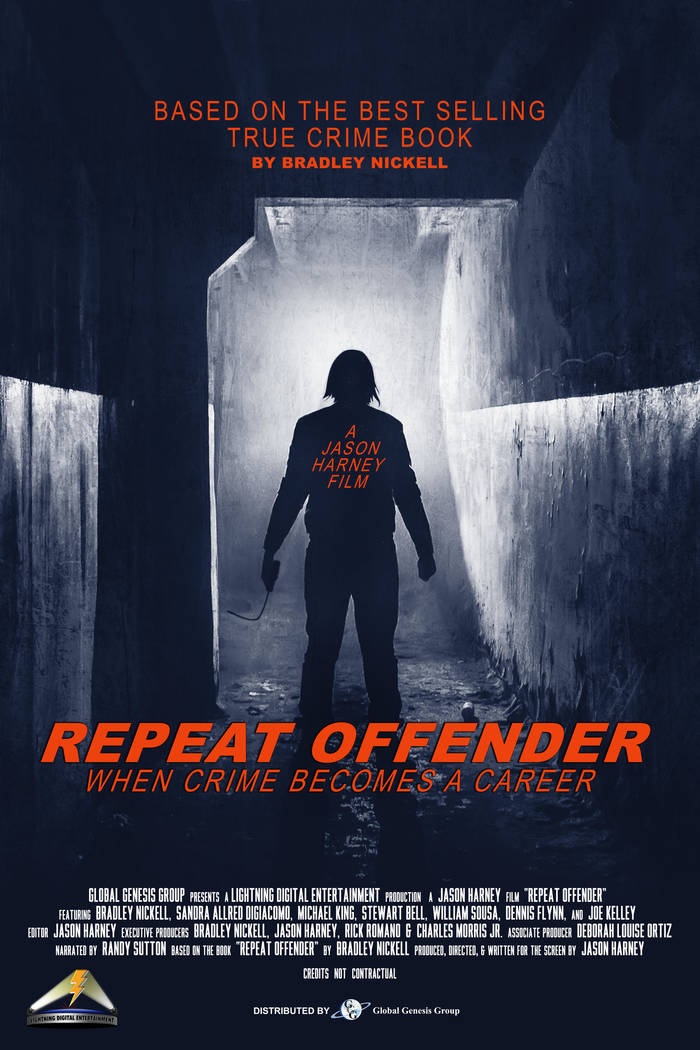 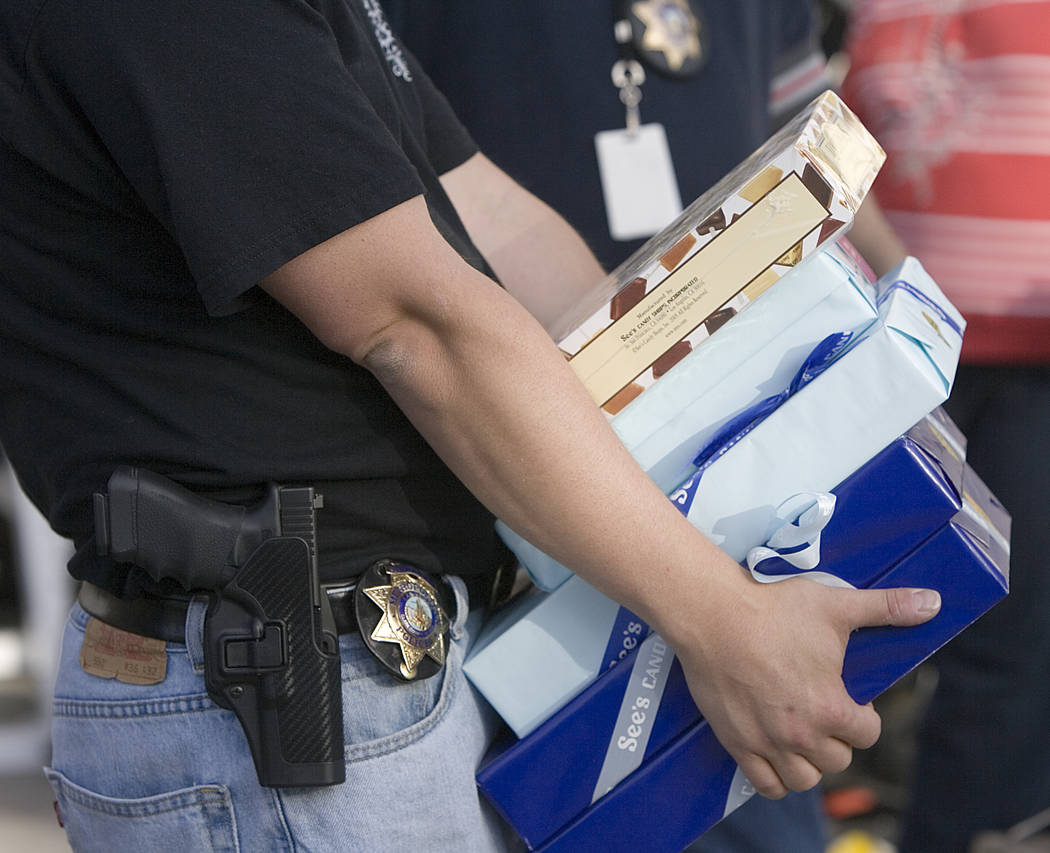 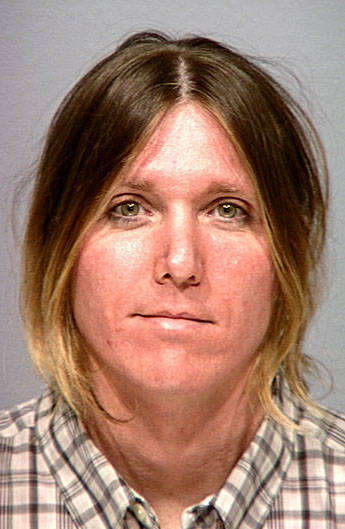 Daimon Hoyt, 42, an inmate at the Clark County Detention Center, is facing additional charges after her was recorded on tape on Sept. 18, 2007, attempting to put a hit out on a judge, a prosecutor and a police officer in a murder-for-hire plot. Hoyt, who was originally being held in connection with dozens of counts of burglary, possession of stolen property and lewdness with a minor under age 14, allegedly offered $30,000 to a cellmate to kill Clark County District Judge Michelle Leavitt, Deputy District Attorney Sandra DiGiacomo and Las Vegas police detective Bradley Nickell. (Clark County Detention Center) 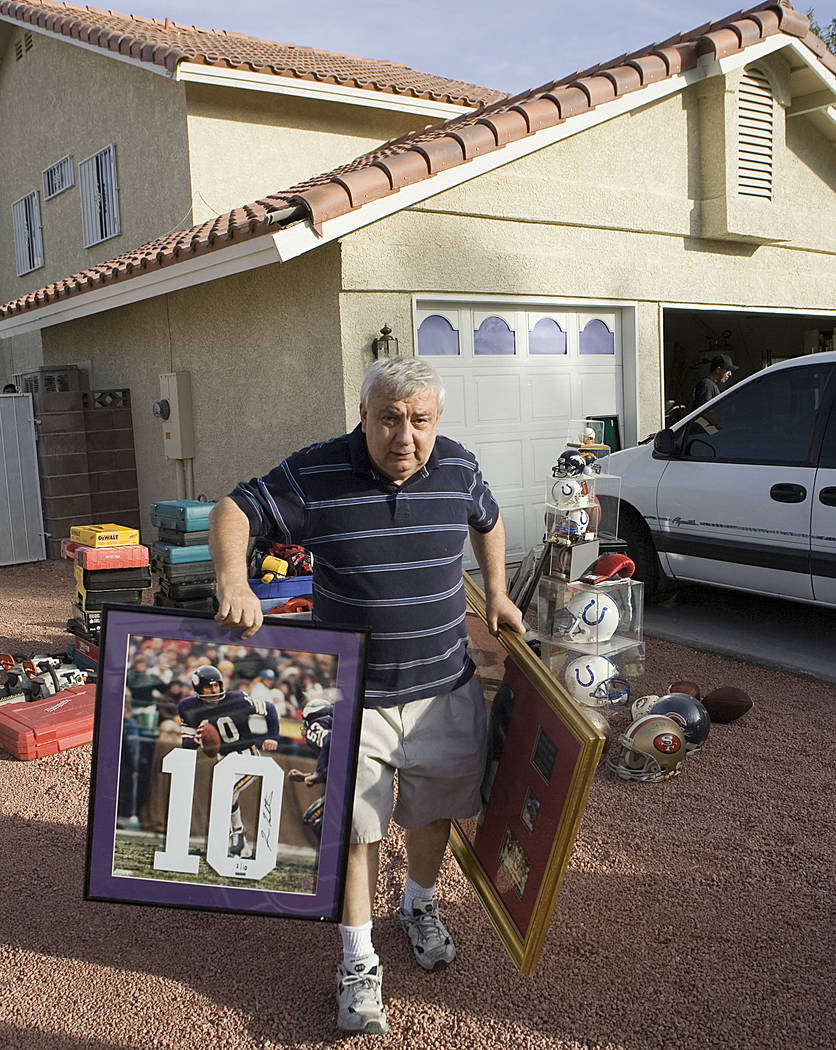 Rick Nara, owner of Play Ball, a sports card and sports memorabilia shop on Spring Mountain Road, carries some of his property that was recovered at a residence at 1504 Cutler Drive, near Charleston Boulevard and Buffalo Drive Monday, Nov. 6, 2006. Nara claims the merchandise was stolen from his store nearly 2 years ago. The Las Vegas police served a search warrant at the home of 31-year-old Bryan Michael Fergason and 40-year-old Daimon Devi Hoyt, recovering approximately $2 million in stolen merchandise. (Clint Karlsen/Las Vegas Review-Journal) 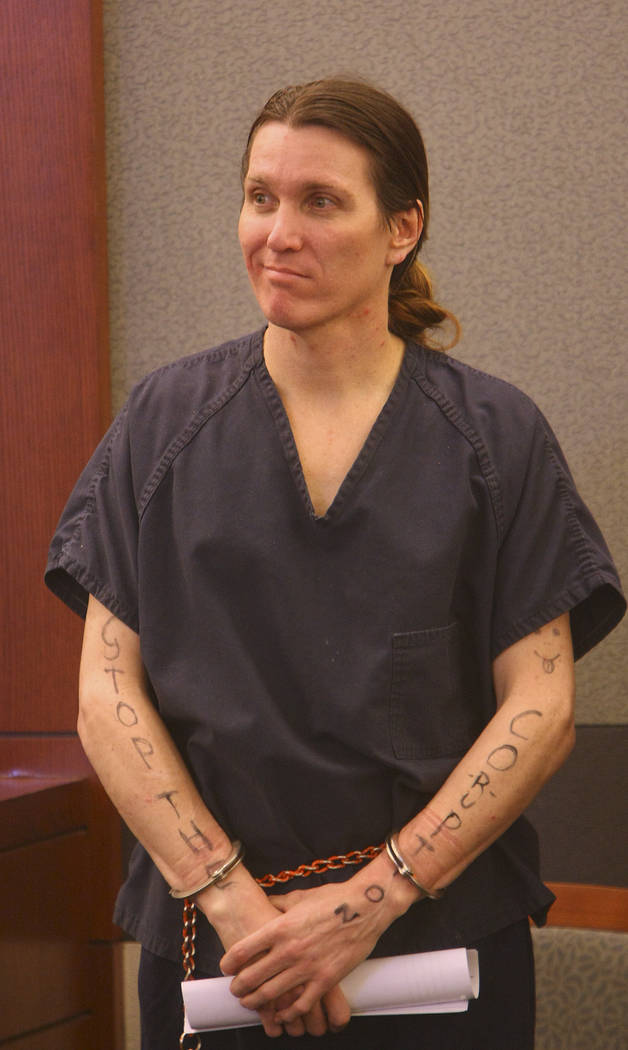 Daimon Hoyt, 42, appears in Las Vegas Justice Court on Thursday, Jan. 24, 2008, for his hearing in connection with attempting to put a hit out on a judge, a prosecutor and a police officer in a murder-for-hire plot. Hoyt, who was originally being held at the Clark County Detention Center in connection with dozens of counts of burglary, possession of stolen property and lewdness with a minor under age 14, allegedly offered $30,000 to a cellmate to kill Clark County District Judge Michelle Leavitt, Deputy District Attorney Sandra DiGiacomo and Las Vegas police detective Bradley Nickell. (Gary Thompson/Las Vegas Review-Journal)

Even in a city known for its flashy criminals, he remains one of the more notably over-the-top felons Las Vegas has ever seen.

Prominently displayed in his living room and garage, they made the house look like one of those memorabilia shops on the Strip that you walk past and think, “Well, that’s kinda neat, but who would buy that?”

In 2015, Monroe’s story was told in the true-crime book “Repeat Offender” by the man who brought him to justice, Detective Bradley Nickell.

Now, it’s being revisited in the documentary of the same name — available this week on iTunes, Amazon, Google Play and the Microsoft Store — that’s written and directed by retired Metro Sgt. Jason Harney.

“This was the case of a lifetime. Some detectives may never see a case like this,” Nickell says in the film. “It was the most incredible thing I’ve ever experienced.”

A 2006 arrest for breaking into the Anku Crystal Shop put Monroe on the radar of Metro’s Repeat Offender Program, where Nickell served as a detective from 1999 to 2015. (Citing frustration with the department’s bureaucracy, he’s spent the past four years back in uniform.)

Nickell, 49, picked up Monroe’s case in September 2006, after he’d already been convicted of at least 19 felonies dating to 1991. Many more would be added before the final case against him was adjudicated last year.

According to “Repeat Offender,” there wasn’t much Monroe wouldn’t steal.

One search revealed “probably 30 or 40” bottles of purloined Paul Mitchell hair-care products under his sink.

He’d swipe commercial-grade Viking freezers, then fill them with stolen food. “They were packed full of lobster tails and these huge cuts of beef from Arby’s,” Nickell says in an interview. In addition to their roast beef, he’d also take the restaurants’ meat slicers.

The man even burgled a framed poster of the 2005 Matt Damon-Heath Ledger movie “The Brothers Grimm,” for crying out loud. It’s hard to imagine a scenario in which either actor ever had one of those, let alone coveted one.

“The Metro evidence vault had to rent a new building just for this case. … I think, just from the house alone, it was over 1,700 items that were impounded,” Nickell says.

The value of the stolen goods was never appraised, because the dollar amount wouldn’t affect the case. But he puts the estimate at $2 million to $6 million.

Harney, 46, always was interested in making movies. In 1990, he joined the Army National Guard with plans to attend UNLV.

“But then Desert Storm happened,” he says, “and I got sent over there.”

The next thing Harney knew, he was a police cadet. “You just kind of end up on a path. You’re young, and you end up having a really, really good job, and so other things kind of go by the wayside. But (filmmaking) was obviously something that was always on my mind.”

By the late ’90s, Harney was spending most of his free time with Metro’s video production unit, learning editing and how to operate the cameras. Within a few years, he was making his own videos, and in 2003, he founded Lightning Digital Entertainment. It became a full-time career when he retired in 2015.

“I’m sure it’s not the normal path one takes to doing this kind of work,” Harney admits, “but it worked for me.”

‘I don’t even read books’

Nickell hadn’t thought of writing about his experiences in a book until his father-in-law brought it up.

But once he finished “Repeat Offender” and its 21 rewrites, he was fiercely protective of it. So much so that when Harney, whom he’d known for more than 20 years, approached him about turning it into a documentary, Nickell blew him off. He was already working on adapting it into a feature film.

No shortage of subjects

Nickell narrated “The Wounded Blue,” and the two are planning future projects, including a possible sequel to “Repeat Offender” that would focus on other career criminals.

“We’re looking at doing documentaries on a lot of different things,” Harney says. “I’ll probably tackle police use of force at some point, mass shootings at some point. There’s a lot of hot-button issues. When you spend a whole career in law enforcement, you certainly have no shortage of things that you probably want to say.”