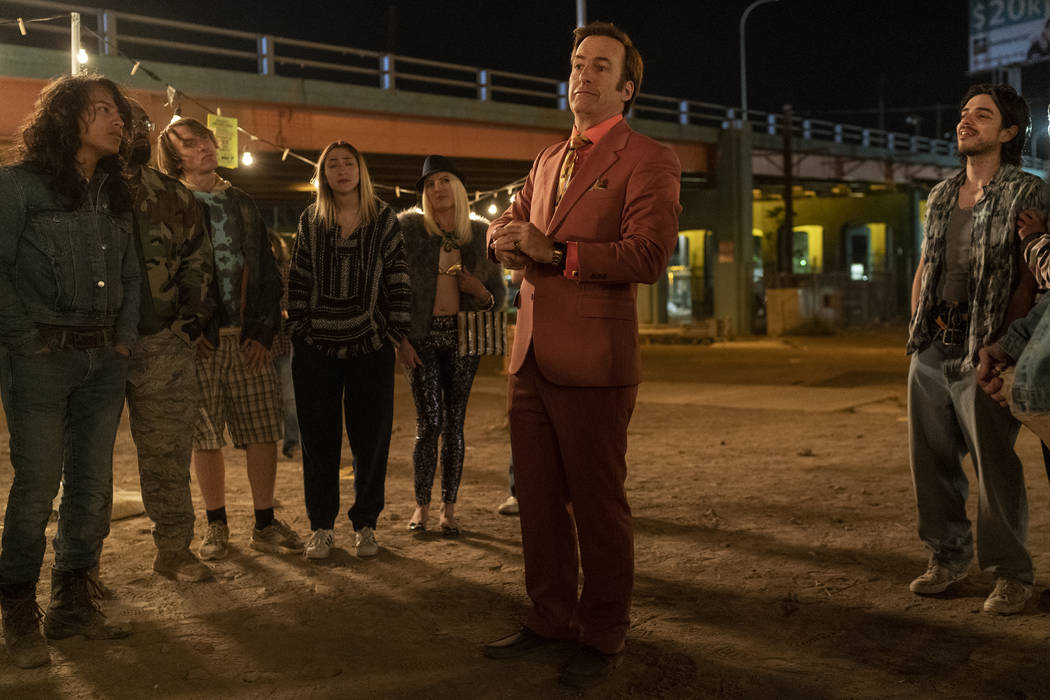 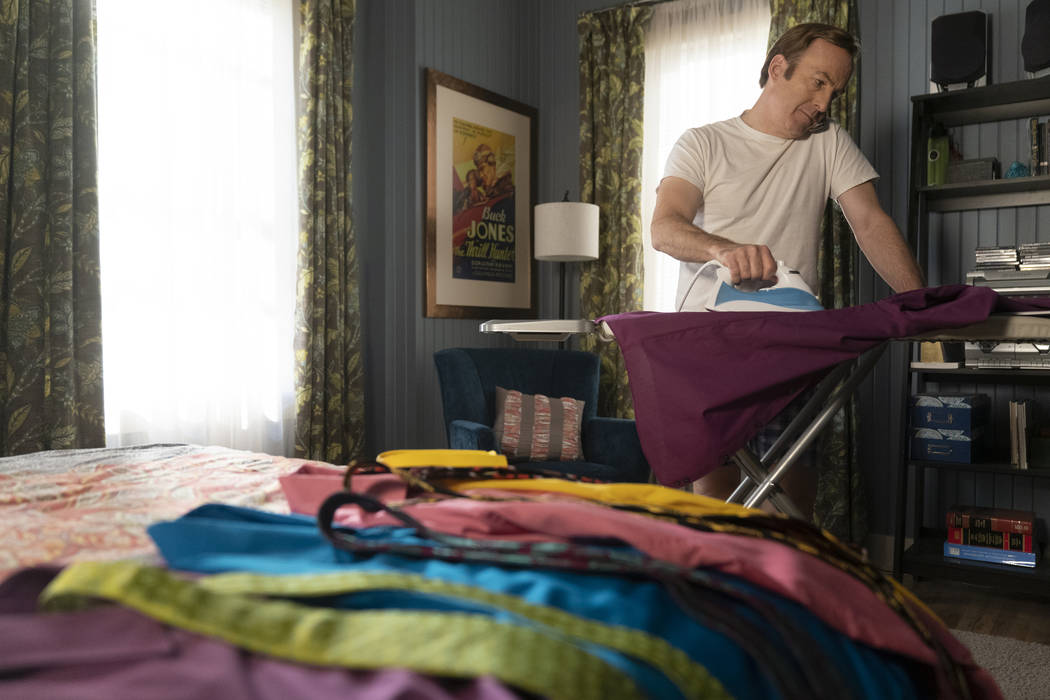 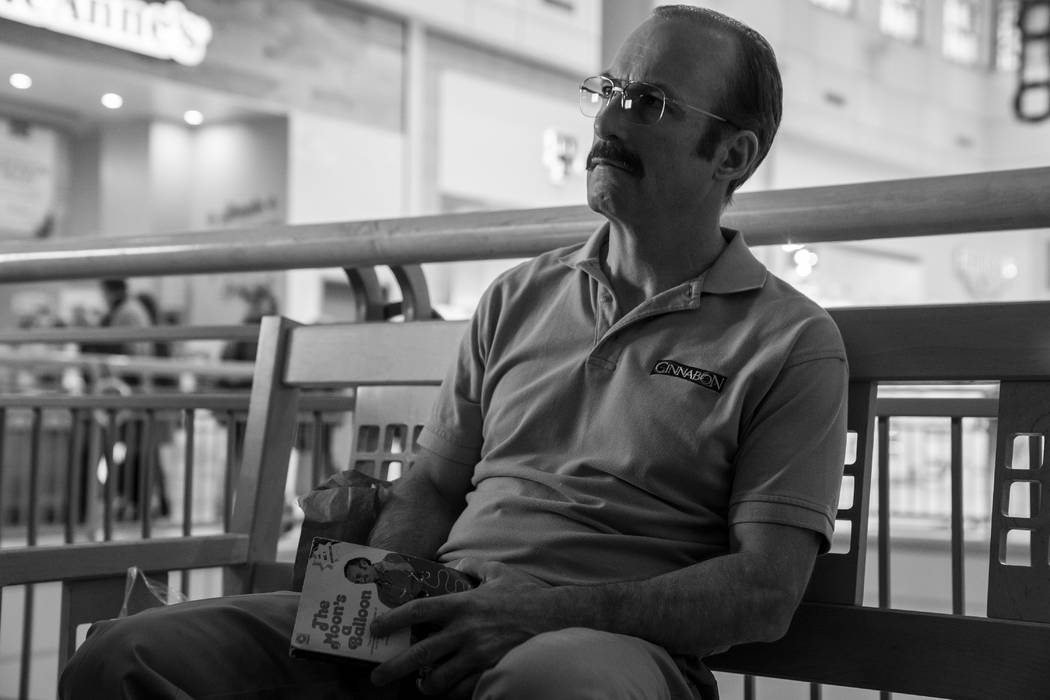 For “Breaking Bad” fans, it’s right up there with Arthur Fleck painting his face white in “Joker,” or that “Bates Motel” moment when Norman finally dons a blond wig and one of poor, dead Norma’s dresses to become Mother.

Midway through the fifth-season premiere of the prequel “Better Call Saul” (10 p.m. Sunday, AMC), Jimmy McGill (Bob Odenkirk), who’s already filed the paperwork to begin practicing law as Saul Goodman, throws open the flap of a small circus-style tent and fully embraces his inner showman, decked out in a tangerine-esque shirt beneath a maroon-ish suit.

Those descriptions are purposely vague because we’re talking about colors that don’t exist in nature.

It’s the latest piece of performance art by ol’ Jimmy Saul, the P.T. Barnum of criminal defense — minus any chance Hugh Jackman will ever make a musical about him.

Jimmy was a competent enough attorney, even though the only law school that accepted him was the University of American Samoa. (Go, Land Crabs!)

But it’s Saul Goodman, the side hustle he’s crafted over time — the alias derived from the saying “it’s all good, man” — that offers him a fresh start and a way out of the shadow of his esteemed sibling’s legal legacy.

“Jimmy McGill the lawyer is always going to be Chuck McGill’s loser brother,” Jimmy Saul explains. “I’m done with that. That name is burned.”

In the background, Jimmy Saul — that name is really starting to sound like someone Audrina would have dated on “The Hills” — is ironing a shirt. It isn’t a great shirt by any means, but its purpleness isn’t so bad, even by the standards of 2004 when the scene takes place.

Then the camera pans out, showing Jimmy Saul in his boxers, garters above his bright green socks and, on the bed, an array of clothing that looks like the donation pile after an Arsenio Hall garage sale.

It’s a lot to take in, even though the character has rarely seemed to grasp the concepts of subtlety or the boundary between enough and far too much.

Unlike fellow prequel series “Smallville” and “Gotham,” which only teased the fully wardrobed versions of their heroes in their final scenes, “Better Call Saul” was never just about Jimmy’s transformation into the shady character who laundered Walt and Jesse’s meth money.

In the hands of Odenkirk, it’s a character study of just how far down one egregiously flawed human being — one who’s even more criminally inclined than his clients — can drag those closest to him.

In his ninth season with the character, including the initial four of “Breaking Bad,” Odenkirk continues to be a revelation.

He’s come so far from his days in sketch comedy, it wasn’t that much of a shock seeing him turn up as the March family patriarch in this year’s best picture nominee “Little Women.” It’s been a heck of a journey for the former “Saturday Night Live” writer who created Matt Foley, Chris Farley’s van-down-by-the-river-living motivational speaker.

That journey still has plenty more miles to go.

“Better Call Saul” has one additional season after this one to chronicle Jimmy Saul’s descent.

And there’s one more transformation, as he’ll eventually become Gene Takovic, the manager of a Cinnabon in Omaha, Nebraska, we’ve seen in the black-and-white flash-forwards that begin each season.

Even if the series doesn’t stick with that monochromatic device, though, given those drab Cinnabon polo shirts, that metamorphosis is bound to be a lot less colorful.