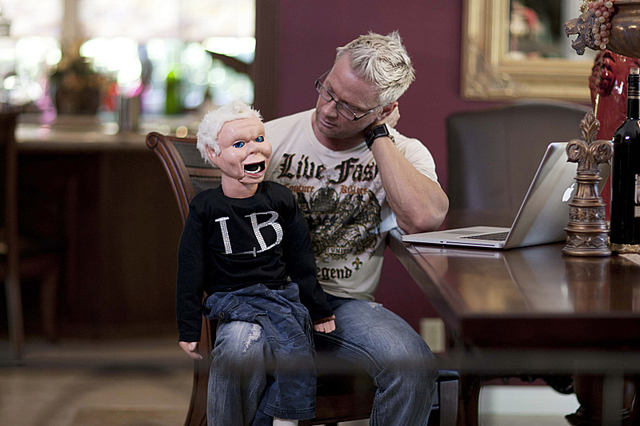 Brace gets to know his dummy doppelganger, Lil B, on Showtime’s “Gigolos.” (Josh Caine/Courtesy of Showtime)

Showtime sneaked the Las Vegas-based “Gigolos” (11 p.m. Thursdays) back onto the air without much fanfare. Well, without as much fanfare as you’d expect for a “reality” show about five guys having sex for money. So you could be forgiven if you missed last week’s fifth(!) season premiere.

And, since continuity is essential for keeping track of the exploits of Brace, Nick, Vin, Ash and Bradley, to prepare you for Thursday’s second installment, here are the six goofiest moments from the premiere:

1) While getting a mani-pedi, Nick shows off some of the tattoos he’s gotten since season four, including a dragon, a tiger and a tarantula. At this point, he’s more ink than pigment.

2) One of Nick’s regular clients pays for him to spend five hours having those tattoos — including the one on his not-so-private-anymore area — covered over with makeup. Immediately upon seeing the results, she realizes it was a mistake and starts wiping off whatever makeup wasn’t smeared all over his white suit.

3) A 41-year-old Orange County bartender named Danika tearfully opens up about an abusive relationship in which her then-boyfriend beat her up before snapping her neck in front of police. It’s a horrible, moving story. But she chose to do this on a show about guys having sex for money as part of her “journey of healing.”

4) Also as part of her “journey of healing”: stripping buck naked and going to town on Ash.

5) Brace shows off his new friend, a little wooden doppelganger he calls Lil B, who’s dressed in a bejeweled “LB” hoodie.

6) Brace says his burgeoning ventriloquism is “sexy as (excrement).” It’s SOMETHING as (excrement), all right. But “sexy” isn’t exactly the word that springs to mind.