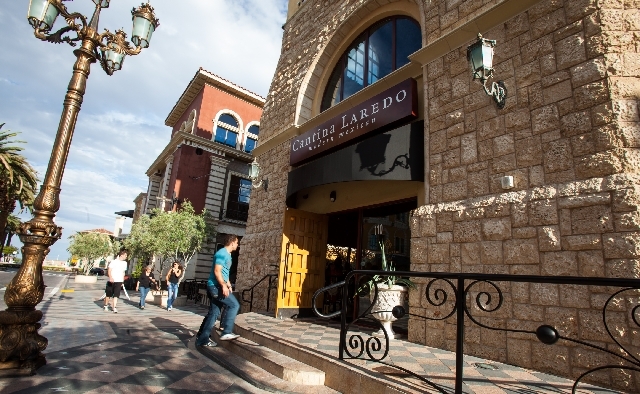 Cantina Laredo, in Tivoli Village, is a small chain that has great margaritas in a charming setting, but the service lacked enthusiasm and the food was not top-notch.

I’m far from an elitist; some of my favorite restaurants are among the least expensive, least ostentatious places you could find, mom-and-pop spots that may be tiny and almost unknown but serve flavor-filled food that conveys the passion of the people who prepare it.

The point of which is this: I will truly never understand what moves people to support restaurant mediocrity.

All over the valley, we have dozens, scores, maybe even hundreds of really good, independently owned restaurants, and yet where are the lines on Friday nights? At the chains.

I guess there’s a place for the chains, but here’s the thing: By their very nature they aim for the middle ground, cutting a broad swath that, understandably, works to be all things to all people. There are some exceptions, but the majority of them — and the places that tend to draw the lines ­— are only OK.

A case in point is Cantina Laredo, a newish place in Tivoli Village in northwest Las Vegas that’s an outlet of a smallish chain. Never mind Friday nights; on the weeknight we were there, the place was packed. The space has been extensively remodeled and it’s gorgeous, all stone and wood and very open. But the food and the service? Only OK.

Things got off to a good start, actually. Our waiter was intelligent and affable, joking a bit about how our memories would fade after a few of Cantina Laredo’s margaritas. We understood why when we tasted them; the house margaritas were very good and definitely contained their quota of tequila. Chips and two cooked salsas were served and both were well above average, the thinnish chips (that’s a good thing) warm, the salsas, one of which was quite spicy, carrying a respectable depth of multilayered flavor that was a refreshing change from the garden-variety pico de gallo we usually get.

So things were definitely looking up. And then.

First was a big service no-no. Somehow I happened to notice a runner approach the couple at the next table with two plates of food, while the couple kept shaking their heads; clearly, this wasn’t what they had ordered. Our waiter appeared to clear up the confusion. Oh, he said, those were our entrees — and picked them up from in front of the other people and set them down in front of us.

I’m not making any kind of judgments about the other couple. I didn’t pay much attention but they could have been the cleanest people in the world, and I’m sure they didn’t spit in our food.

We were saved, though; not only had we not received our appetizer (“That hasn’t come yet?” our waiter said, although we’d ordered about two minutes before) but they weren’t our entrees, either, so their journey continued.

Then a runner brought our starter, a new addition to Cantina Laredo’s menu, Quesadillas al Cangrejo ($13.79). The filling of lump crab and goat cheese and just a hint of mango-ginger salsa was really good. But the tortillas encasing it had been browned so much that they were hard, making them difficult both to cut and to chew.

One thing I really like about Cantina Laredo’s menu is that it goes beyond the usual suspects, and Enchiladas de Espinaca ($11.59) held great promise because of a filling of spinach, mushroom and Monterey Jack cheese. But here’s the thing: Although a filling — dish, whatever — may be primarily savory, that’s not to say it need have no soul, no spice, and that’s pretty much how this was. The beans and rice on the side mirrored that, the black beans tasting as though they had come straight out of a can, the rice your basic tomato-colored variety.

Our waiter had tempted us with a special that evening, red snapper Veracruz ($21.29). It would, he said, have a light creamy sauce, flavored with capers and olives and he couldn’t remember what else. The idea sounded great, but the reality not only didn’t match but reminded me of two restaurant truisms, the first that a restaurant’s special is what the chef is trying to get rid of (more and more a fallacy in these days of farm-to-table focus) and second that, as an old outdoors writer once told me, a lot of restaurants were taking red snapper off the menu since grouper (and the like) had become more scarce.

That one’s still true, especially since Nevada has no truth-in-menus law, and the problem is compounded by the blurry lines that differentiate fish species. But as I tasted this one, I knew that red snappers were weeping everywhere. This should be a fairly mild, fairly firm fish, but instead it was slightly fishy and mushy, almost watery. Red snapper? Maybe, if it had been frozen for a long time. And the promised sauce was not only not creamy but extremely lackluster, little more than oil and maybe some vinegar with a few halved green olives, some onion, a few pieces of diced avocado and exactly one caper. The cilantro rice was better than the tomato-colored one, but the sliced zucchini on the side, although at least fresh, was only a shade past raw.

And as our waiter cleared our plates, he no doubt noticed that we’d consumed little of the fish but didn’t ask if it was OK, didn’t ask if we wanted a doggy bag, didn’t ask anything. Actually, affable or not, he only asked us a few questions during the course of our dinner, including, as he cleared the appetizer plate, “Do you want to keep your knife?” (Well, wouldn’t your loss-prevention people mind? Oh, does that mean you won’t bring me a clean one?) and “Would you like another margarita?”

Maybe that’s the appeal for the crowds who pack this smallish chain — a showpiece interior and margaritas strong enough to make you lose your memory. Because the food and service are only OK.