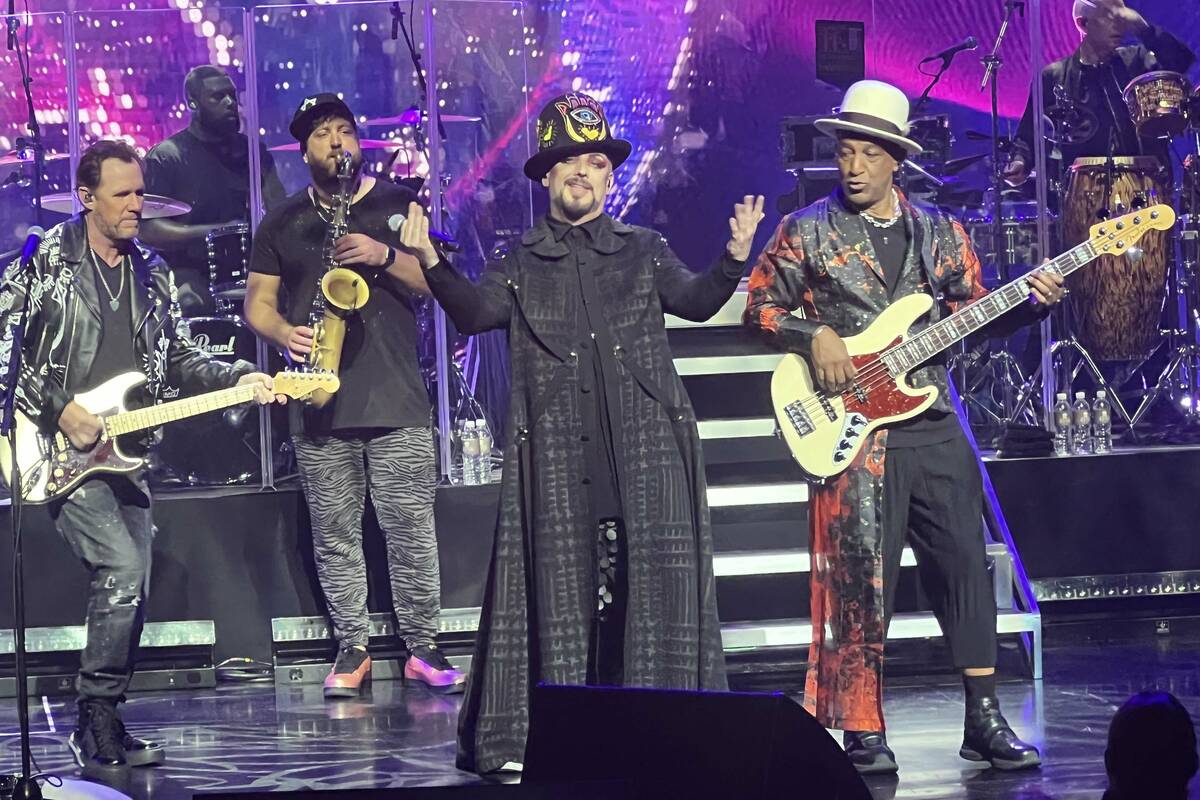 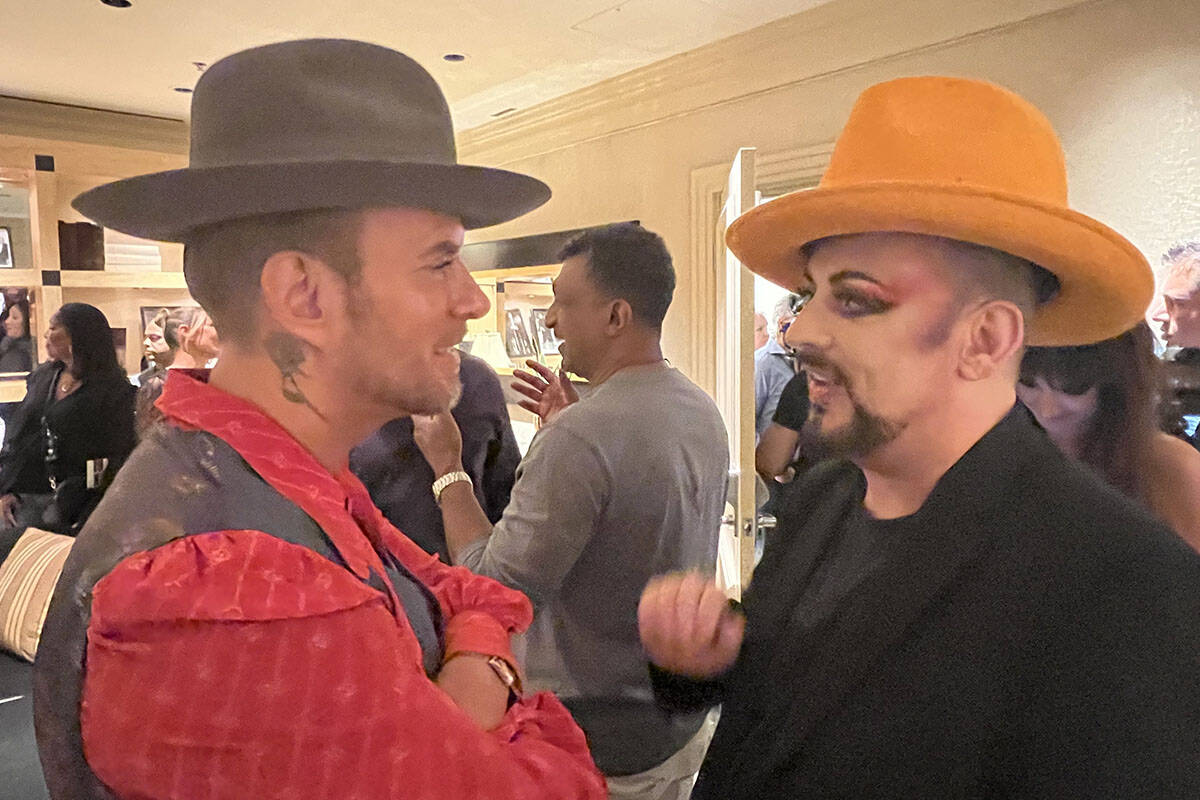 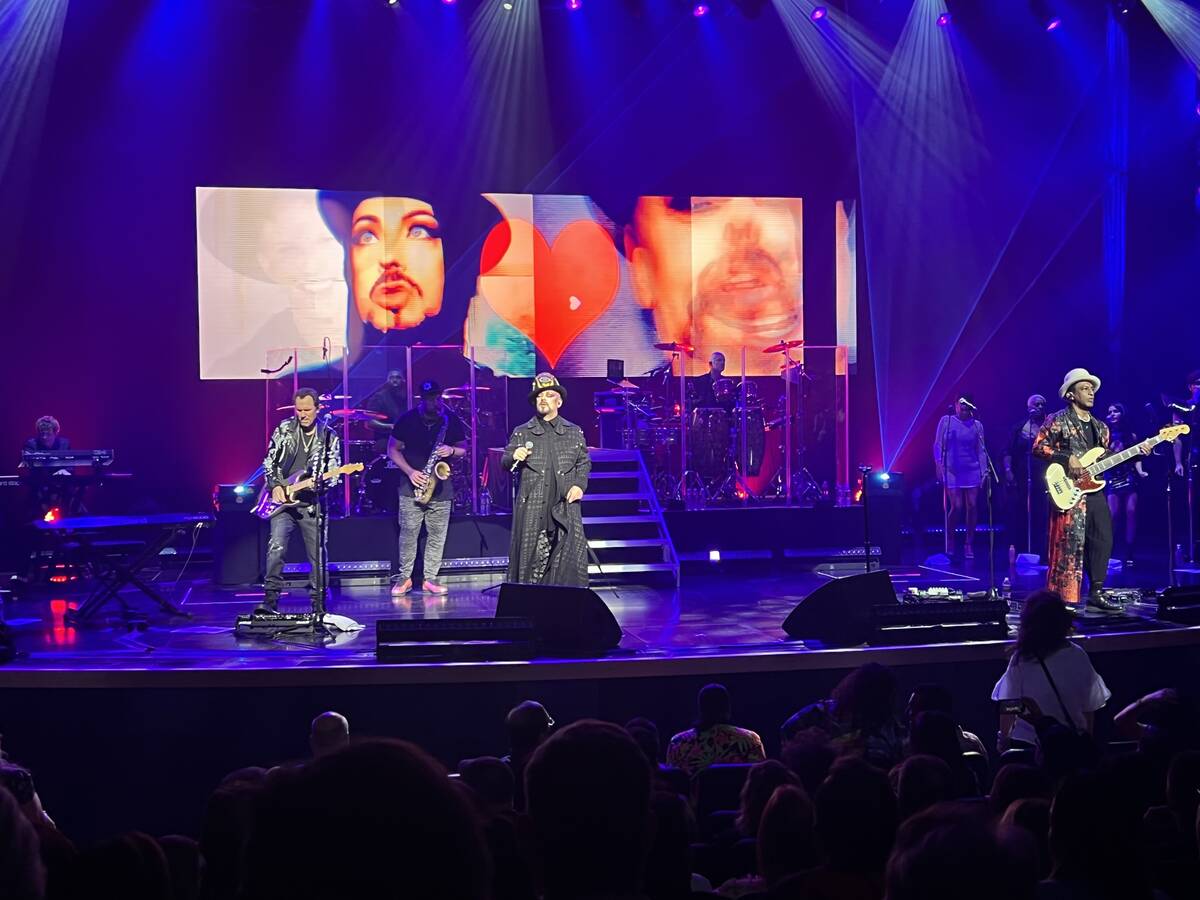 Be ready to have your music sensibilities rocked once more.

”Behind The Music,” the documentary series that once tracked the triumphs and travails of recording artists, is resurfacing Tuesday on Paramount+.

Las Vegas is the setting for one of the stars featured in this batch of new shows.

The episode centering on Boy George and Culture Club was taped in June, when the band headlined Encore Theater at Wynn Las Vegas (the band returns to the Wynn on Feb. 15 and 18-19). Venerable Vegas broadcast journalist Stacey Gualandi produced, and also conducted the interviews.

“BTM” originally aired from 1994 to 2014 on VH1, coming to life with a laudable retelling of the Milli Vanilli saga. Dozens of superstars, from Bon Jovi to The Bangels to Barry White, appeared on the original series. So did Culture Club, in the third episode ever, following Milli Vanilli and MC Hammer.

For Culture Club’s return to the series, Gualandi interviewed Boy George at the Thriller Villa, the estate on Palomino Lane that Michael Jackson once rented. The manse is currently home to the Liberace Museum collection.

George is a Liberace devotee dating to at least the early 1980s. He even called out, “Liberace sent me!” to close his Encore Theater performances.

“The episode kicks off when George arrives at the location, and he was like a kid in a candy store, walking through those outfits, checking out his old pianos and all of the old photographs,” series co-executive producer Alex Castino says. “What’s really interesting is, after the fact, he wrote a song based on his day at the museum. It’s not out yet, and I’m not even sure what the title is.”

Castino tried to include the song in the closing credits.

“There were clearance issues with our tight schedule, so we couldn’t include it,” he says. “But I think it was a special day for him.”

“What we found in doing all the research on Boy George, back when he was on the rise, he was constantly name-checking Liberace,” Gualandi says. “He was someone that we knew in the U.S., and his message was, if you can accept Liberace, you can accept Boy George.”

George’s addiction, recovery and status as an LGBTQ+ pop-culture icon are charted.

Aldean and Lopez also bring strong links to Las Vegas. Aldean, of course, was onstage at Route 91 Harvest the night of the Oct. 1 mass shooting. “Six songs in, I heard the guy open up,” Aldean says in the promo clip. “The worst night of my life.”

Lopez hosted a residency production at Zappos Theater, and she and Ben Affleck were married in a hastily arranged ceremony at A Little White Wedding Chapel in downtown Las Vegas.

Be ready for the type of unvarnished commentary for which “BTM” is famous. As Michaels says, “I’m grateful to be here, on many different levels.”

On the topic of what is behind the music …

We swept into one of Culture Club’s performances in June alongside Boy George’s friend Matt Goss and Goss’ girlfriend, the model and jewelry designer Chantal Brown. The Goss-A-Rator has just opened pre-sale for his Christmas single, “The Beautiful Unknown,” due out Dec. 2.

Goss recorded the song with members of the Royal Philharmonic Orchestra. This is the title track from his most recent album, released last spring.

At the time we hung with Goss and George, talk of a possible Goss residency on the Strip was rampant — rampant, I tell you! The two Brits talked of possibly cross-promoting their respective shows.

That didn’t happen. But the cha-cha did.

Goss has since moved back to London, where he competed in Season 20’s “Strictly Come Dancing” contest series on BBC One. Gossy and his professional dance partner Nadiya Bychkova, were eliminated in Week 4.

The series is ongoing, but honestly I’ve not heard of any of the remaining celebs or pro dancers. We know Goss, though, who presided over cool hangs for more than a decade on the Strip. Tap us when he’s coming back to VegasVille.

The next Oscar’s Dinner Series, hosted as always by Oscar Goodman, is also the last of 2022. Wednesday night’s theme is “Odds & Ends. Short Stories with Oscar.”

The former mayor of Las Vegas is touching on such topics as, “My Mother and the Mob,” “Frolicking in the Bathroom at Leavenworth Penitentiary,” and “The Real Relationship Between Sandy and Teddy.” The latter is a reference to Sandy Murphy and Ted Binion, and the famous Binion murder case.

Goodman encourages guests to ask questions. He’s into being cross-examined these days. Table reservations and related information are at plazahotelcasino.com.

Daniel Emmet, both a column fave and a fave of “America’s Got Talent,” has released his latest single, “You’re The Inspiration.” His next album, self-titled, is due out Dec. 16.

Emmet was a top-10 finalist on season 13 of “AGT” in 2018. He’s since returned to the show along with members of the AI act Metaphysic, which created Simon Cowell’s image over Emmet as he sang, “You’re The Inspiration.” Yes, that performance was the inspiration of Emmet’s latest single.

And a fun fact, Emmet has made nine appearances on “AGT” (counting his unaired season six audition), tying him with dance ensemble All That! for the most by any artist.

The 29-year-old showman and the similarly wondrous Pia Toscano return June 1 to Westgate’s International Theater. Their performance at International in August, which was happily interrupted by David Foster, airs on Vegas PBS at 7:30 p.m. Monday, 9:30 p.m. Tuesday, and 6:30 p.m. Sunday.

Emmet had been singing around town in small venues, and was also featured in “The Cocktail Cabaret” at Cleopatra’s Barge, when he took off on “AGT.”

The highlight of his run was switching off his original composition, “Amante,” for “Passera,” at Cowell’s insistence. Emmet has since headlined an extended engagement at the Barge, pre-closing. As the star singer says, “The impact of my time on ‘AGT’ can’t be underestimated.”

Vegas icons abound — abound, I tell you! — at Italian American Club this weekend.

The inspired variety show “Mavericks” at Cheapshots Showroom & Discotheque on Fremont East is about to go dark for the rest of 2022. Saturday is the final performance of the year.

What will happen next? Creator Amy Saunders, stage name Miss Behave, says, “I don’t know!” But she promises surprises as the show is re-established next spring.

The club will continue normal operations, it’s just the show that’s on pause. Similar to when Miss Behave plunges a sword down her throat, we’re nervous about long pauses with no specific return dates. But the mistress of the manor knows what she’s doing. We have the faith.

Find the D Las Vegas and Circa co-owner Derek Stevens grooving it up with Flo Rida, and several revelers in onesies, Wednesday night on the Fremont Street Experience’s annual “Drinksgiving” celebration.

This is on Derek’s wife Nicole Stevens’ Instagram feed @dereksnicole, among other places. You could build a show around those moves.

The Clairvoyants, co-stars in the original cast of “America’s Got Talent: Live!” at Luxor, have announced they are more than stage partners. They are now married, having performed the ceremony at A Little White Wedding Chapel on Oct. 30. The entertainment pair of Thommy Ten and Amélie van Tass were runner-ups on on season 11 of “AGT.”

The event was a shock to the couple’s former castmates at Luxor. Slam poet and season 15 champ Brandon Leake posted, “What?” on the couple’s announcement on Instagram. The whole thing was a secret, up until the couple honeymooned to Austria to visit friends and family. The couple has performed 500 shows with “AGT” in Las Vegas.