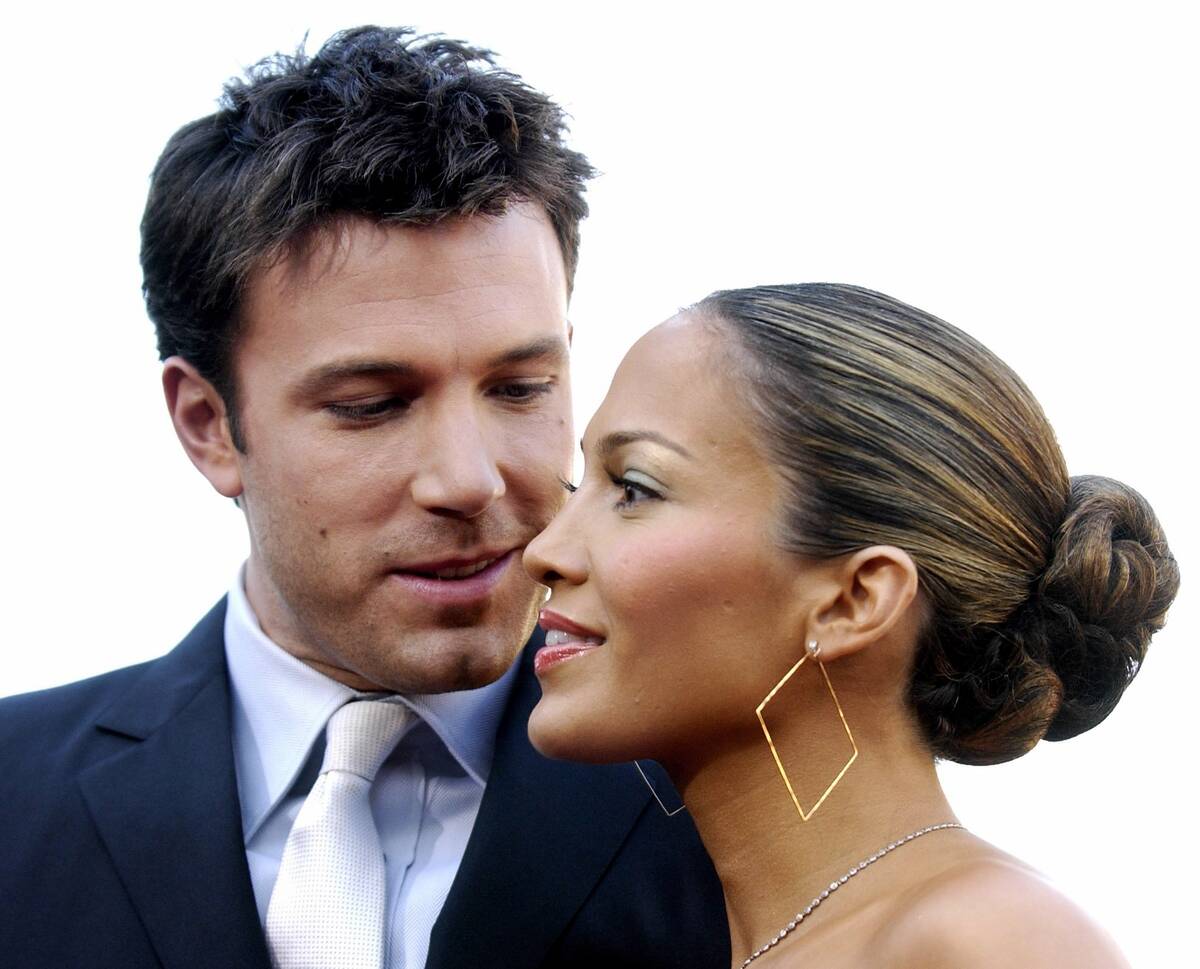 In this file photo, "Daredevil" star Ben Affleck and his fiancee', actress/singer Jennifer Lopez, arrive at the premiere of the film in the Westwood section of Los Angeles, Sunday, Feb. 9, 2003. (AP Photo/Chris Pizzello) CHRIS PIZZELLO 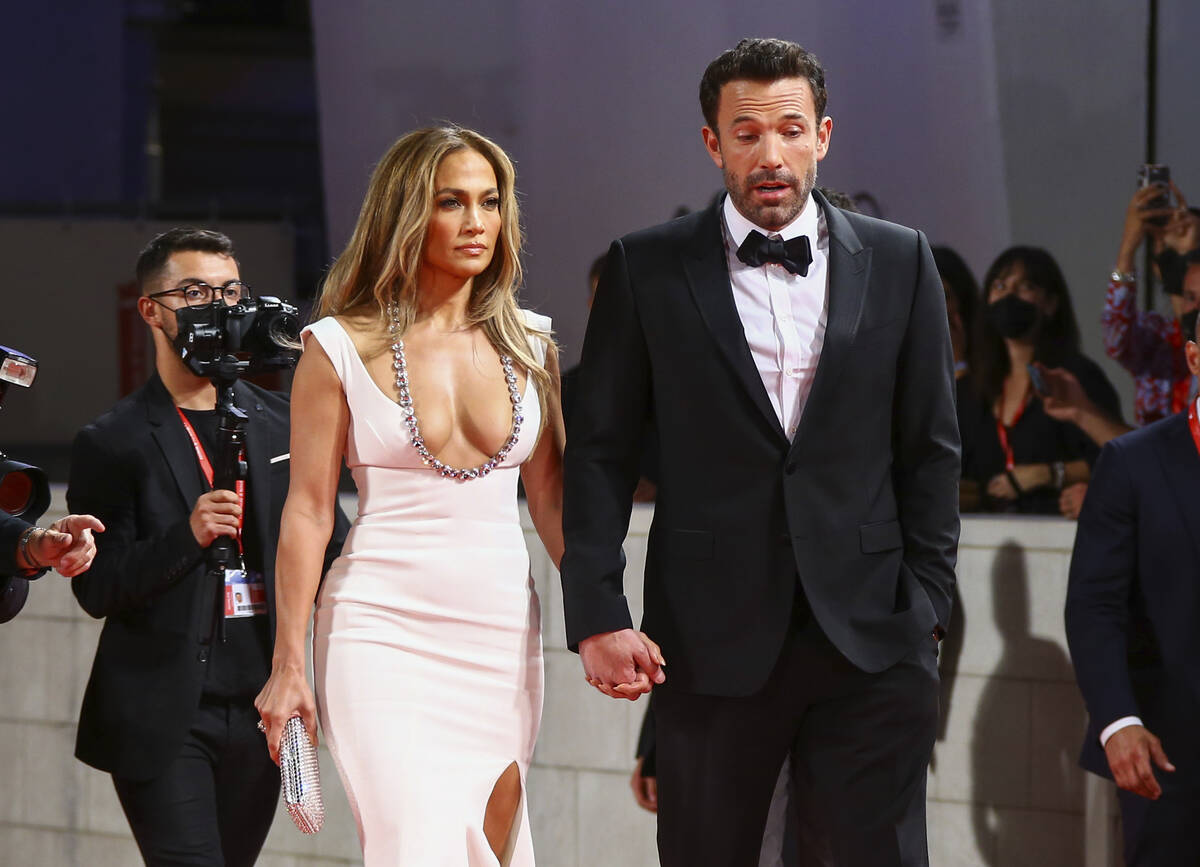 Jennifer Lopez, right, and Ben Affleck pose for photographers upon arrival at the premiere of the film 'The Last Duel' during the 78th edition of the Venice Film Festival in Venice, Italy, Friday, Sept. 10, 2021. (Photo by Joel C Ryan/Invision/AP) 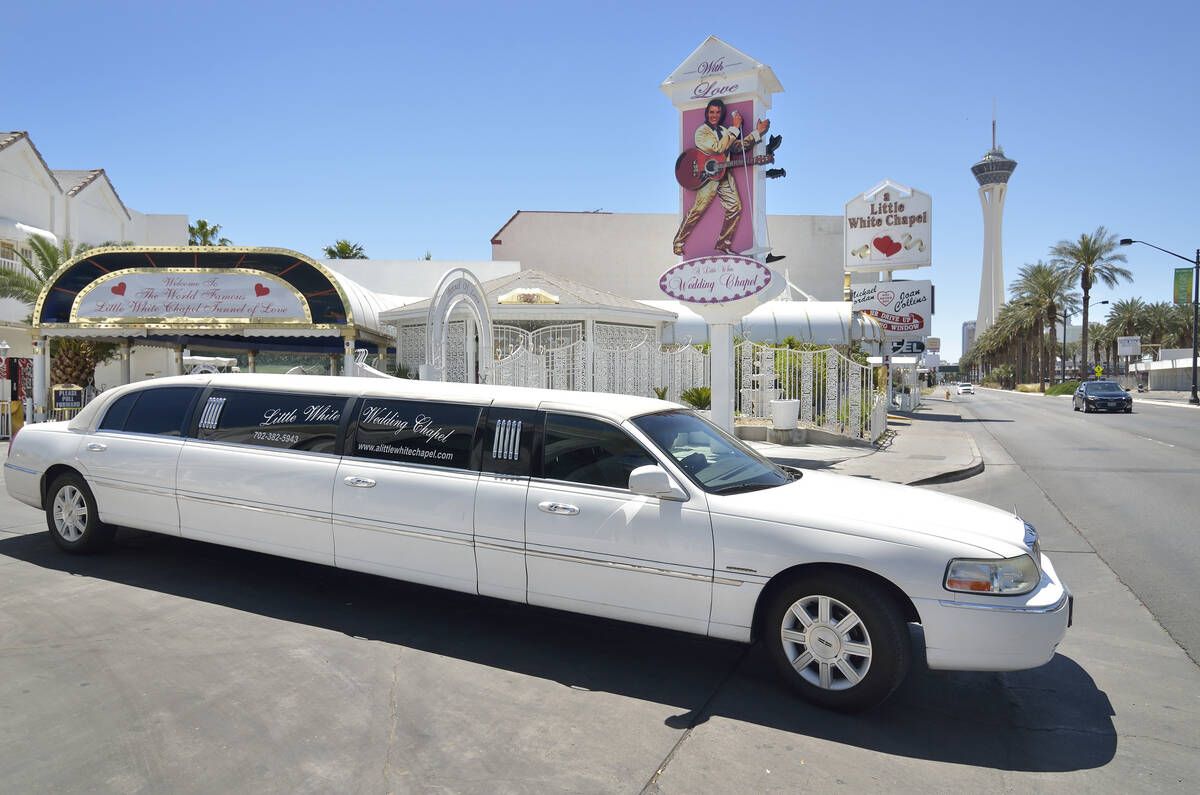 “Bennifer” have eloped in an overnight ceremony in Las Vegas.

“We did it,” Lopez wrote in a message posted to her “On The Jlo” online newsletter. “Love is beautiful. Love is kind. And it turns out love is patient. Twenty years patient.”

The license was issued to Benjamin Geza Affleck and Jennifer Lopez, who is also identified as Jennifer Affleck. The couple then trekked to A Little White Chapel, established in 1951. The chapel has married about 800,000 couples. Frank Sinatra and Mia Farrow, Bruce Willis and Demi Moore, Michael Jordan and Juanita Vanoy, and Paul Newman and Joanne Woodward are among the stars to hold ceremonies at the chapel.

Lopez continued, “Exactly what we wanted. Last night we flew to Vegas, stood in line for a license with four other couples, all making the same journey to the wedding capital of the world. Behind us two men held hands and held each other. In front of us, a young couple who made the three-hour drive from Victorville on their daughter’s second birthday — all of us wanting the same thing — for the world to recognize us as partners and to declare our love to the world through the ancient and nearly universal symbol of marriage.”

Lopez said the couple barely made it to the chapel before it was scheduled to close at midnight. “They graciously stayed open late a few minutes, let us take pictures in a pink Cadillac convertible, evidently once used by the king himself (but if we wanted Elvis himself to show, that cost extra and he was in bed).”

That would be a bummer for any number of Elvis tribute artists who work downtown. Those chapels have recently worked out a licensing agreement with the Authentic Brands Group, which oversees Presley’s name and likeness.

“So with the best witnesses you could ever imagine, a dress from an old movie and a jacket from Ben’s closet, we read our own vows in the little chapel and gave one another the rings we’ll wear for the rest of our lives. They even had Bluetooth for a (short) march down the aisle. But in the end it was the best possible wedding we could have imagined. One we dreamed of long ago and one made real (in the eyes of the state, Las Vegas, a pink convertible and one another) at very, very long last.”

Goya said the couples in the bureau’s lobby recognized Affleck, 49; and Lopez, 52. Affleck and Lopez had filled out their application online, and Affleck produced the confirmation number when stepping to the counter.

“The issuing clerk said that they were really nice,” Goya said. “They came in and waited in line like everyone else.”

The couple didn’t ask for special treatment, and declined to be photographed by those in the room. Lopez wore a long, white, sleeveless dress and Affleck wore a white dress shirt, white pants and a dark tie with a dark jacket. They changed at the chapel.

“When love is real, the only thing that matters in marriage is one another and the promise we make to love, care, understand, be patient, loving and good to one another,” Lopez said. “We had that. And so much more. Best night of our lives. Thank you to the Little White Wedding chapel for letting me use the break room to change while Ben changed in the men’s room.”

Affleck and Lopez dated and became engaged in the early 2000s. The spent nearly two decades apart before rekindling their relationship last year. News of their second engagement surfaced in April. Lopez shared a video for her fans, crying and showing off her 6.1 carat green-diamond ring from Harry Winston. She posted, “Saturday night while at my favorite place on earth (in a bubble bath), my beautiful love got on one knee and proposed.”

In her Sunday post, Lopez referred to the couple’s trip through the Las Vegas “tunnel of love.”

“They were right when they said, ‘All you need is love.’ We are so grateful to have that in abundance, a new wonderful family of five amazing children and a life that we have never had more reason to look forward to,” Lopez said. “Stick around long enough and maybe you’ll find the best moment of your life in a drive through in Las Vegas at twelve thirty in the morning in the tunnel of love drive through, with your kids and the one you’ll spend forever with. Love is a great thing, maybe the best of things-and worth waiting for.”

Lopez has been involved in a Vegas ceremony prior to Saturday night. In October 2008, she and recording star Marc Anthony renewed their wedding vows in the Forum Tower Penthouse at Caesars Palace. Lopez was also engaged to ex-Major League star Alex Rodriquez before they split up in 2021 after a four-year relationship.

The Marriage Bureau has redoubled efforts to present Las Vegas as an international wedding destination.

“This is the biggest couple we’ve had in a long time,” Goya said. “They are equal to any movie-star couple. They are A-list.”

Over the decades, such icons as Newman and Woodward, Ann-Margaret and Roger Smith, Kirk Douglas and Anne Buydens, and Francis Ford Coppola and Eleanor Jesse Neil have all been married in Las Vegas. All of those couples made it to their 50th anniversaries.

“Broadway With a Twist,” a potpourri of musical-theater faves, performs at 7:30 p.m. (doors at 6 p.m.) Thursday at The Nevada Room at Commercial Center. Bill Fayne is the pianist/music director, with Jay Joseph, Joy Demain, Ayler Evan and Amanda Kaiser singing the show tunes. Some of the male songs are sung by the ladies, and vice versa. It’s crazy — crazy, I tell you! Tickets are $15, $25 for VIP (not including fees). Go to vegasnevadarooms.com for info.