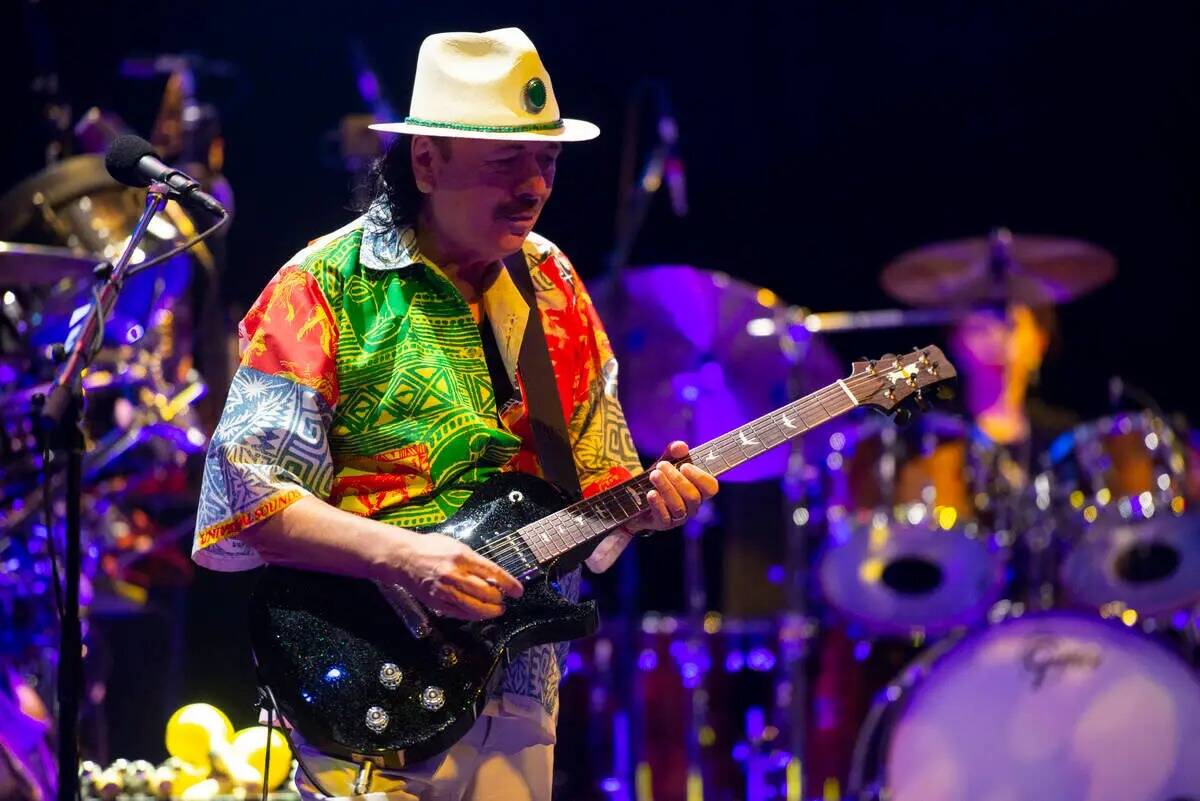 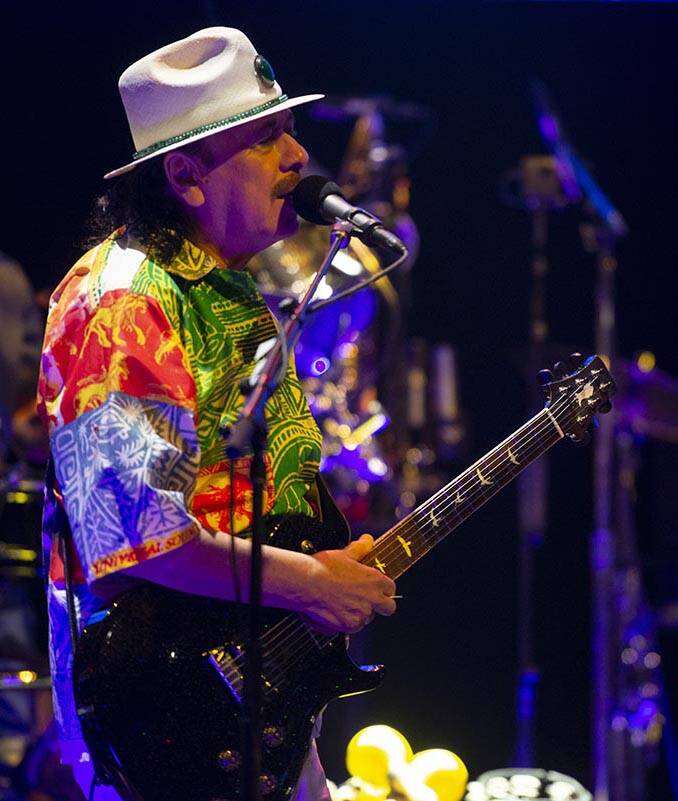 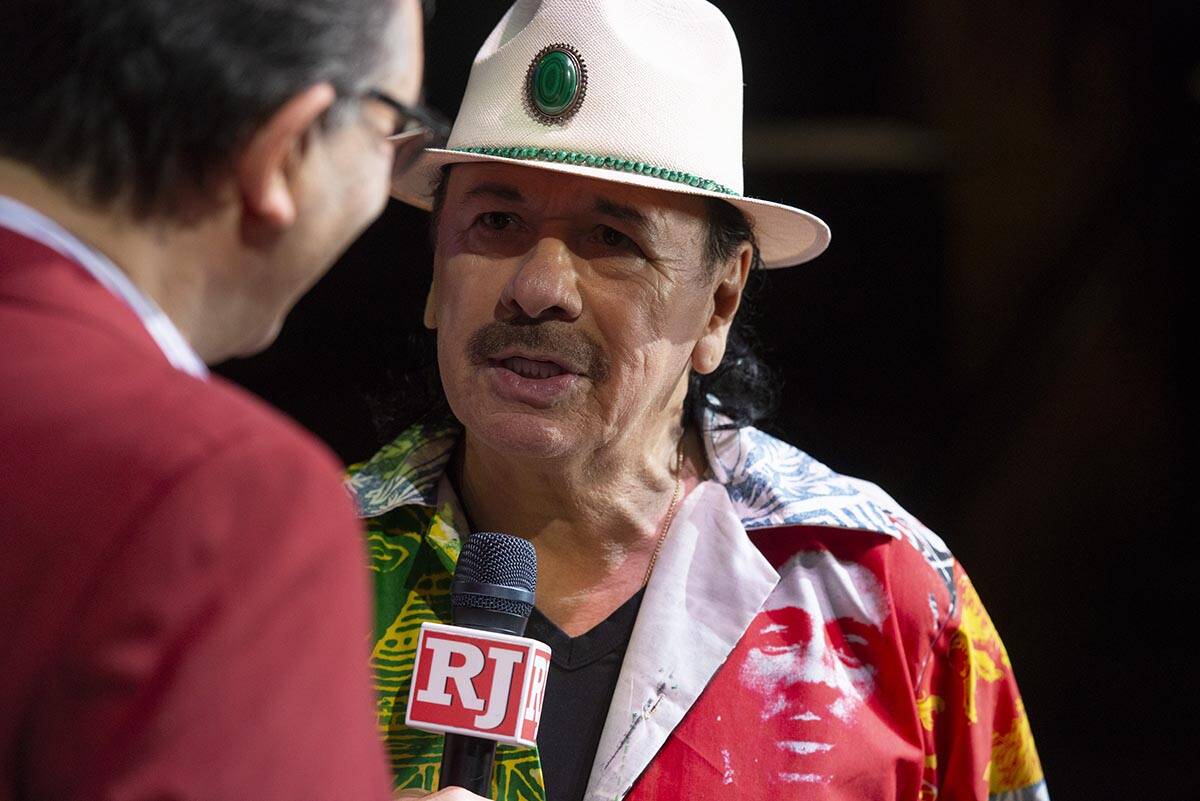 Carlos Santana talks to the Review-Journal's John Katsilometes during a press conference to announce an extension of Santana's residency at the House of Blues Las Vegas on, Wednesday, May 18, 2022, in Las Vegas. (Steel Brooks/Las Vegas Review-Journal)

Carlos Santana insists he will be back onstage at House of Blues at Mandalay Bay when his Strip residency resumes in September. But he is knocking off dates before then, taking health precautions after collapsing at a show in Michigan on Tuesday night.

Vrionis was asked Saturday if Santana would be healthy enough to pick up his House of Blues performances Sept. 14. The manager responded, “Oh, yes.”

“Doctors have recommended that Mr. Santana gets rest to recuperate fully,” Vrionis said, in a message posted on the rock legend’s social media pages. “He is doing well and is anxious to be back on stage soon. He just needs rest. He profoundly regrets that these postponements of his upcoming performances; but, his health is our number one concern.”

Santana halted his show Tuesday at Pine Knob Music Theater in Clarkston, Michigan, about 40 miles northwest of Detroit. The 74-year-old guitar great was performing “Joy,” his collaboration with Chris Stapleton from Santana’s “Blessings and Miracles” album when he moved to the drum riser, then fell backward.

Vrionis said afterward Santana had fallen victim to heat exhaustion and dehydration. He was treated and released from McLaren Clarkston hospital.

Santana also suffered a heart episode in November, which took him out of his December schedule at House of Blues. He has since signed a five-year extension. The Santana residency is scheduled to perform eight shows in September, returning in November. As Vrionis said, “He is looking forward to seeing all of his fans very soon.”

The 160-seat venue is just south of Able Baker Brewing and across from Wiseguys Comedy Club. That space has been unused for at least three years. This opening has been so far under the radar that neither Troy Heard, who operates Majestic Repertory Theatre in the Arts District, nor yours truly (who lives near there) knew of these plans until last week. But the crew at Able Baker is hoping for success. LaMarre Theater’s crowd should be an imbibing bunch.

In the swing with Celine

The recording superstar has been a resident in that community for several years, even as she has been building a new estate at Summit Club in Summerlin.

About a year ago, a new Lake Las Vegas resident was playing SouthShore Country Club. Dion’s home is along one of the fairways. As the golfer set up to hit from that spot, he took out a Bluetooth speaker and cranked up “My Heart Will Go On,” loud enough for Dion to hear. The singer heard her own hit, poked her head out and waved in approval.

Goss, holograms … and you

Longtime Vegas headliner Matt Goss, who continues to scout options for a possible return to Strip residency, has posted videos alongside a hologram of himself in a glass box with Proto Hologram technology. The Gossy’s message, “This is the future!” Word is he is looking to perform with a hologram of Dean Martin. So we need some hologram scotch, right?

But really, Goss has met with company reps to investigate how to incorporate the technology onstage. Ellen DeGeneres, Howie Mandel and Shaquille O’Neal have also recently tried out the hologram approach. I understand this technology can re-create a departed legend. The company is also pursuing a deal with the estate of the late rapper DMX. Holograms know no artistic limits.

We’re keeping an eye on …

Ambitious upgrades for live entertainment at Ghostbar at the Palms. Watch for more from that rooftop annex.

Brian Newman took to the Newman Strip (the walkway between booths at NoMad Library) while singing the Willie Nelson classic “Night Life” on Thursday night. Midway through the song, Newman caught a guest walking toward a table and said, “Hey! You’re late!” The woman called back, “I have been here! I was just in the bathroom!” Newman answered, “Just kidding!”

The exchange broke up the room, and Newman totally lost the lyrics. We at least give him credit for paying attention.

Newman also interrupted the song in April, succumbing to hiccup after taking a shot of Johnnie Walker Black Label whiskey. The song has become a scene-setter.

The Funk Jam returns to Sand Dollar Downtown at the Plaza at 10 p.m. Wednesday. Bassist and bandleader Anthony James has created a band, a show and a hang from 10 p.m.-2 a.m. No breaks, no cover, no hassles, mon. And try the pizza.