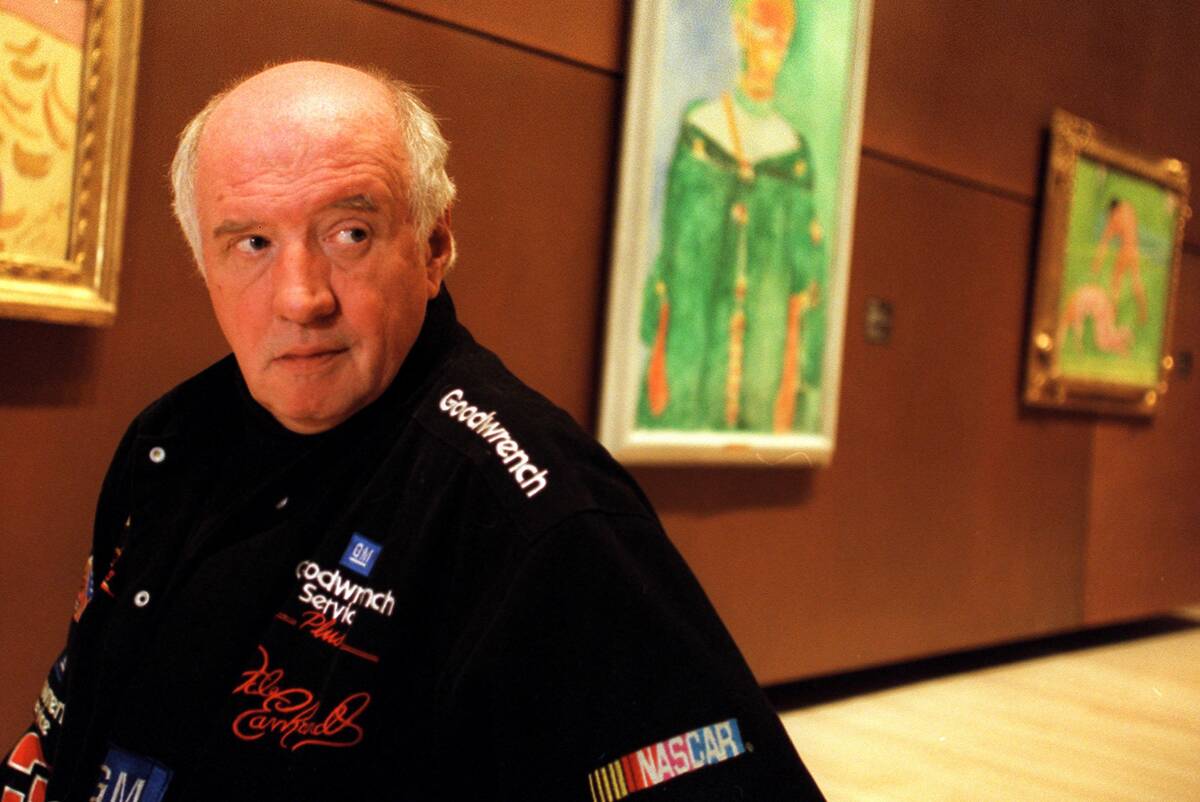 Former UNLV professor and art critic Dave Hickey is shown posing in front of Henri Matisse art at The Venetian in this undated photo. He is among the members of the 2020 class of the UNLV College of Fine Arts Hall of Fame. (Review-Journal file)

Dave Hickey was Las Vegas’ resident genius for two decades. He won a grant honoring him as such. But Hickey’s genius was evident even without that award, in his sometimes haunting description of this city.

Long after he moved out of Vegas, Hickey told the biographer Daniel Oppenheimer in “Far from Respectable: Dave Hickey and His Art,” of witnessing the Oct. 1, 2017, shooting at Route 91 Harvest festival.

“The field of the concert looked like glowing coals,” Hickey said. “Glow, glow, glow. It was everybody’s cell phone. Isn’t that sad?”

Hickey and his wife, Libby Lumpkin, lived in Las Vegas for nearly 20 years, leaving in in May 2010 for positions at the University of New Mexico. The couple has since resided in Santa Fe. Hickey retired in about seven years ago from his position as professor of practice at UNM.

“I think he would primarily want to be remembered as a teacher. He loved his students,” Lumpkin said in a phone chat Saturday. “Let me tell you, it’s been an outpouring for him. I’m getting calls from students I’ve never even known.”

Lumpkin said Hickey had a unique affection for Las Vegas.

“Dave felt that Las Vegas had a culture where everyone was equal, because there was no institution that had a very deep past,” Lumpkin said. “He felt there was a freedom of inventing oneself in Vegas that was more possible than anywhere else on Earth. He saw it as a particularly American city.”

Lumpkin, too, was an influential figure in the Vegas cultural community as the first curator of Bellagio Gallery of Fine Art, and later executive director of the Las Vegas Art Museum. Lumpkin also was the original curator for the art exhibited at the Cleveland Clinic Lou Ruvo Center for Brain Health, ahead of its 2010 opening.

Speaking on behalf of UNLV, College of Fine Arts Dean Nancy Uscher said in a statement, “We in the College of Fine Arts at UNLV were deeply saddened to learn of the passing of David Hickey, who had served on the faculty in the Department of Art and was beloved by the many students he taught and mentored over the years. He has been widely celebrated and honored nationally and internationally for his distinctive contributions as an art critic, writer and extremely influential thought leader.”

Hickey was inducted into the College of Fine Arts Hall of Fame in April. The critic was not able to attend the ceremony. Hickey’s last bookings at UNLV were a pair of lectures at the Marjorie Barrick Museum of Art on Sep. 25 and Oct. 2, 2017.

Hickey’s celebrated literary and critical career was offset by his affinity for a solid casino hang. He especially enjoyed a good smoke and gambling spree at Eureka Casino on East Sahara Avenue, where he was often spotted with a cigarette while jabbing at slot machine buttons. Hickey’s friends often remarked that his $500,000 MacArthur award was “invested” at the casino.

Hickey was a long-published author who gained international acclaim. His work appearing in Rolling Stone, Art News, Art in America, Artforum, Harper’s Magazine and Vanity Fair, among other magazines. A busy book writer, Hickey authored “The Invisible Dragon” in 1993 (expanded in 2012), “Air Guitar: Essays on Art and Democracy” in 1997, “Pirates and Farmers” in 2013 and “25 Women: Essays on Their Art” in 2016. The compilations “Wasted Words: The Essential Dave Hickey Online Compilation” and “Dust Bunnies: Dave Hickey’s Online Aphorisms June 2014-March 2015” were also issued in 2016.

The final two books were Hickey’s rants about writing on Facebook, which he’d reluctantly embraced in his failing health. At the time of writing, he’d posted nearly 3,000 comments and collected 700,000 responses.

“Please know that I am never going to find the “right voice” for Facebook. I am adversarial … You guys want Al Roker,” was one sample. In another, he asked, “Why keep on? Because I have about 7,500 friends and followers and it only takes one to change the world, and they will tell me who they are.”

While living in Las Vegas, Hickey was was inducted into the Nevada Writers Hall of Fame by the University of Nevada, Reno in 2003. His 2006 PBS documentary about Andy Warhol won a Peabody Award.

Hickey once said in a Las Vegas Weekly profile that he and Lumpkin initially “fell in love” with Las Vegas. “We saw in it the possibility of a major art scene and a wonderful art school. Vegas had everything. It was streamlined for working hard and playing hard, without a lot of downtime in between. The city was full of state-of-the-art popular art — and it was mostly bad, of course, but this still made Vegas better than cities with no art at all.”

He continued, “One didn’t have to invent the idea of art in Vegas or sell it to a visually impaired population — in Vegas one need only make better art to challenge the not-so-good art, and let the good drive out the bad, as it usually does in the realm of the visible.”

Bavington said Saturday that Hickey was the reason he entered graduate school to study art at UNLV.

“I met Dave when I was in my 30s, and a few years later my dad passed away.” Bavington said. “He became like a second father to me. He was that kind of figure to a lot of his students, not just me. I feel his legend will only grow in his passing.”