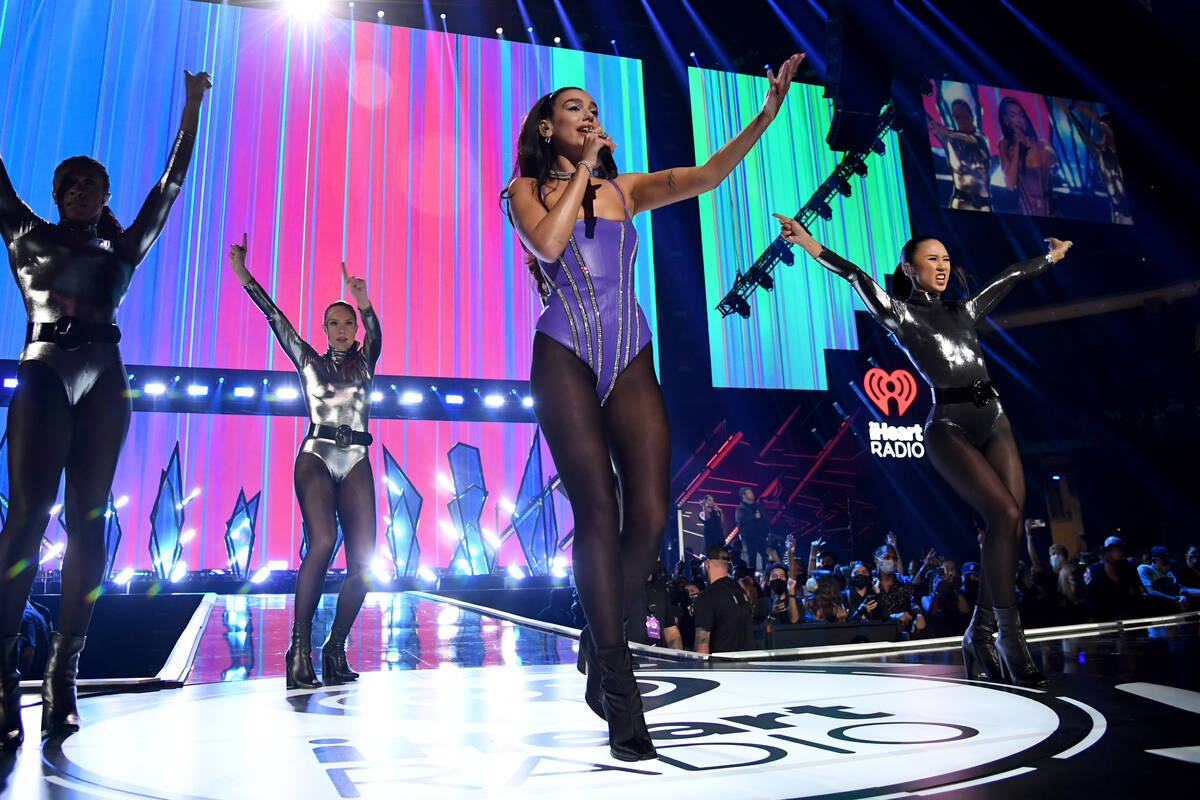 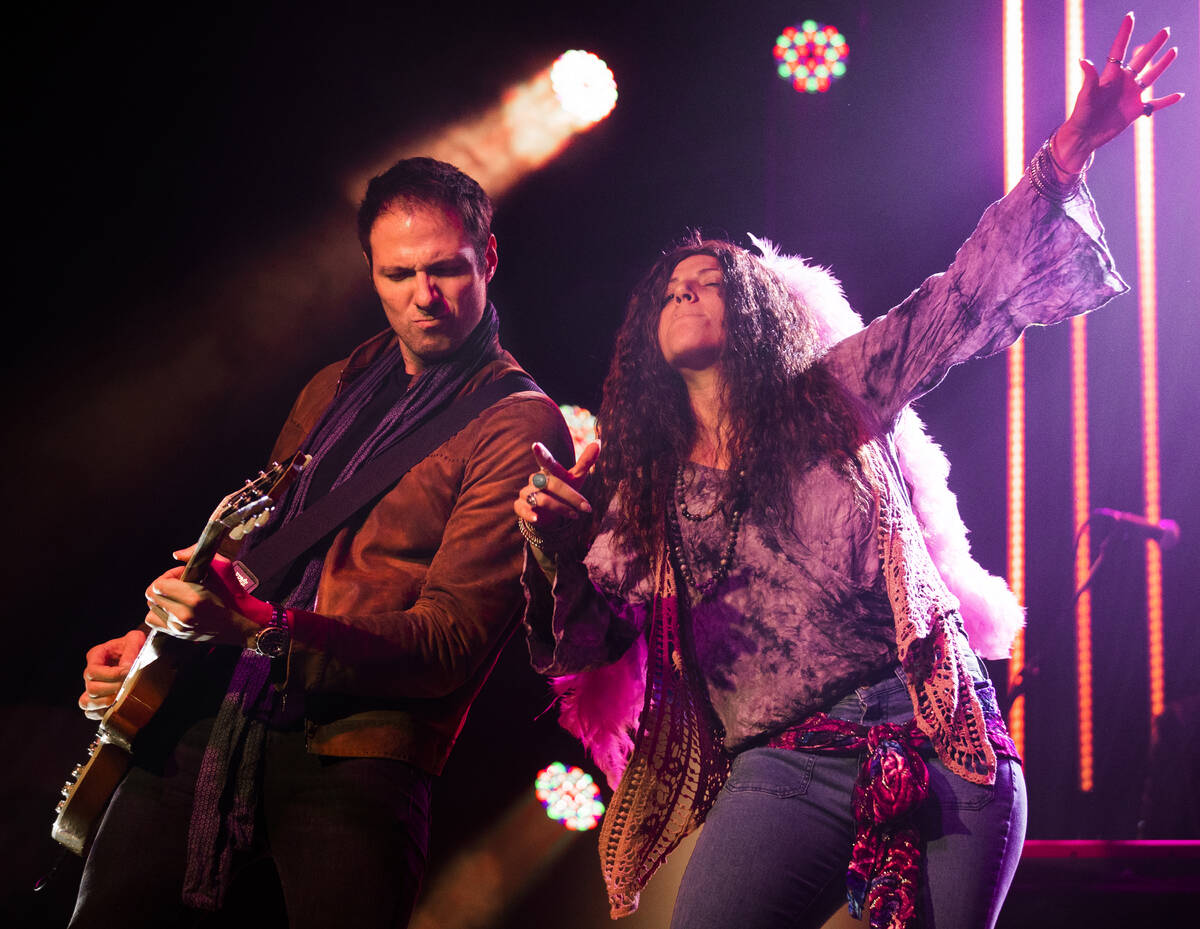 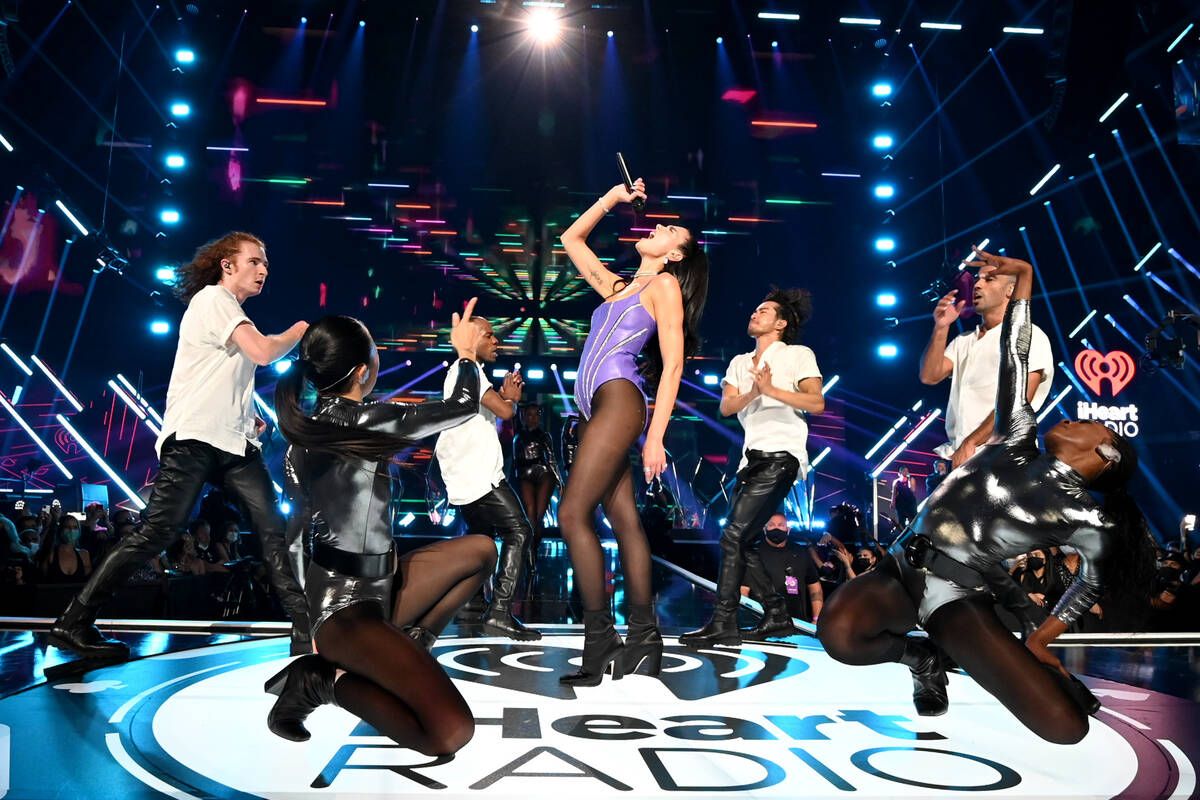 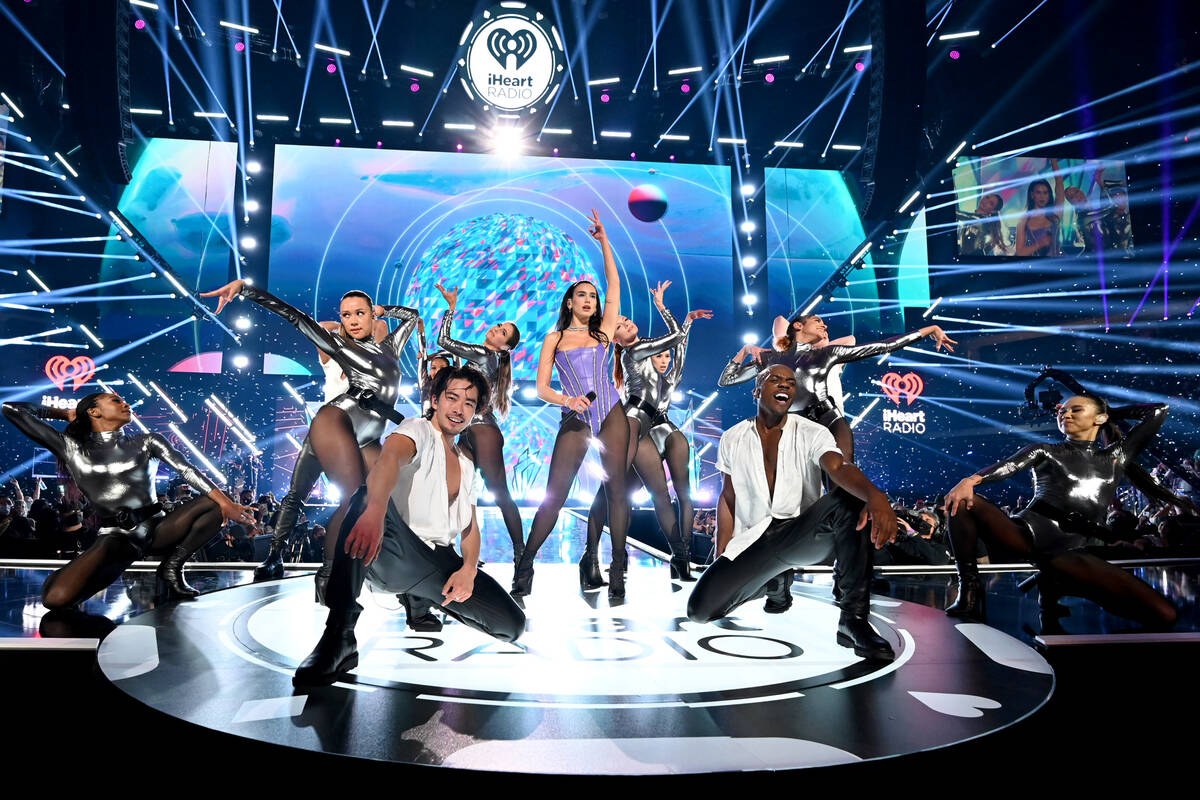 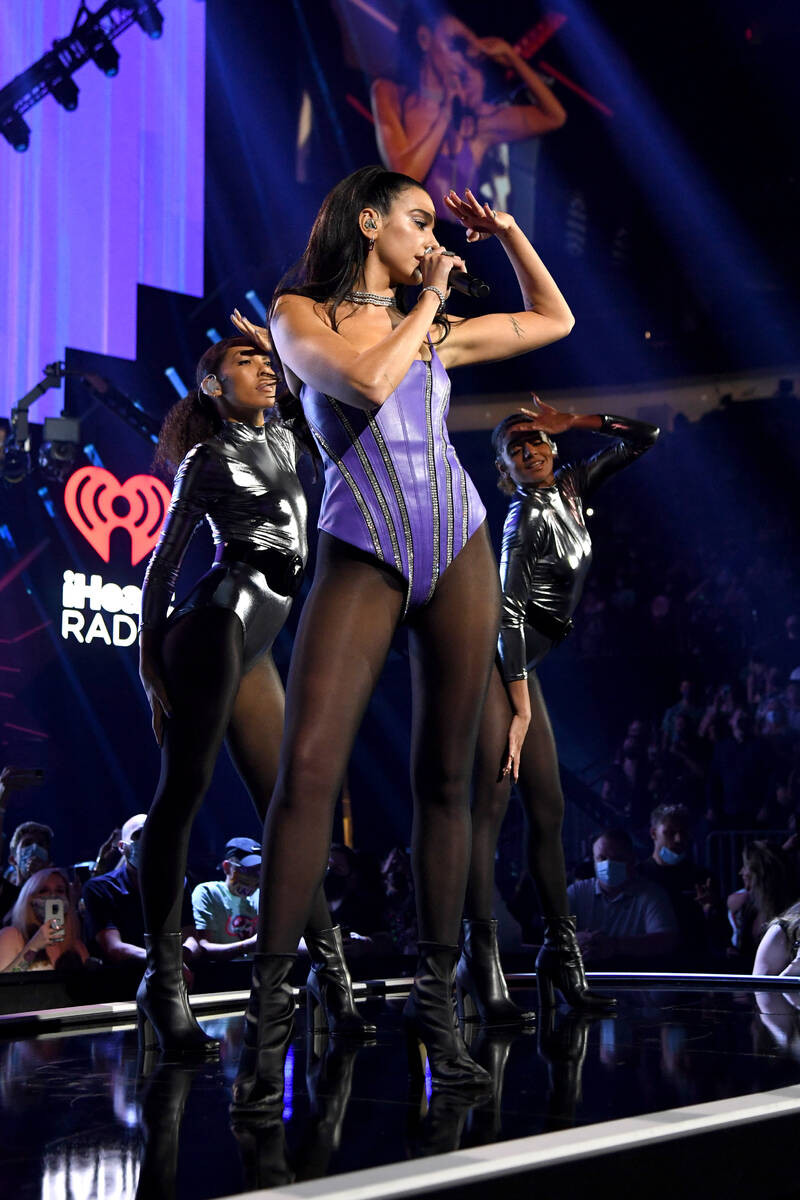 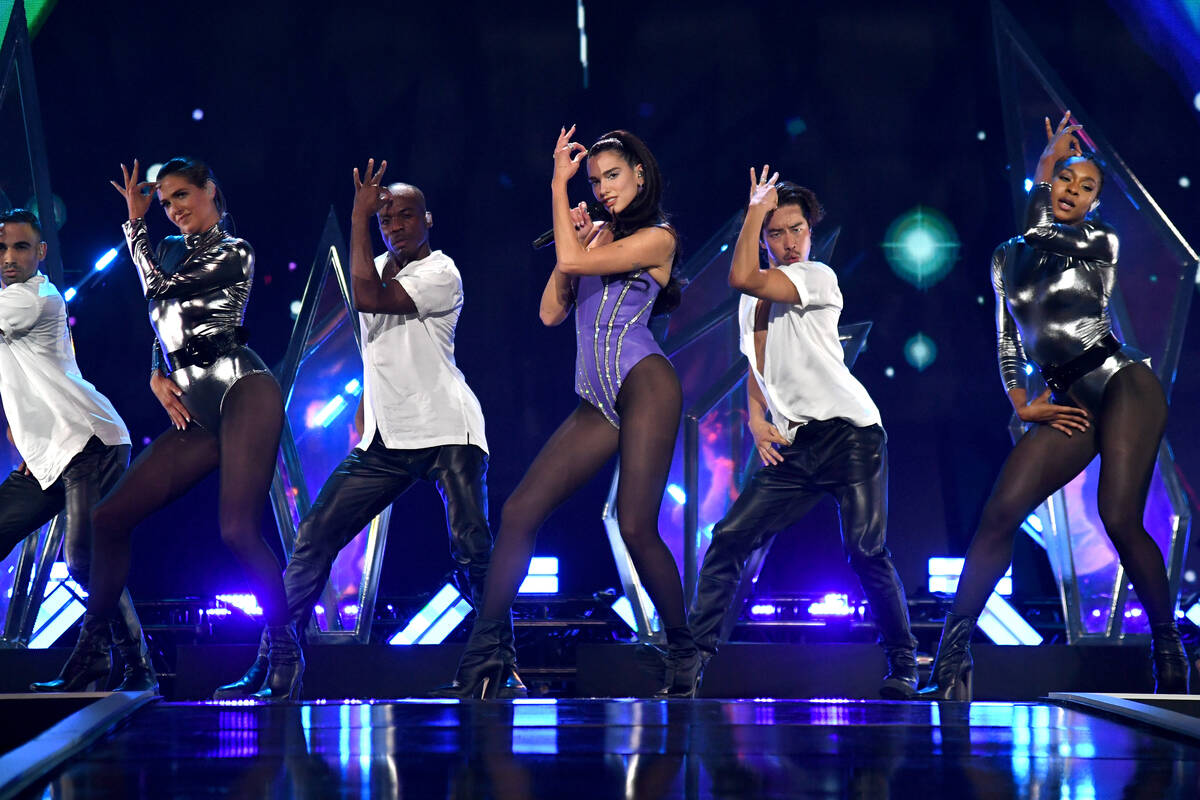 Maybe it was during her “SNL” appearance eight months ago. Or the Vanity Fair cover story from June, where she said of “Future Nostalgia,” her Fink-synth-disco effort, “I loved jumping into what felt like a story I’ve really loved the idea of “Future Nostalgia” having its own world.”

Whatever it is, Dua Lipa has seized what Chrissy Metz, who introduced the pop star, simply called “The ‘it’ factor.”

Lipa tore through her 30-minute set, capped by “Levitating” and “Don’t Start Now.” She was backed by an octet of dancers, moving easily, smiling while calling out the lyrics.

Lipa said she was nervous in her first live appearance since pre-COVID (aside from her two songs on “Saturday Night Live”). But the onetime opener for Bruno Mars was an apt opener for the two-day, three-show festival. I would expect someone out there who books residencies in Vegas took notice.

Iconic rock vets Cheap Trick, frequent headliners in Vegas, played everything you had on a Cheap Trick mixtape from the 1980s. “I Want You to Want Me” and “Dream Police” carried the set. Robin Zander can still throw it down with the best of ’em.

Rick Nielsen is still something of a maniac on the guitar, but left his five-neck Hamer in its case.

Saturday night, Billie Eilish, Coldplay, Journey, Khalid and Lil Baby head the star-studded roster. As she did in 2019, Eilish is also headlining the Life is Beautiful event during iHeart. She performs at 11 p.m. Sunday on the Downtown Stage. Journey is set for a six-show December headlining run at The Theater at Virgin Hotels Las Vegas.

Fans can catch the T-Mobile shows, too, on the CW App and at CWTV.com. The CW Network will also broadcast a two-night highlight package from 8-10 p.m. Oct. 2 and 3. Doors for Daytime Stage at Area15 open at 10 a.m., with streaming available on LiveXLive.com and LiveXLive’s app.

Tickets to all three performances are still available at Axs.com.

Ryan Seacrest is back as host for the T-Mobile shows.

He will celebrate by … sleeping.

“Sleep sounds like the best party I could have right now,” Tavella is quoted by my British colleague James Desborough in The Sun U.S. “I have not done it in a long time. Honestly I am so tired.”

Yes, what happens in Vegas, snores in Vegas.

Tavella can use the rest after his run of performances leading to Wednesday’s championship. Linq Hotel headliner and 2015 season champ Mat Franco returned to perform alongside Tavella in Wednesday’s finale. I saw Tavella perform in the semifinals a couple of weeks ago, and the standing ovation he drew and the uniformed praise he gained from judges Simon Cowell, Heidi Klum, Sophia Vergara and Howie Mandel was impressive. If Vegas can use one more magician, it’s Tavella.

Suffice to say, the musical dedicated to members of the “27” rock club (Robert Johnson, Janis Joplin, Jimi Hendrix, Jim Morrison, Kurt Cobain and Amy Winehouse) is trying to build an audience worthy of its musicianship.

“We want to do three great shows that are full capacity, and put our energy into those shows,” music director and guitarist Erik Himel said Friday afternoon. “But we’re not going anywhere. We’re going to lessen the blow and ride it out.”

Himel added that and co-creator producer Ramy El Batrawi remains firmly committed to the project. The show is offering $27 tickets to locals on the ticketbat.com/event/27-the-show link.

A familiar Vegas performer appeared in the show from Wednesday through Friday, though in an unfamiliar role. Tierney Allen stepped into Lea Cappelli’s role as Amy Winehouse (Cappelli was due back Saturday). Allen has played Lady Gaga in “Legends in Concert” and is a cancer survivor through COVID.

McMullan’s Irish Pub is hosting its St. Baldrick’s shave-a-thon from noon to 8 p.m. Saturday. This is the rare September event, usually held in March but reset for the pandemic. Most events citywide have opted to return to the campaign in March, and that includes the New York-New York shave-a-thon at Nine Fine Irishmen, where I’ve been shaved annually since 2012.

Owned by Lynn and Brian McMullan, the club just west of The Orleans on Tropicana Avenue has been the center of the Baldrick’s drive since 2007. The event honors the couple’s late daughter, Kyra, who died of a brain tumor at age 2½. Several supporters wear red shoes each year in Kyra’s honor.