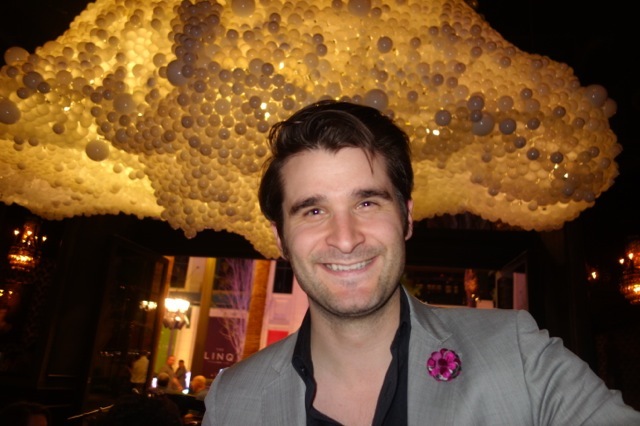 Jon Gray, vice president and general manager of The Linq, confirms former President Bill Clinton has been approached about being one of the first celebrities to ride the High Roller. (Norm Clarke/Las Vegas Review-Journal) 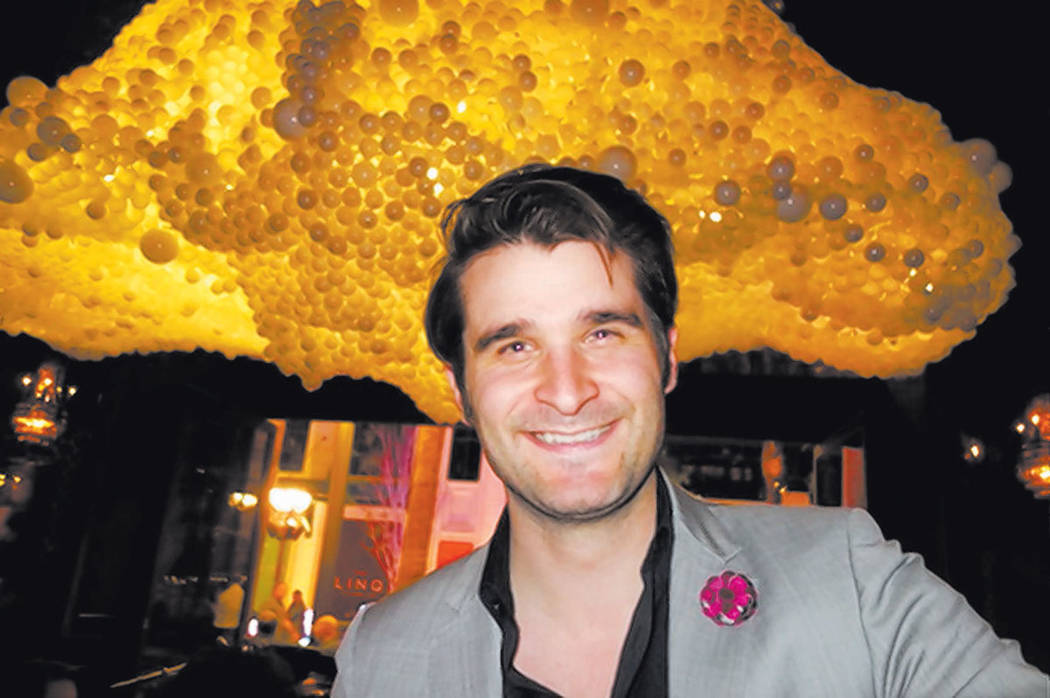 Jon Gray, vice president and general manager of The Linq, confirms former President Bill Clinton has been approached about being one of the first celebrities to ride the High Roller. (Las Vegas Review-Journal) 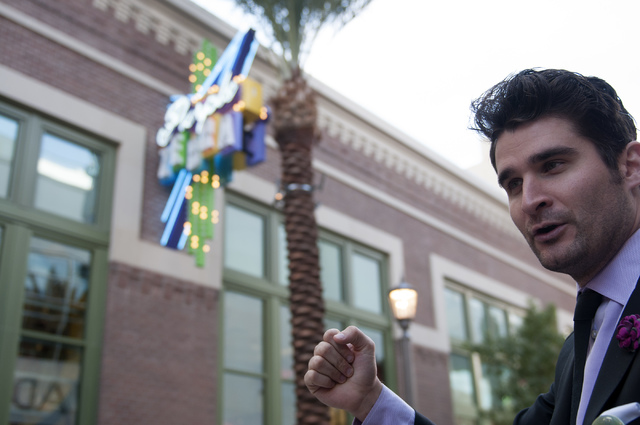 Jon Gray, vice president at The Linq, gives a tour of the new shops opening at The Linq in Las Vegas during a soft opening event Friday, Dec. 27, 2013. (Erik Verduzco/Las Vegas Review-Journal) 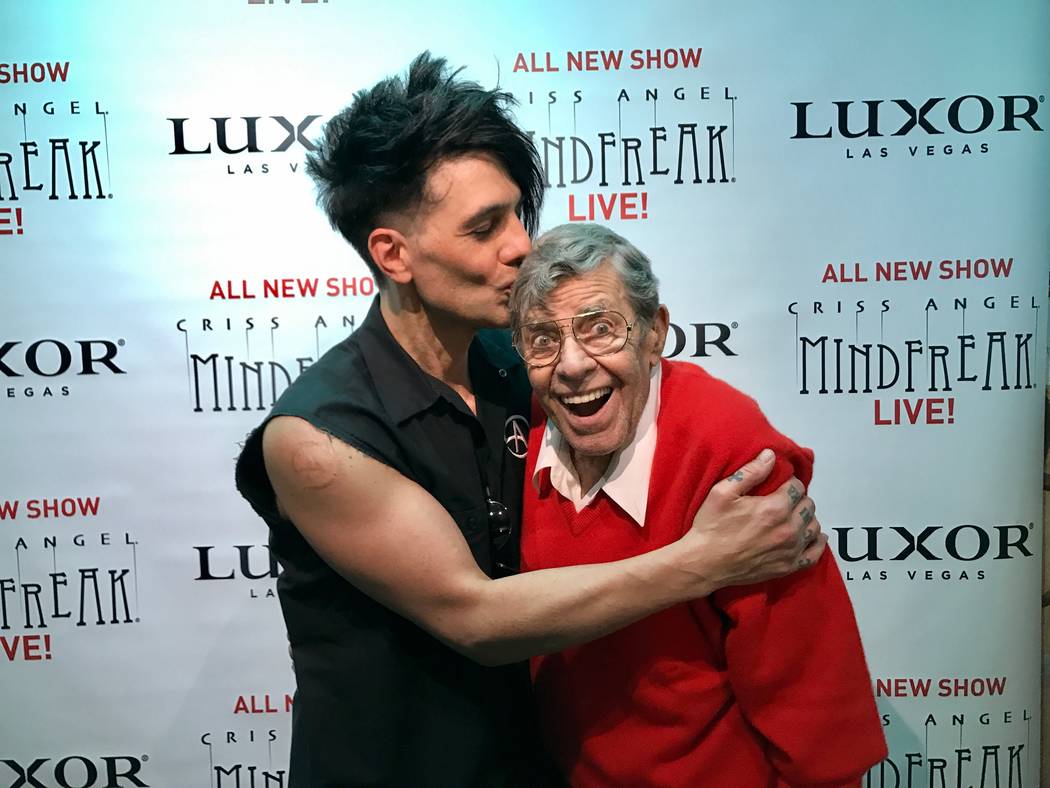 Luxor headliner Criss Angel plants one on Jerry Lewis after a performance of "Mindfreak Live" on Saturday, March 25 2017. (Courtesy) 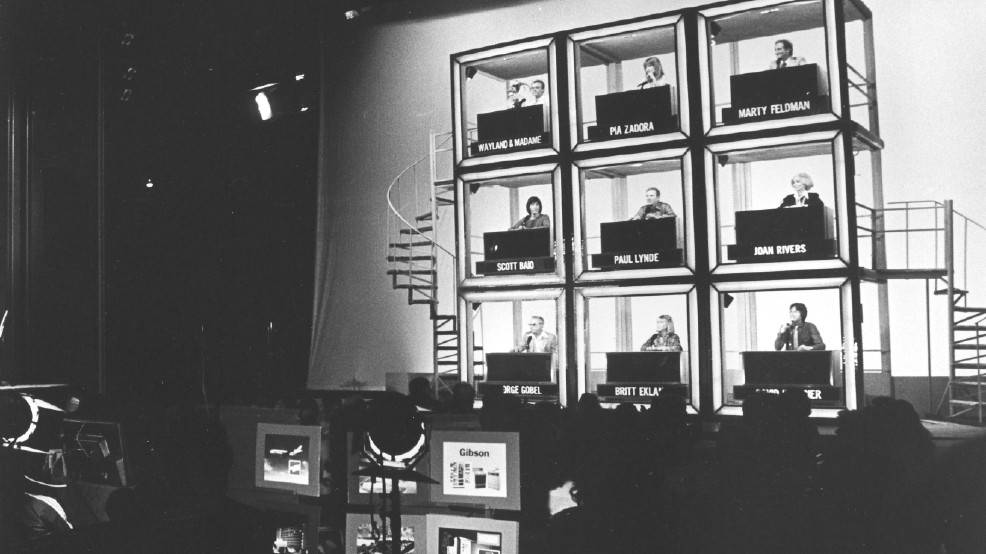 The classic set of "Hollywood Squares" during the show's run at the Riviera in the 1970s. (Courtesy)

Running into the person who runs the Vegas hotel-casino where you’re staying certainly adds to the customer experience.

A decade ago, it was common for guests to encounter Jon Gray, then-senior vice president and general manager of the hotel’s restaurants, nightclubs,and pool events coming or going from one location or another. He regularly ushered celebs such as Jay-Z, Gwen Stefani, Kanye West, Maroon 5 and Britney Spears into VIP enclaves at Pearl Concert Theater. Always setting himself apart, during the opening Ghostbar Day Club in 2011, Gray donned a replica of the sky-blue tux worn by Jeff Daniels in the original “Dumb & Dumber. The ever-adventurous exec is back now, at age 33 but with a world of experience, as assistant general manager of the very hotel where he honed his management skills. Gray is working under new Palms General Manager Anthony Faranca, who most recently operated Parx Casino in Bensalem, Pennsylvania; and alongside assistant GM Cookie Dreschler, who has forged a 30-year career in Station Casinos, including stints as GM of Sunset Station and Fiesta Henderson.

Gray was a key figure and walking manifestation of the Palms’ hip-cool image during its mid-2000 heyday. The upstart exec from Tonopah, a UNLV grad who opened Wynn Las Vegas as a front-desk clerk, arrived at the Palms in 2005, just four years after the hotel’s opening.

Gray was promoted to assistant hotel manager under then-owner George Maloof, and quickly became a key advisor to Maloof for projects such as the Fantasy Suites. Gray was later named senior vice president and general manager of N9Ne Group, heading up the hotel’s nightclubs, restaurants and pool events.

As Maloof sold the hotel, Gray moved on to open Linq promenade, then made much-ballyhooed move to a top-level post with Nike in Oregon, uprooting his family for life in Lake Oswego.

Gray traveled the world burnishing the Nike brand and admits his was “a very cool job.” But Gray still held an affinity for Las Vegas, which he considers his hometown. In mid-February, a little more than four months after Station Casinos began operating Palms, Gray took a call from Station exec Rich Haskins.

“What are you doing? Get on a plane and fly to Vegas,” was Haskins’ message. Gray made the trip and met with Station Casinos owners Lorenzo and Frank Fertitta III. The men bonded over their mutual fondness for the city (the Fertittas were born and raised here) and the history of the Palms, a hotel ripe for new initiatives.

What has not been established, or ruled out, is a name change. Palms was a Maloof creation, and is in fact a 15-year-old brand. But hotel spokeswoman Lori Nelson says only, “We have enjoyed building off the Palms brand and the emotional connection that everyone we have come into contact with from the early days has for it.”

Regardless, the Palms is unique in the Station family, a rare acquisition for a company that builds before buying. The Palms is also the Station hotel that most closely resembles a Strip resort.

“We have to look at the Palms as a lifestyle property, a Strip property, with a lot of potential in nightlife and hospitality, in its suites and entertainment,” Gray says. “What we want to do is really exciting … and we’ve already got some great things underway.”

The Palms is overhauling its Twenty Four Seven cafe, with a new name, look and menu this spring. Keep an eye on its nightlife, team, as veteran nightlife operators Cy and Jesse Waits, late of XS and Tryst at Wynn Las Vegas are reportedly moving to the Palms to work with Gray on relaunching the hotel’s nightlife lineup (the hotel has not confirmed their arrival, but I’m a believer).

Expect, too, a more adventurous use of Pearl, celebrating its 10th anniversary this year. “Pearl is a pillar to the strategy of the Palms … We need to think about how the Pearl can drive the overall experience,” Gray says. “We want people to be partying pre- and post-show not just coming to the show and leaving. We need to look at how entertainment can bleed into other areas of the property.”

As in his earlier tenure, Gray is very much the face and personality of the Palms. Such a role is not necessarily in his job description. It doesn’t need to be. “It’s all about the experience,” he says. “It’s about developing relationships, and that’s just in my DNA.”

Jerry Lewis saw “Mindfreak Live” on Saturday night, and was introduced to the crowd by star magician Criss Angel. Lewis told him, “Great show, Criss, just great. You’re wonderful.” Angel later said having Lewis in the audience was, “The biggest honor in my career. I’ll never forget it.”

“The Paul Lynde Show” at Windows Showroom at Bally’s opened March 22. The ode to the man who inhabited the center square on “Hollywood Squares” from 1968-‘81 stars comedian Michael Airington. The show is a retelling of Lynde’s entire career, even though he is far better known for “Hollywood Squares” than any stage or TV shows (though he was in “Bye Bye Birdie” on Broadway and in the film, and was a cast member on the popular “Bewitched” sitcom).

A refreshing move: The show does employ a live band, led by ex-“Jersey Boys” music director Keith Thompson. And Lynde story not in the show, as told by frequent “Hollywood Squares” guest Pia Zadora: The game show recorded three shows per day. After the first two, Lynde was so unsteady from a day of cocktails that he needed to be strapped into his chair, for risk of falling over backward off the set. Lynde’s fondness for the drink is well-known. In his Lynde character, Airington sips a “mocktail” throughout the show.