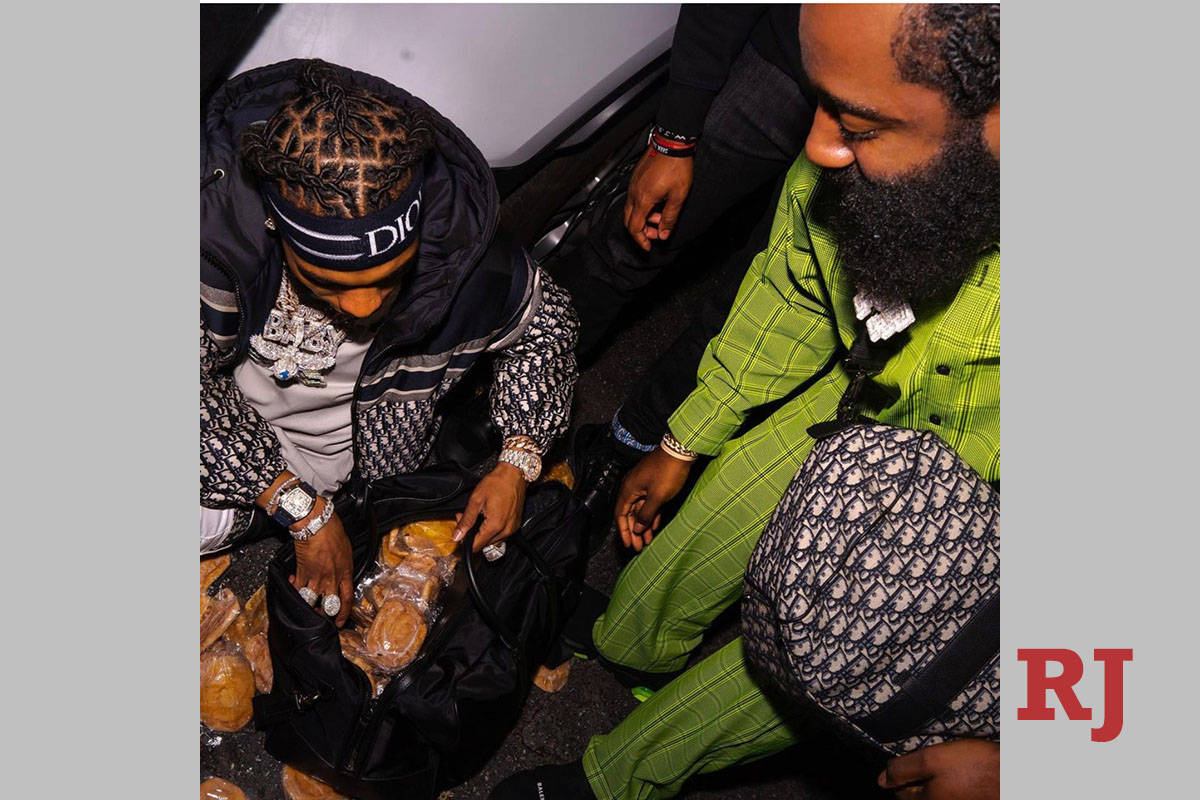 A screen grab of James Harden's lavish gift bag (including $100,000 and a bunch of honey buns) for rap star Lil Baby. (@JHarden13 Instagram)

James Harden is putting on the most prominent, bearded Vegas production since ZZ Top headlined the Strip.

The wayward Houston Rockets superstar was reportedly at Drai’s Lounge at Drai’s After Dark at the Cromwell, and also Blume Kitchen & Cocktails in Henderson over the weekend. This visit, as the Rockets had expected Harden to be in Houston for an individual workout Sunday night.

Reportedly, Harden told the Rockets he would report “soon,” but was instead in Vegas with the team wondering when he’d show up. A person identified as Harden was shown at both venues in Instagram Story clips that posted Sunday.

Harden was purportedly with rap star Lil Baby at Blume, too. The partiers in both instances were mostly maskless.

Drai’s founder Victor Drai refused comment on Harden’s weekend, other than to text he has generally been a “great customer.” Reps for Blume have not returned questions asking to confirm the party with Lil Baby. Much of the frivolity is has been tracked by NBA writer Alec Sturm of @NetsRepublic, and his @Alec_Sturm Twitter account.

The Harden-Lil Baby pairing was an extension of a party that started last week. On Thursday during a birthday party in Atlanta, Harden gave the recording artist a Prada bag stuffed with $100,000 in cash, a luxury Richard Mille watch and actual honey buns (which is slang for $100,000, evidently).

The entire gift package, called by some fans as the “ultimate assist,” was worth $600,000.

The 31-year-old NBA MVP has been in a contract dispute with the Rockets and has reportedly asked to be traded to the Brooklyn Nets. Originally, COVID-19 protocols were held up to explain his absence from the Rockets’ first workout of training camp. But that was before reports surfaced of his Vegas sojourn.

Harden reportedly missed both a team team practice and an individual workout on Sunday, though the Rockets expect him soon.

As usual, more video below.

As ESPN NBA writer Tim MacMahon posted, Rockets first-year head coach Stephen Silas was asked about Harden’s commitment to the Rockets and said, “That’s a question you’re going to have to ask him when he gets here.”

Harden is known to enjoy late nights at Drai’s. He managed to make to Drai’s Nightclub, on Cromwell’s roof, for a New Year’s Eve celebration with comic actor Kevin Hart. Earlier in the night against the Memphis Grizzlies, Harden scored 43 points with 13 assists and 10 rebounds. It was a triple-double before ordering a double-shot, as it were. The great ones make it look easy.

"He is doing the best for his career…He [is] ask[ing] for a chance to get a ring [and] that's it." pic.twitter.com/CrMvAZ9mE6

‘Housewives’ star in the house

While remaining mum on NBA stars who might have been in the restaurant this weekend, Blume officials report — officially — that “Real Housewives of Orange County” co-star Alexis Bellino was in the nightspot Friday. Bellino and her boyfriend, Drew Bohn, and Bravo reality star Heather Marianna were all present Friday night. I’m told to try the Blume Baller Burger.

Jen Romas’ “Sexxy After Dark” revue returns to Larry Flynt’s Hustler Club this weekend. The show premiered Friday and Saturday and played well in the refurbished gentlemen’s club. It turns out the staging platforms are ideal for striptease numbers. Who knew?

Romas will continue her professional partnership with Westgate, where “Sexxy” has performed at Westgate Cabaret for five years. Until it can reopen, the Hustler club is a fitting option for an offshoot show, featuring a dinner option and post-show hang on the rooftop venue. You even get some unbilled thespian action from Doug “Lefty” Leferovich, as the nonplussed audience participant. “Sexxy,” indeed.

Harden reportedly missed both a team team practice and an individual workout on Sunday, though the Rockets expect him soon.

As usual, more video below.

The Stirling Club at Turnberry Place is set up for its holiday party from 6 to 9 p.m. Friday. A holiday dinner prepared by Chef Dan Rossi with wine elections from Frank Family Vineyards is set for The Stirling Room. Vocal great Ashley Fuller is the featured performer. Cost is $222 for non-members, $196 for members. Call 702.732.9700 or go to www.thestirlingclub.com for info.

“Journey to the North Pole” is the Industrial event space holiday theme. The drive-thru experience winds through a winter scene with lights, lasers and projections set to holiday classics. The tour is a co-production of Josh Abelson of Industrial event space, Emo Palumbo of Tag Team Productions and Brian Rogerson of Sin City Scenic.

The “Journey” features three experiences. Each driver needs to tune tune the radio to a designated station before entering the light show. The attraction showcases a laser recreation of the aurora borealis, which means you can research the actual aurora borealis before you visit so you can check the accuracy.

Sir Winston Of Westgate, the resort’s canine mascot, has his own Instagram account. Really. Cute stuff from the doggie who has posted, “I’ve got a bunch of favorite sniffing spots!”