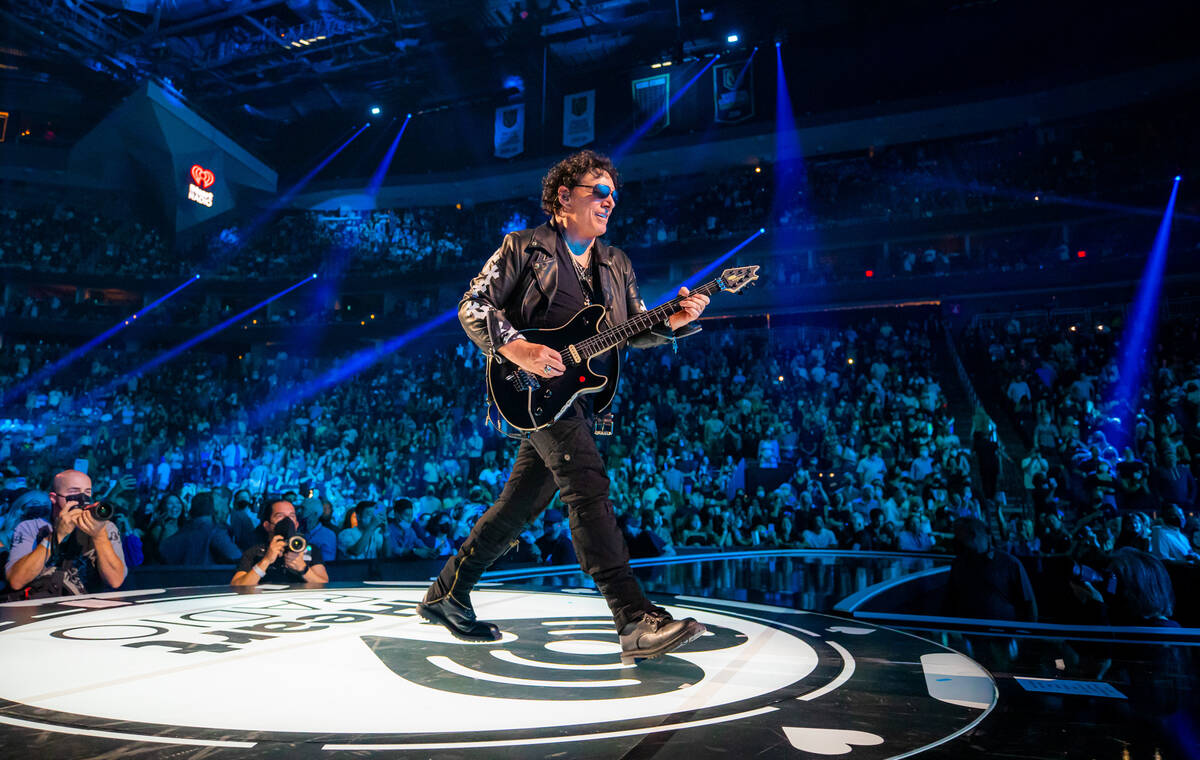 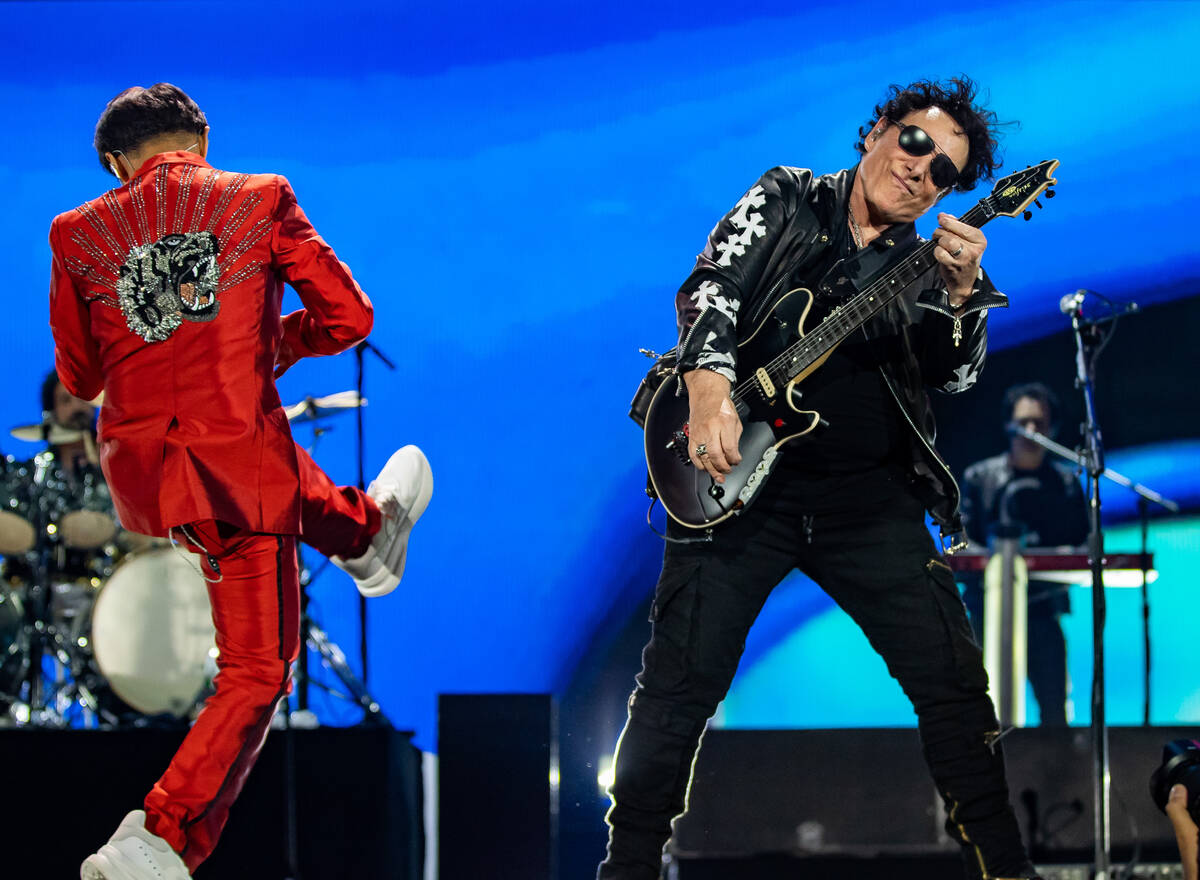 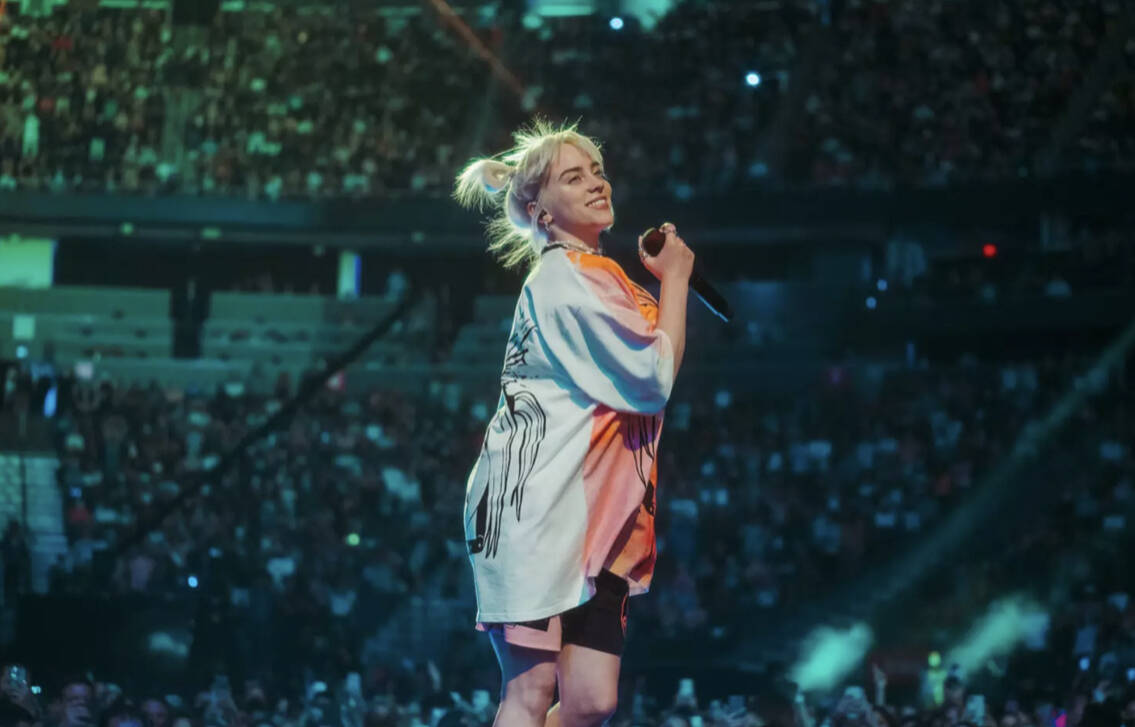 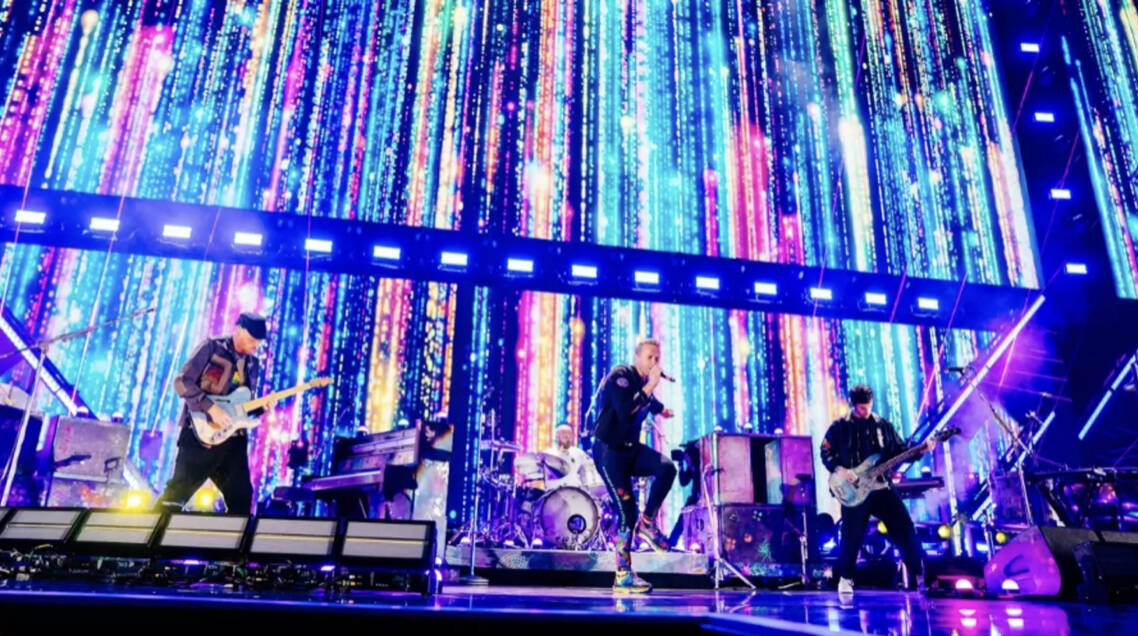 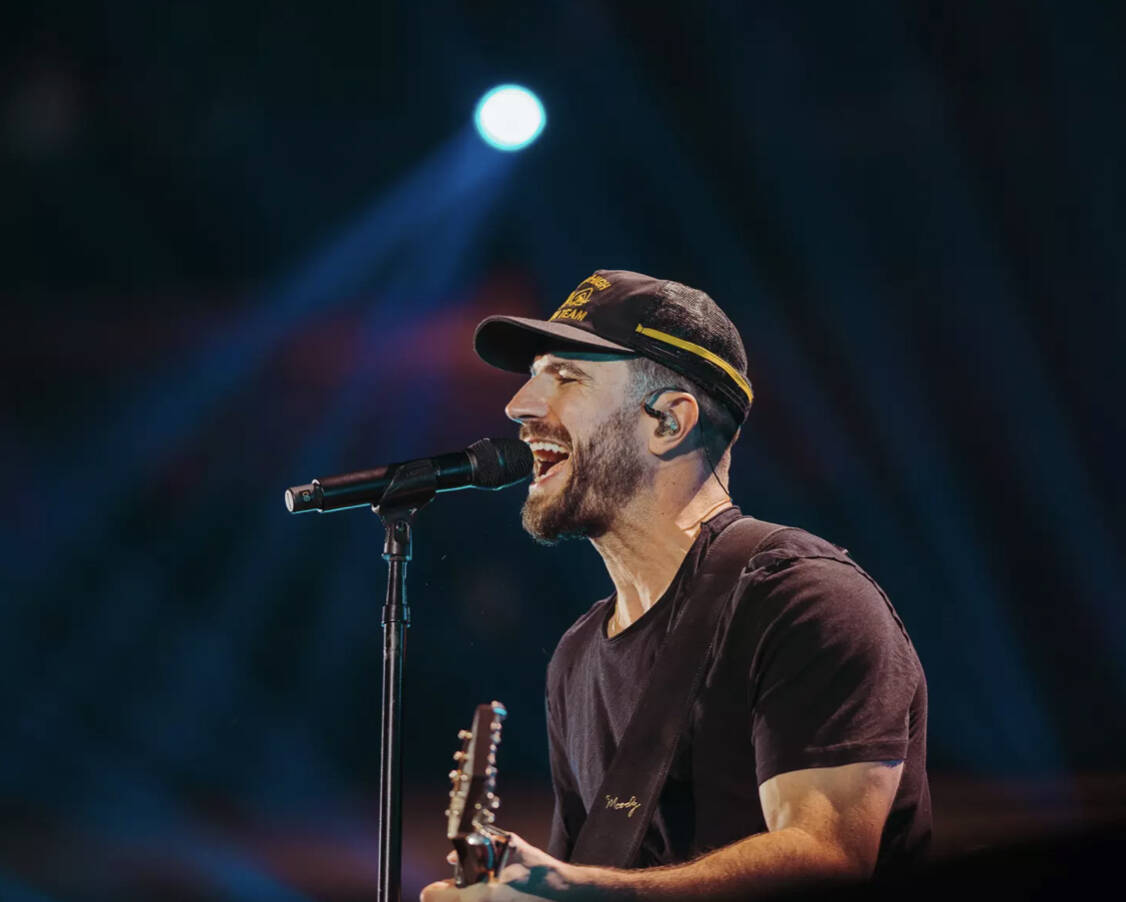 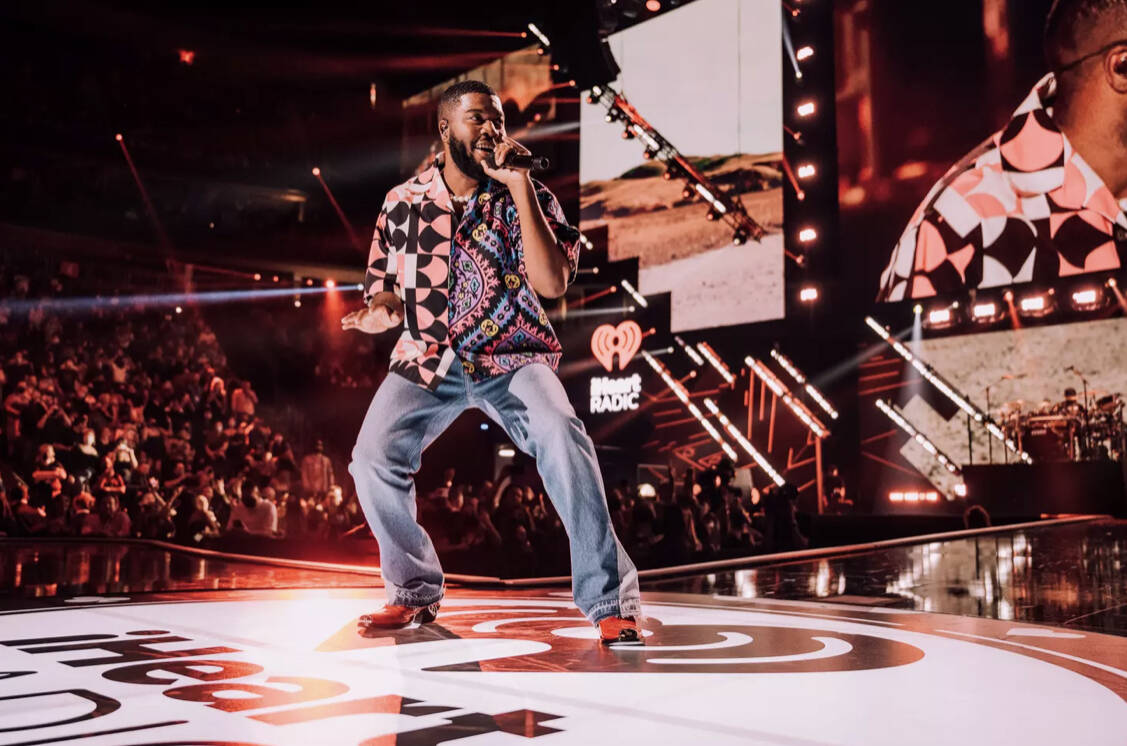 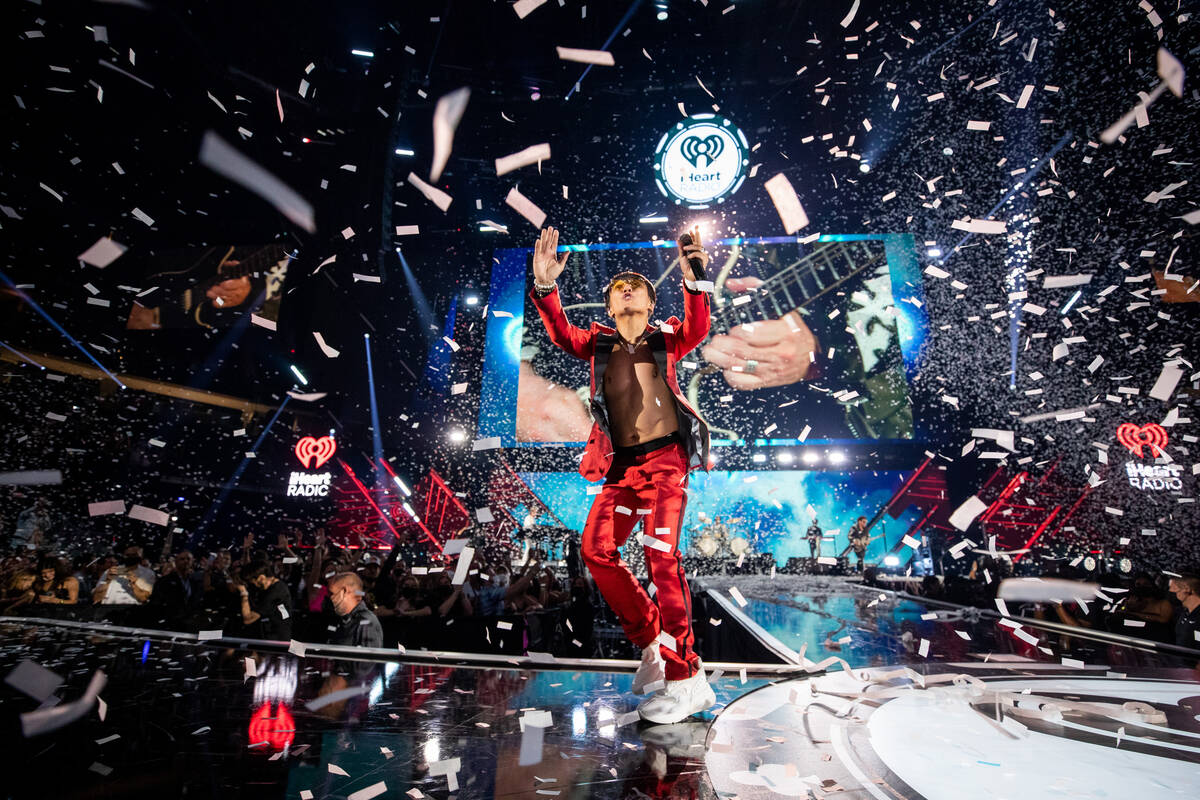 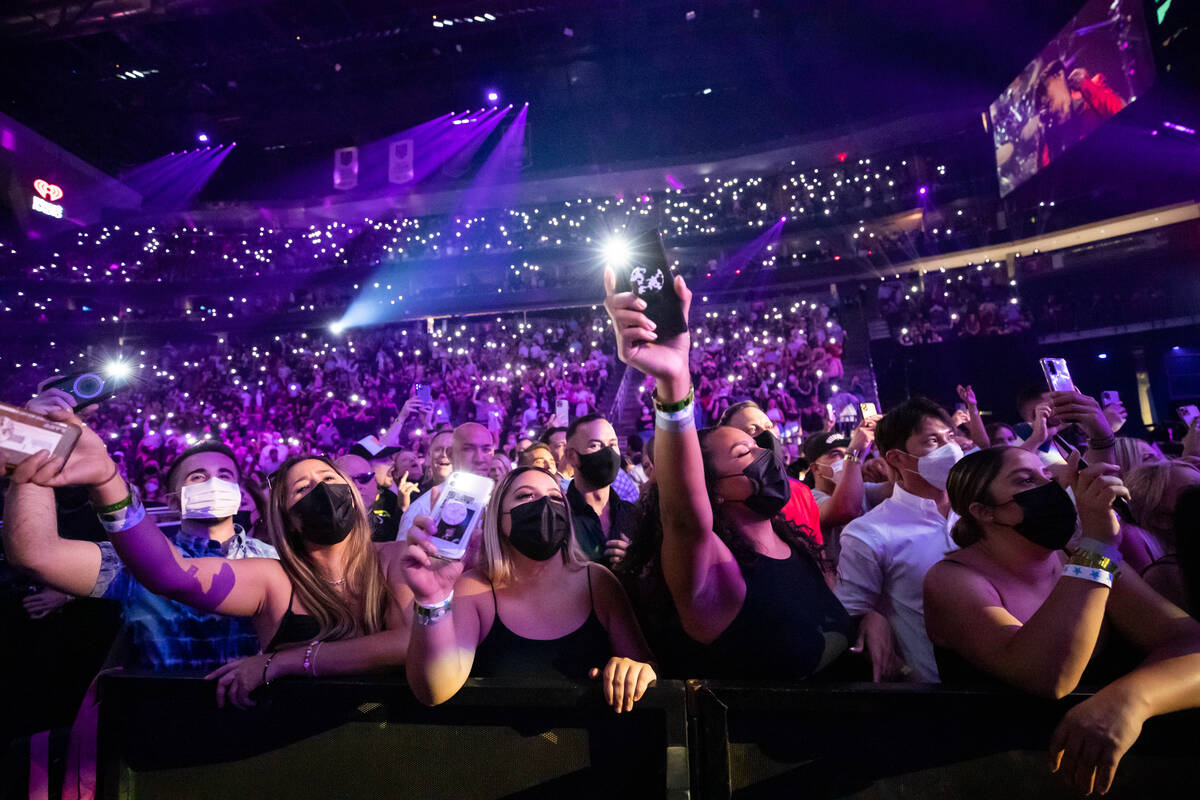 The crowd at T-Mobile Arena is shown during the Journey performance at iHeartRadio Music Festival on Saturday, Sept. 18, 2021. (Erik Kabik/erikkabik.com) 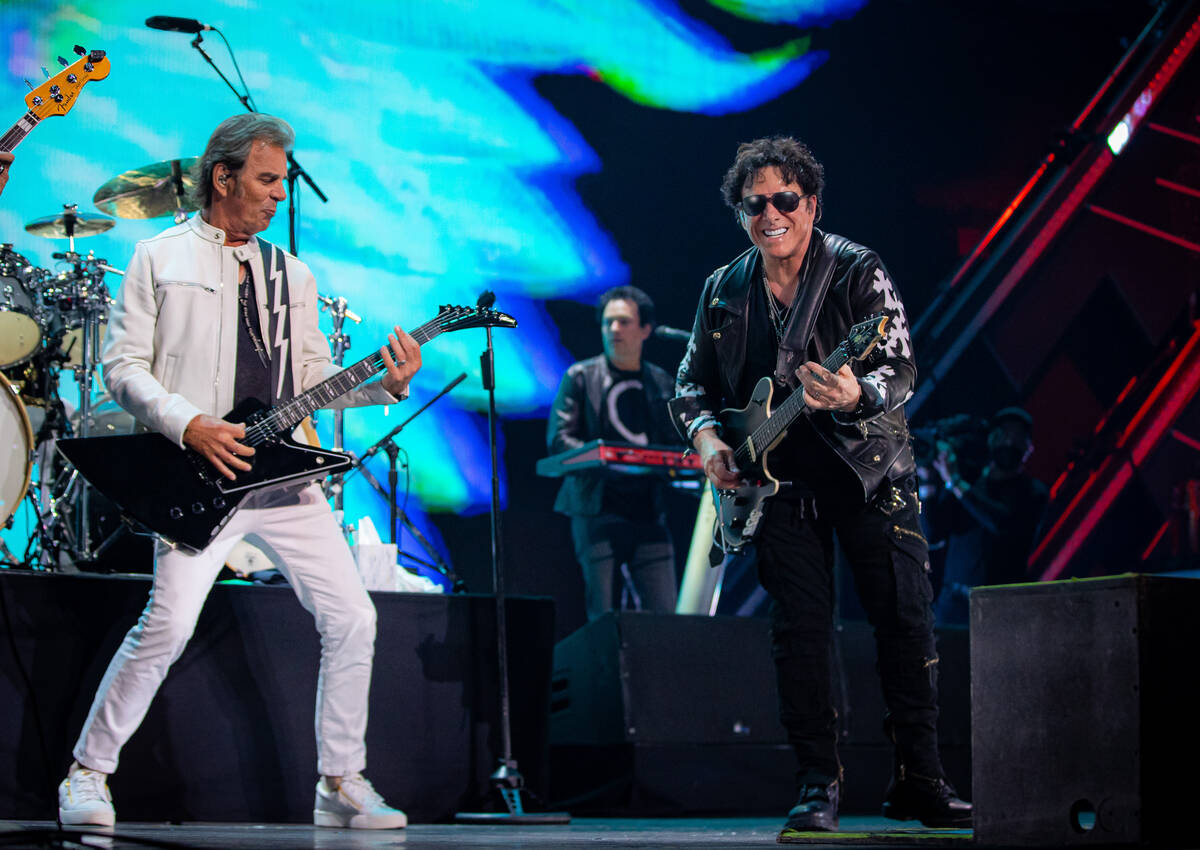 In its decadelong run in Las Vegas, iHeartRadio Music Festival has been known to stage unlikely moments and unbilled collaborations. But achieving what is expected, delivering the high expectations, also hits the mark at iHeart.

Journey closed the night with a rousing recitation of the classics, “Separate Ways,” “Any Way You Want It,” “Lights,” “Wheel in the Sky” and the inexhaustible showstopper, “Don’t Stop Believin’.”

Randy Jackson (same Jackson from “American Idol”) has been announced as the band’s returning bassist, though he wasn’t in the iHeart show. Schon said that Jackson continues to rehab from spinal surgery, adds that he hopes Jackson will be ready for the stage in Las Vegas.

Schon was clearly buoyed by his return to Las Vegas, a place the band has frequented since re-forming with Pineda in 2007, and also in years prior.

“Arnel sang everything in its original key,” Schon said. “That is impressive, when you consider our catalogue.”

A day after the show, the 67-year-old said he was revitalized by the show.

“I’m finally getting my chops back,” Schon, a founding member of Journey, said before the show. “I actually just played and played during COVID. I bought a lot of guitars (laughs). I’m feeling very good about my playing right now.”

The set was Journey’s toe in the water for its upcoming six-show series Dec. 1-11 at The Theater at Virgin Hotels Las Vegas, and also a single performance Dec. 18 at the Colosseum at Caesars Palace.

The band has played a series of concerts on the East Coast and in July was the longest-established band to play Lollapalooza in Chicago. Journey also has a new album out, yet to be titled, due (hopefully) by the time the Vegas shows open. The first single, “The Way We Used To Be,” is out. Of the new album, Schon says, “It’s smokin’.”

The album’s title hasn’t been announced. An EP might be in the offing, but not before the end of the year. Schon says the band is prepping for a tour in February. He’s also looking across the horizon to a possible co-headlining tour with Carlos Santana, his original band mate from the Santana days in the Bay Area.

“I would love that, because we both have new albums coming out,” Schon said, referring to Santana’s “Blessings and Miracles,” due for release Oct. 15. “Carlos and I are the same way. We are always pushing the cause and looking forward.”

What else can you say about the dependably forceful rock band? To use a tennis or basketball term, frontman Chris Martin leaves it all on the court. At once contorting and bellowing, Martin was sweaty enough that the confetti stuck to his face by the end of Saturday night’s set.

Last week, Coldplay unveiled their upcoming collab with BTS, “My Universe,” a selection from Coldplay’s upcoming album, “Music of the Spheres.” The song is performed in both English and Korean and is out Thursday.

On the topic of leaping music fans, Eilish was strong from the jump (as it were) with an opening set featuring “Bury a Friend,” “Bad Guy,” “Oxytocin” and “Everything I Wanted.” Her brother, Finneas, was back for a second night at T-Mobile, playing guitar after following his impressive set Friday.

She advised, “Forget everything that’s (lousy) in your life and just have fun and dance and jump around, OK!?”

Prior to introducing “Happier Than Ever,” Eilish plugged her next Vegas performance, Sunday night in downtown Las Vegas. “See you tomorrow night at Life is Beautiful, if you’re going!” Saturday’s show was Eilish’s first arena performance since her “Where We Do Go” tour shut down in March 2020.

Rodrigo in the Daytime

The rapid-rising Olivia Rodrigo made her festival debut at Daytime Stage at The Grounds at Area15. Some of Rodrigo’s fans actually cried during her breakthrough single, “Driver’s License.” The whole scene seemed a breakthrough for the 18-year-old singer/songwriter/actress. From behind the piano, she called out, “I don’t know if you guys know this but this is a really special day for me, because this is my first show.” Expect more, a lot more, from her.

The Kid LAROI, Sam Hunt and Khalid further filled out Saturday’s iHeart performances (LAROI, who has partnered with Justin Bieber on “Stay,” also performed at the Daytime Stage). Hunt performed “Hard to Forget,” “House Party” and “23.” He has the distinction of being the headliner who closed the Route 91 Harvest festival at Las Vegas Village on Sept. 30, 2017, the night before the Oct. 1 mass shooting.

The CW will broadcast a two-night iHeart festival highlight package from 8-10 p.m. Oct. 2-3.

Maroon 5 is set to perform a pair of New Year’s Eve shows at the Chelsea at The Cosmopolitan of Las Vegas on Dec. 30-31. The band led by Adam Levine has previously, and traditionally, played Mandalay Bay Events Center, now Michelob Ultra Arena. Details forthcoming.

Vegas vocalist Christina Amato headlined Delilah at Wynn Las Vegas on Friday night. Dua Lipa happened to be in the nightspot, coming after her boffo performance at the iHeart Festival. Lipa took a few seconds of video Amato’s performance of Lipa’s “Don’t Start Now,” which the superstar had performed earlier at T-Mobile Arena.

Lipa posted the clip on her Instagram story, then flipped the camera around to give the singers a “Whoo-hoo!” Amato re-posted that video with her own recorded message, “OK, you guys, excuse this right now. I’m having an internal freak-out right now … ” Then showed the Lipa clip.

Half of the brother-sister skating tandem in “Absinthe,” Emily England, has been in holed up in London throughout the pandemic. The great circus performer has been unable to return to Las Vegas and reunite with her brother, Billy England, in the popular act dubbed “Skates of Hell.”

In the routine, Emily is dressed as a nun and Billy as a priest. They proceed to strip to skivvies and spin at high velocity.

You might recall the Englands reached the semifinals of season 12 of “America’s Got Talent” in 2017. That was the year incoming “America’s Got Talent Live” at Luxor host and comic Preacher Lawson won the championship (the “AGT Live” show opens on the Strip on Nov. 12).

But as COVID hit, England trekked to England (we say musically) to wait it out. She underwent knee surgery and developed a magic act. As an illusionist, she has appeared in four West End productions and has been featured at the U.K.’s prestigious Magic Circle.

On Friday, sort of out of nowhere, England reported her visa application to return to the U.S. has been approved. She should be back in Las Vegas on Monday. The Englands’ act should be back in “Absinthe” in an unspecified timeline. But already, this is the sister’s best reappearing act yet.

The Review-Journal is owned by the family of Dr. Miriam Adelson, the majority shareholder of Las Vegas Sands Corp, which operates The Venetian.