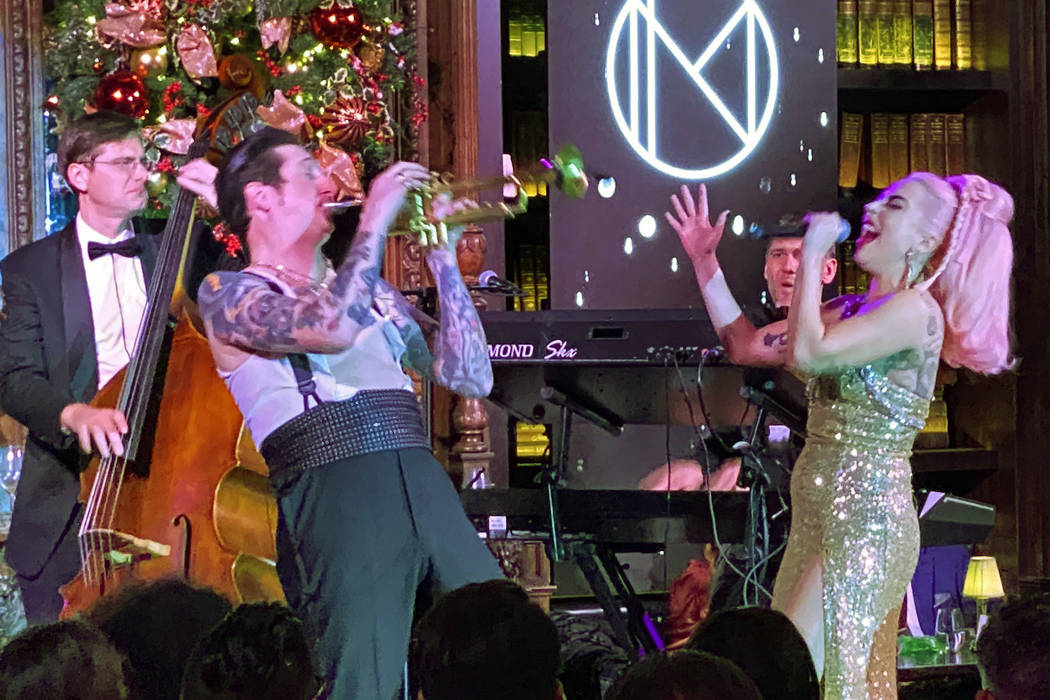 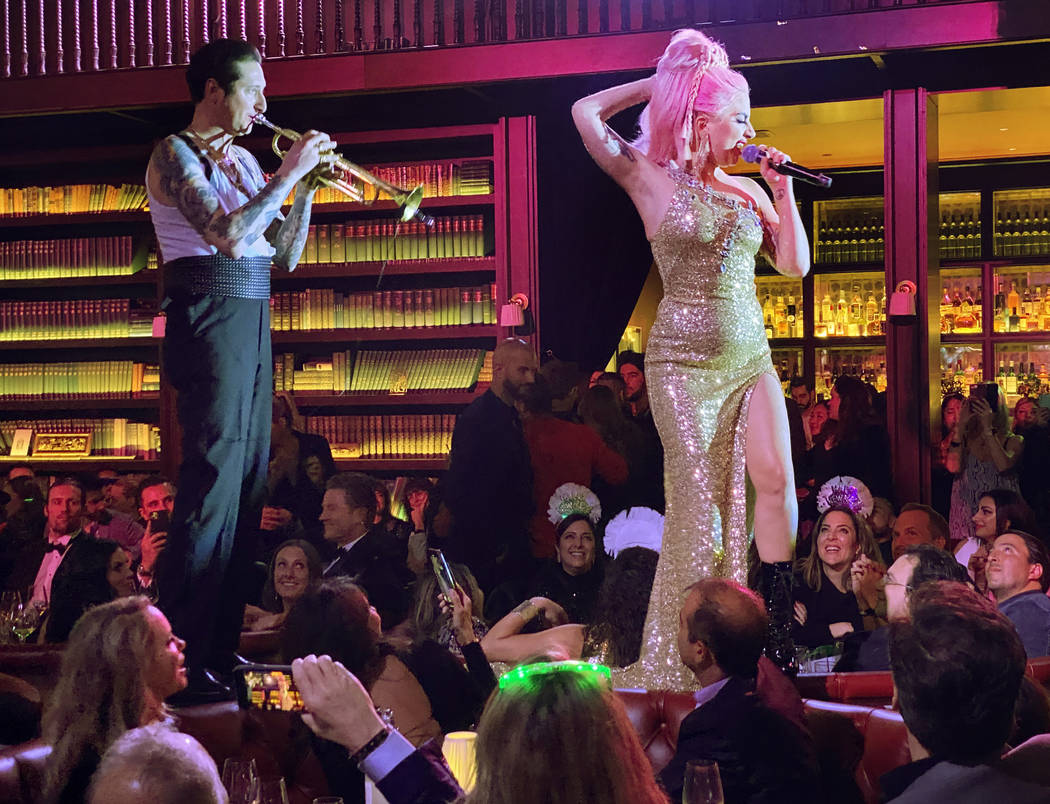 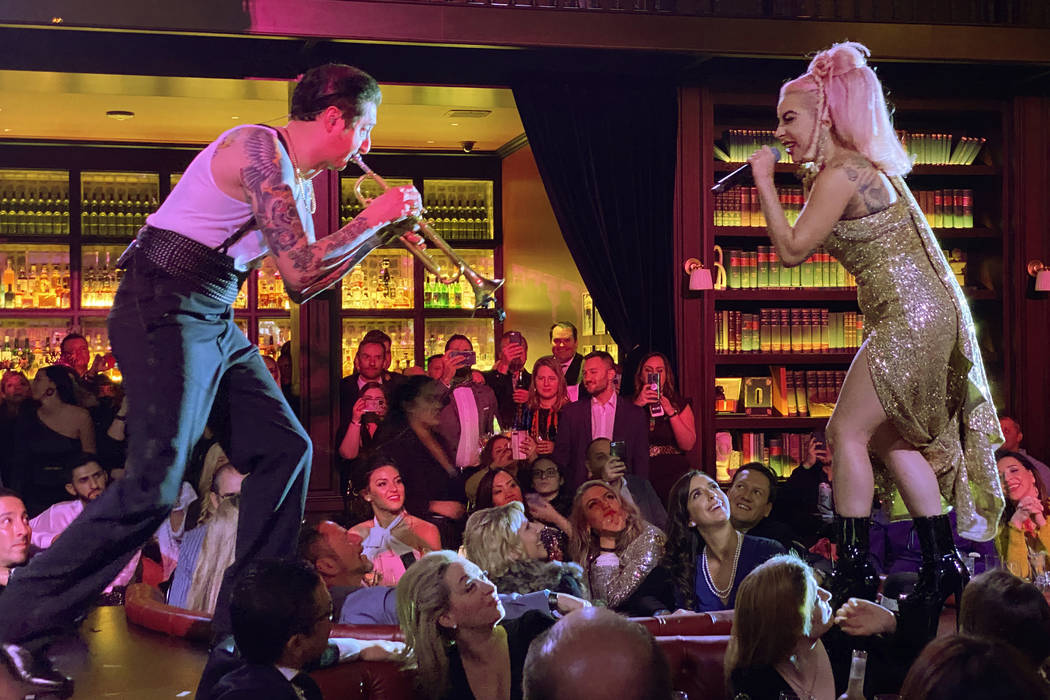 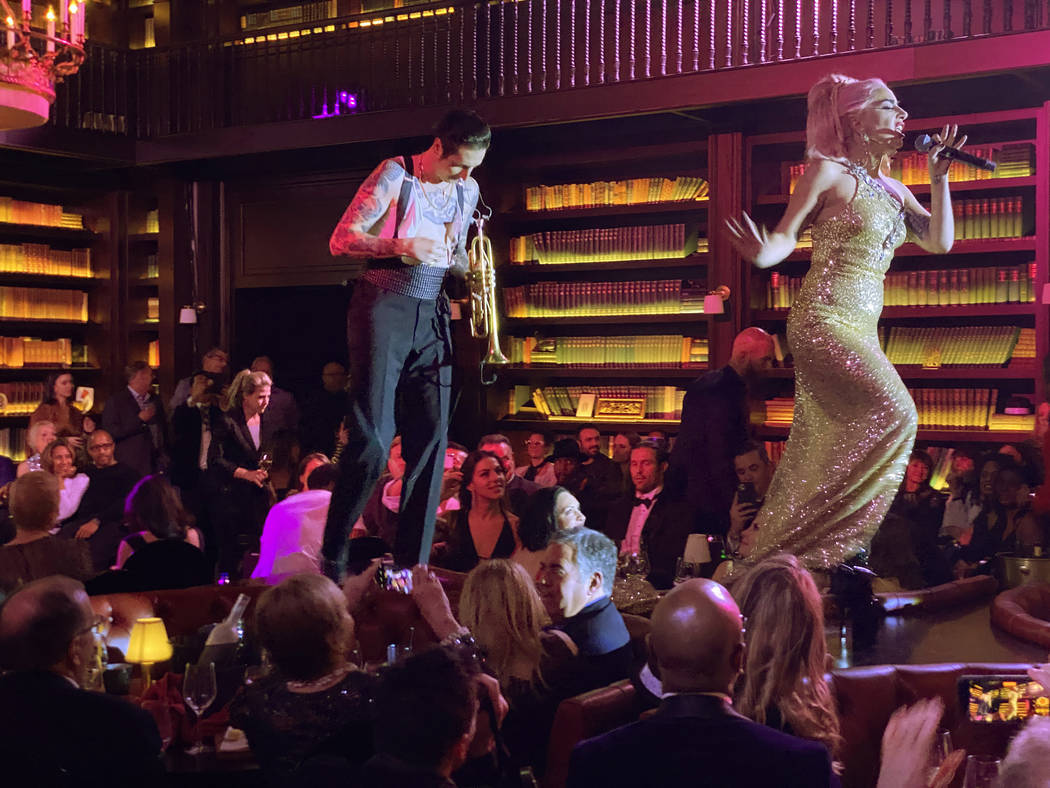 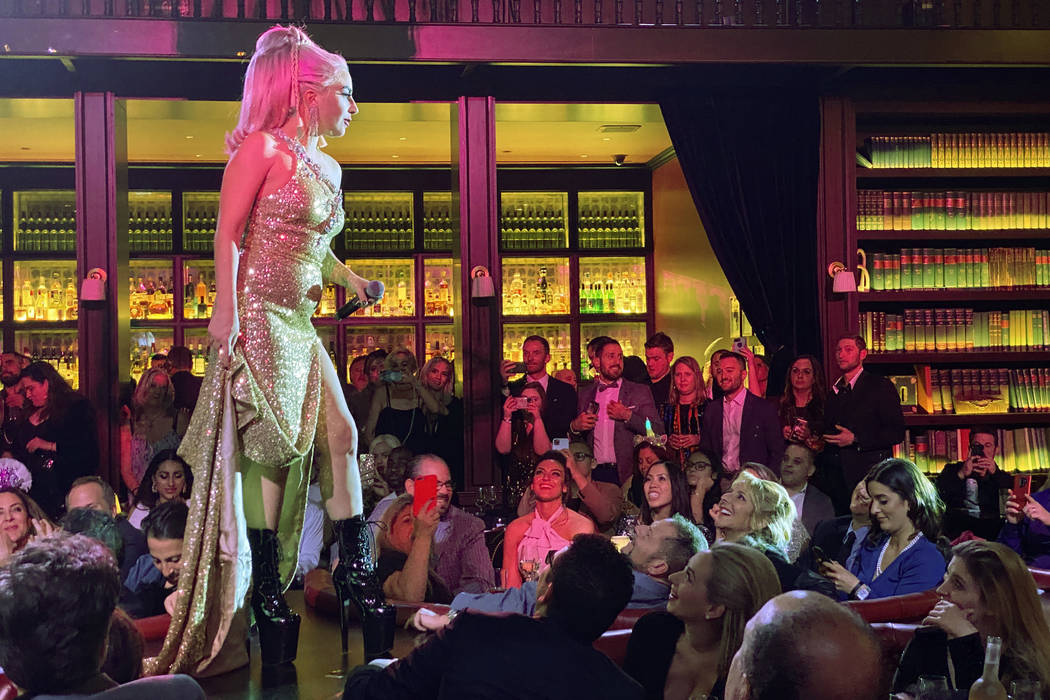 Lady Gaga delivered what has become her Las Vegas greatest-hits package for New Year’s Eve: A soaring performance in “Jazz + Piano” at Park Theater, followed by a spirited (and fueled by spirits) drop-in at Brian Newman’s “After Dark” show at NoMad Restaurant.

Gaga was actually present for two New Year’s Eve countdowns at “After Dark.” A hastily assembled midnight chant that began as the clock hit eight seconds before midnight just after Newman took the stage. The second was at 2:22 a.m., when the show was still careening at full flourish as Gaga had just finished singing “Fly Me To The Moon.”

By then, the pink-wigged pop icon had danced a sultry number with Angie Pontani, who is a burlesque star and also Newman’s wife.

That moment was not entirely a surprise. Gaga and Pontani have steamed up the NoMad room before, during Pontani’s recurring strip-tease numbers. As Gaga says from the stage during “Jazz + Piano,” where Newman plays trumpet and leads the band, “His wife is one of my best friends, I’m godmother to their daughter, and we’ve posed naked together.”

Pontani, a former Miss Exotic World champ, was not quite nude, but stripped to a G-string and pasties while donning a cat mask.

Unexpected in this dizzying NYE tableau was Gaga’s PDA with an unidentified gentleman off to stage left (or, the side of the room next to the bar) at NoMad Restaurant. As Newman’s band kicked in with “Auld Lang Syne,” Gage canoodled in full view of the crowd with a dark-haired, bearded man known only as Michael as the (first) countdown turned the calendar to 2020. This was no innocent peck at midnight. It was akin to necking.

Gaga was seen kissing the mystery man again later in the set, and also walking with him hand-in-hand while heading to a waiting SUV.

At the risk of reading too much into physical behavior, the two acted in a way consistent with an ongoing romance.

And at the risk of stripping the night of its real entertainment value, we’ll halt the speculation here.

As anyone who has followed Newman through this column realizes the trumpet player from Brooklyn (and a native of Cleveland) has intelligently and passionately created a delicious late-night hang that follows all of Gaga’s shows at Park Theater. Even when Newman is not on stage in “Enigma,” he rocks the 155-capacity NoMad Restaurant. We’re hoping, and expecting, “After Dark” will be extended when Gaga returns in May.

Vocalist Jaclyn McSpadden, especially, has seized her guest-starring performances to show she is a star in the making. On New Year’s Eve she uncorked a cover of “Play That Funky Music” that seemed about to shake the David Rockefeller book collection off the shelves. On Monday night, Newman’s guest stars ranged from Hammond organ legend Ronnie Foster to Laugh Factory at the Tropicana magician Murray Sawchuck.

Of course, the shows that follow “Jazz + Piano” have become a torrid ticket because of the chance (or rather, likelihood) that Gaga will show up. Her performances are remarkable for their zeal, and also the star’s stamina, as she wades in for nearly a full set after singing for about 2 1/2 hours at Park Theater.

For New Year’s Eve, she bent over so Newman could play his trumpet in to her rear end. She took to the skinny strip between the booths — what we’re alternately referring to as the Newman Midway or the Newman Strip — for her bump-and-grind with Pontani. She also pulled off Newman’s dress shirt, and tore away his T-shirt, revealing the musician’s lavish display of body ink.

Gaga is apt to remind the crowd, “It’s Lady Gaga in Las Vegas. Don’t bring your kids here.” The line always gets a laugh. But Gaga’s connection to her longtime friends Newman, Pontani and Hill is clearly heartfelt.

“Brian, if you leave me, I’ll (expletive) kill you,” the star headliner said late in her appearance on the Newman Strip. But really, she’s been killing it all the while in her shows on the Strip and was all too ready to count in 2020, twice over.