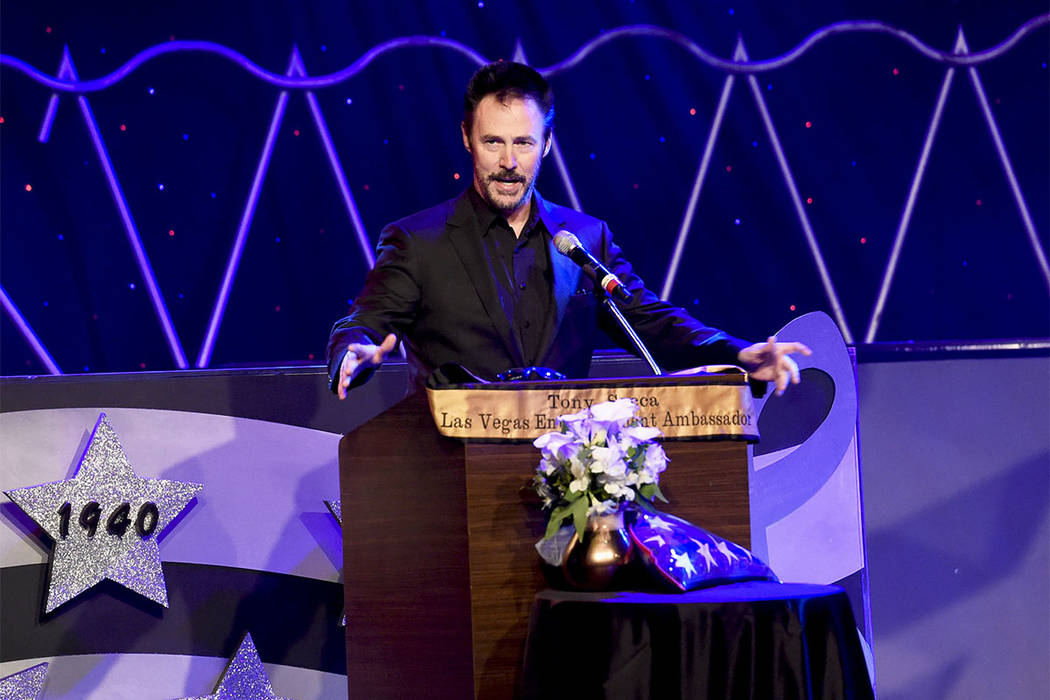 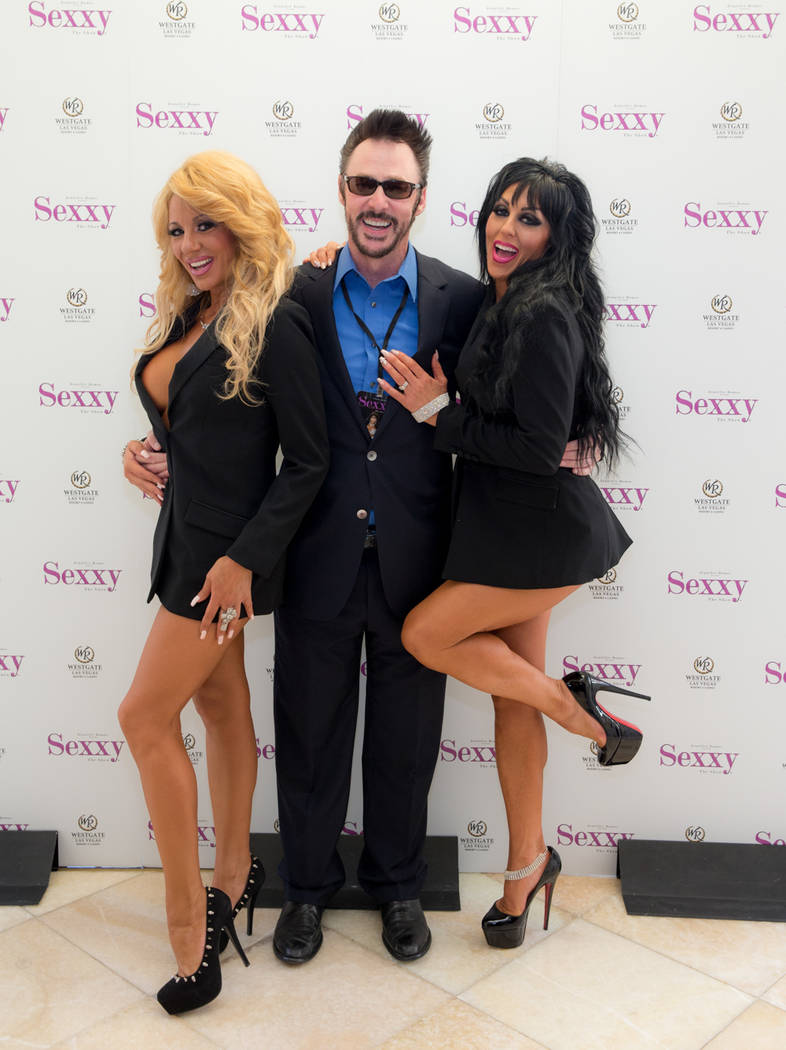 Gabriella Versace, Lance Burton and Jennifer Romas attend the celebration of the 500th performance and second year of "Sexxy" at Westgate on Monday, May 8, 2017, in Las Vegas. (Erik Kabik) 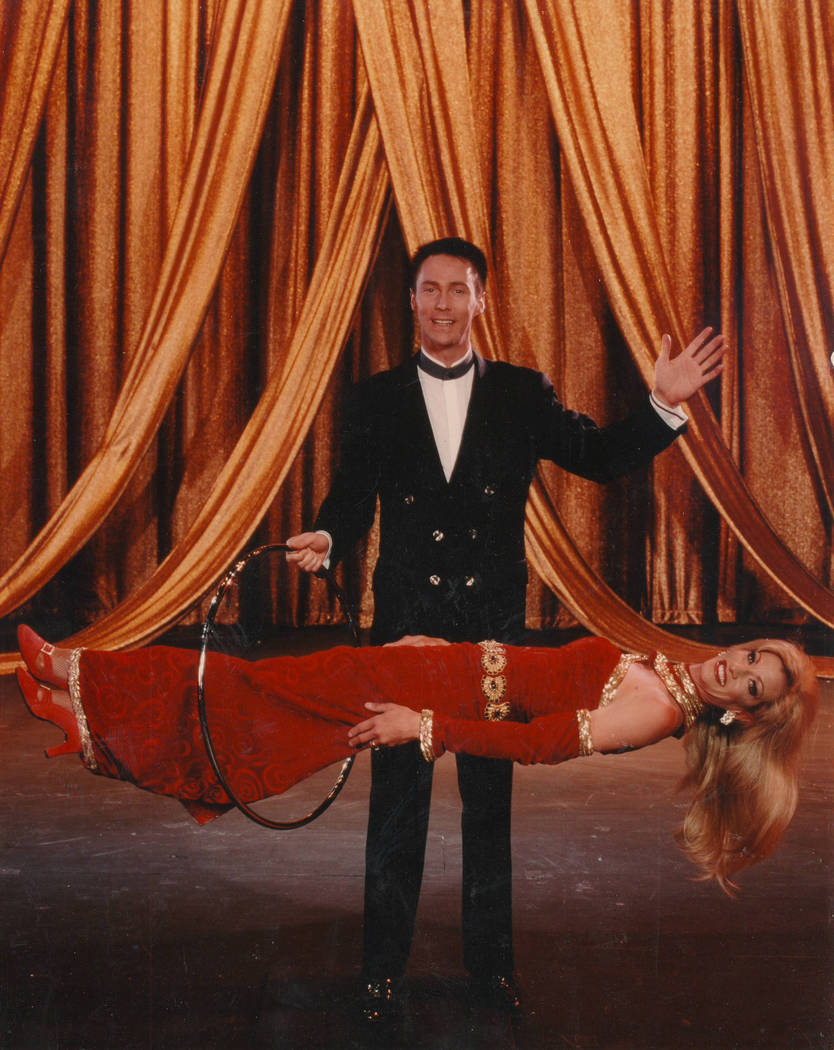 For more than a decade, she also worked as one of magician Lance Burton "babes" at the Monte Carlo. She's shown here in 2008 during Burton's levitation act. (Courtesy of Lance Burton) 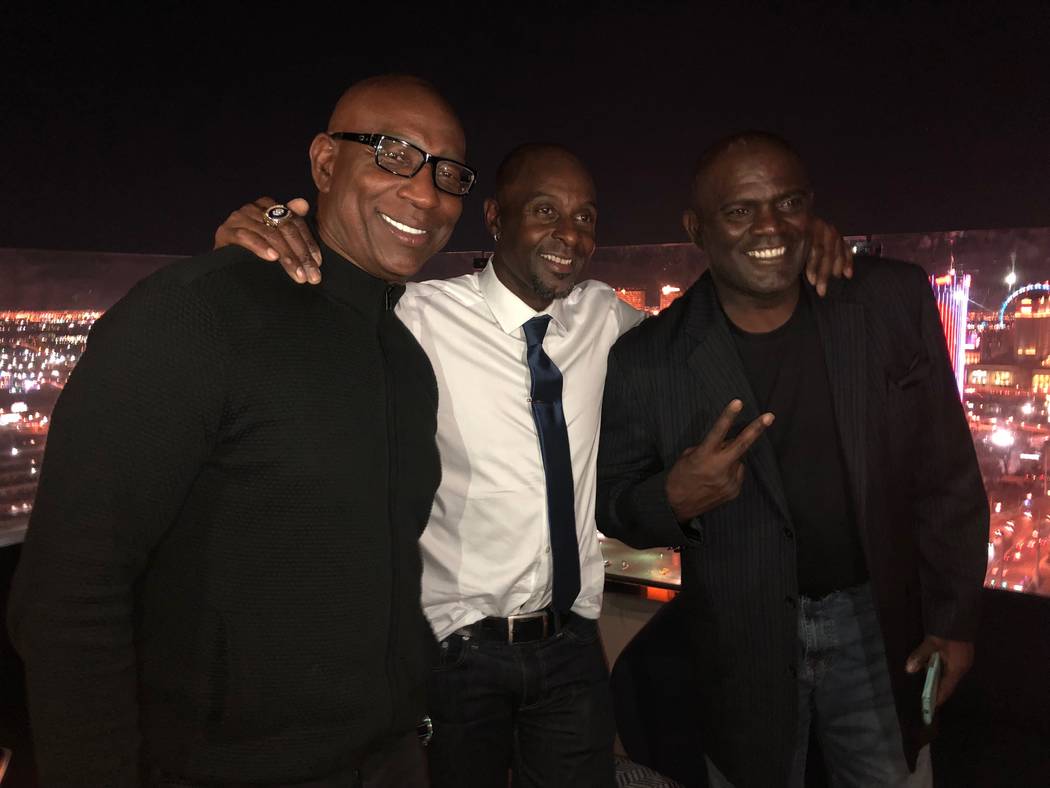 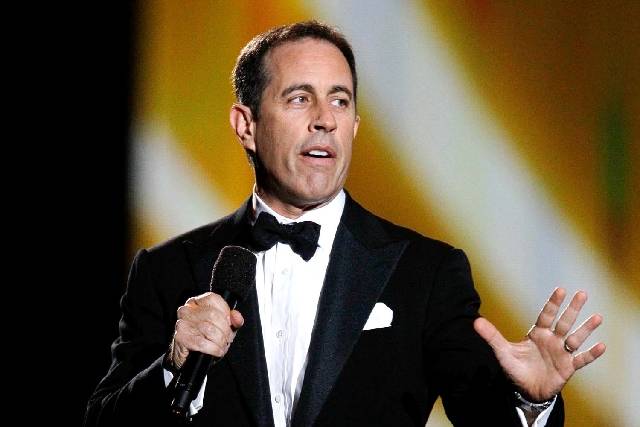 Jerry Seinfeld is expected to perform through 2019 at the Colossuem at Caesars Palace. (Caesars Entertainment)

Lance Burton is returning to the Las Vegas stage with a show he calls “The World’s Shortest Residency.”

The master magician is joking, at least about the the title. But Burton is indeed returning to perform at Orleans Showroom on Nov. 23-24. “Lance Burton & Friends” is the show’s actual name, with Burton appearing with co-stars Fielding West, Michael Goudeau and Keith West. The shows are a fundraiser for Variety — The Children’s Charity of Southern Nevada.

Burton has not performed a full production since ending his 14-year run at Monte Carlo in September 2010. The 58-year-old headliner has appeared in charity shows in Las Vegas over the years. He has also a performed his “Lance Burton & Friends” show around the country.

Burton’s most recent headlining show was at Route 66 Casino Hotel in Albuquerque, New Mexico, on Sept. 1. He says he is performing in Vegas again because officials for Boyd Gaming, which owns The Orleans, asked him.

“They have always been very nice to me; they’ve always invited me to restaurant openings and their events,” Burton said Sunday. “I’ve worked in the showroom before for fundraisers. I know the crew there. So, why not?”

Raised in Louisville, Kentucky (as was his friend and fellow magician Mac King), Burton started working in Vegas in 1981 when he was a side act for “Folies Bergere” at Tropicana. He is popular among Vegas magicians, which he says is because “I’m retired now.”

The Revelry Hall of Fame

Ex-NFL greats Jerry Rice, Lawrence Taylor and Eric Dickerson were all at the Palms on Friday night. Their appearances at the hotel coincided with the Scout Fantasy Sports draft event; all later dined (in separate parties) at Scotch 80 Prime before hitting Apex Social Club.

Taylor and Dickerson earlier golfed at Spanish Trail Country Club. Rice ended his evening at Tao at The Venetian, taking over a VIP booth for DJ Five’s performance.

The touring production “Little Miss Nasty” and a comedy-magic show by Mateo Amieva (Maestro in Criss Angel’s “Mindfreak Live” show at Luxor until it closes Oct. 28) are set to open at Night Owl Showroom at Hooters in October. Venue operator Pete Housley has passed along the room’s latest rundown, which is still anchored by impressionist Gordie Brown at 7 p.m. daily (dark Tuesdays and Fridays).

Amieva, who performed his “Action Man” show at The Space in May, is partnering with comic/magician Christian Ford in a yet-unnamed 9 p.m. show opening Oct. 12. Housley said he plans three additional productions for Hooters, to be announced this month.

From Jerry Seinfeld at the Colosseum at Caesars Palace on Saturday: “There was never a commercial for texting. It just arrived. No, ‘Do you want to communicate with someone but don’t want to hear the sound of their voice? Texting is for you.’ It was the first time I’d seen Seinfeld at the Colosseum. Caesars and AEG Live have just added shows for him Feb. 22-23 and June 21-22 2019. Seinfeld’s show is pure genius. His opener, ex-“Arrested Development” writer Chuck Martin, is also dynamite.

The run for Daylight

Aid for AIDS of Nevada’s 32nd annual Black and White Party played out at Daylight Beach Club at Mandalay Bay on Saturday. Numbers are still being calculated, but my eyes say attendance was down from previous years when the event was held at The Joint at the Hard Rock Hotel and at Aria.

I blame the heat and the limited-capacity outdoor venue. Many of the black-and-white costumes (adorned with balloons and glitter and feathers and such) were not suited to high temperatures. Nor were the people wearing them.

As it was, the event featured performances from Tenors of Rock (celebrating their 500th show at Harrah’s Showroom on Sept. 17), Murray Sawchuck, David Goldrake, Blue Man Group and Jennifer Romas of “Sexxy” at Westgate.

Romas performed her corybantic bathtub number and lost her left pastie in the process. As co-host Amy Saunders, star of “Miss Behave Game Show” at Bally’s called out, “Where’s Janet Jackson? We have a wardrobe malfunction!” She then retrieved the misplaced item and placed it in her mouth. Thus, the event was a success. 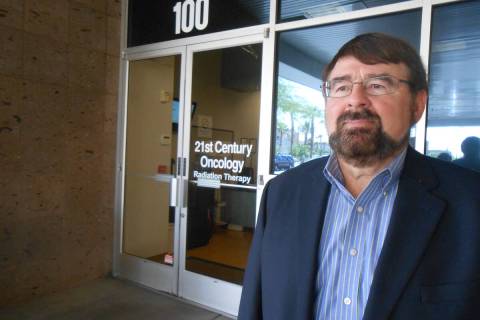