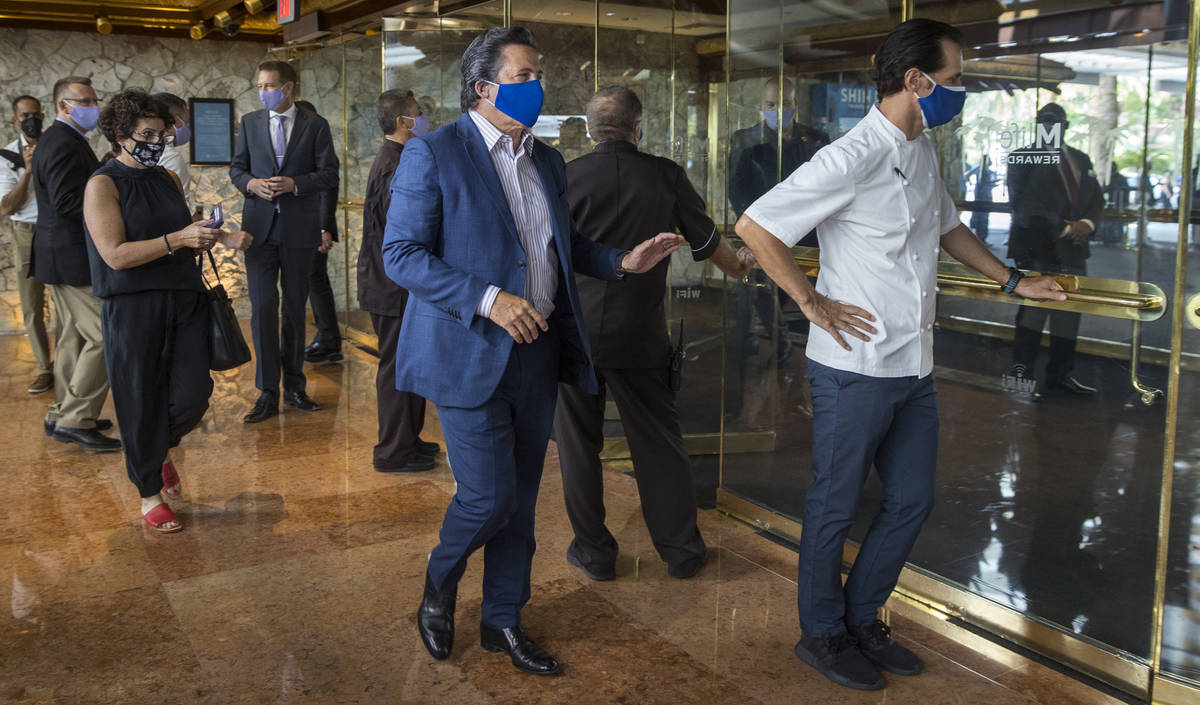 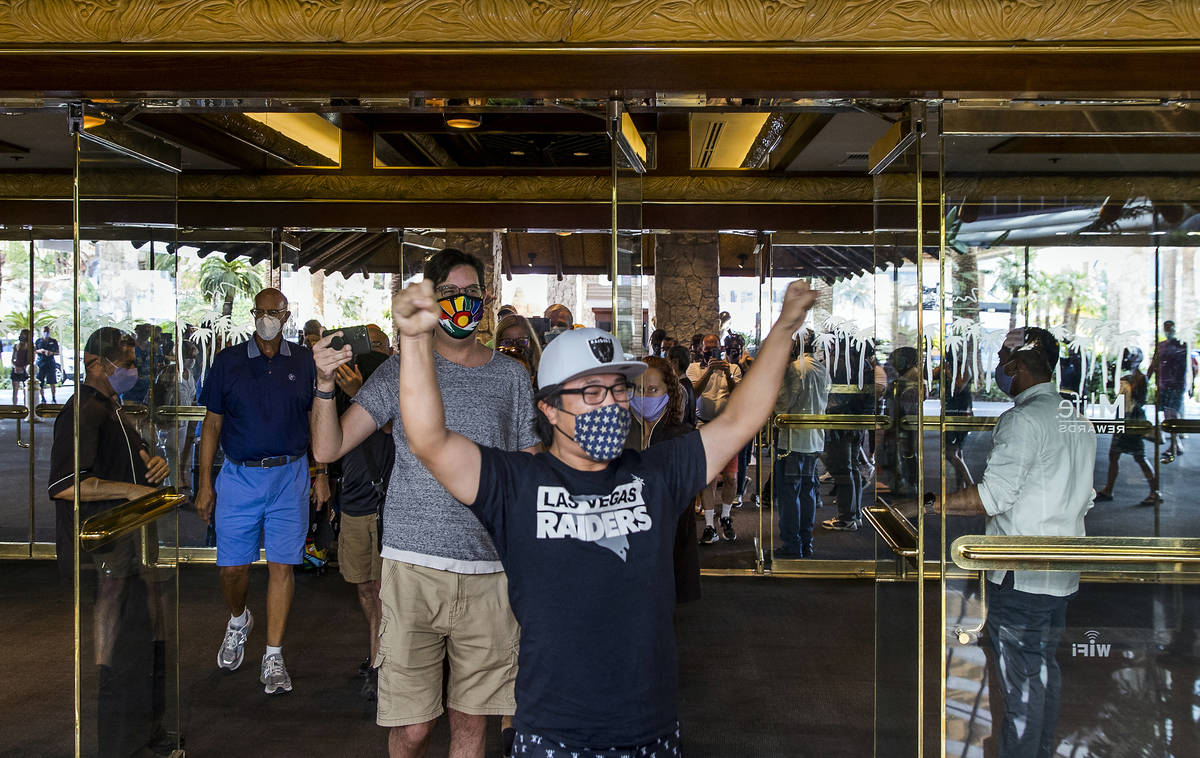 Kohei Munemura raises his arms in celebration as he and others enter the Mirage as it reopens on Thursday, August 27, 2020, in Las Vegas. (L.E. Baskow/Las Vegas Review-Journal) @Left_Eye_Images 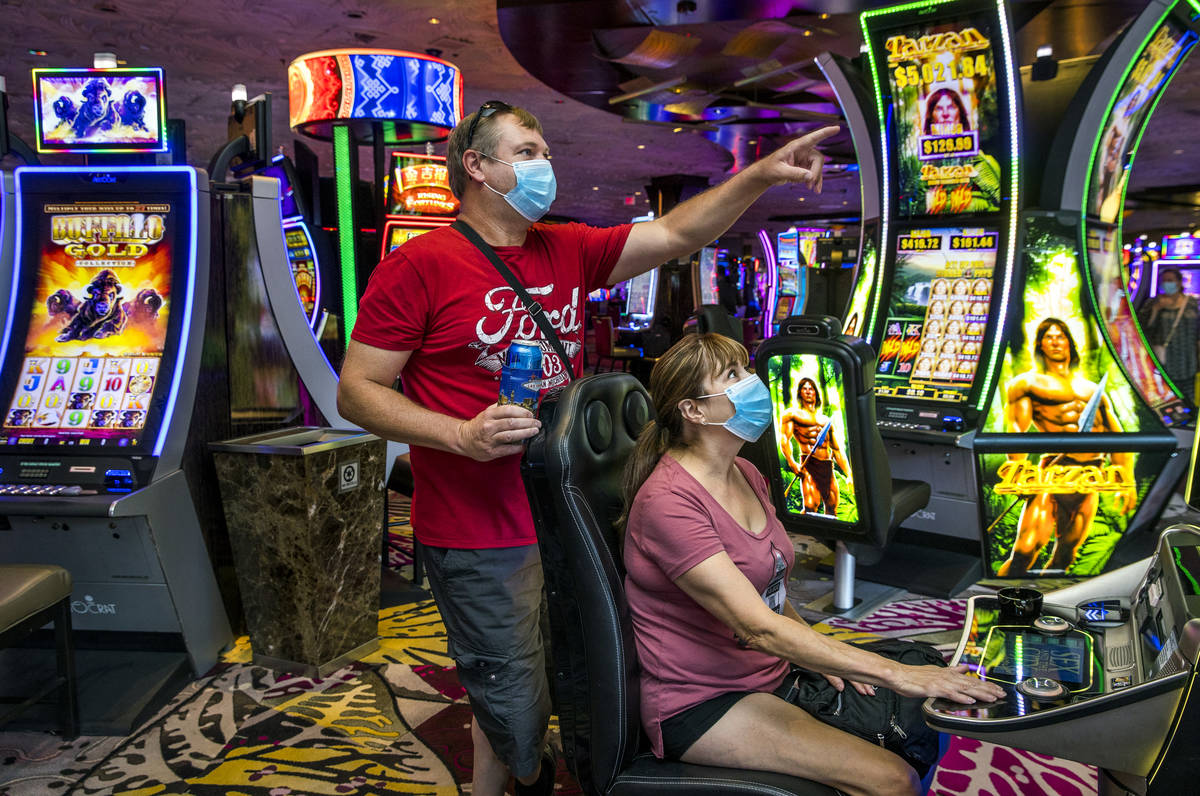 John and Julie Dumpprope from Innergrove Heights, Minn., look to their Sex in the City slot machine as it hits a winner during the Mirage reopening on Thursday, August 27, 2020, in Las Vegas. (L.E. Baskow/Las Vegas Review-Journal) @Left_Eye_Images 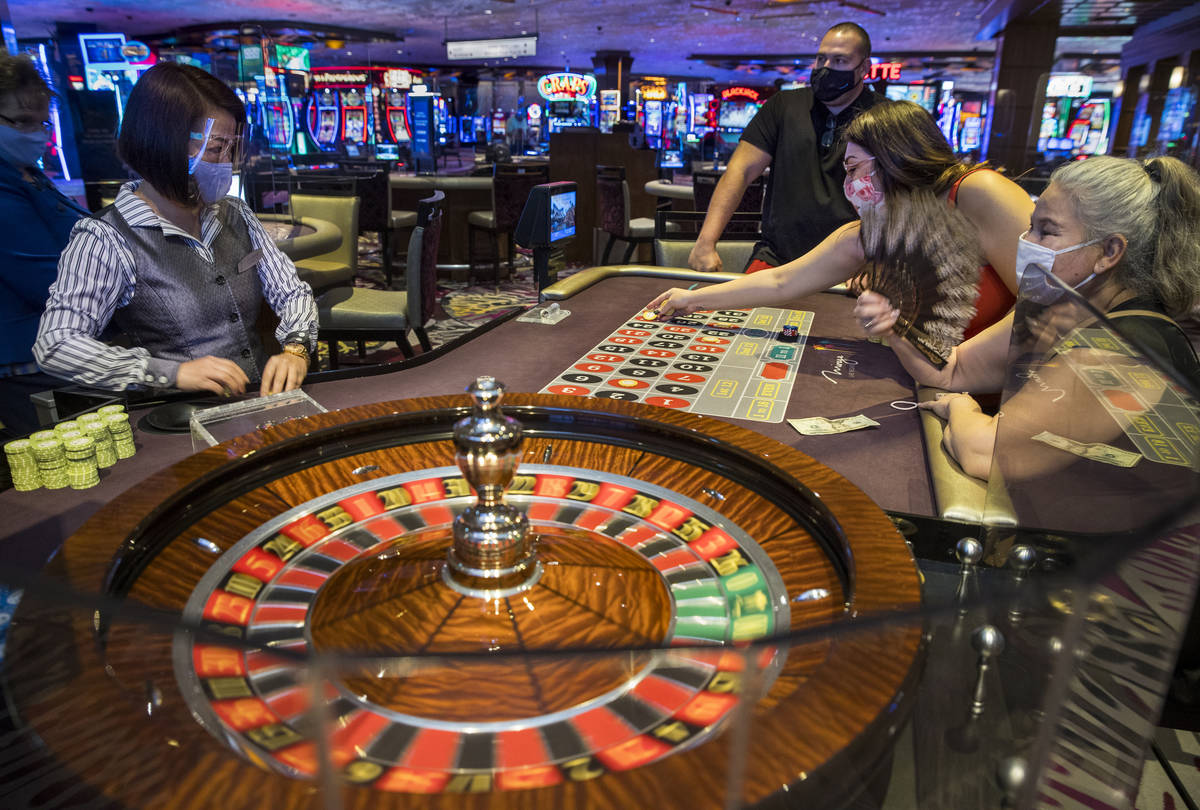 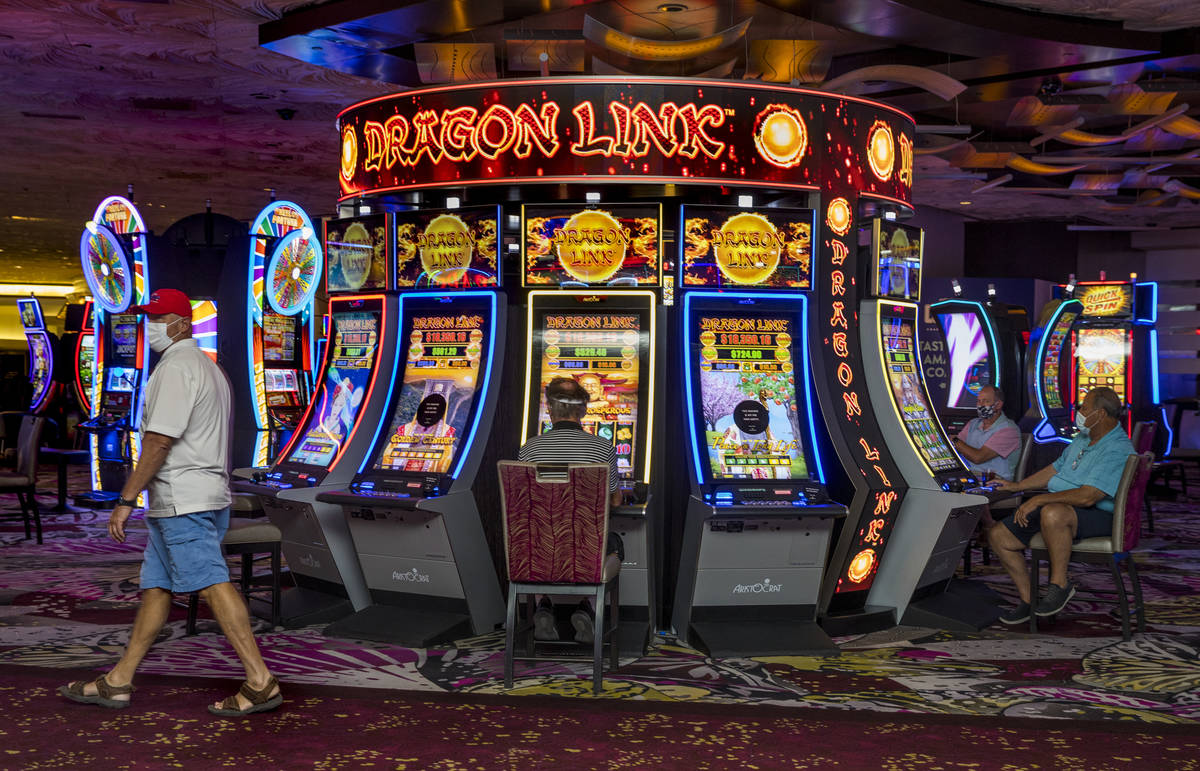 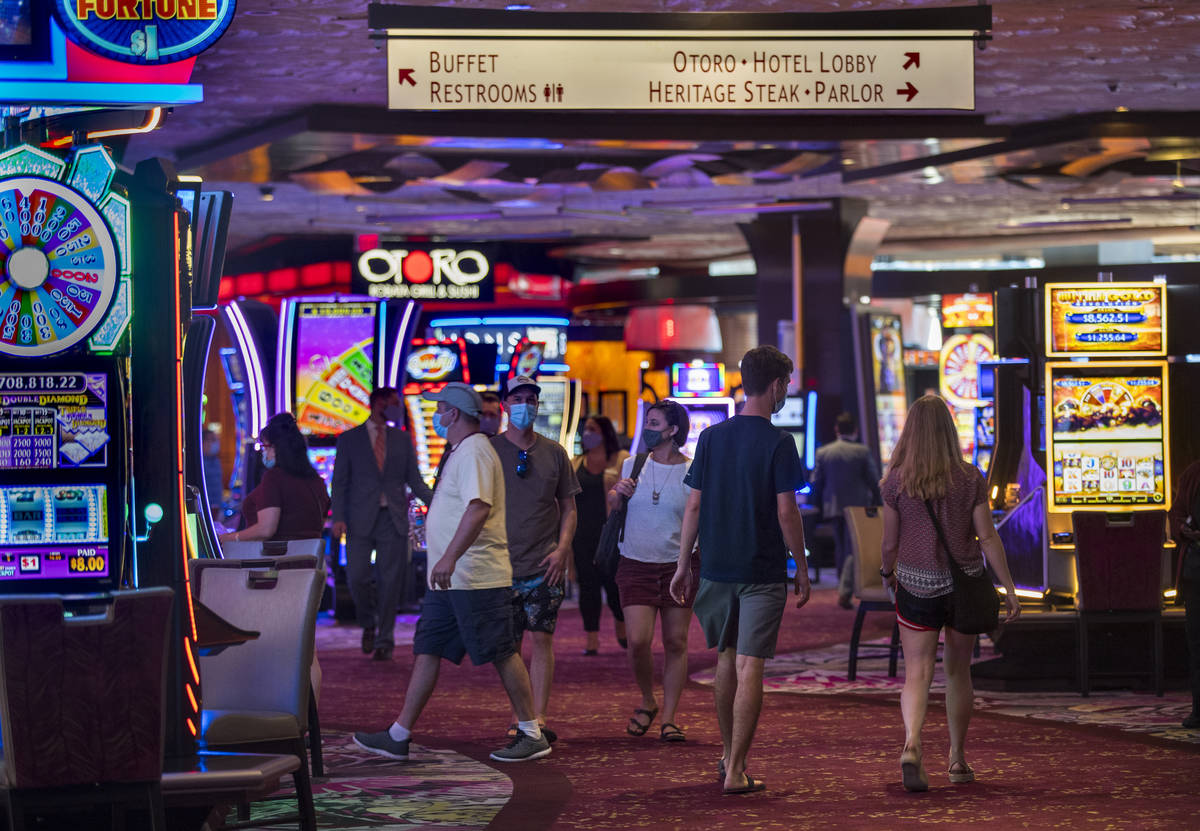 Guests wander about a main walkway in the casino as the Mirage reopens following a COVID-19 shutdown on Thursday, Aug. 27, 2020, in Las Vegas. (L.E. Baskow/Las Vegas Review-Journal) @Left_Eye_Images 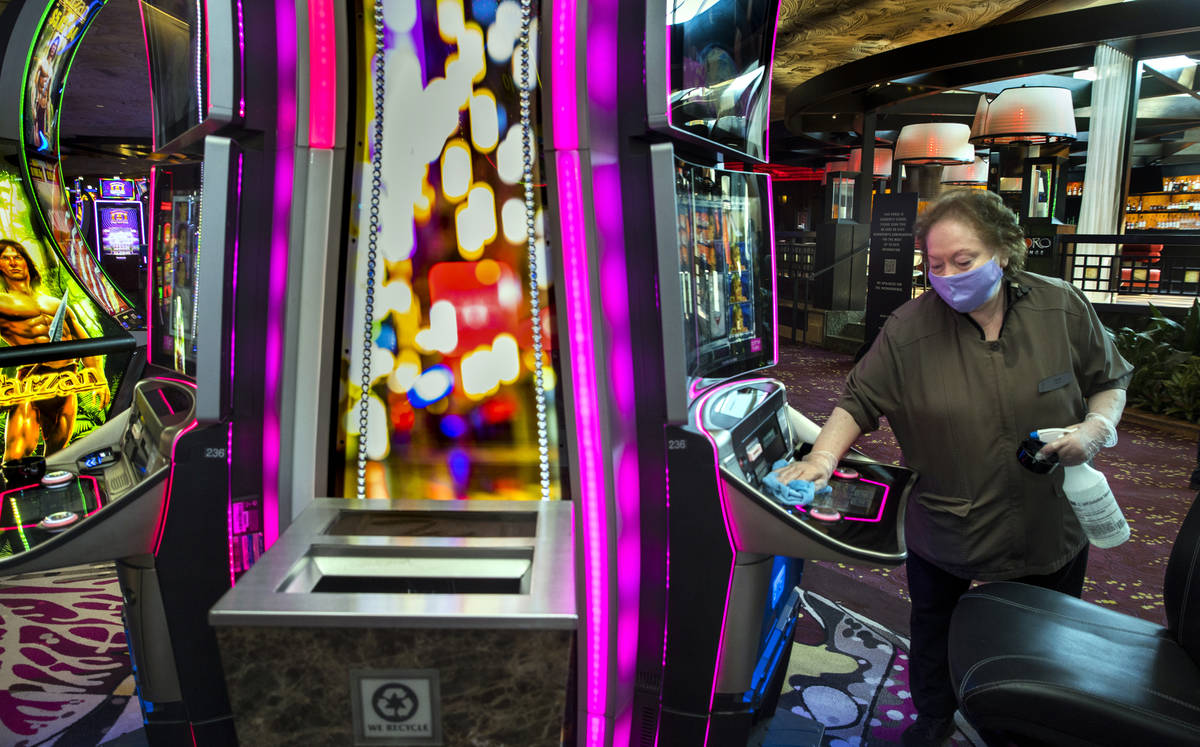 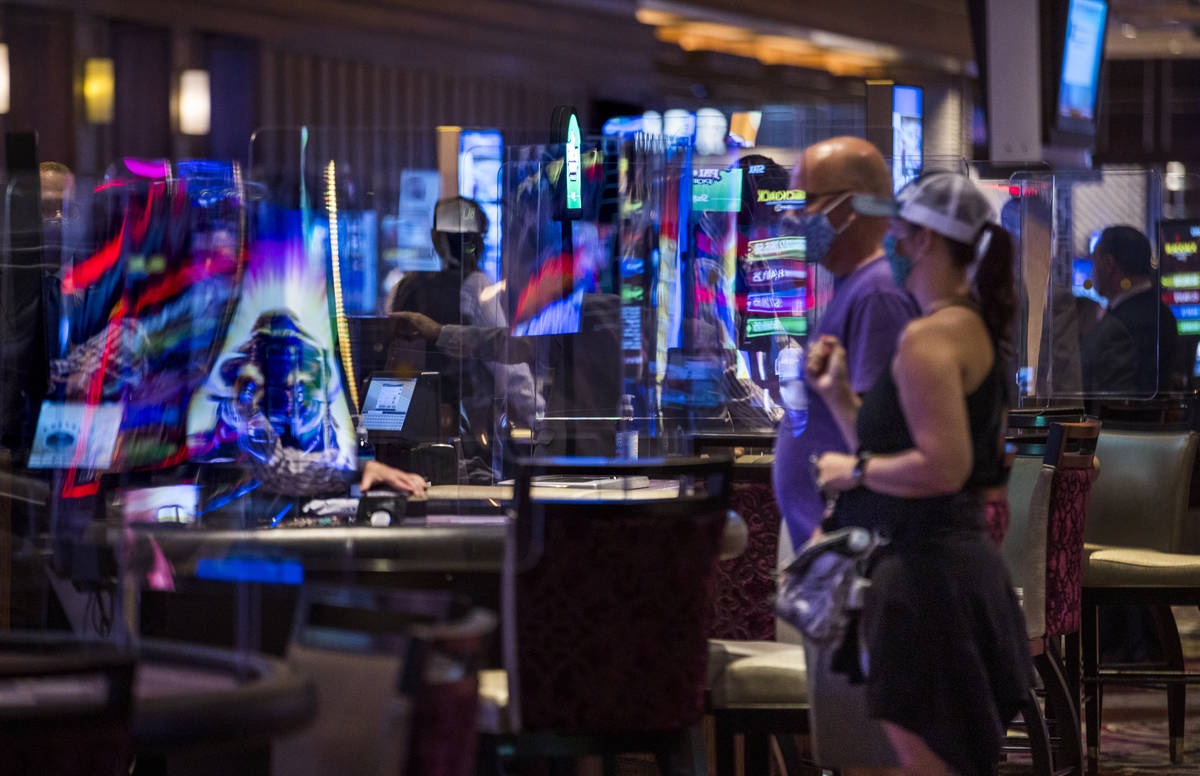 Guests approach a table game as the plexiglass reflects the electronic lights in the casino as the Mirage reopens following a COVID-19 shutdown on Thursday, Aug. 27, 2020, in Las Vegas. (L.E. Baskow/Las Vegas Review-Journal) @Left_Eye_Images 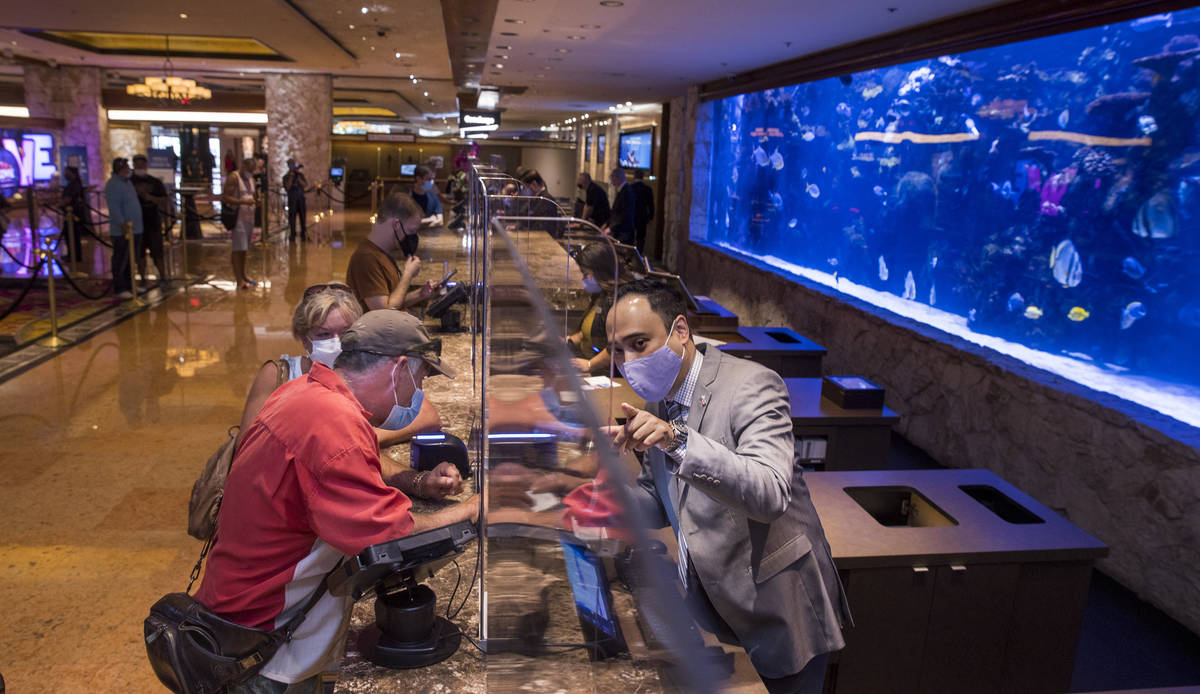 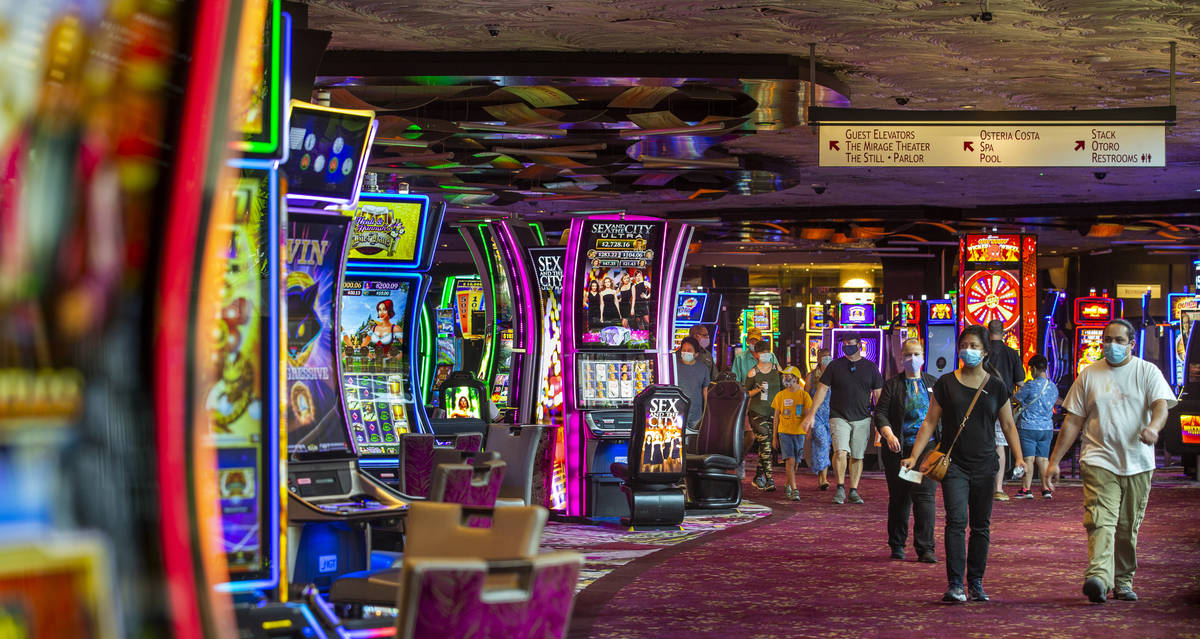 Guests make their way through one of the slots areas as the Mirage reopens following a COVID-19 shutdown on Thursday, Aug. 27, 2020, in Las Vegas. (L.E. Baskow/Las Vegas Review-Journal) @Left_Eye_Images 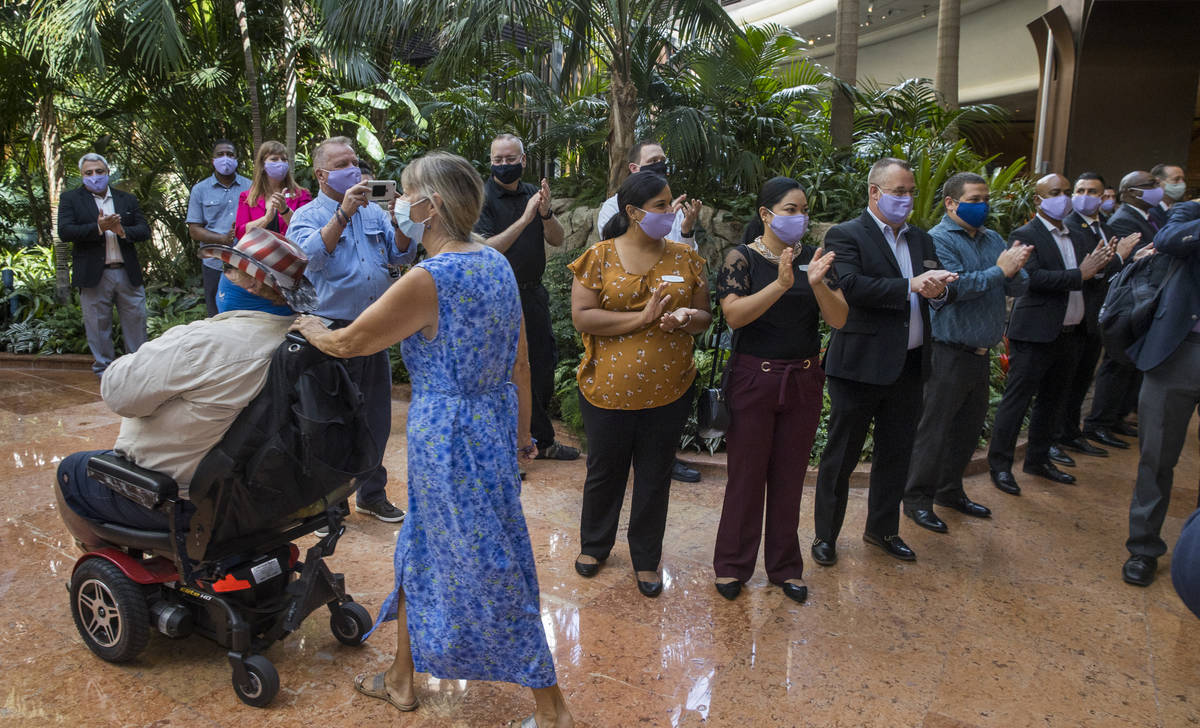 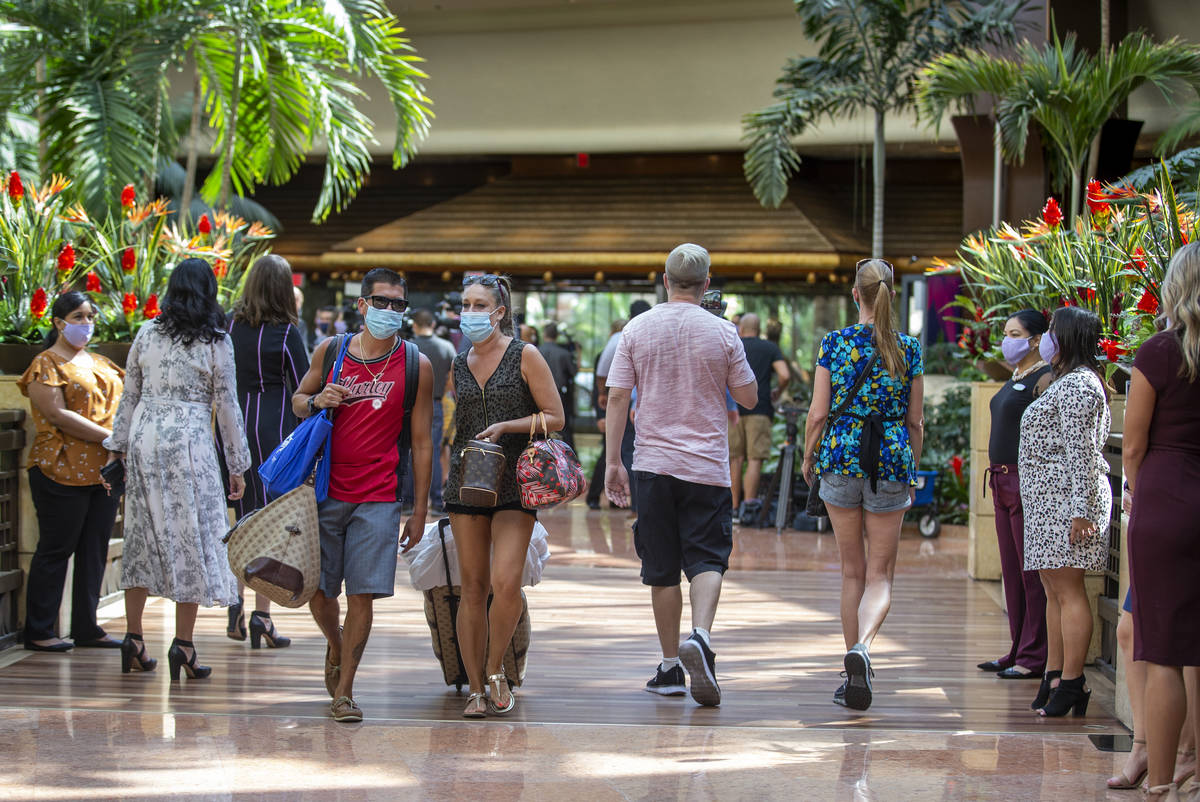 Guests make their way through the atrium as the Mirage reopens following a COVID-19 shutdown on Thursday, Aug. 27, 2020, in Las Vegas. (L.E. Baskow/Las Vegas Review-Journal) @Left_Eye_Images 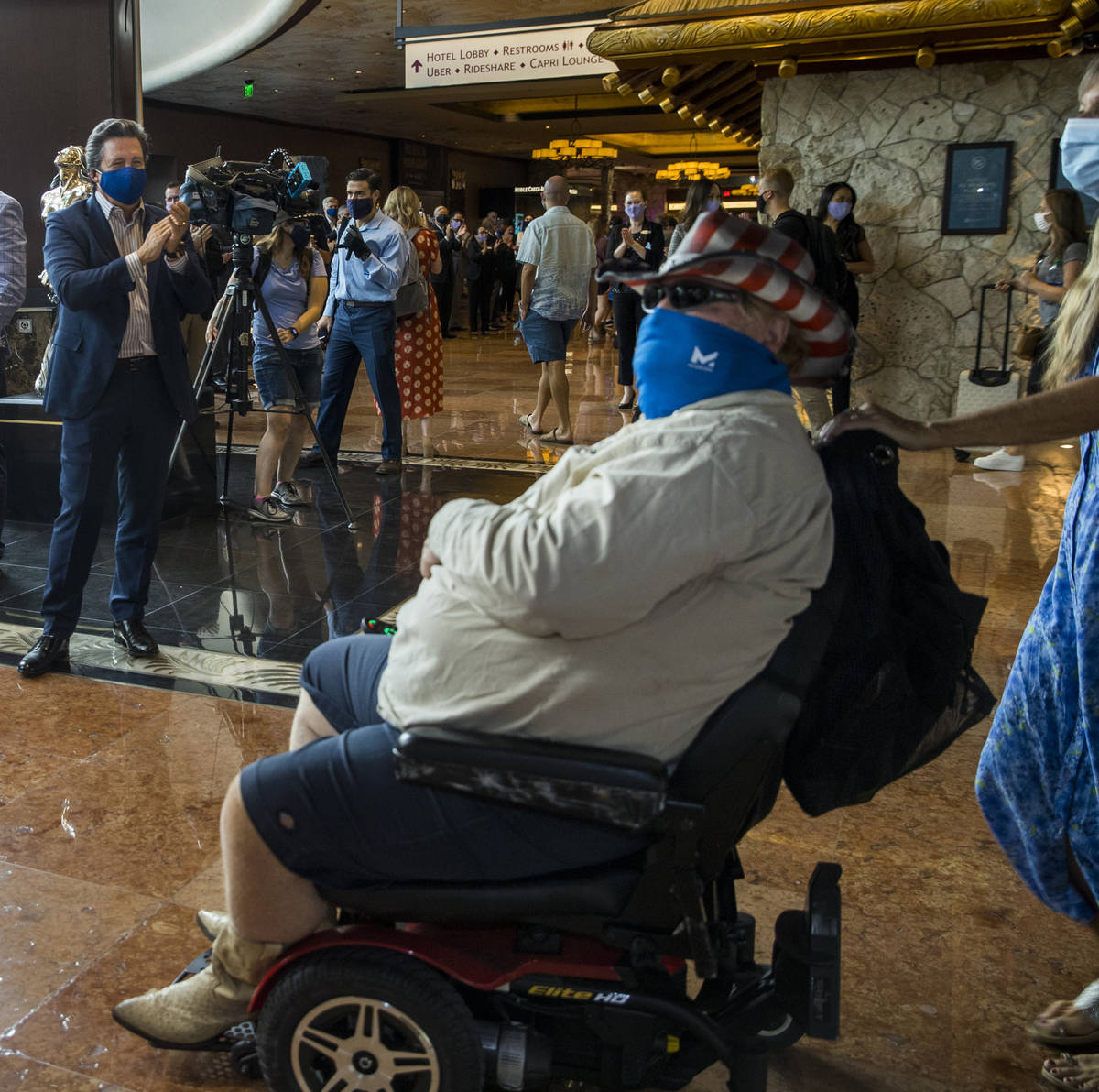 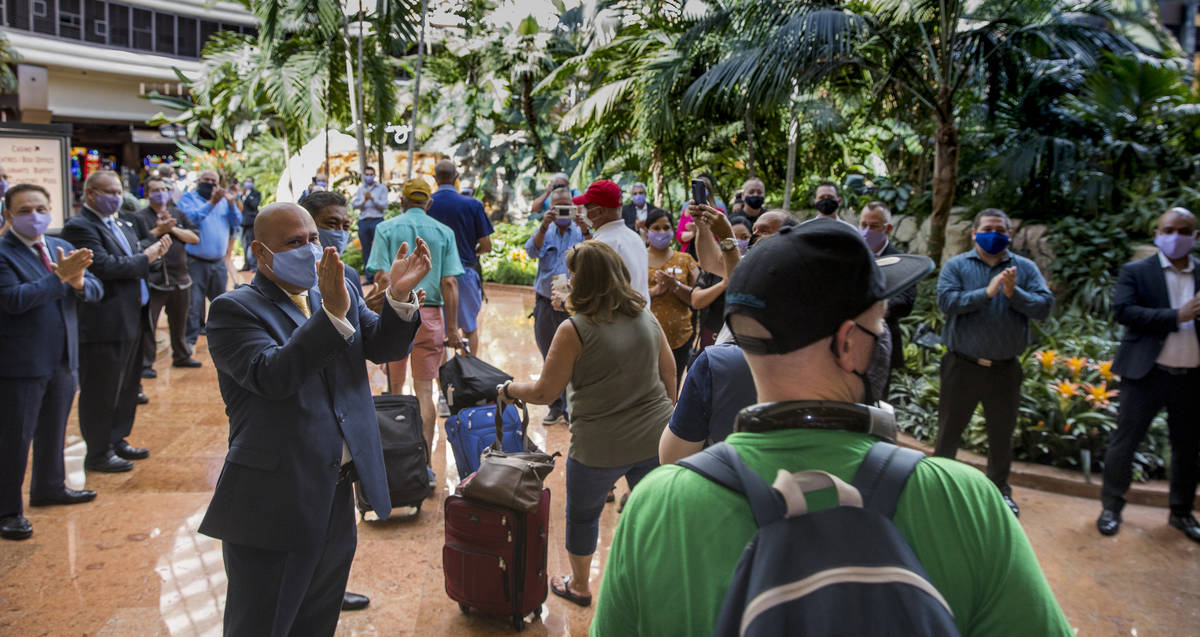 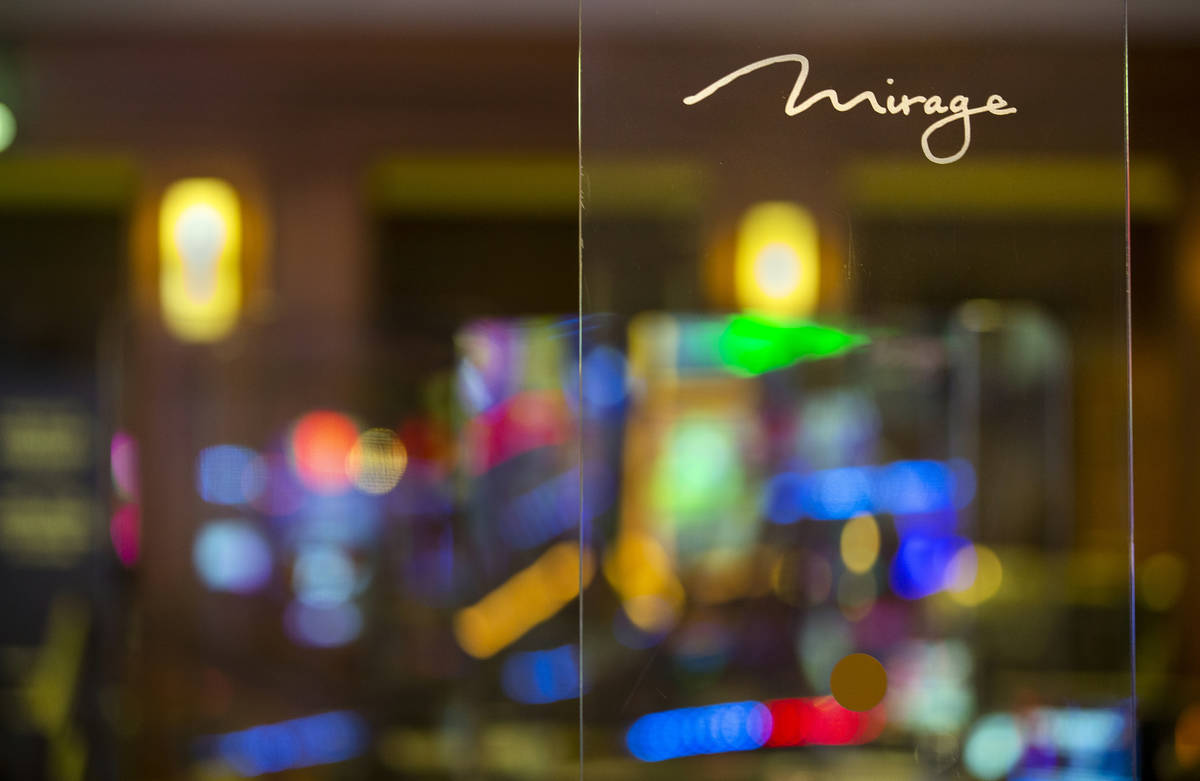 Plexiglass is installed throughout many areas as the Mirage reopens following a COVID-19 shutdown on Thursday, Aug. 27, 2020, in Las Vegas. (L.E. Baskow/Las Vegas Review-Journal) @Left_Eye_Images 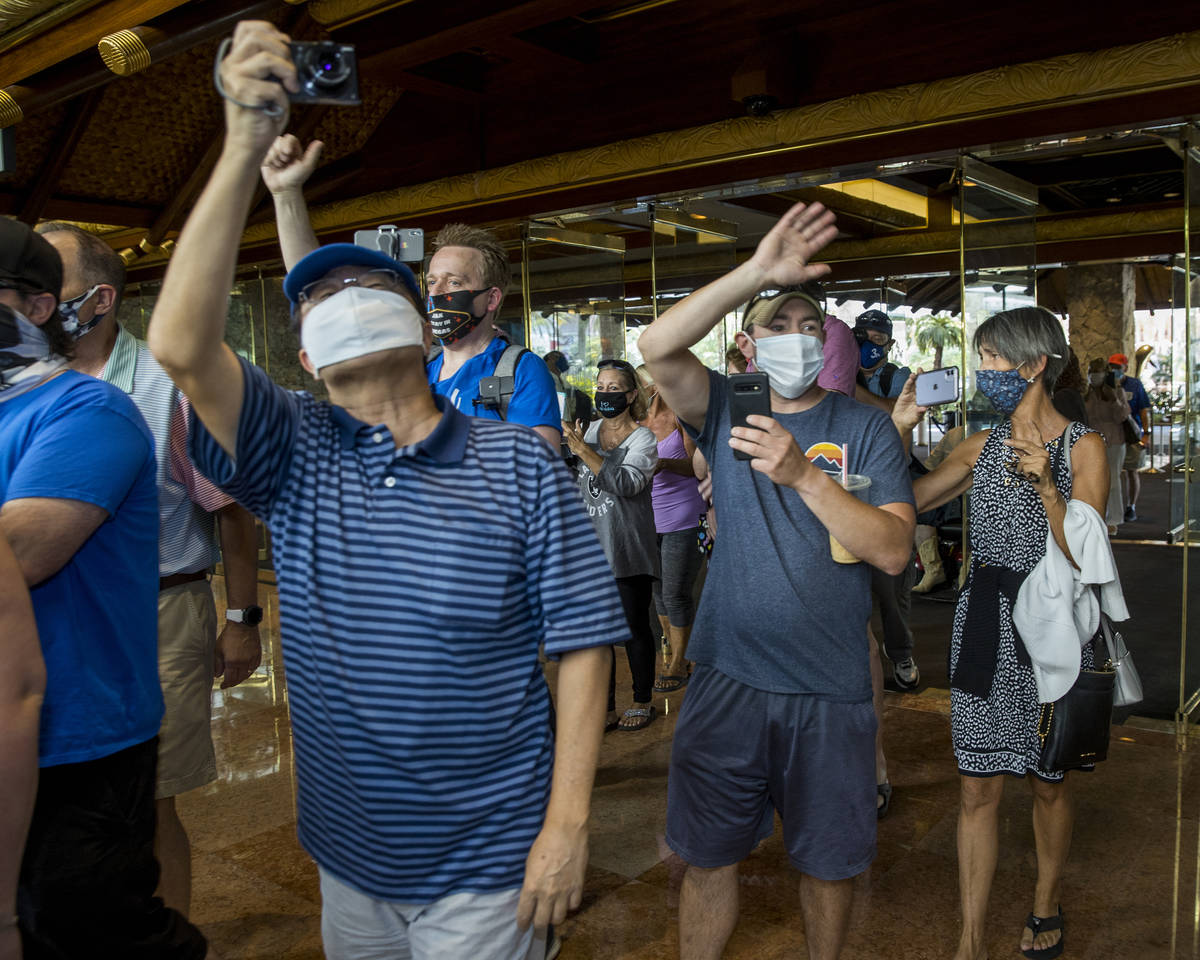 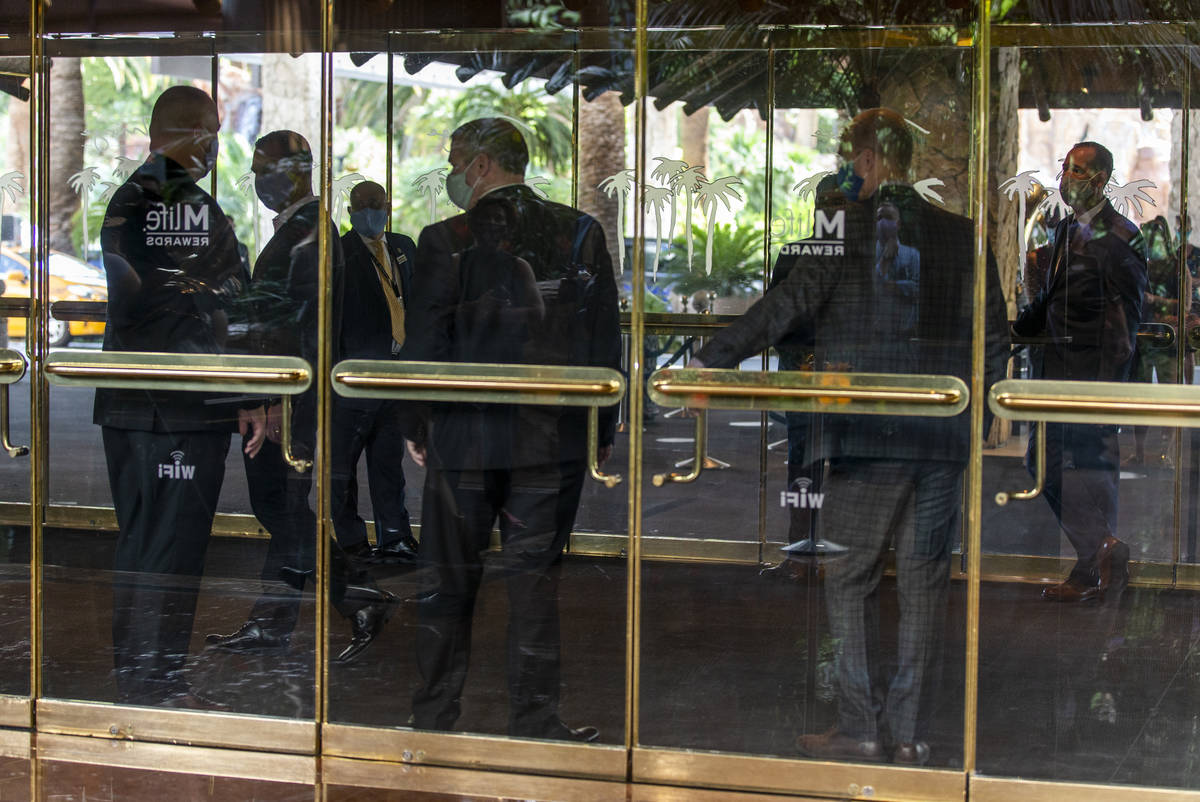 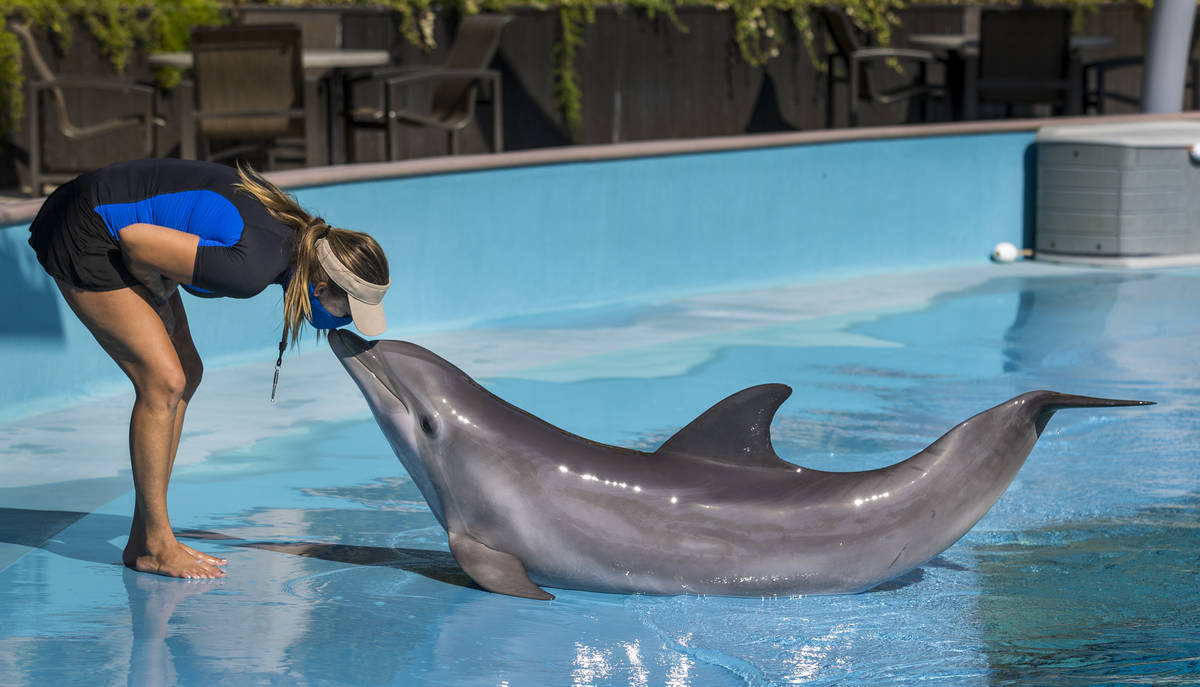 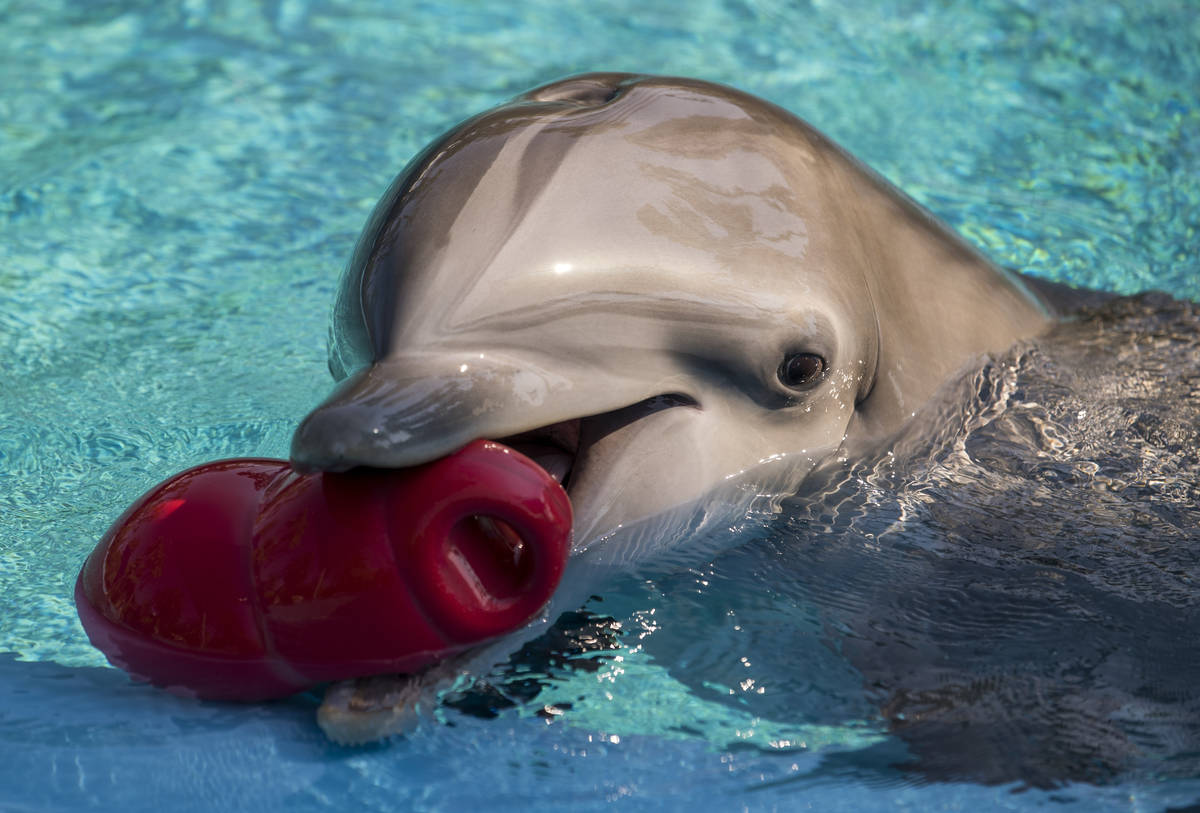 A dolphin plays with a toy within Siegfried & Roy's Secret Garden and Dolphin Habitat as the Mirage reopens following a COVID-19 shutdown on Thursday, Aug. 27, 2020, in Las Vegas. (L.E. Baskow/Las Vegas Review-Journal) @Left_Eye_Images 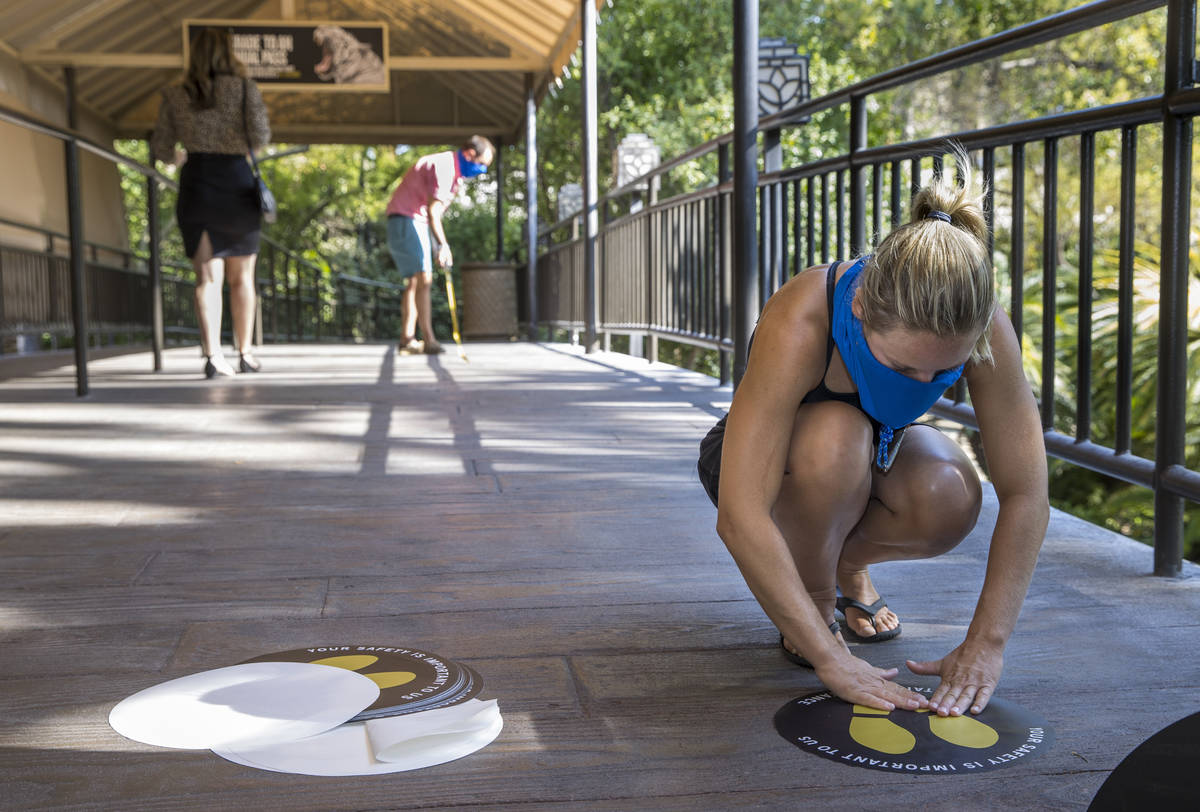 Whether it’s October 1989 or August 2020, Bill Hornbuckle knows where to hit his mark.

“I opened this place in ‘89, and I stood out there today in the exact same place,” said the MGM Resorts CEO who was Mirage’s vice president of operations when the hotel opened. “The memories of that time, what it meant to the community then, came back. This was the grandfather of the integrated resorts.”

Mirage has opened a second time on the Strip, returning to action Thursday morning. The place was such a new and fancical resort in its original opening that “integrated” had not even been used to describe a hotel-casino.

“We just used ‘mega resort,’” Hornbuckle said after welcoming a stream of new guests at the hotel’s main entrance. “It’s a special place.”

Mirage is again in a pivotal role in drawing tourism to the Strip. It is MGM Resort’s eighth property to reopen since the March COVID shutdown of the Strip. Hornbuckle says the remaining property, Park MGM, is targeted for Oct. 1 — but only if Mirage hits its numbers in September. He said it is possible NoMad Hotel, inside Park MGM, could open separately.

“We’re going to monitor business through September,” Hornbuckle said. “(Park MGM) is in the middle of Las Vegas Boulevard and would be great to open for obvious reasons. But without Park Theater being open, it’s a challenge. That is the venue that drives that property.”

(Listen to Katsilometes’ interview with Hornbuckle below).

The exec says business is booster by the Southern California drive-in crowd. “Weekends are going to be super,” he said. “Midweek is going to be less.”

Ticketed entertainment — a Mirage hallmark, as it hosted Siegfried & Roy for 13 years and has had up to seven shows running concurrently — remains closed throughout the property. Shows and headliners that are dark or in limbo include the Cirque-Beatles show “Love”; Boyz II Men, magician Shin Lim and the “Aces of Comedy” series at Mirage Theater. There are no announced plans at the former 1 Oak Nightclub, where most recently Matt Goss performed an ongoing Sunday-night series.

But the dolphins were back at play Thursday morning. That attraction celebrates its 30th anniversary in November. As for the Mirage’s ongoing bond with Siegfried Fischbacher, MGM Resorts has named the street leading into the main entrance Siegfried And Roy Drive.

When it opened 31 years ago, the Mirage was seen as a grandiose, ground-breaking resort, with it’s 3,044-room capacity, triple-tower design and porte cochere dramatically set far back from the Strip. It’s famous volcano (which was also re-ignited on Thursday night) was the inspiration for Bellagio Fountains and, until it closed in 2013, the pirate show next door at Treasure Island.

But today, as it reopens, Mirage is operating at a reduced scale, sprouting back to its majestic heyday.

“People now will have this boutique experience,” Mirage President and COO Nik Rytterstrom said. “I think we are going to see this as a unique property as we reunite guests with the property. This is still a home away from home for so many people.”

In MGM Resorts’ upper-level layoffs and restructuring in May, Rytterstrom has also been assigned the dual role Excalibur’s president. Park MGM/Bellagio President and COO Anton Nikodemus and Mandalay Bay/Luxor President and COO Chuck Bowling also showed up to support the Mirage’s reopening.

Hornbuckle said the hotel’s spread-out casino design might remain, even after COVID’s social-distancing protocols are relaxed. Some 800 video-gaming machines have been pulled from the casino.

“On the slots floor, you see a huge social distancing, and people are really acclimating to,” Hornbuckle said. “This might be a new, unique and fun environment. This could be the floor of the future, no matter what happens.”

Hornbuckle last week reminded the community of his history at the Mirage, posing with his wife, Wendy, at the Dolphin Habitat. They ran into an old friend: Duchess, an original Mirage dolphin.

Hornbuckle allowed that he had chills at the reopening, saying, “Every time I walk through these doors, even 30 years later, I get that feeling.”