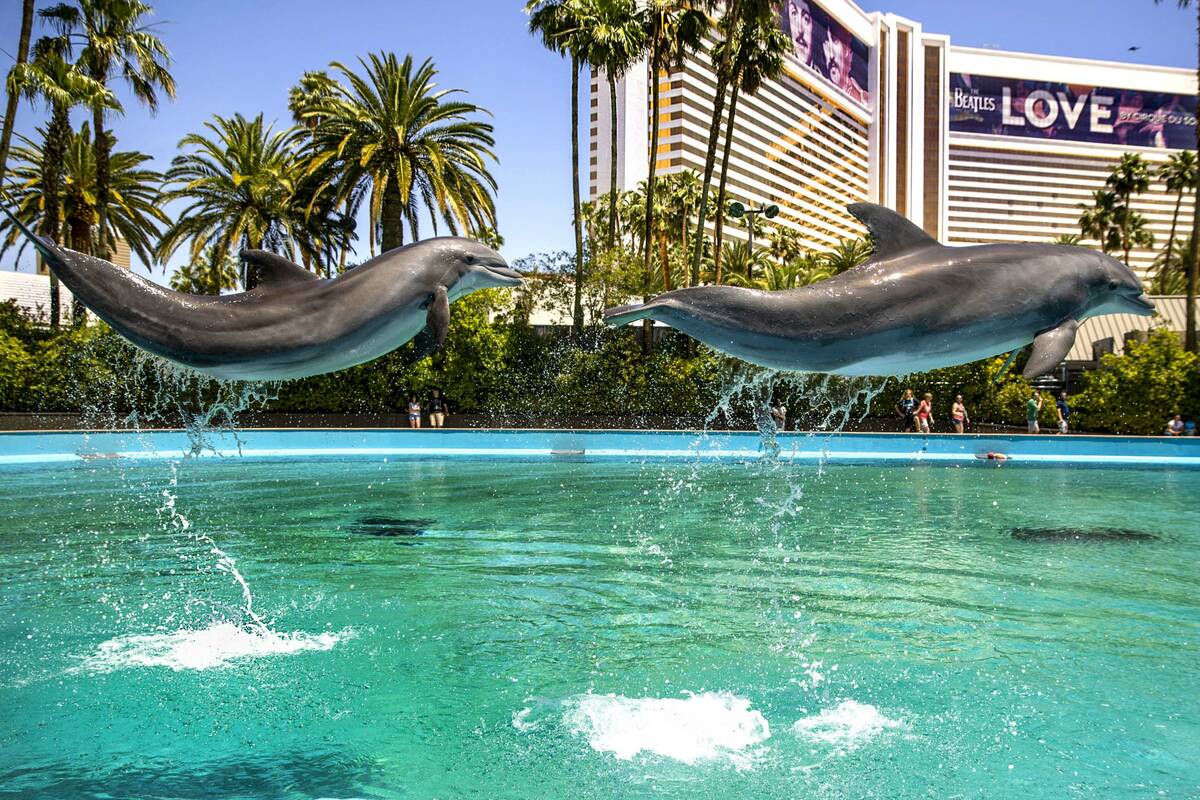 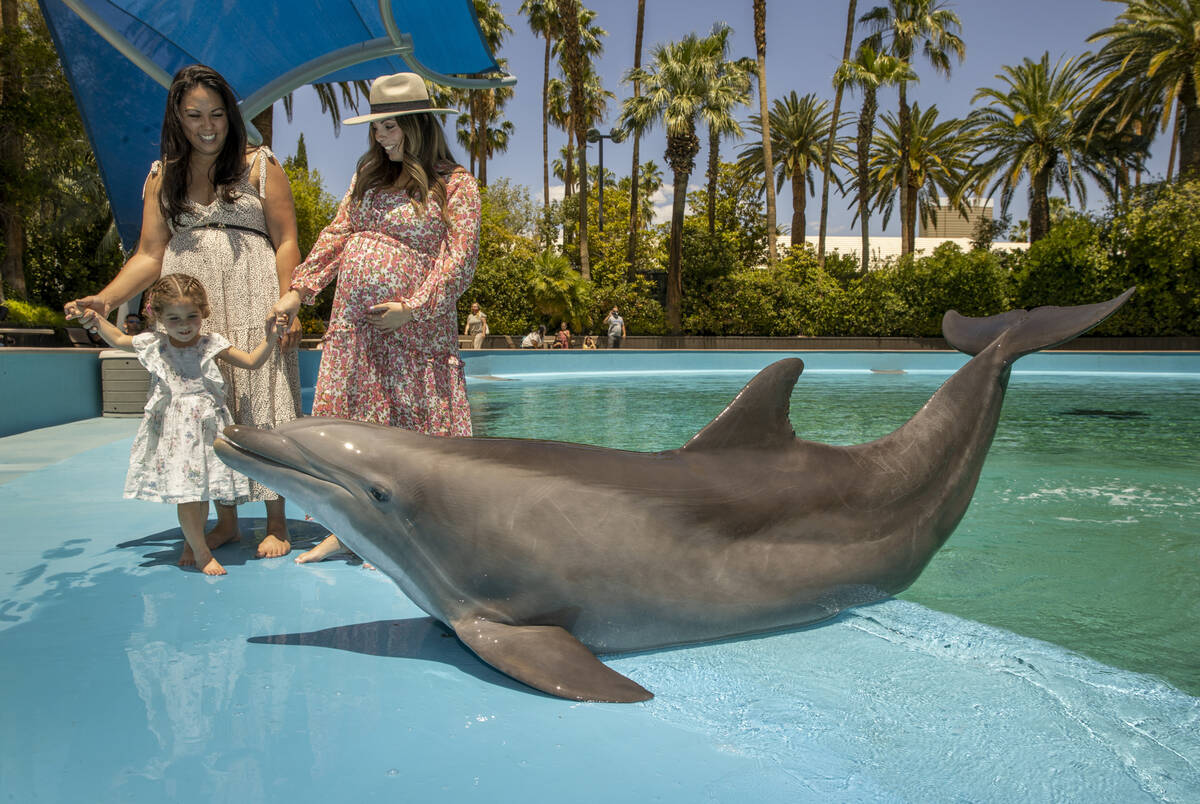 Rachel Villanueva, from left, and her daughter Sophie Santos, 3, with Alexandra Lourdes greet Maverick during a "meet-and-greet" tour at the Siegfried & Roy's Secret Garden and Dolphin Habitat at Mirage on Monday, May 17, 2021, in Las Vegas. (L.E. Baskow/Las Vegas Review-Journal) @Left_Eye_Images 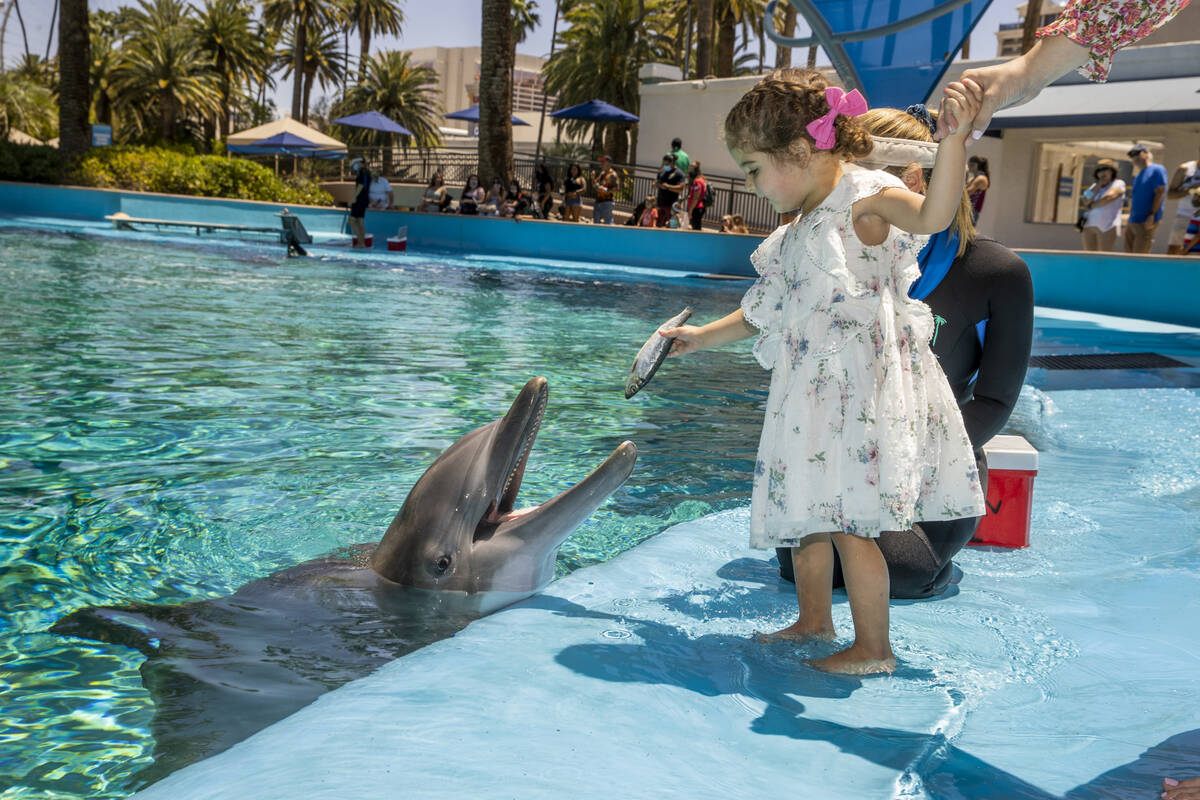 Sophie Santos, 3, center, feeds Maverick with instructions from Dolphin Care Specialist Jen Schwab, behind, during a "meet-and-greet" tour at the Siegfried & Roy's Secret Garden and Dolphin Habitat at Mirage on Monday, May 17, 2021, in Las Vegas. (L.E. Baskow/Las Vegas Review-Journal) @Left_Eye_Images 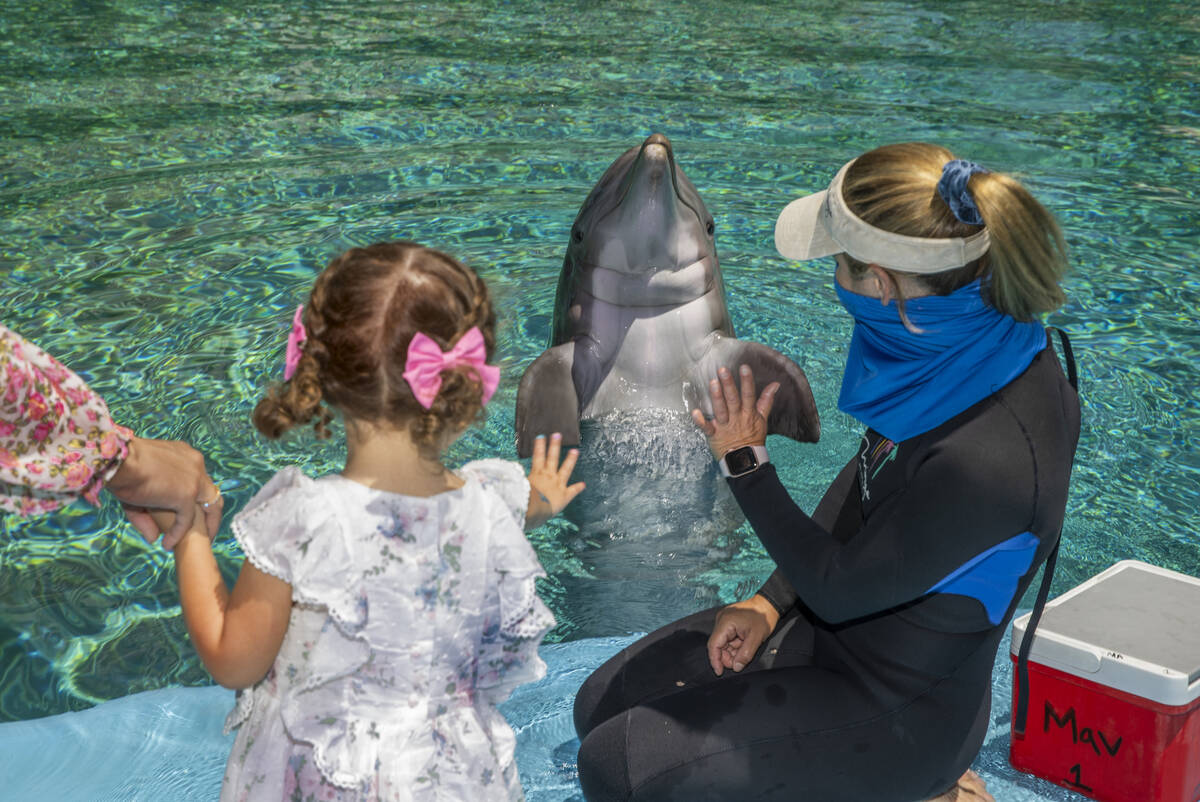 Siegfried & Roy’s Secret Garden and Dolphin Habitat, a popular attraction at The Mirage for more than three decades, is closing permanently.

The decision to shut down the attraction and move the animals was announced Tuesday in a joint memo from interim Mirage President Franz Kallao and Hard Rock Las Vegas President Joe Lupo.

Details about when and where the animals will be relocated were not part of the announcement. But it is clear that the habitat is not in the long-term plans for incoming property owner Hard Rock Hotel.

The attraction has been closed since late September after the death of the bottlenose dolphin K2 on Sept. 25. K2 was the third dolphin death this year at the habitat, and a team of animal and other experts have been investigating the circumstances of the deaths.

“Hard Rock’s leadership team has spent several months considering options and discussing the facility openly with your leadership teams at both The Mirage and MGM Resorts,” the dual company letter read. “As Hard Rock has thought about its vision for The Mirage post-close, the team has determined that the best course of action is to wind down and, eventually, permanently close the Secret Garden and Dolphin Habitat prior to the commencement of construction of the Guitar Hotel and other planned transformational redevelopments of The Mirage.”

The animals will be relocated to homes presided over by “well-trained, highly respected animal care professionals and veterinary experts,” the statement said.

People for the Ethical Treatment of Animals (PETA) applauded the decision.:

“Big cats belong in the jungle, not behind bars in a casino sideshow, and a desert is no place for a dolphin,” PETA Foundation General Counsel for Captive Animal Law Enforcement Brittany Peet said in a statement. “PETA is encouraging Hard Rock to usher in its new animal-free era by finding reputable new homes for the big cats and working to get the dolphins to a seaside sanctuary where they could have more natural lives in spacious habitats, far from the lights and noise of the Strip.”

Hard Rock also has announced plans to close down the volcano that faces the Strip during its renovation. The long-range vision for the Cirque du Soleil-Beatles production “Love” is not yet decided after its commitment to run through 2023 ends.

The Secret Garden opened in 1990 and has been home to dozens of bottlenose dolphins, white tigers, white lions and leopards. The exotic cats were from the Siegfried and Roy habitat.

Las Vegas Mayor Carolyn Goodman first caught the duo long before they headlined at The Mirage, when they were a specialty act in “Lido de Paris” at the Stardust.

“This is heartbreaking to me, because of how much Siegfried and Roy have meant to our city and to tourists of our city from around the world,” she said Tuesday. “The Secret Garden was such a special place and an ambitious project. It is sad to see it end. But when new owners come in, they do what they want.”

Goodman also said she hopes the Siegried & Roy Way sign leading to the property, which she helped enact, will remain in the Hard Rock Las Vegas era.

“It would only be right,” she said. “We have so many streets honoring our great legends, Frank Sinatra, Dean Martin, Sammy Davis Jr. I hope that sign stays on the Strip.”

Siegfried Fischbacher was known to visit the habitat regularly to mingle with guests and show off sleight-of-hand magic by making coins appear from visitors’ forearms or behind their ears. The Secret Garden was the last public experience under the S&R brand.

Lynette Chappell, the duo’s “Evil Queen” onstage and confidant to Siegfried and Roy for 50 years, said the habitat had “a good run.” She had expected this outcome.

“To be honest, this is not a surprise,” Chappell said Tuesday afternoon. “The hotel was wonderful, our tigers and lions were very well-cared for. The staff was exceptional. It was a wonderful experience and a wonderful time.”