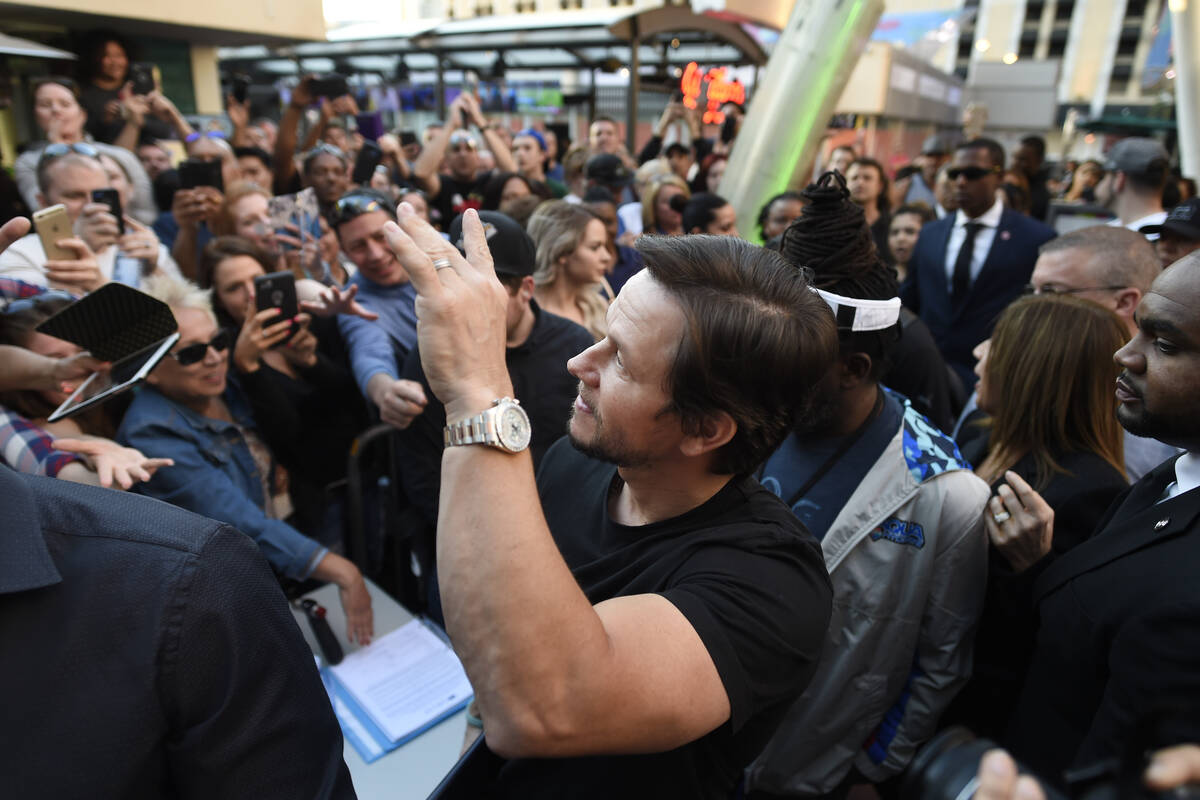 Mark Wahlberg waves to fans as he arrives at a VIP event at Wahlburgers Las Vegas in the Grand Bazaar Shops at Bally's Tuesday, March 28, 2017. (Sam Morris/Las Vegas News Bureau) 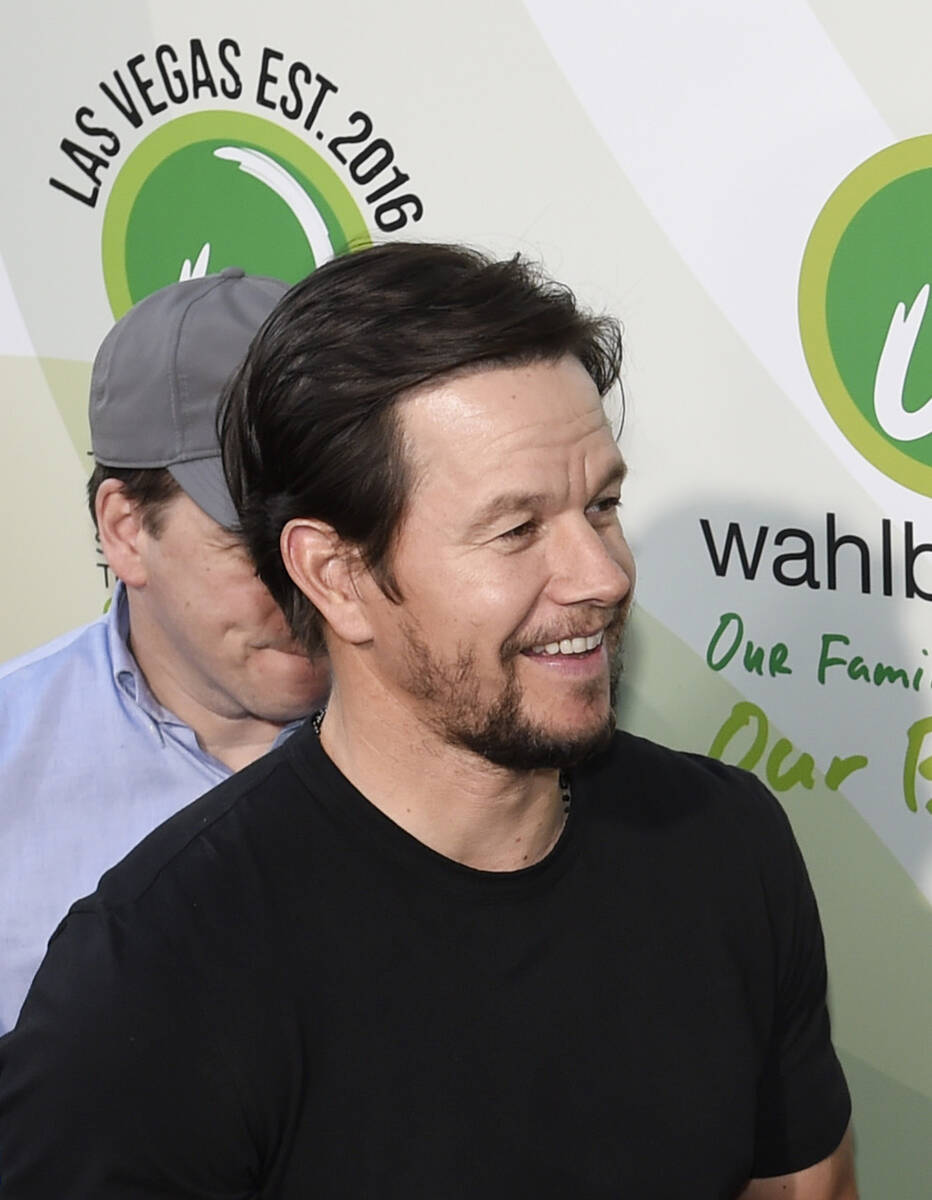 Mark Wahlberg is not moving to Las Vegas.

We need to shift to the present-tense when referring to Vegas plans for the Hollywood A-lister, who has purchased a two-story estate in The Summit Club for $14.5 million.

“My hometown,” is how Wahlberg referred to Las Vegas in the latest episode of BeondTV’s “Lights, Camera, Vegas,” hosted by Rachel Smith. “I live in Nevada. I plan on making, hopefully, a film studio, and we want to build a shoe factory in Nevada.

“We want to create a lot of jobs, and a lot of excitement. Hollywood 2.0.”

Wahlberg has invested in the sneaker resale marketplace StockX. He is also an investor the F45 fitness franchise.

Wahlberg was seated with Kevin Hart, his co-star in in the buddy comedy “Me Time,” released on Netflix on Aug. 26. Hart cut in with, “Smart man,” when Wahlberg stated his new residence in Vegas.

Wahlberg’s kids reportedly attend Bishop Gorman High School, which is why he called out, “Bishop Gorman!” during the chat.

“I already went to their first game,” apparently a reference to the Gaels’ vaunted football team. Wahlberg and his wife, model Rhea Durham, have four kids.

Wahlberg has an interest in Las Vegas already, at Wahlburger’s at Grand Bazaar Shops in front of Bally’s on the Strip. The restaurant is partnership between Wahlberg and his brother Paul Wahlberg.

At the restaurant’s opening in March 2017, he said, “Las Vegas is the entertainment mecca of the world and it just continues to grow. This is a place we have always wanted to be, from early on … It’s our family reaching out to your family.”

Mat Franco and his wife, Tianna, announced last week they are expecting their first child. He will be a boy, due the first week in January. The parents have significantly narrowed the field for his name.

“We’re down to two. I think we’re gonna go with … well, we don’t know yet,” Franco said in a phone chat Thursday. “I’m actually not sure how we’ll decide. I don’t know (if) we want to commit to the name before even seeing the baby. What if you see the baby and go, ‘Yeah, I’m not sure if that name works?’ ”

“We’re leaning toward the family one,” Franco said. “Someone in our family has a really cool name.”

About a month before the fifth anniversary of the Oct. 1 shooting at Route 91 Harvest on the Strip, the artist onstage during the tragedy has been dropped by his PR team.

The GreenRoom, a leading country-music PR company, announced it was parting ways with superstar Jason Aldean after his wife, social-media influencer Brittany Aldean, made comments many followers deemed transphobic.

GreenRoom co-owner Tyne Parrish said in a statement issued Thursday: “Music has always been and remains The GreenRoom’s core focus, so we had to make the difficult decision after 17 years to step away from representing Jason. We aren’t the best people for the gig anymore, but will always be big fans of his music — he is one of the greatest live entertainers in country music.”

On Aug. 23, Brittany Aldean posted a before-and-after makeup video on her Instagram account, which has amassed 2.2 million followers. She wrote, “I’d really like to thank my parents for not changing my gender when I went through my tomboy phase. I love this girly life.”

Jason Aldean posted “Lmao!! Im glad they didn’t too, cause you and I wouldn’t have worked out.” He included a laughing emoji.

Three days later, Brittany Aldean went on, “Advocating for the genital mutilation of children under the disguise of love and calling it ‘gender affirming care’ is one of the worst evils…Love is protecting your child until they are mature enough as an adult to make their own life decisions.”

The post sparked backlash from several country artists, with Maren Morris posting, “It’s so easy to, like, not be a scumbag human? Sell your clip-ins and zip it, Insurrection Barbie.”

On Aug. 31, Brittany Aldean posted that her comments were taken out of context. She then unveiled a “Barbie-inspired” collection of conservative merchandise inspired by the Gadsden flag motto, “Don’t Tread On Me” with “Don’t Tread On Our Kids” printed across T-shirts and sweatshirts.

Changes are coming to the long-standing dive bar Hard Hat Lounge at 1675 S. Industrial Road. Extensive work has been done inside the space since its “closing” party on Aug. 26.

The business’s lone Instagram post is a hard hat covered in such stickers as Exxon, Welex and Eastman Whipstock, with the messages, “REOPENING SOON” and “Follow our Story for what’s coming!”

Know this: Hard Hat Lounge will keep the name it’s held since 1958, and the new place will rock.

Carlos Guerrero is a vocalist/musician I run into frequently in VegasVille. Most recently he was driving the band in the Human Nature show at South Point Showroom. At 10 p.m. Sunday, Carlos Guerrero and Friends is shaking the scene at Sand Dollar Lounge on Spring Mountain and Polaris. Guererro promises on Facebook, “Greezy blues, soul and Allman Brothers with a sprinkling of New Orleans flavors.” No cover. And I understand the front man’s birthday is celebrated at midnight.