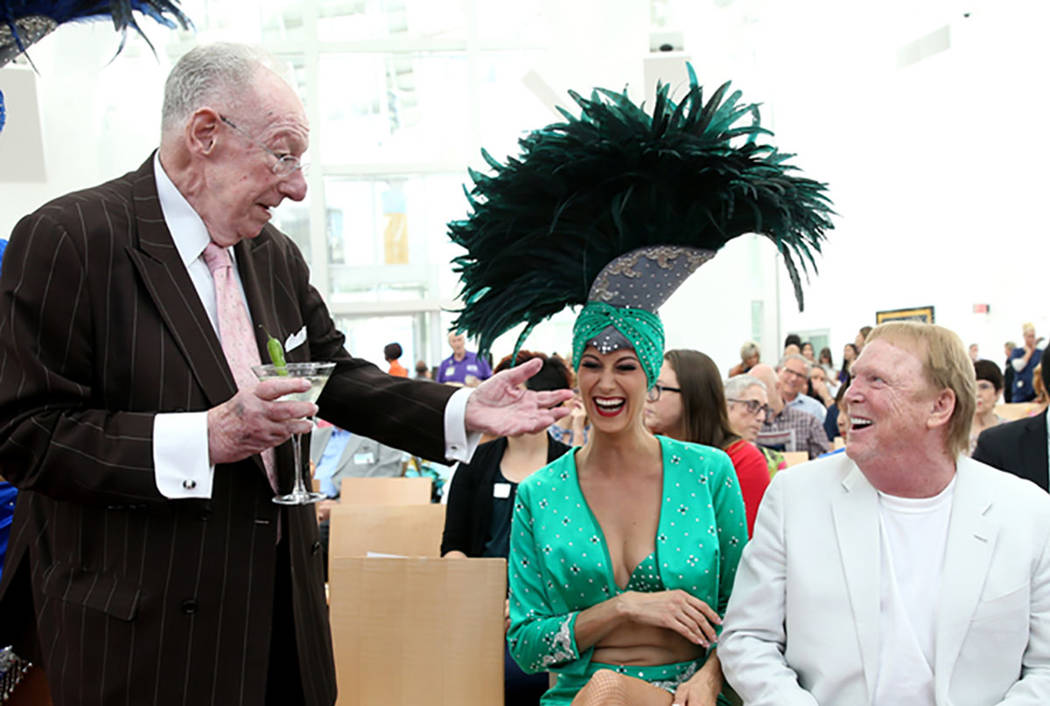 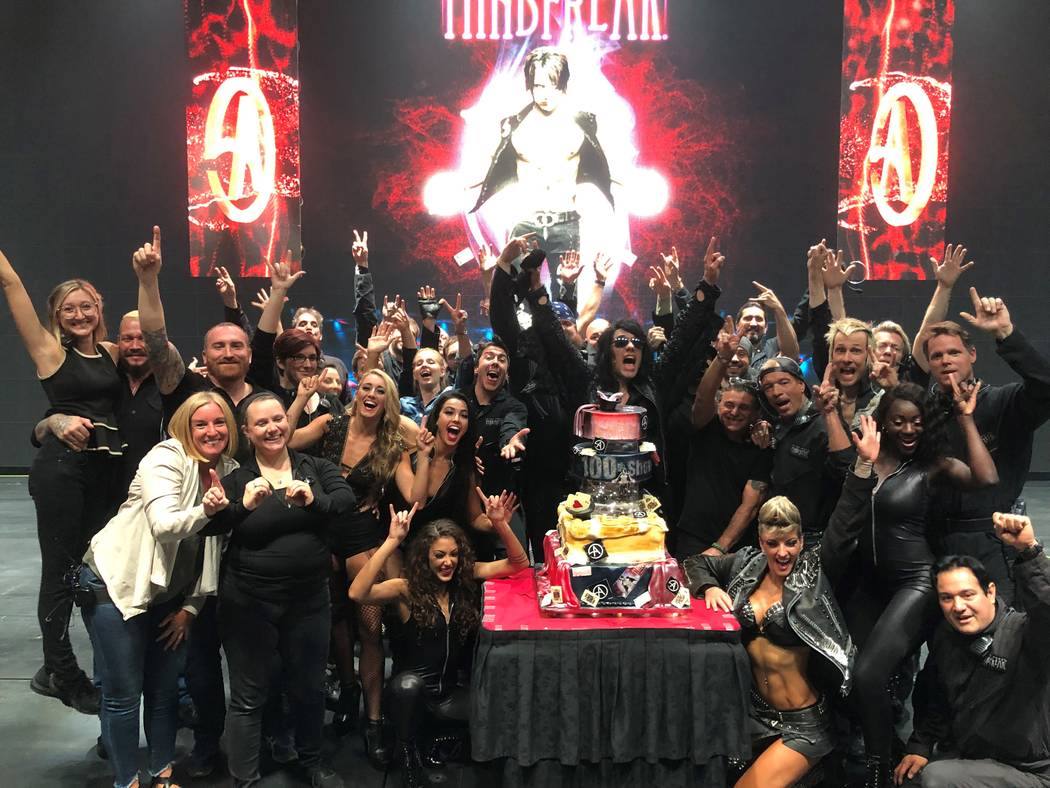 Criss Angel and his crew celebrate his 100th performance at Planet Hollywood on Friday, July 12, 2019. (APWI) 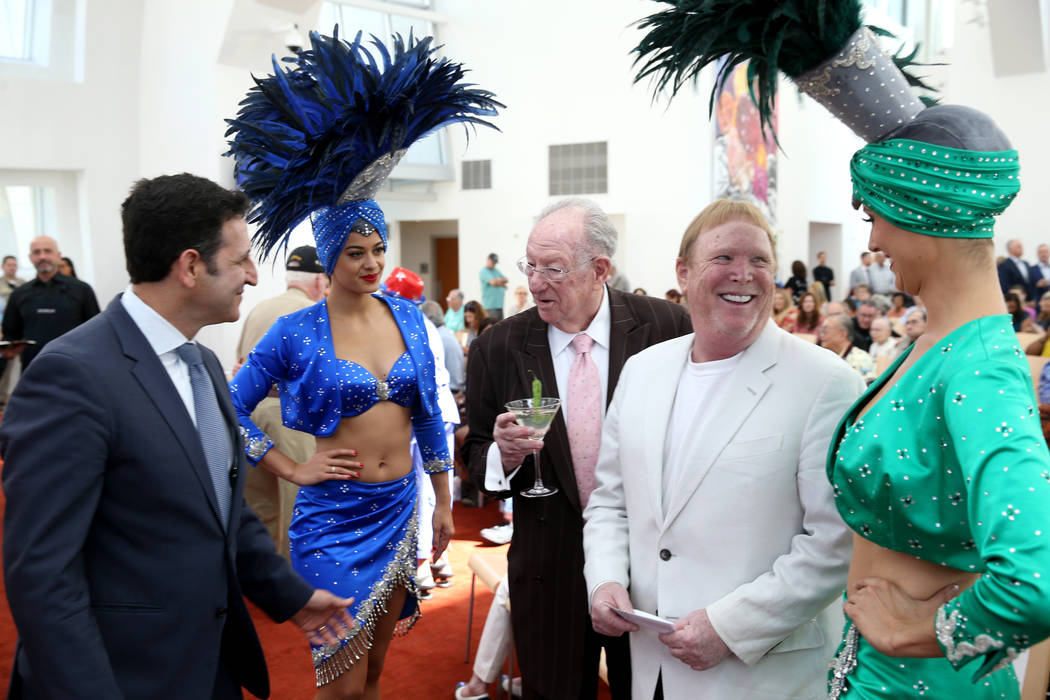 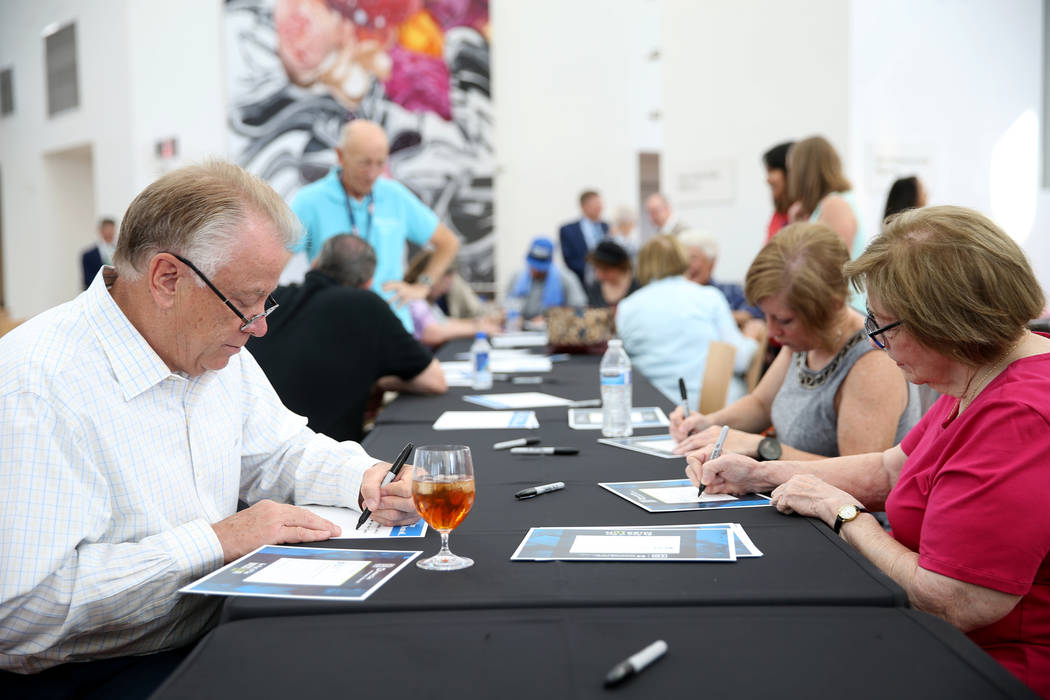 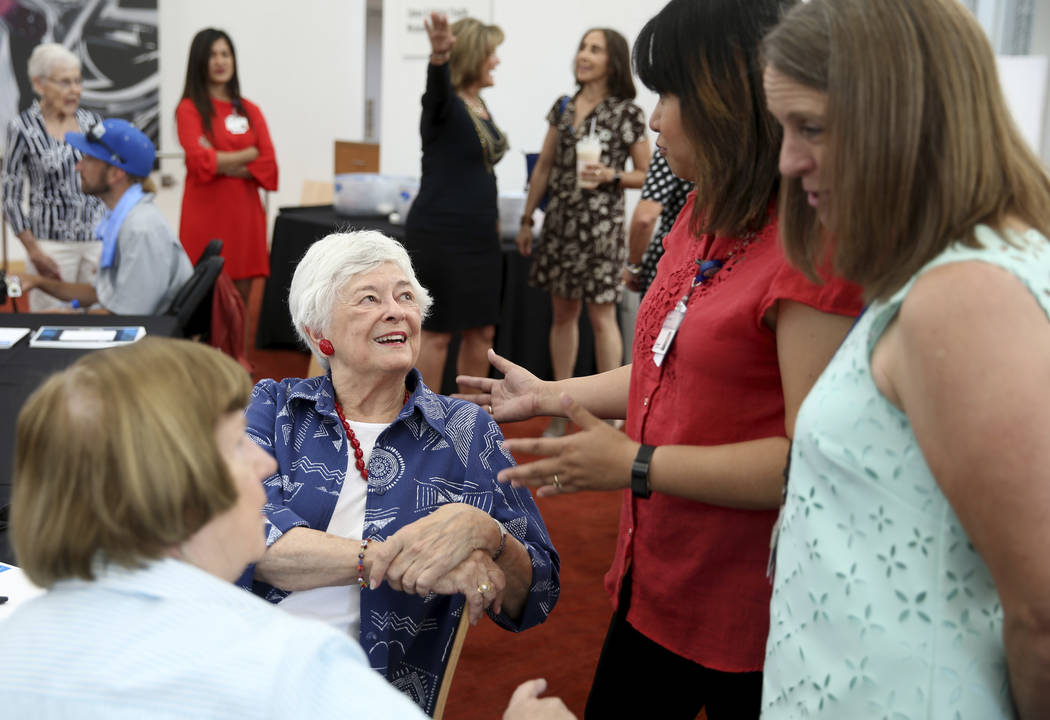 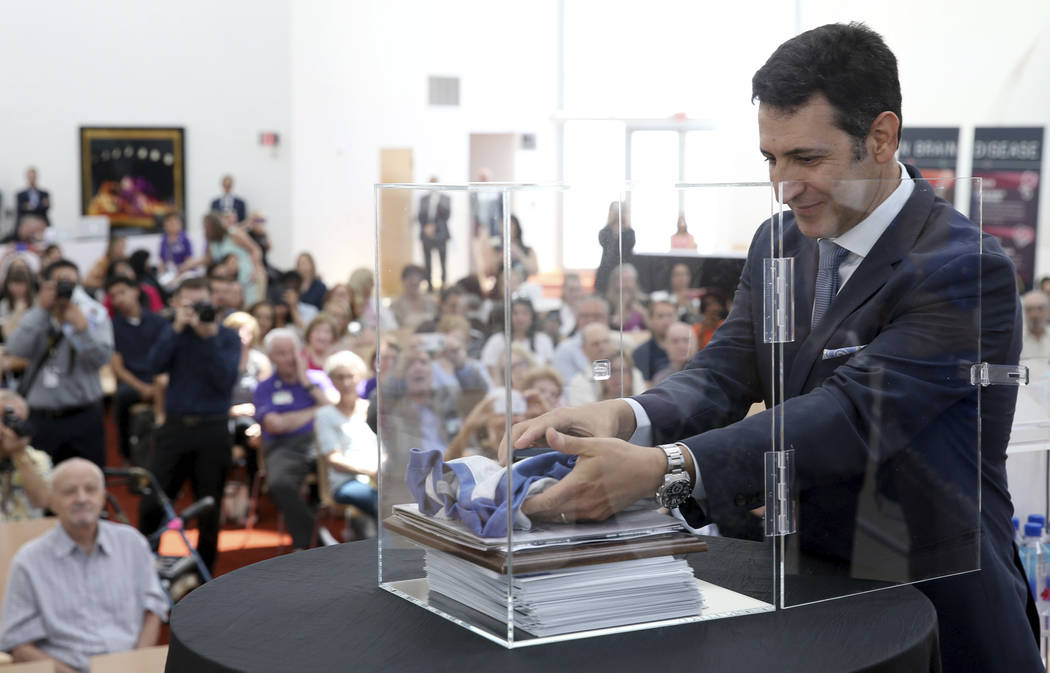 Lined up in the front row were a renowned neurologist, a showgirl, a celebrated former mayor holding his ever-present martini, another showgirl, and the owner of a storied NFL franchise.

Everyone in attendance wrote a note placed in a community time capsule, finishing the sentence, “In 10 years, I hope the clinic will …”

It was a morning of celebration, of course, which yours truly was honored to emcee. Davis further enlivened the scene by delivering a $25,000 donation check along with his own note card. But it was also a time for reflection of the groundbreaking ceremony on Feb. 9, 2007, and also the clinic’s opening for patient care on July 13, 2009.

I well remember the afternoon of the clinic’s opening ceremony, sitting on a concrete bench next to legendary UNLV Runnin’ Rebels coach Jerry Tarkanian. Tark grinned while shading his head with a newspaper while his wife, then-Las Vegas City Councilwoman Lois Tarkanian, helped cut the ceremonial ribbon.

Lois helped push forward the plans forward for the clinic, and coach Tark was eventually treated at facility.

Goodman, too, was reflective, noting his long relationship with Davis’ family. That bond dates to the days when current Las Vegas Mayor Carolyn Goodman worked as a publicity exec at the Riviera in the mid-1960s. In those days, NFL owners — especially the Raiders’ Al Davis — visited Las Vegas as a business getaway.

“In those days, Mark Davis was literally a child, a little red-headed hellion running around the office,” said Goodman, celebrating his 80th birthday at 5 p.m. Thursday on Fremont Street. “Now he’s giving us $25,000 for the Cleveland Clinic. Life has come full circle.”

Criss Angel started the week by closing out his Broadway run. He ended it with a surprise confectionery celebrating his 100th show at Planet Hollywood.

Caesars Entertainment officials sent a cake to Angel on Saturday night, marking performance No. 100 in the Strip theater named for him. He popped what seemed to be champagne, shouting, “How sweet it is! Mindfreak! Our 100th shoooow!” He also gave credit to his crew, “It’s all these incredible, talented people.”

In a city where even opening a large-scale production is a challenge, hitting the century mark is an achievement. Evidently, we’ll soon have an announcement of Angel’s 2020 schedule, and it will be interesting to see if he returns his 9:30 p.m. shows back to his calendar (he announced in April he’s performing only 7 p.m. shows, as he needs to prepare for rotator-cuff surgery on his left shoulder in early 2020).

In New York, Angel’s seven-show performance of “Criss Angel Raw: The Mindfreak Unplugged” at Lunt-Fontanne Theatre for the week ending July 7 reveal that he was able to fill the venue at 91 percent capacity, but at steep discounts. Numbers culled from industry pub BroadwayWorld.com are that Angel’s average ticket price was $49.36, the lowest average price of any of the 57 shows reporting box-office figures in that same seven-day period.

Angel’s was the first Broadway run by a Las Vegas residency headliner since Penn & Teller played Marquis Theater in 2015. The “Mindfreak” star’s financial figures are in line with our previous reporting about “Unplugged’s” sluggish advance sales at Lunt-Fontanne. The show’s total gross of $434,072 was just 31 percent of the theater’s $1.4 million gross potential for Angel’s run, which another statistical measure of a show’s box-office success.

By comparison, “The Illusionists,” the most recent magic-themed production to play Broadway, performed at 84 percent of its gross potential (earning a total gross of nearly $3 million) for the final week of its holiday run ending Dec. 30 at Marquis Theater. That show co-starred current Mirage headliner Shin Lim, the reigning “AGT Champions” champ, and enjoyed name recognition as a familiar holiday title.

But this data doesn’t mean Angel limped out of New York with no positive results. His show’s production costs and advertising budget might have been low enough to absorb lackluster ticket revenues (efforts to contact Angel’s reps for comment during the week were unsuccessful). His talented “Unplugged” support cast doubtless benefits from adding a Broadway run to its resume.

And, even though Angel’s reviews were tepid or even non-existent (he didn’t invite New York media to his “Unplugged” opening night, which is customary for Broadway shows), his social media posts show a theater filled with adoring fans. It looked like quite the festival for a guy from Long Island who has hit the big time.

No doubt, Angel has prospered a headlining illusionist for a long time. He knows how to frame any experience — including his week on Broadway — as a success. Whether his box-office performance merits another visit remains to be seen.

This just in. Emma Taylor and I talk about her meeting with Jeffrey Epstein. Feel free to re-post

“I had the best day ever!” Fator says as the Emma character. “I got to fly on a private plane with a bunch of other 12-year-old girls and a bunch of famous Democrats!” (Fator said the reference to Democrats was based on comments from Christine Pelosi that some powerful Dems might be implicated in the Epstein investigation).

The routine continues, with Emma saying, “It’s all perfectly innocent. He’s just going to give me a makeover, do my makeup and hair and nails and stuff. He said he was going to be grooming me.” The minutelong bit ends with the childlike puppet saying Epstein “has done a lot for the coal industry — he told me how he loves miners.”

In his own voice, Fator closes with, “OK, Emma, go to your room and stay there until you’re 30.” After a pause, Fator returns to the clip and says, “The preceding was a comedy routine, and everyone is innocent until proven guilty.” (See all of this on the @TerryFator Instagram page.

In a follow-up text, Fator explained, “When I’m outraged at something or someone, I use the platform I’ve been given to make a point. In this case it’s to point this horrible man’s evil.” He added that he did not want his audience to be confused about the subject. “Epstein was the target.”

No VGK for Holzhauer

“Jeopardy James” Holzhauer wants to sport a Vegas Golden Knights jersey or related merchandise when he returns to the show for its Tournament of Champions from Nov. 4-15. Responding to a tweet saying, “Make sure to rock your Knights sweater,” Holzhauer said, “Specifically banned by the show. (Would not be the first rule I’ve broken, though!) Lawyers gonna lawyer.” He didn’t specify the rule-breaking comment, but the game show does not permit licensed apparel, an exception during its College Champion tournament.

Dollface, the all-female rock band fronted by Glo Vivelo, is at Roxy’s at Sam’s Town from 9 p.m.-2 a.m. Saturday, and at Rush Lounge at Golden Nugget from 9 p.m.-1 a.m. July 21. The energy is palpable. Admission is free.

You guys, guess what??? 🤗 Coming to the stage near you December 2019! 💗💗💗💗💗💗💗💗💗💗💗 Soooo excited to finally announce that we are expecting our baby girl end of this year! A huge thank you to @backstagebarandbilliards for letting us take over their marquee, & @702_sonny & Angela for capturing this special moment. ❤️ #babygirl2019 #expecting #jaimelynch #vegasbaby

Brad Garrett is still looking for a 10 p.m. show in his Brad Garrett’s Comedy Club at MGM Grand. That slot has been vacant since The Naked Magicians closed last month … Asked if he and his fiance, IsaBeall Quella, have set a wedding date, Garrett said, “I think we’re gonna elope in the spring.” That’s a joke, likely … “Princess Wendy’s Late Night Tease Room” is back at Nerd Bar at Neonopolis, Fridays and Saturdays, beginning this Friday and running through Aug.31. The burlesque-fashioned, adult comedy show starts at 10 p.m. … Vocalist Jaime Lynch of Zowie Bowie and her beau, Aaron Habig, announced they are expecting a baby girl in December. The couple made the announcement on the marquee at Backstage Bar & Billiards on Fremont Street … Bronx Wanderers added “Hey Jude” to the set list at Mat Franco Theater at Linq Hotel when Paul McCartney was at T-Mobile Arena for two dates this month; the song stays, with another couple being added this summer.