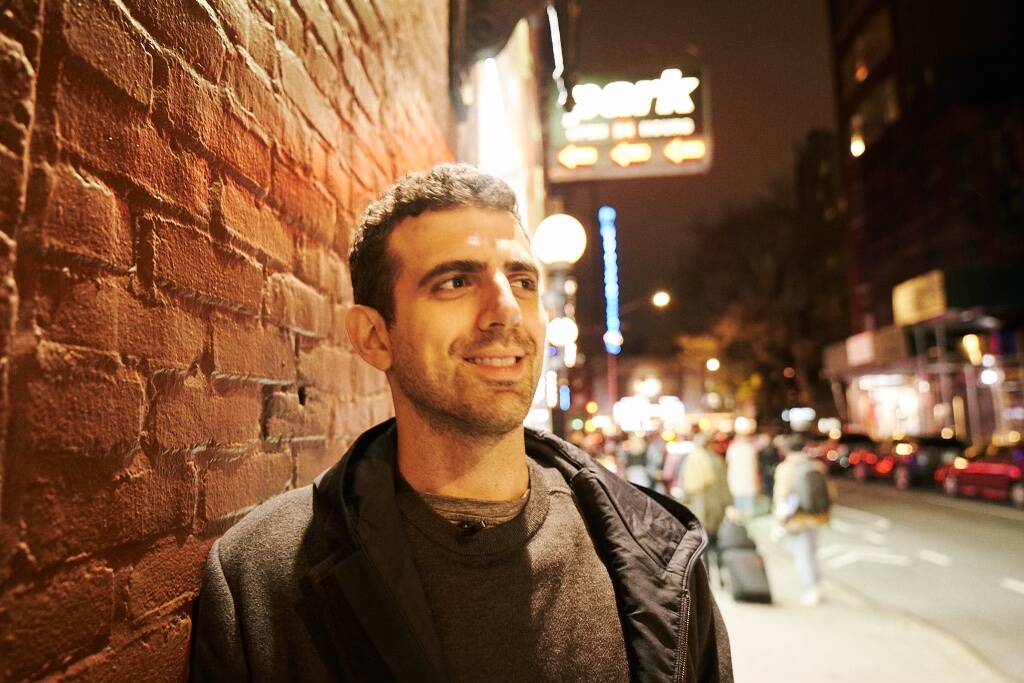 Sam Morril performed a series of rooftop shows during the pandemic shutdown. Now he's in headlining major theaters on the Strip. (Loshak PR)

This edition of the Kats Comedy Hut opens on the roofs of New York, and graduates to a theater on the Strip:

Top of the bill

We have heard of comics seeking stage time to keep sharp and develop material. Sam Morril, debuting at Mirage Theater on Friday and Saturday, has taken that concept a step further … And several flights higher.

During the pandemic shutdown, Morril performed when no clubs were open, atop apartment buildings in New York City, over a six-week period. The culmination was the “Up On The Roof” special, posted to Morril’s YouTube page in November 2020. The 45-minute highlight clip of those shows has drawn more than 2 million views.

“That was good for me. In some was it probably saved me, mentally,” says Morril, who often climbed ladders illegally for these pop-ups. “You’ve made something out of nothing. All I really need is a microphone, right? You don’t really need much to do this.”

Morril was doing formal shows in temporary venues (tented and otherwise) in a quest for stage time.

“I was performing in places that weren’t made for comedy,” he says. “It’s funny, when you start as a brand-new comic, you’ll do anything for stage time. COVID brought that back. Stage time became finite. So eventually I was like, hey, find a rood and an amp, get some beer and wine and some friends and I’ll come by.”

“I didn’t realize how big of a deal this was until I was talking to Estee, and when I told her I was playing the Mirage she was like, ‘Wow,’ and the way she looked a me was kind of like, maybe this is a big deal (laughs),” Morril says. “She goes, ‘That’s where Ray Romano plays,’ and I go, ‘Oohh, OK, OK.’ I just don’t know the rooms of Vegas.”

Morril co-hosts the “Games With Names” podcast with former Patriots receiver Julian Edelman. The comedian says the show needed someone who could be reliably funny, while knowing something about sports. Guests have been such prominent sports figures as Eli Manning, Tedy Bruschi, Peyton Manning, Paul Pierce and Michael Irvin. And Morril’s latest comedy special, “Same Time Tomorrow,” is streaming on Netflix.

For Morril, the battle back from the pandemic was a humbling exercise.

“My career had been in the toilet for so long but I had come a long way in the last many, many years,” the comic said. “To go backward, again, was very humbling. It’s a reminder that this show could go away at any moment, and you really have to seize the day.”

David Spade and Nikki Glaser appear together for the first time in Las Vegas for four weekends at The Venetian Theatre, April 28-29, June 30-July 1, Sept. 29-30 and Nov. 17-18. Tickets are onsale 10 a.m. Thursday (Pacific time) at Ticketmaster.com and VenetianLasVegas.com. Both Spade and Glaser have appeared, separately, at Aces of Comedy at Mirage Theater, the latest headliners to move off that series.

Incoming Hard Rock Las Vegas execs say Aces will continue this year. The series’ future in 2024 and beyond has not been determined.

Sister (in the) act

Jill Kimmel is back as a headliner on the Strip. She selected the right venue, her brother Jimmy Kimmel’s Comedy Club. Kimmel performs 9:30 Feb. 2. “SNL” alum Chris Kattan premieres at the club Feb. 9-Feb.12. Comic magician Farrell Dillon holds the 4:30 p.m. slot Thursdays through Sundays, with Vickie Barbolak at 7:30 p..m. and Luenell at 9:30 Sundays.

Many comics are otherwise rotating in and out of the venue at Linq Promenade. We now only dimly recall being concerned about JKCC reopening.

The new “Stand Up & Rock” and “Byron Kennedy and Friends” comedy shows are purring along at Oyo hotel-casino. One day we won’t feel the need to remind folks that used to be Night Owl Showroom at Hooters, but this is not that day.

Producer Joaquin Trujillo’s vision is to blend comedy with live music, as Kennedy is under contract with BMG Nashville, the first comic to sign a deal with that label. BMG country singer/songwriter Jordan Harvey appeared at Friday’s media night. The emerging artist out of Scotland a force. Every tune felt like a radio hit.

Up next is the live telecast of Laugh After Dark series on Prime Video. The series previously performed at Notoriety Live and opens, or Oyo-pens, Feb. 19.