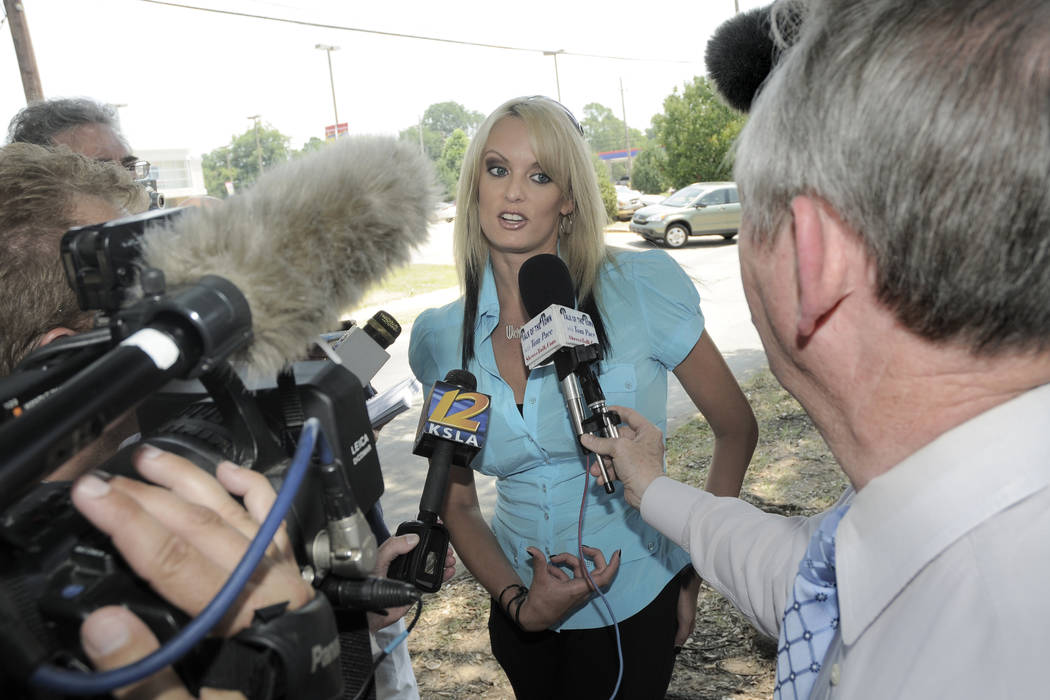 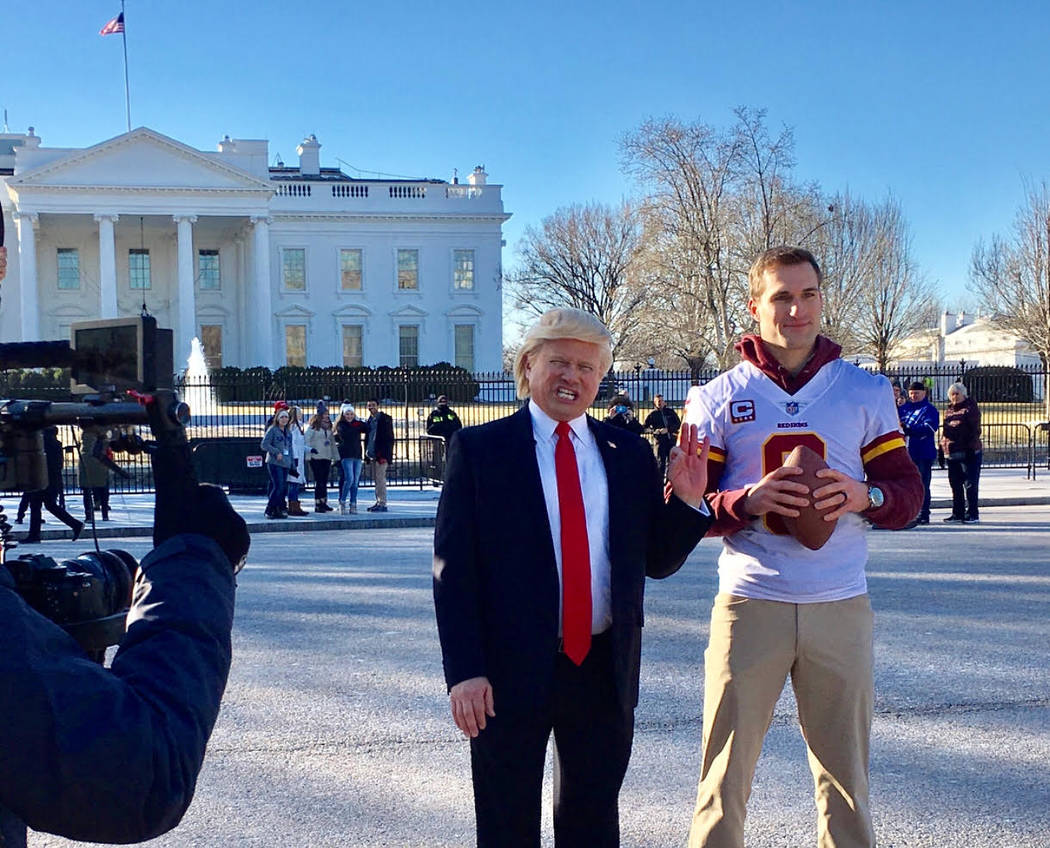 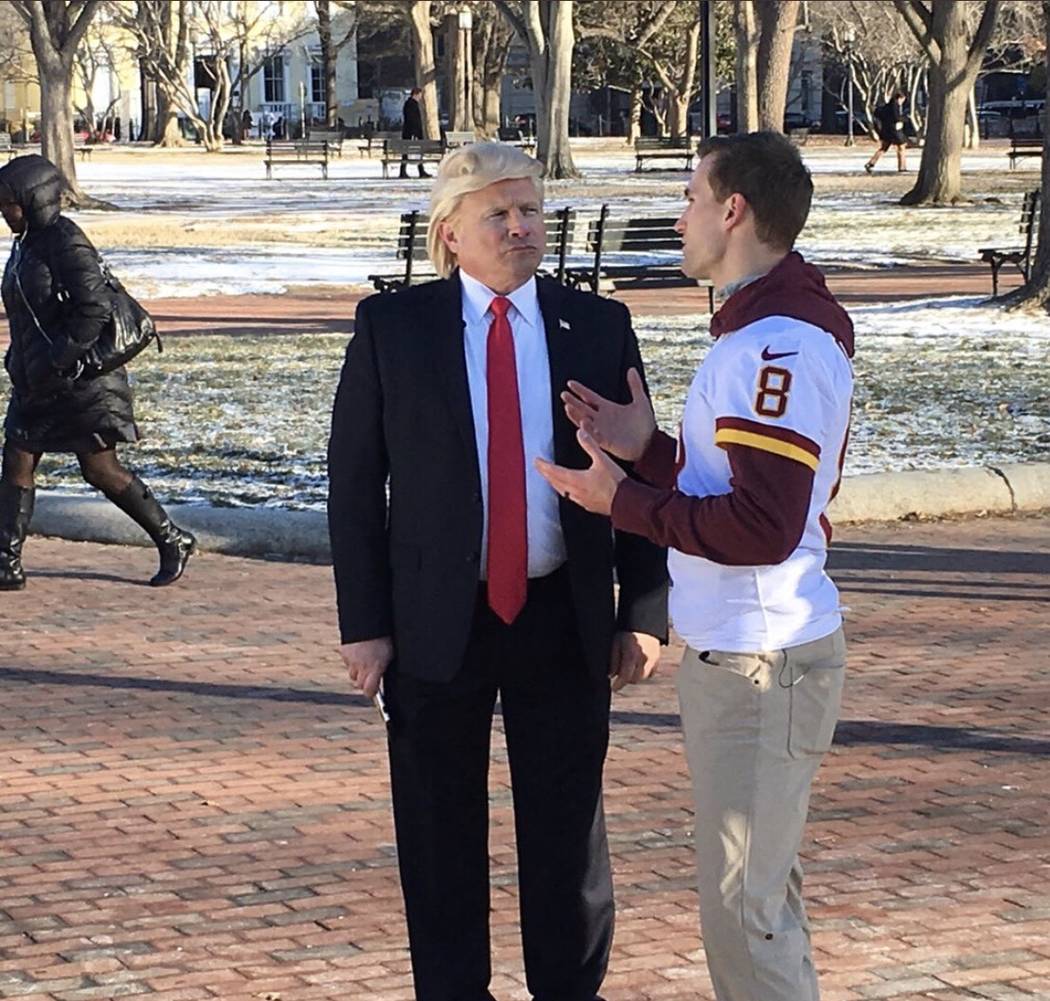 John Di Domenico of Las Vegas, a top Donald Trump impressionist, is shown with Redskins quarterback Kirk Cousins at the White House on Thursday, Jan. 18, 2018. The two were shooting a commercial for gasfireplaces.com to air during the Suoer Bowl on Feb. 4. (Indira Guerrero) 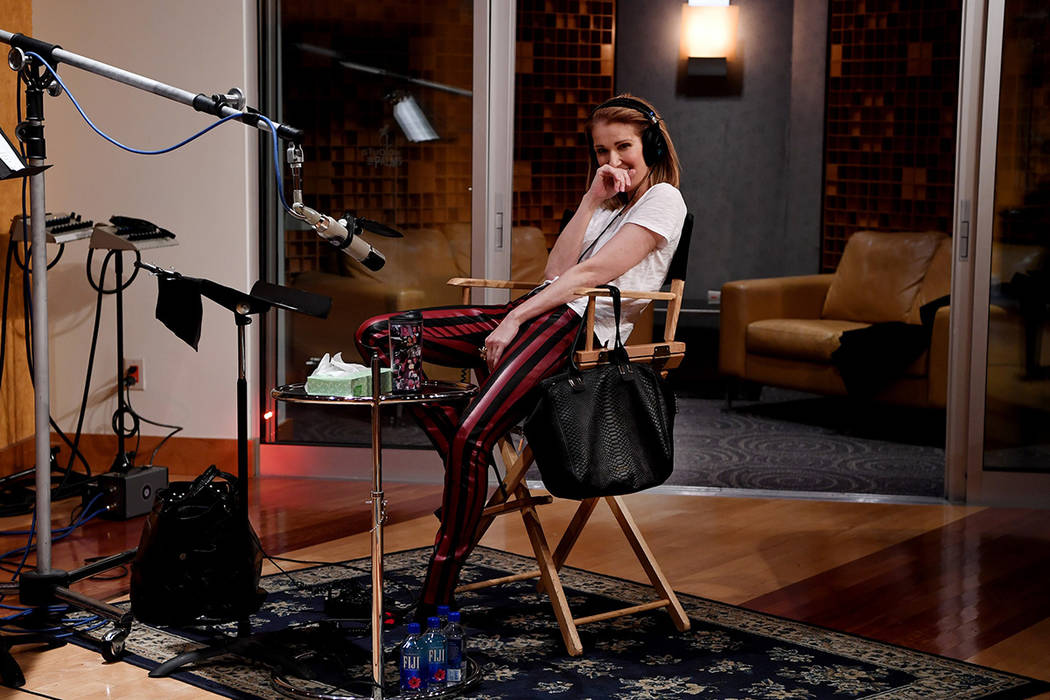 Celine Dion is shown during a break at The Studio at the Palms, where she has been working on her upcoming album, on Wednesday, Dec. 6, 2017. (Denise Truscello) 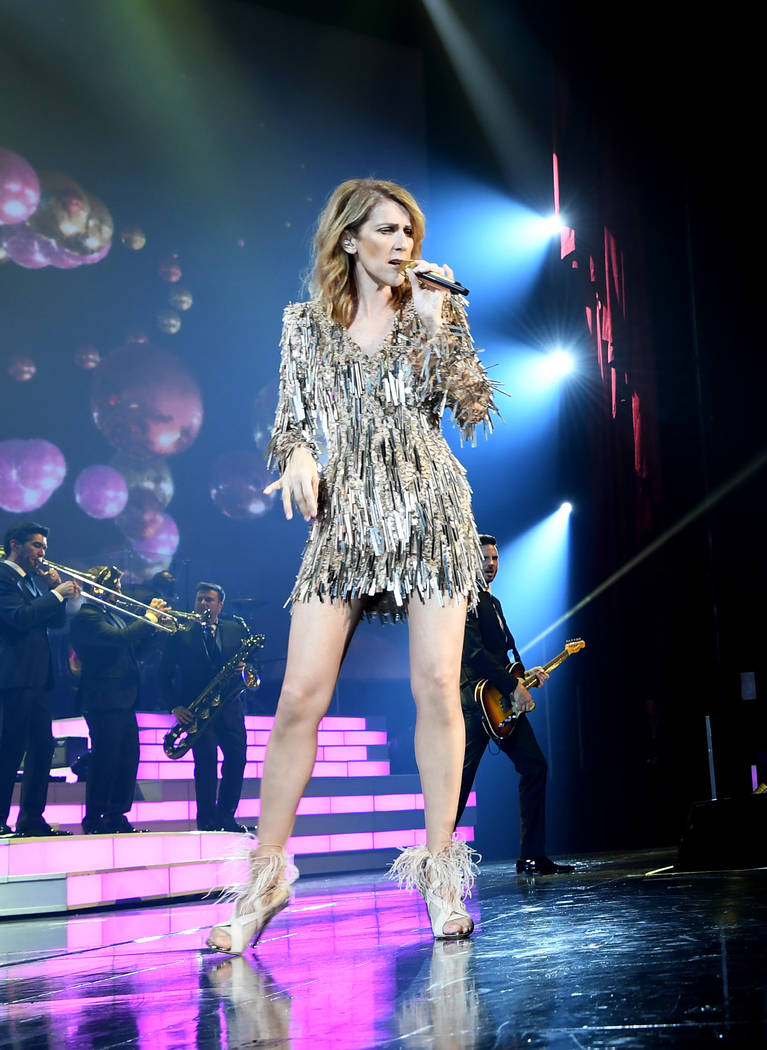 Say this for Stormy Daniels. She picked the right stage name.

The adult-film star, who has created a veritable hurricane of press coverage over the past week, is expected to be in Las Vegas next week for the Adult Entertainment Expo. The event runs Wednesday through Jan. 27 at Hard Rock Hotel.

Daniels, whose real name is Stephanie Clifford, is nominated for three awards — recognized for performance, screenplay and directing — in the annual AEE Adult Video News awards show. Otherwise, what she’ll be doing, with whom and when, is still to be determined.

“I am awaiting word on what Stormy plans to do during the Expo, if anything,” said Brian Gross, lead publicist of the event. “To call her a hot topic is putting it mildly.”

Daniels has attended several AEE Expos, and has been a regular red-carpet interview subject. She has won a host of AVN awards since debuting in adult films in 2004, including Director of the Year in 2016 and the Positive Image Award in 2009.

Ongoing health concerns forced Celine Dion to cancel all of her scheduled performances this week at the Colosseum at Caesars Palace. Shows set for Tuesday, Wednesday, Friday and Saturday were all wiped out.

Dion herself notified her fans of the canceled shows via social media. According to a news release from Caesars Palace and concert promoter AEG Presents, Dion has been suffering from congestion and irritation of the vocal chords caused by a lingering cold. Her physician has ordered her off the stage until she fully recovers.

Dion’s next show at the Colosseum is March 27.

John Di Domenico, one of the country’s foremost President Trump impressionists, has finally made it to the White House.

Which is to say, he recorded a TV commercial outside the White House.

On Thursday, Di Domenico was joined by Washington Redskins quarterback Kirk Cousins in a spot for a gas-fireplace company. The temperature dropped to 21 degrees as Di Domenico and Cousins drew a crowd outside the fence facing 1600 Pennsylvania Ave.

The spots will air locally in D.C. at the beginning of the third quarter of the Super Bowl. As Di Domenico says, “We’re hoping for one very special viewer.”

The Sunday, a weekly news magazine launched in February 2014 by Greenspun Media Group, has folded. A half-dozen great journalists, and great individuals, were notified Friday afternoon of the pub’s demise.

One of those who lost her job, the talented reporter April Corbin, posted on her Facebook page: “I was just laid off. Someone hire me.”

Samuel Goodman is no ordinary 14-year-old. The eighth-grade student at Hyde Park Middle School is among the smartest kids of his age, or any age, in the world.

Last weekend, Goodman beat a field of 9,000 entrants to win the “Who Wants to Be a Mathematician” competition in San Diego. The international contest pitted math experts of all ages attempting to solve college-level equations.

Goodman is the youngest participant to ever win the championship.

Goodman, who has taken calculus since the fourth grade, also boasts impressive DNA. His father, Oscar Goodman Jr., is a Las Vegas oncologist. His mother, Ana Goodman, is a physical therapist. And his grandparents, Carolyn and Oscar Goodman, are the current and former mayors of Las Vegas.

The Mob Museum opens its new underground attraction, aptly dubbed The Underground, on April 19. The permanent exhibition dedicated to the Prohibition era is to feature an operating distillery, with a vintage still being shipped in from Germany to make vintage moonshine.

Of particular interest is The Underground’s speakeasy, with its plans for 1920s-styled entertainment. We can never have enough live entertainment in this city, above or below the ground.

The Cannery seems to have lined up much of the SiriusXM Classic Rewind play list.

Tickets start at $15; I’m reliably told that these bands are a lot of fun for those of us who remember Maxell metal cassette tapes.

And, a longtime Vegas R&B vocal group Next Movement perform a special Valentine’s Day show, on that day. Tickets start at $20.

Note: This version of the column corrects the opening date of The Underground at The Mob Museum.