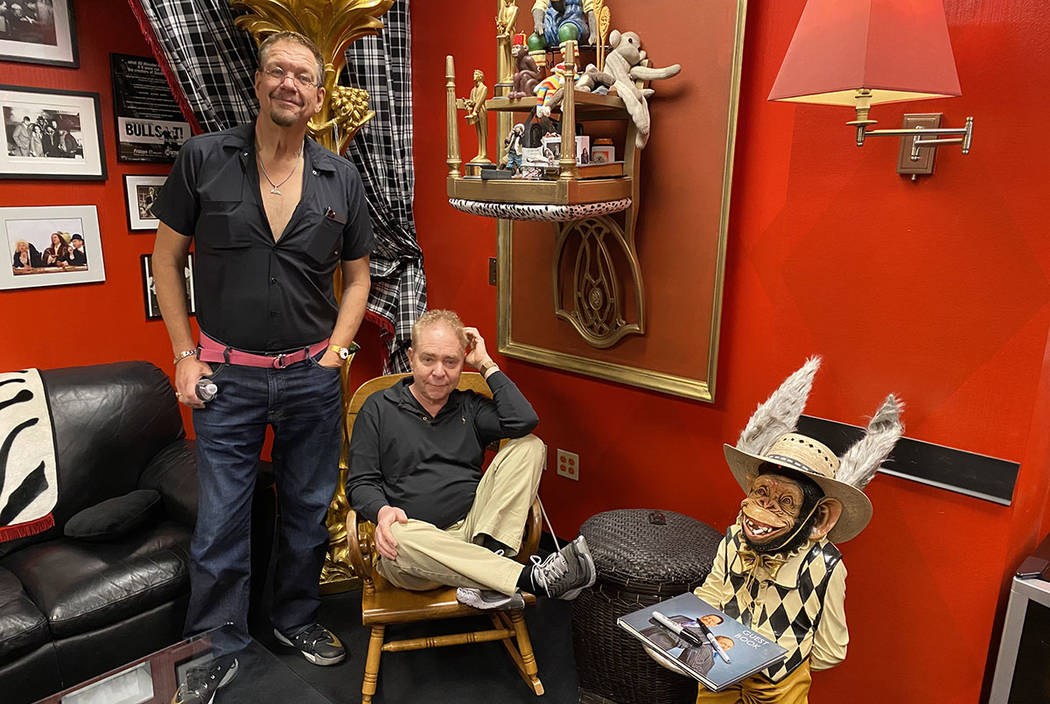 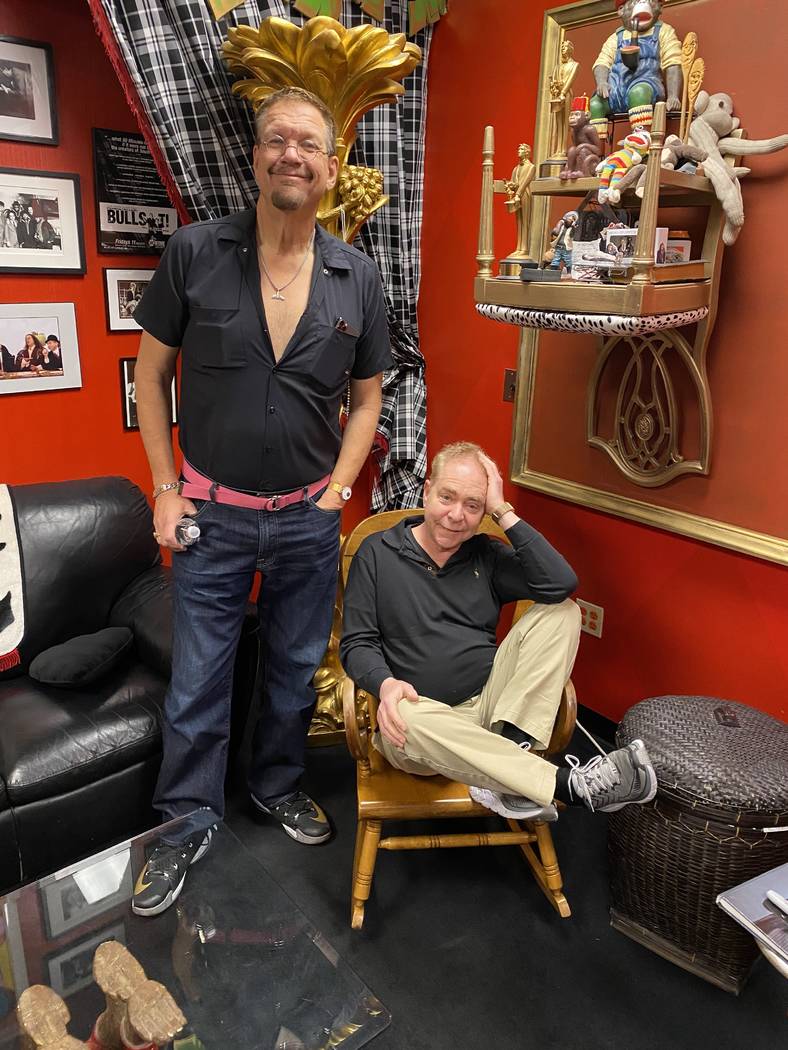 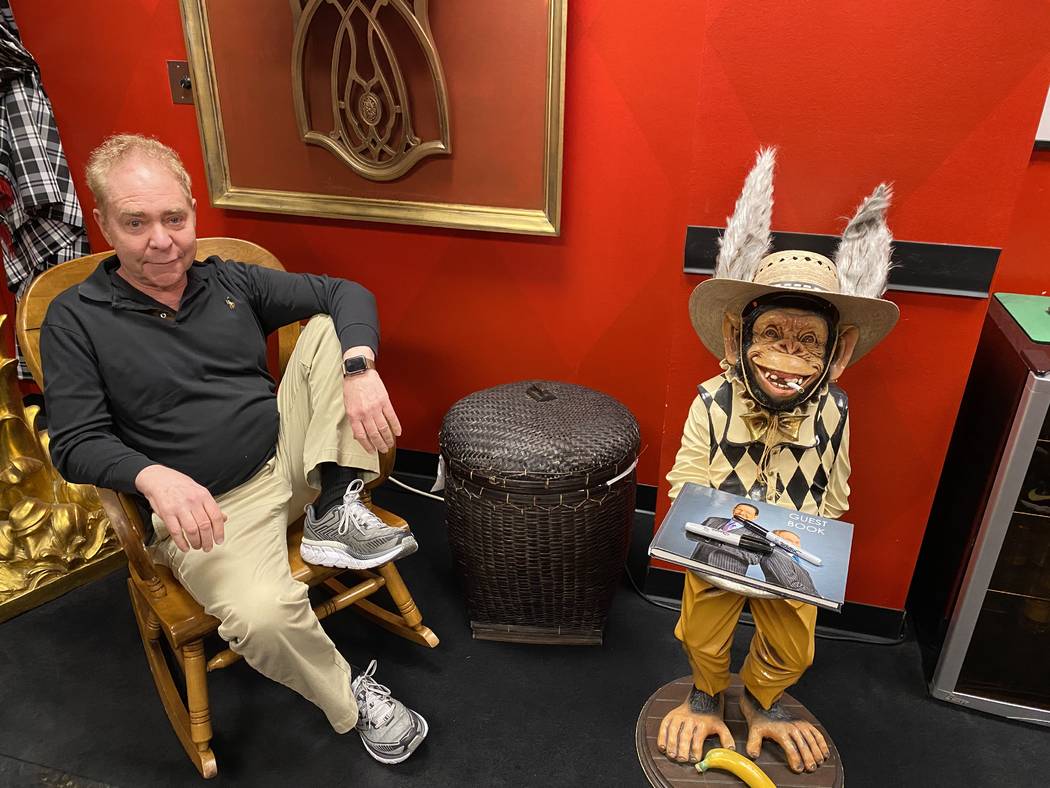 Teller is shown in the Monkey Room at the Rio on Tuesday, Feb. 25, 2020. (John Katsilometes/Las Vegas Review-Journal) @JohnnyKats

If you’re a repeat visitor to Penn & Teller’s Monkey Room, you become accustomed to its nuanced decor. For instance, we were reminded last week the many monkeys in the room have cigarettes dangling from their mouths.

Penn & Teller placed them there when moving into the space almost 19 years ago. It’s just the right touch.

Those cigarettes have never been lit, of course. But the monkeys have become mascots of a sort for the longtime Las Vegas headliners, and the duo uses the Monkey Room at the Rio as a haven for meeting guests and hanging with friends.

The scenery does change, though. Unfamiliar in previous visits is a wooden rocking chair, new to the room but old in fact.

I ask Teller if the chair is where he relaxes, to rest his back, which has been operated on three times in the past 18 months.

No. Instead, that rocking chair, which Teller brought from his home, is a prop in a new segment in the Penn & Teller show.

“We are doing an age-appropriate escape,” says Teller, who turned 72 on Valentine’s Day while Jillette is 64. ”We thought about what it would be, and originally we thought of escaping in La-Z-Boys, but they were too complex and mechanical. One day I said, ‘Penn! How about rocking chairs!’ and he said, ‘That’s it!’ We have a whole routine where we rock ourselves facing opposite directions, and one of us reaches back with a cane and pulls the other forward … there is mutual help in the escape.”

So look for the Age Appropriate Escape this spring.

Last week, in Teller’s first interview since he resumed performing, the illusionist, author, film director and actor said he is finally returning to full health after undergoing extensive surgeries on his back.

It was uncharted territory for the duo. For the first time in the headlining duo’s 45-year partnership, Jillette headlined ticketed performances without Teller. Jillette instead appeared with his entertainer buddies Mac King, Piff the Magic Dragon and Matt Donnelly in a rotating “Penn & Friends” series. Teller returned full-time on Feb. 1.

Penn & Teller used the downtime to create. Though a showbiz cliche for many headliners, P&T’s show is ever-evolving.

“One of the things that was sort of wonderful about the recovery period was that Penn would come over and we’d write stuff,” says Teller, who is famously silent onstage. “My favorite thing, bar nothing, is writing new stuff. Creative collaboration. That is my idea of the best time in the world, making an artistic discovery and working on it.”

“Some people might want to go to Disney World. I want to work with Penn.”

The duo remains as immersed as ever in their craft. They record the seventh season of their CW series “Fool Us” over eight days this month at the Rio, beginning Wednesday. They tour Australia in April, eight shows at Sydney’s Capitol Theatre that were rescheduled from January after Teller was sidelined.

Central to this heavy work schedule is Teller’s ongoing recovery. Suffice to say undergoing three spinal-fusion surgeries inside of two years was not in his original health plan. His back problems were “bequeathed,” Teller says, from his father.

“It was just multiple places where there were problems in the spine,” Teller says. “You discover them, one by one, fix the one that is the worst and when time passes, there were a couple of other places as well.”

He adds, grinning, “I have significant evidence that I’ll be good for at least another couple of years.”

Teller’s time away from the act did force the P&T empire to consider what might happen when the ampersand is gone. Jillette has said he was initially “scared to death” to work without Teller in the “Penn & Friends” shows.

Teller is asked what sort of legacy he and Jillette want to leave when they finally do halt the show.

There is a lengthy pause before he offers, “I want to make it to at last 50 years with Penn, because I like round numbers. Then when we get to 50 years, I’ll say, ‘Let’s get to 52,’ because that’s the number of cards in a deck. Then let’s get to 54, because that’s the two extra jokers (laughs). We need some advertising cards in there, so add a couple more … that’s how I am.”

But retirement is not in the cards for this magician.

“You know, I obviously want to do this until I drop dead onstage,” Teller says, nodding his own approval. “I want to go out that way. I mean, I really do.”