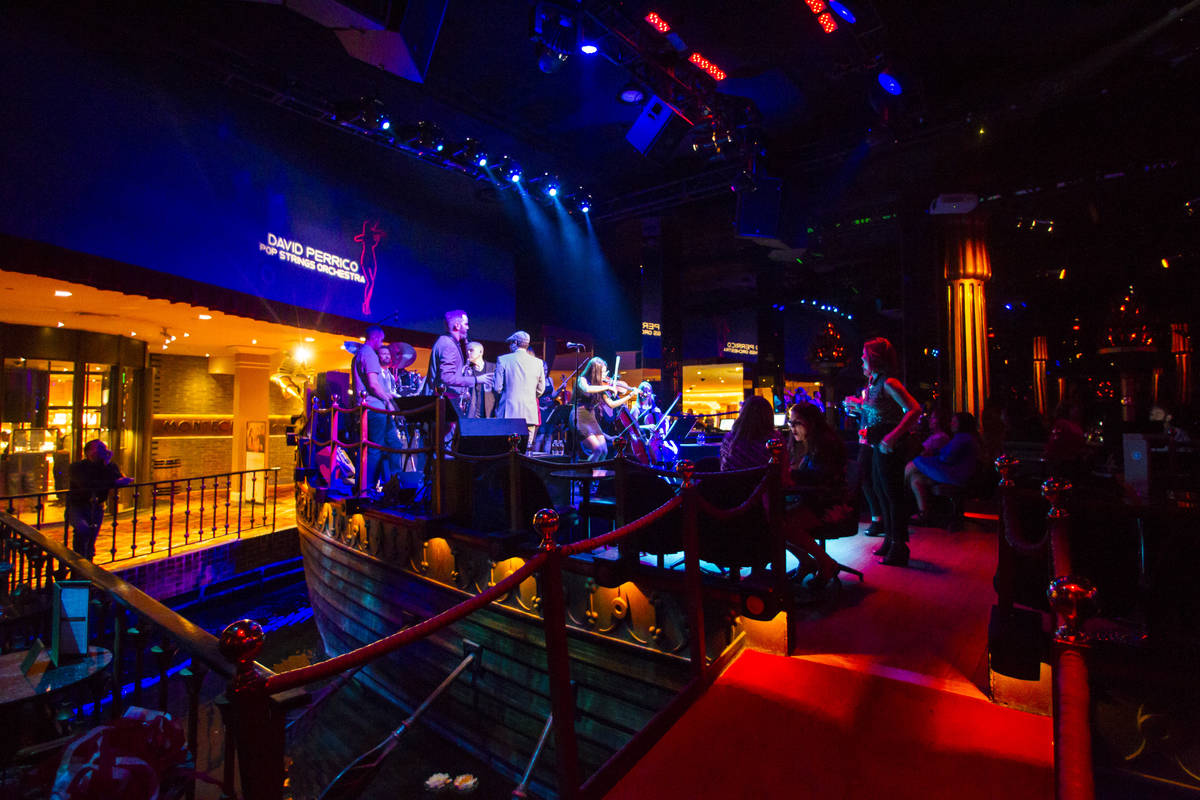 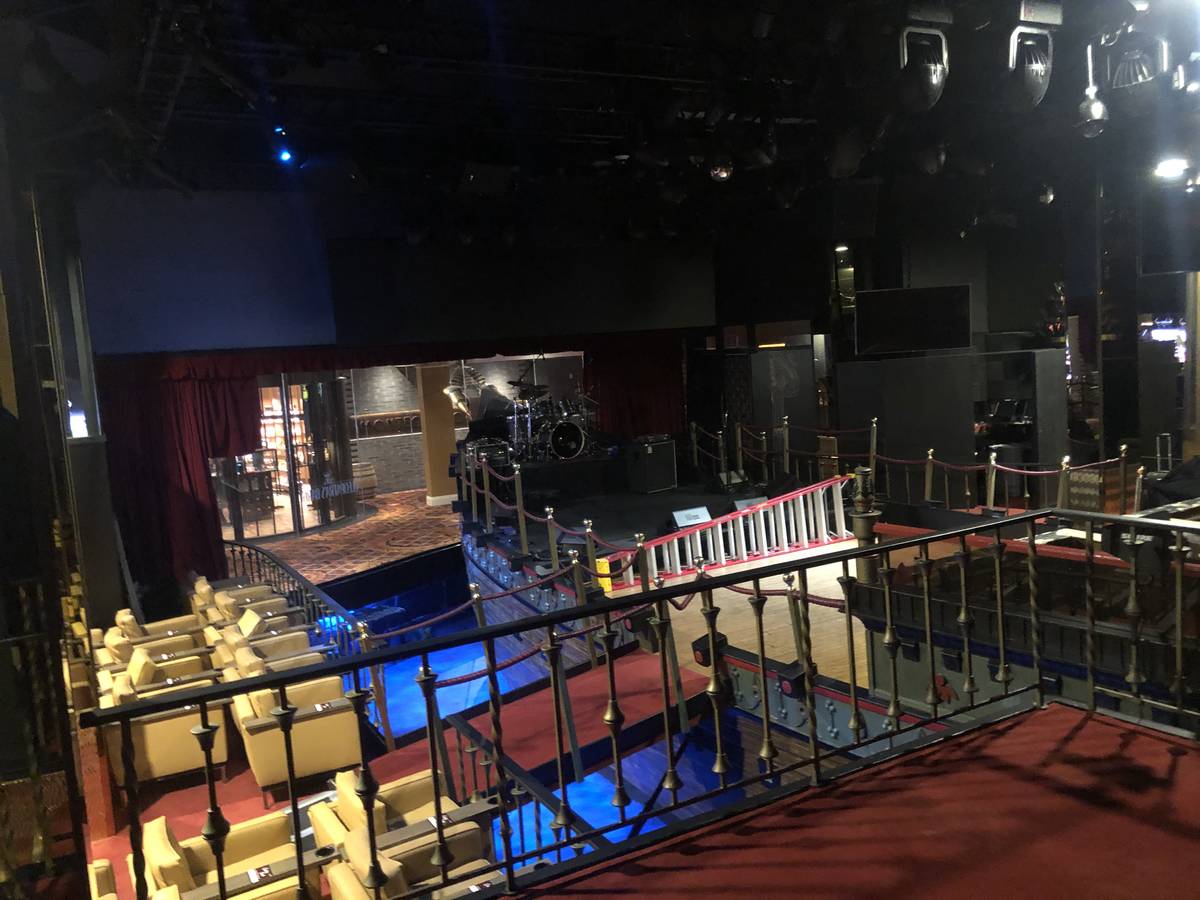 A look at the shuttered Cleopatra's Barge at Caesars Palace on Monday, Sept. 21, 2020. (David Perrico) 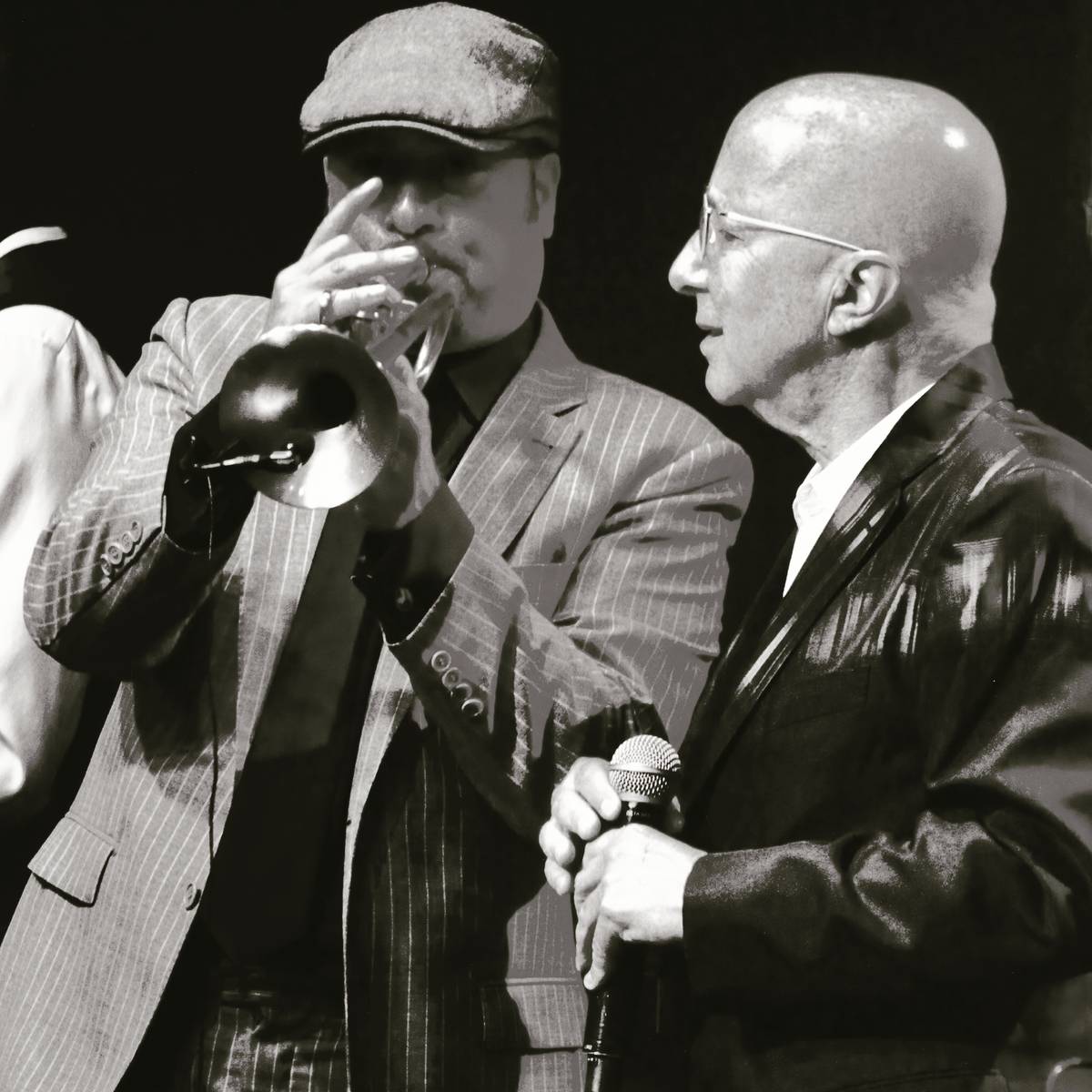 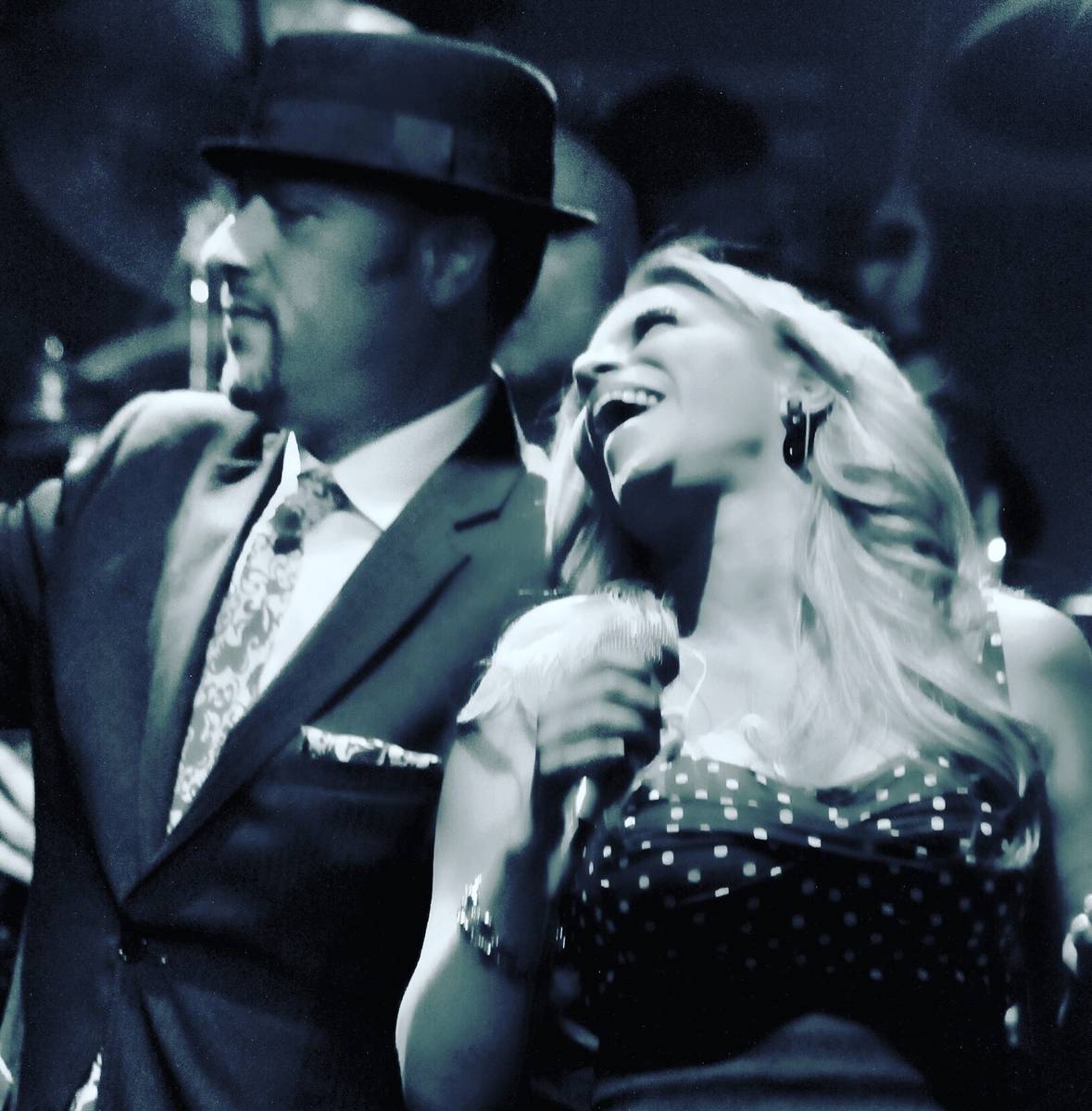 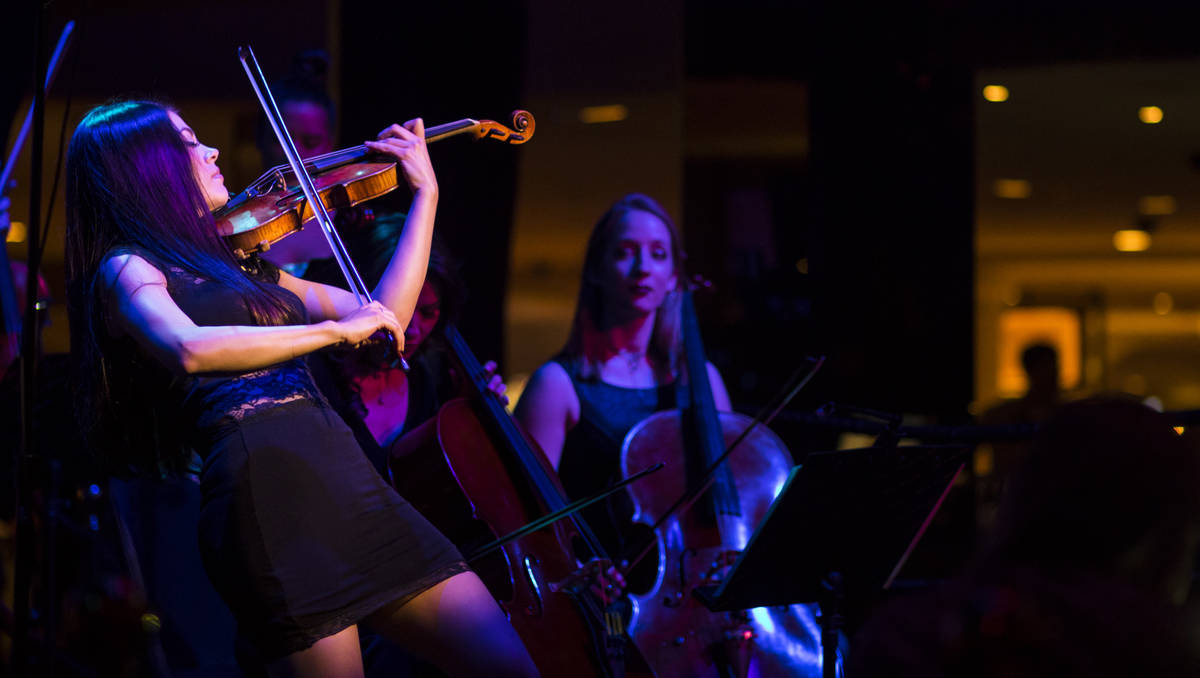 Note: Today’s column kicks off a series — “Surviving Shutdown” — examining the effect of COVID-19 on the Las Vegas entertainment industry.

The trumpet virtuoso and veteran bandleader can also count the four components needed for entertainment to reopen in the city: conventions, corporate events, lounges and showrooms.

“Without those, Vegas really isn’t open,” Perrico said in a phone chat Saturday. “The city isn’t open right now, at least not how it’s being portrayed.”

There is no word from either property about when a 14-piece band can return to the stage, even ambiently.

Perrico was also forced to shelve a half-dozen dates at Myron’s Cabaret Jazz at The Smith Center, where Pop Strings is a lock to sell out.

Takes some equipment out

The musician and small-business operator finally pulled some of his equipment out of Cleopatra’s Barge last Monday and has retrieved property from Westgate.

He can’t guarantee he’ll be back, either.

Perrico’s Instagram post, with video and photos of the empty room, raised some eyebrows around town. Perrico said in that post and again on the phone he has not had a serious conversation with Caesars Entertainment about his band’s status in about seven months.

“I am not looking for pity. I am showing that this is what the state of entertainment is in Las Vegas,” Perrico said. “I speak for a lot of entertainers who are frustrated and who are trying to get information to deal with this.”

He isn’t alone, of course. Verifiable intel from even the top entertainment officials is scarce in the often-erratic pandemic reopening.

Currently, Perrico presides over four bands in his “Pop” empire: His Pop Strings ensemble, the new Pop Soul trio, Pop Retro and Pop 40. Pop Soul is to work into the latest trend of background music currently allowed in Vegas bars and restaurants.

But Perrico represents a meter of modern-day Vegas show business. His extensive experience in this city is undeniable.

Perrico has headlined several on- and off-Strip venues, including the Rocks Lounge at Red Rock Resort, the old Lounge at the Palms, South Point Showroom, The Strat (then Stratosphere) Showroom, The Smith Center, Caesars and Westgate. Reaching back, he fronted Zowie Bowie’s vintage-Vegas band at the Monte Carlo and the shuttered Ovation at Green Valley Ranch Resort. He was bandleader for Paul Shaffer at the Barge, for the production “Pin Up” at The Strat, “Alice” at various venues, and was a jazz music professor at UNLV for six years ending in 2011.

Lest we forget, Perrico was a backing player at The Act at The Venetian’s Grand Canal Shoppes (where he was once asked by Act partner/producer Simon Hammerstein to play a note as if the trumpet were coming down from a cocaine binge). Perrico was also a costumed musician in “Viva Elvis” at Aria, so he has Cirque experience, too.

Even with his vast experience in town, Perrico’s career is built on the shows you might never see. He has a coveted corporate- and private-gig operation, estimating that 75 percent of his business is from shows not open to the public. In Las Vegas, the system is symbiotic, as fans who have waded into Pop Strings’ late-night shows at the Barge for the past four years were eager to book the band for private shows.

Westgate, too, with its convention business, was leading to additional corporate bookings before the shutdown.

“The lounges at Caesars and Westgate has allowed people to see is, and want to book us, and that has given us steady work on the corporate side,” Perrico said. “It generates a lot of awareness for musicians in Las Vegas, and we help drive convention business in this city.”

Overall, Perrico has hired 45 “gig” workers whose workload is equal (at least) to a full-time job. The number blooms to 77 overall when you add the musicians Perrico has hired for select performances. These are the 1099 tax filers largely left in the dark through the state’s unemployment-insurance process.

“Those musicians are all out of work,” Perrico said, “and that’s just in my own little world.”

Perrico has been able to sustain many out-of-work musicians through the federal government’s Paycheck Protection Program (PPP) loan. He’s offered some work through studio recording and promotional videos. But those projects are nothing close to the type of work he can provide when the engine is at full steam.

“We have had PPP help, but it’s a one-off payment,” Perrico said. “It’s not meant to last indefinitely. It’s to help sustain us until we can go back to work.”

As a businessman and musician, Perrico had grown mentally spent of receiving email messages from fans who had seen Pop Strings at the Barge.

“They had seen that Caesars was open, and saying, ‘I can’t wait to see you Oct. 3!’ or whenever,” Perrico said. “It’s sad that I have to explain to them that we are not playing.”

Those overtures finally led him to shoot video and stills inside his now-former venue. “There has been a lot of response,” Perrico said. “I think it’s starting to hit people just how long this has gone on.”

Perrico’s most recent show was March 14 at Westgate. His band hasn’t played Caesars since the last weekend in February. The Barge might well move to a full-time, ticketed venue when reopening. With its tight design, packed at 165 capacity, the venue presents unique social distance challenges.

Customarily, Perrico is prepared for most any outcome. Aside from Pop Soul, he’s mapped a new project, Queen Strings. This is a nine-piece ensemble featuring four violins, with Arce again at the front, unspooling Queen classics.

“The concept is a tight, 75-minute show,” Perrico said. “A real show. I think it will do well.” It sounds like a good fit for a corporate, private, lounge or showroom gig, for whenever this town opens up.