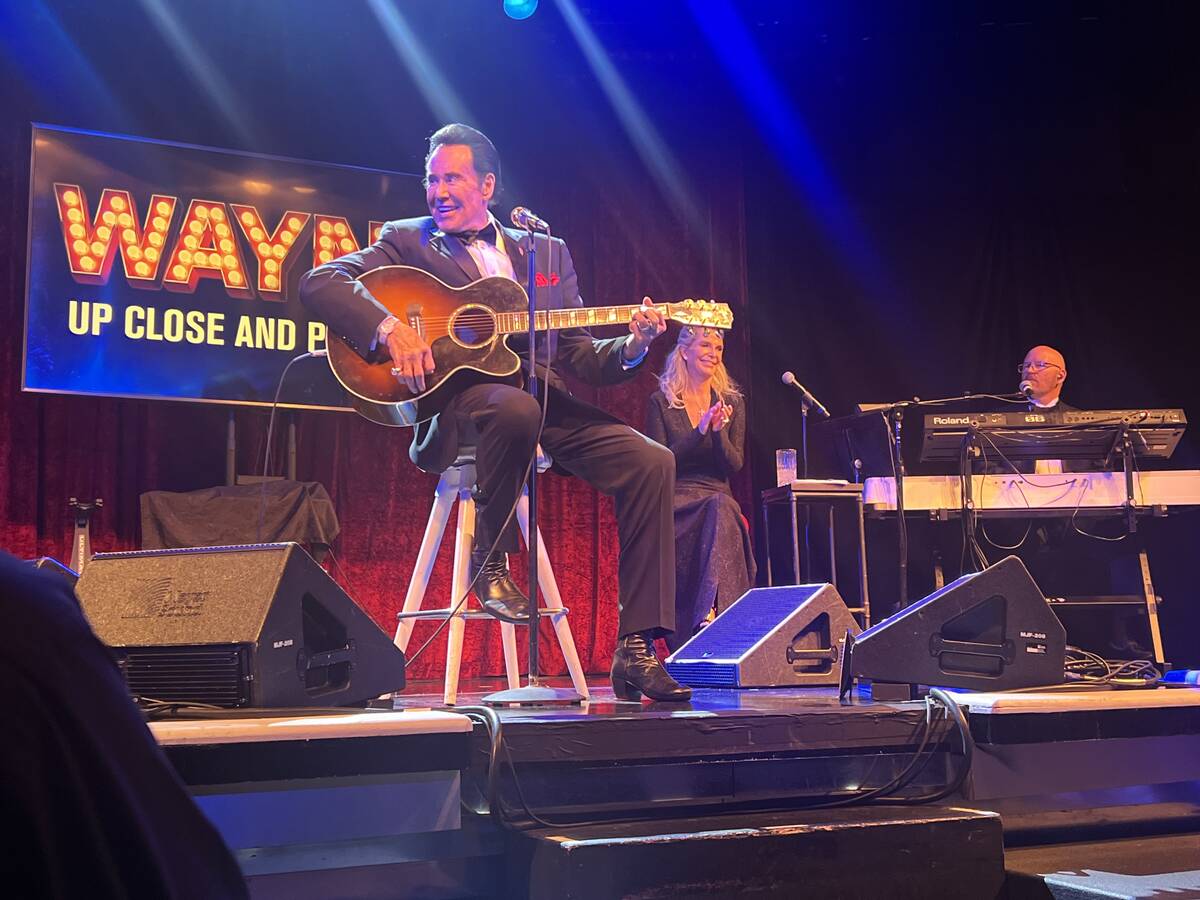 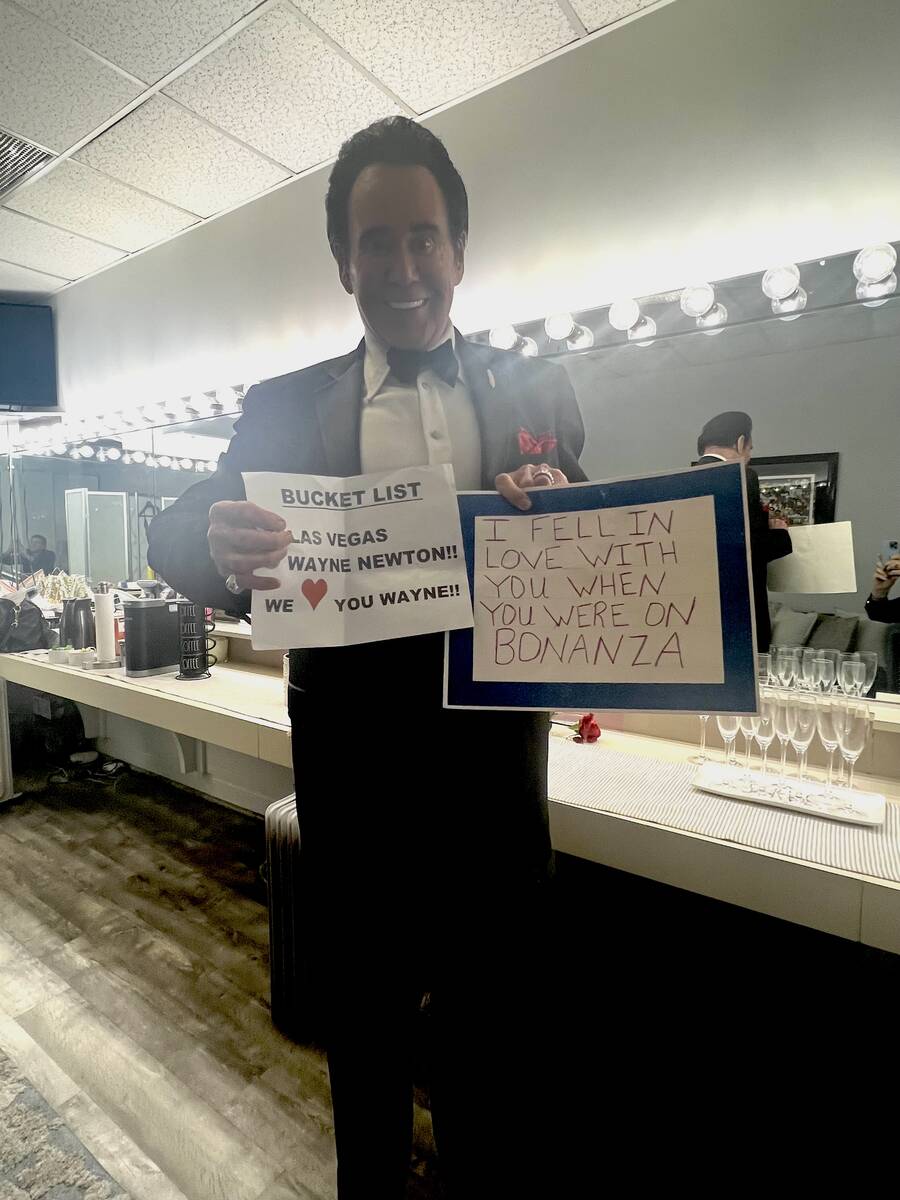 Wayne Newton is shown with signs given him by fans at the Flamingo on the Las Vegas Strip on Monday, Dec. 5, 2022. (John Katsilometes/Las Vegas Review-Journal) @JohnnyKats 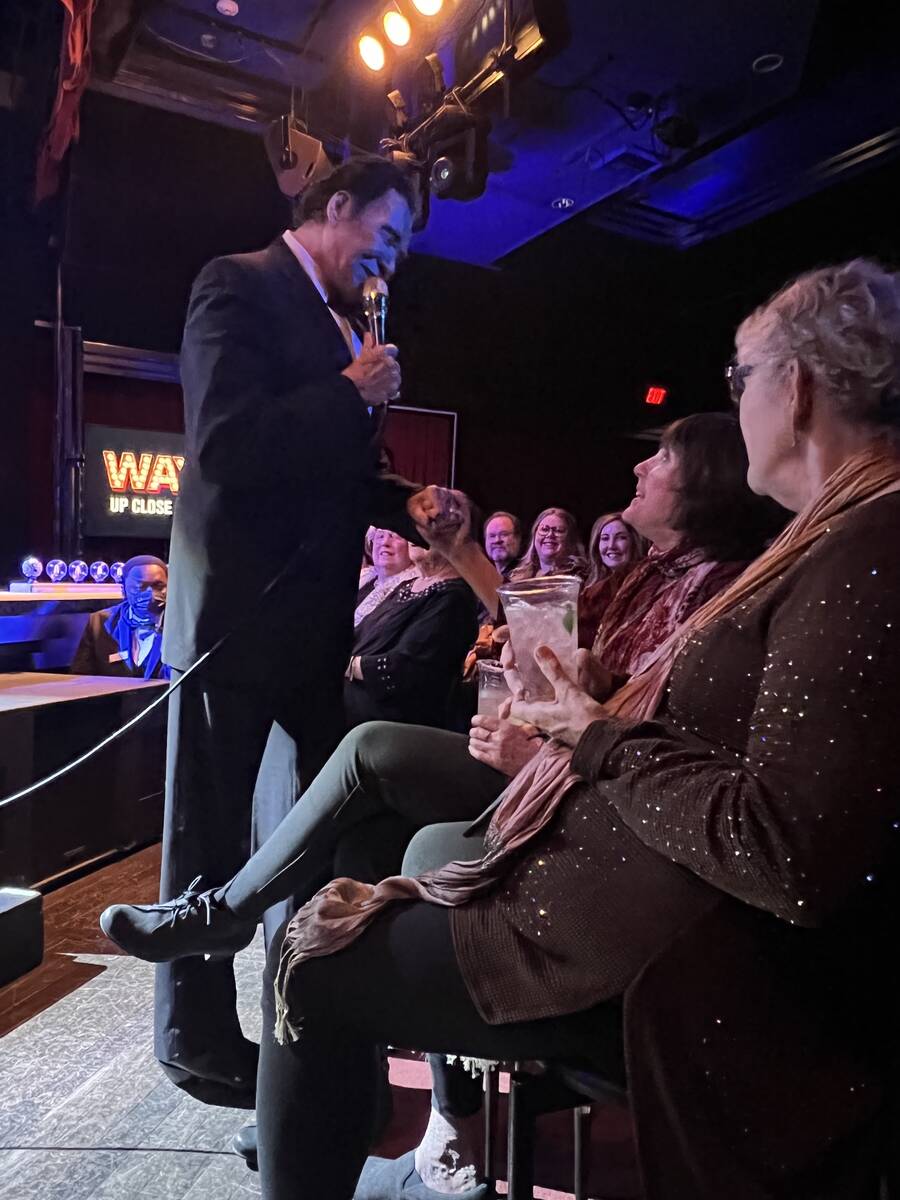 Wayne Newton is extending his residency at the Flamingo, where he first headlined as a showroom act in 1963.

And this is a residency that hearkens to a time when residencies extended beyond a few weekends.

The 80-year-old legend has announced more than 70 shows at Wayne Newton Theater inside Bugsy’s Cabaret, and that’s just between January and July. Newton’s “Up Close and Personal” multimedia cabaret-style show will continue from Jan. 16 through June 28. Performances run at 7 p.m. Mondays, Wednesdays and Saturdays (tickets start at $69, available at Caesars.com/shows). Newton’s final shows this year are this Wednesday and Saturday, and Dec. 26 and 28.

As should be expected, Mr. Las Vegas reveals the new schedule with a classic Vegas anecdote. He recalls a night five decades ago with Pearl Bailey, Jack Benny, Benny’s Stradivarius and the old MGM Grand.

Benny was the legendary comedian who was a mentor to Newton as Newton became a superstar. Newton and his brother, Jerry, had opened for Benny around the country, including Harrah’s at Lake Tahoe. It was there that Benny said if Newton couldn’t move from the hotel to the showroom as a bona fide headliner, Benny himself would refuse to appear.

The hotel relented, booking Newton and sending the talented young entertainer on his way to stardom.

Benny was performing what would be his final Vegas shows at the MGM Grand — today’s Bally’s (and soon, the Horseshoe Las Vegas) — in 1974. He would die Dec. 26 of that year. Bailey, also a close friend (her husband, Louie Bellson, taught Newton to play the drums), had moved into the opening-act slot vacated by Newton, who attended opening night at the hotel’s Celebrity Room.

Just before the show was to open, Bailey suffered a heart attack and was rushed to the emergency room. In a serious bind, Benny called Newton backstage and asked, “Would you go on?”

Newton remarked the two had not put an act together and had not performed in the same show in years. He also happened to be working at the Sands at the time.

“I said, ‘I don’t have any instruments, we don’t have any dialogue that we did all those years ago,’” Newton recalled in a post-show chat Monday night in his Flamingo dressing room. “And he said, ‘Well, you can play my violin.’ When I got on stage, the instrument waiting for me was Mr. Benny’s Stradivarius.”

Benny was known to play a very rare, very valuable Stradivarius dating to the early 1700s.

“I was stunned, but somehow, we got through it,” Newton said. He performed the next night, too, at Benny’s request, though Newton was a headliner for Howard Hughes’ Sands and Frontier hotels at the time. Legendary entertainment director Walter Kane sent word to Hughes that Benny asked Newton to perform at MGM, a competing hotel.

Kane relayed Hughes’ response, “If he doesn’t show up for Jack Benny, I don’t want him back.”

With that blessing, Newton worked out his own schedule to show his gratitude to Benny.

These are the types of tales Newton spins, along with a handful of classics, at show at the Flamingo. The headliner is backed by a three-piece band and joined by an on-stage moderator who looks very familiar to Newton fans. The showcase is spiced with many vintage photos and video clips of Newton with Benny, Jackie Gleason, Elvis, all of the Rat Packers, Ed Sullivan and a great medley with Glen Campbell. Newton is also shown in a duet with Sammy Davis Jr. that is something special.

The Flamingo show is a hit with old fans and many of the younger generation who have made the pilgrimage to Flamingo to capture a piece of Las Vegas history. In a recent show, Newton was handed a sign reading, “Bucket List — Las Vegas Wayne Newton!!!” That message speaks to the icon’s enduring appeal.

The show’s 2023 extension typifies Newton’s legendary work ethic, and brings back the days of old-school residencies. Newton dates to a time long before that term was redefined to refer to any performances spanning more than a single weekend.

Newton recognizes the new residency strategy as “a new thing, I’m just getting used to,” and offers, “I’m not sure the acts get the benefit of what the city has to offer,” by performing in comparatively short bursts.

Newton is asked if he has any advice for contemporary stars playing where he, Elvis and the Rat Pack set the scene.

“Off the top of my head, it’s to take care of your voice. You have to understand it is a muscle, and you have to treat it that way,” Newton said. “We used to talk about ‘Vegas Throat’ a lot, and it is a real thing. You need to make sure your instrument is ready for the desert.”

Newton is in good condition these days, as fit as the fiddle he breaks out midway through his show. He’s comfortable in the cozy room, where he says, “You’re right there, in front of the audience.”

The Vegas legend says he views the Flamingo, where it all started 60 years ago, as his home for the foreseeable future.

Stoney’s Rockin’ Country at Town Square hosts a pair of throw-down hoedowns during NFR. Friday its emerging artist Tyler Braden, who has been a special guest of Brantley Gilbert and Brooks & Dunn on tour. Saturday it’s Haley Mae Campbell, whose single “Never Been in Love” has exceeded 41 million views on TikTok and Instagram and flew to No. 1 on the All Genre and Country iTunes charts. Advance tickets start at $10, onsale at etix.com, search Stoney’s Rockin’ Country. Shows are 18-over, doors at 7 p.m.