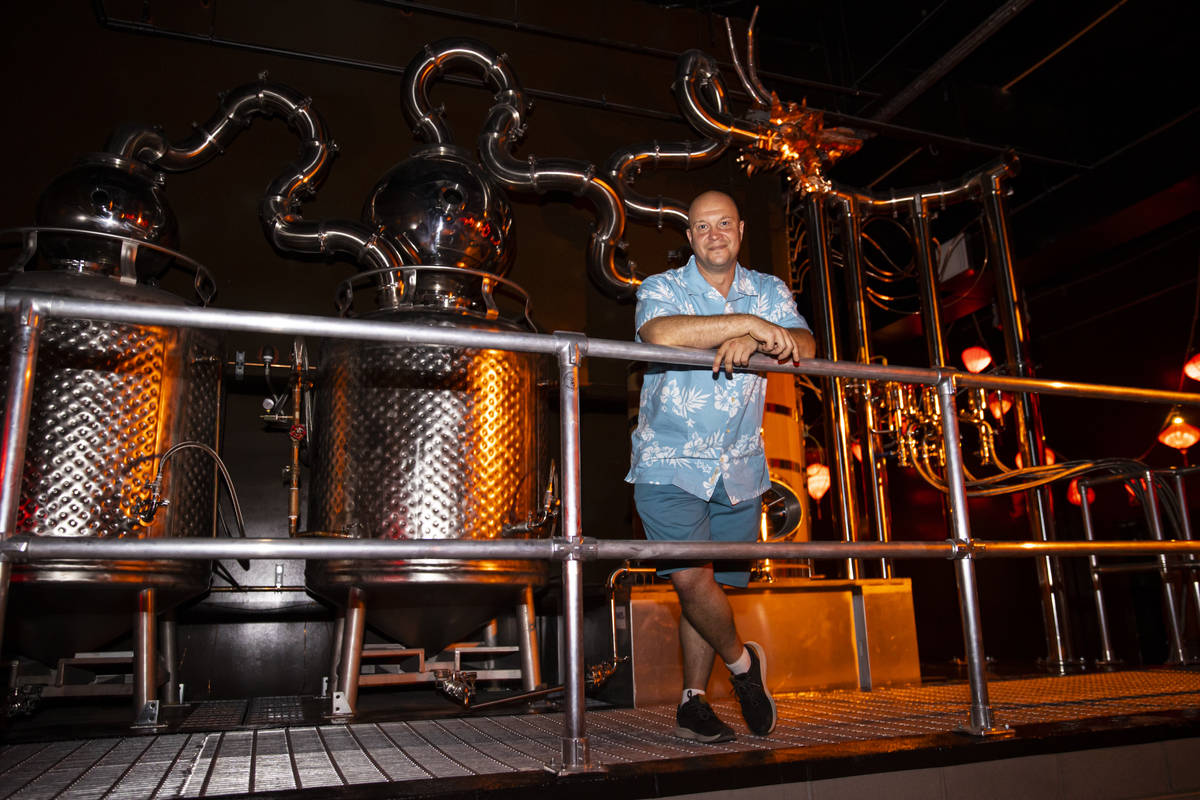 Bryan Davis, founder of Lost Spirits, builds all the stills used at his distilleries and tops them with a dragon sculpture. (Chase Stevens/Las Vegas Review-Journal) @csstevensphoto

The calendar-shrinking contraption sits behind a glass window. “That’s the actual gear that’s used for aging the booze,” Bryan Davis says, eyeing a series of stainless steel tanks fronted by a smaller machine with a clear facade. Davis will bring his Lost Spirits Distillery to Area15 on Aug. 15.

Six years ago, Davis debuted the Thea One reactor, a device that essentially mimicks the aging process for creating spirits. With it, Davis was able to create alcohol in a few days that could take 20 years to produce using traditional techniques.

“We were trying to figure out how you make a better bottle of booze,” Davis explains. “That was sort of the starting point. And then from there, it became a question of, ‘OK, well, how do you approximate what happens inside the barrel?’”

So, how does it work?

By getting rid of the barrel, essentially.

The process begins with spirits and wood put into a tank and heated up until you’re able to extract a catalyst from the wood that triggers esterification, a chemical reaction essential to booze aging.

“Once we extract the compound out of there that we can use to trigger the esterification reaction, we then take a little bit of the booze, fill up the glass tube and drop all of the wood in here,” Davis says.

The tube is then blasted with bright light.

Think about the time, energy and cost it takes to produce spirits using normal methods: whiskey alone requires at minimum five-to-seven years to age into a quality product. It does so in barrels that can cost hundreds of dollars apiece, and then must be warehoused somewhere.

Now imagine eliminating almost all of that overhead.

“When I created the technology, I wasn’t really trying to speed up aging,” Davis says. “I was trying to figure out how to mimic the effect in the lab so that I could go set up a battery of 3o tests to try to figure out which barrel I should be buying, which type of oak, which level of toast or char, which yeast I be should using on my fermentation and then try to connect all those dots to get to a product that I was going to be happy putting on the market.

“At some point,” he elaborates, “we just kind of realized, ‘Oh (crap), I think we’ve actually gotten better at this than what we could get doing this the old-fashioned way. Screw the barrel, let’s just keep getting better at this.’”