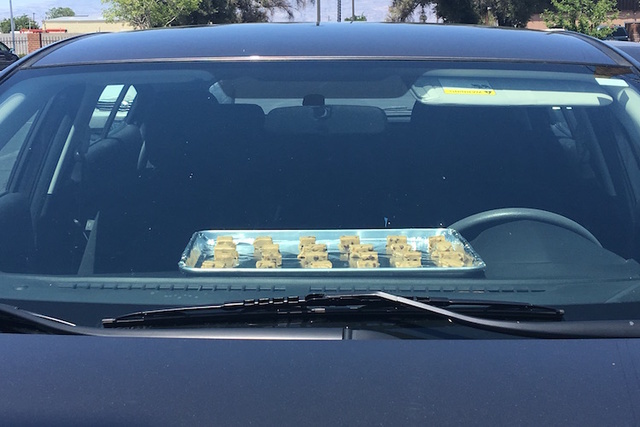 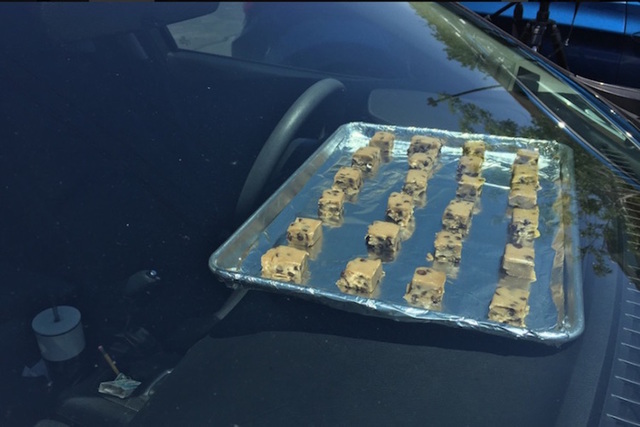 With the temperatures in the Las Vegas Valley rising to 115 for the first time this year today, we wanted to prove something — that it actually gets warm enough inside a vehicle and on hot asphalt to cook food during the summer..

Here’s what happened when we tried to bake cookies inside a car and make breakfast outside:

We placed a tray of 24 cookies on the dashboard of a car with untinted windows just after 1 p.m. They started to quickly take shape after only baking inside for one-hour. The cookie dough partially melted on the short walk from the RJ building to the car.

UPDATE 235pm: It’s 114 degrees and we almost get to eat the #RJcookiespic.twitter.com/oMGOVjvPyb

At three hours, the edges were definitely browning, but the top of the cookies needed to bake a bit longer.

Finally, after four hours basking in the hot sun, the tray of cookies were done, even overdone.

The tray of cookies went fast, too, with overall positive reviews from those who tried them.

“I was expecting them to be soft, but they were crunchy,” RJ photographer Michael Quine said. “It is a dry heat, after all,” he joked.

Making breakfast (and a side of shrimp) on asphalt

Although our staff fully roasted standing outside in the heat to observe the egg, bacon strips and shrimp as they fried on the asphalt, the same can not be said about the food itself.

After 20 minutes “cooking,” the asphalt was only hot enough to fully cook the shrimp, but the two strips of bacon were arguably partially cooked on the edges.

However, the heat of the asphalt was not even remotely hot enough to do any sort of damage on the egg.

UPDATE! the asphalt was hot enough to fully cook the shrimp, partially cook bacon & didn’t effect the egg at all pic.twitter.com/aPghan6XS1