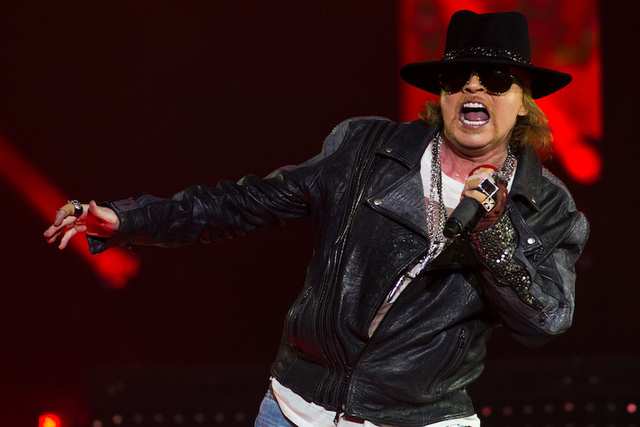 Guns N' Roses front man Axl Rose performs with the band as part of their residency at The Joint at The Hard Rock Hotel in Las Vegas on Friday, Nov. 2, 2012. (Chase Stevens/Las Vegas Review-Journal)

Well, what do you know? There are some things in life that actually are worth the wait.

On Friday at T-Mobile Arena, Guns N’ Roses made its much-ballyhooed return to the big stage, and the band did not disappoint — far from it, actually — which was pleasantly surprising. With all the buildup leading up to the eagerly anticipated semi-reunion, there was plenty of potential for Guns to, well, fire a bunch of blanks, as it were.

For starters, the guys hadn’t played an arena show together since August 1993. Add to that the fact that the act’s appearance wouldn’t serve as a full-scale reunion as everyone had hoped for featuring all of the original members. After months of speculation, confirmation finally came down after the first of the year that the old band was getting back together, minus a couple of key members. Then there was the news from Rose on Friday afternoon that he would be in a cast after having undergone surgery sometime earlier in the week to repair broken bones in his foot.

So, yeah, on paper this was poised to be a perfect letdown. Instead, it was exactly the opposite. Guns N’ Roses completely tore down T-Mobile Arena on Friday night with a 23-song set that lasted nearly two and a half hours. While it would be remiss to say that the guys picked right up where they left off more than two decades ago — Rose’s range isn’t entirely what it used to be at the act’s peak, but he can still hit many of the notes in his upper register and he sounds even more seasoned on the lower notes — they’ve still got it, no question.

The show didn’t start until midnight, which caused some handwringing in the crowd, with minor murmurs of “here we go again,” and rightfully so. In the past, Guns N’ Roses has had problems with punctuality. Once the band took the stage, however, all of that stuff was all but forgotten.

The band started the set off in the same sequence as their warmup show at the Troubadour a week ago. Tearing into two tracks from “Appetite for Destruction,” “It’s So Easy” and “Mr. Brownstone,” Rose and company came out swinging with a strapping one-two combination that had everybody howling in delirious delight. For the first five songs, the emphasis seemed to be entirely on Rose, his mononymously monikered bandmate Slash and Duff McKagan, as if to address the glaring absence of the other original members, Izzy Stradlin and Steven Adler.

Not only were those three individuals spotlighted, but Rose, seated center stage perched on a throne borrowed from Dave Grohl of the Foo Fighters, was wheeled out directly in front of the drum riser, completely obscuring the outfit’s ace timekeeper Frank Ferrer from view, until being slid over stage right in time for an especially vibrant version of “Estranged.”

Ferrer and the other members of the outfit, Dizzy Reed — who might as well be considered a core member at this point, considering he’s been part of the lineup since 1990 and was included in the act’s Rock and Roll Hall of Fame induction — guitarist Richard Fortus, and keyboardist Melissa Reese, played their parts to near perfection.

There were countless highlights over the course of the set, which included almost two dozen songs from the entire catalog, eight songs from “Use Your Illusion I & II,” more than half of “Appetite for Destruction,” at least three tunes from “Chinese Democracy,” and a solid selection of covers, including some standbys, “Live and Let Die,” “New Rose” by the Damned, “Layla,” by Derek and the Dominoes, “Speak Softly, Love,” from “The Godfather,” and a surprise with “Wish You Were Here” by Pink Floyd.

The last two tunes served as a showcase for Slash, who, clad in a sleeveless Scumbag Superstar T-shirt, his trademark top hat and shades, not only didn’t look like he’s aged a day since the “Appetite” days, but played like he hasn’t missed a single step. In fact, if not for the conspicuous absence of the ever-present cigarette dangling, you’d never know that almost a quarter century has passed. His playing was that on point. In fact, if anything, he’s only gotten better. The same could be said for McKagan, who took over vocals on “New Rose,” while Rose left the stage for one of several outfit changes.

Rose himself was positively personable on stage. While there didn’t necessarily seem to be any added chemistry between he and his formerly estranged bandmates, he was refreshingly reserved, leaving them plenty of room to share the spotlight, and respectful, saying Slash was “a man that needs no introduction but gets one anyway.”

What’s more, even though he was confined to a chair, he was admirably energetic and even more engaging. Early in the set, noting how he had borrowed the throne from Dave Grohl, he joked about how he hadn’t covered up the Foo Fighters logo, and later when whatever was concealing the crest was removed during the encore, he said, “I’d like to thank Mr. Grohl again. Least we can do is give him some free advertising.”

It was moments like that, along with scenes where he appeared to be fatigued — “Paradise City” felt oddly sluggish and hurried at the same time — that made him seem endearingly down to earth. When he and the rest of the band appeared on stage together after the final song, which we could’ve sworn ended with Rose hurling his microphone into the audience (talk about a mic drop), to take a bow and collect some well-deserved accolades, it genuinely felt good to give the guy some overdue props.

On the first night of its return, Guns N’ Roses gave everybody one hell of a show, replete with a dynamic set that dipped without losing any momentum — ballads like “November Rain,” which featured Rose on piano, were beautiful — and arena-worthy production, plenty of pyro, “Mind’s Eye”-worthy visuals, confetti cannons, and go-go dancers partially silhouetted in the background. When Rose’s reconfigured version of Guns N’ Roses played their pair of Las Vegas residencies in 2012 and 2014, it was billed as “Appetite for Democracy” and “Evening of Destruction,” respectively. This run could be called “Insatiable Appetite,” as this was the kind of show that you instantly wanted to see again as soon as it was over.

Welcome to the Jungle

You Could Be Mine

Sweet Child of Mine

Wish You Were Here