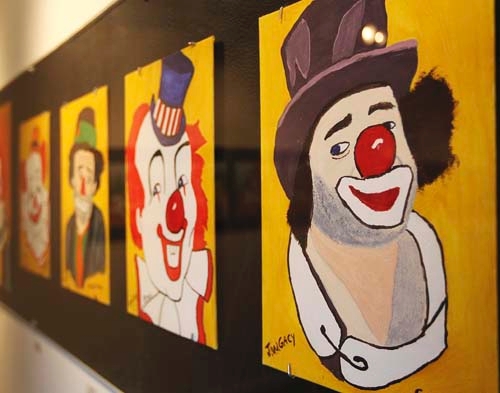 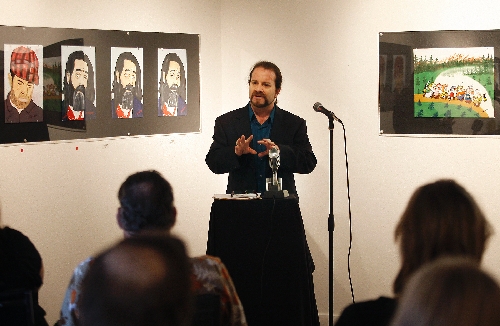 Wet, shiny, like narrow shards of glistening glass dipped into a pool of memories, her eyes carry a faraway pain.

Yet they are not tears. The dignified lady blinks them back, surrounded by carefully hung artwork created by the monster who murdered her brother.

“You never know when your emotions are going to come out again,” says Las Vegan Bonnie Schlesinger, whose brother, Michael Bonnin, was sacrificed to the homicidal appetites of John Wayne Gacy in 1976. “Sometimes they lay dormant for a long time, then they come up.”

She removes a yellowed newspaper article with images of Gacy’s nearly three dozen victims, placing a thumb next to a snapshot of Michael, whose life became a horrible statistic at age 17. The photos are obscenely humdrum, reducing young people who died horrific deaths to a generic checkerboard of smiling teens out of a high school yearbook.

Michael Bonnin was more than a square on a tragic grid. He enjoyed woodworking and carpentry. His last, unfinished job was restoring an old jukebox. While heading to catch a train to meet his stepfather’s brother, he vanished. “I did get to see justice served 18 years after my brother went missing,” she says. “It is closure and a release, but the feelings never go away.”

For all the raw feelings stirred up in some quarters, the exhibit, “Multiples: The Artwork of John Wayne Gacy,” came to a sedate end Sunday with a pair of lectures to about 30 patrons at the Contemporary Arts Center Gallery at the Arts Factory. Lining the walls were paintings, sketches, drawings, tracings and other pieces by the “Killer Clown” who raped and murdered 33 teenage boys and young men between 1972 and 1978, burying 26 of them in the crawl space of his Chicago-area home.

Convicted in 1980, he created most of the artwork on the CAC’s walls while in prison to raise money for his appeal. He was executed in 1994.

Also displayed were newspaper headlines on his case, plus memorabilia such as a letter to Gacy from Oprah Winfrey, inviting him onto her “AM Chicago” show for an interview, and a request from the Kinsey Institute Library to purchase his work.

“It doesn’t glorify him at all,” gallery-goer Christian Simpson says. “Let’s just see a little bit into his mind.”

Whether the public should have been invited into Gacy’s polluted psyche is the question that has hung over this exhibit since it first surfaced in May when Wes Myles, owner of the Arts Factory, was contacted by the executor of Gacy’s artistic and literary work about the possibility of exhibiting it.

Shown briefly in May, then held because of limited space, the exhibit reopened earlier this month at the CAC.

“He wanted to sell the art and give it to a good cause, so I agreed, but I didn’t realize the controversy it was going to inspire,” Myles says. Plans were to donate the proceeds of any sales to the advocacy group, the National Center for Victims of Crime, but that went awry.

“It was always my understanding they would get the money, but when we made the announcement, that’s when they said they’re not taking it, that they thought it was blood money and in bad taste,” says Laura Henkel, owner of Sin City Gallery, who appraised the artwork and initially hung six pieces in her gallery. “I think it’s sad that it can’t go to help victims.”

Myles views the group’s refusal to accept the money with some skepticism. “I empathize with the (victims’) families and I understand their point of view, but I found some hypocrisy, which is standard for government organizations,” he says. “Like the victims’ group didn’t accept dollars from this, however they accept money from the sale of (Unabomber) Ted Kaczynski’s auction recently.”

Several Gacy pieces have been sold, he says, fetching from $1,500 to $15,000. Currently the CAC is the beneficiary, in part to offset the cost of mounting the exhibit, but Myles says he’s still hoping to find victims’ advocacy groups that will accept the proceeds. Ramifications have gone beyond that flap, however.

“I’ve had a lot of people in the art community who were very upset with me and I’ve had some artists drop me,” Henkel says. “But being an educator, I saw this as an opportunity to talk about a whole realm of issues. It was not my intent to celebrate him.”

Attempting to enlist academics from the University of Nevada, Las Vegas as lecturers was futile. “They all said no,” she says. “I think some were afraid they would lose grants by being associated with this.”

Instead, out-of-state lecturers were brought in. Sunday’s speakers were Sam Amirante, Gacy’s attorney and author of “Defending a Monster,” and Dr. David Gussak, chairman of the Art Education Department of Florida State University and an art therapist.

“We can do a late-case autopsy into what Gacy was about,” Gussak says. “We have the artwork to help demonstrate if he had any type of mental illness or degenerative qualities that emerged in the art that would otherwise not be available. His art is derivative, it’s flat, it’s boring, in many cases ridiculous and it reveals how much he was trying to mask from the world what he was really about.”

Most pieces, Gussak says, were Gacy playing to commercial tastes to raise funds, but a few opened a window into Gacy’s mind. “One painting is a very bizarre-looking landscape, and it’s a real glimpse into what Gacy was like without his mask on. In that instant, we really get a sense of who he is.” Several Gacy landscapes also left gallery-goers ambivalent. “I like his landscapes and that bothers me a little bit,” Christine Lutz says. “They’re very compelling, there’s more emotion in them than all of the rest, the clowns and the other serial killers.”

Adds patron Shannon Strout: “The paintings of the clowns and the seven dwarfs look really creepy and it says something about the character of John Wayne Gacy. I was very shocked at how beautiful the landscapes were. I would never own it, but I don’t think it should be hidden from the public.”

Neither does Bonnie Schlesinger, her very personal loss notwithstanding. “It’s just like 9/11; people look at that all the time, it will never go away,” she says, but her glistening eyes still give away that faraway pain.

“Maybe I can learn a little bit,” she says. “But I didn’t come here looking for answers because there are no answers.”