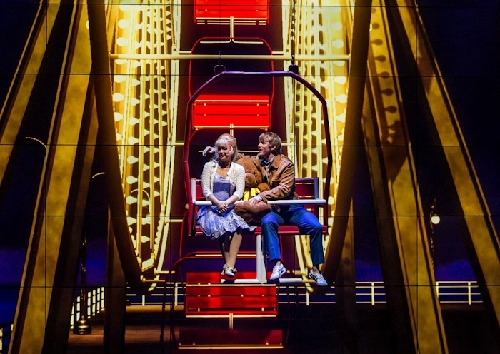 If all you’re looking for is fun, fun, fun, then “Surf the Musical” Is the wave to catch.

Set in early ’60s Southern California, just down the sand from Frankie and Annette’s endless-summer beach party, “Surf” revs up with clever staging and lively musical numbers performed by an appealingly peppy cast.

That would, and should, have been enough for such a breezy show – especially one with a 90-minute running time.

But “Surf’s” creators aren’t content to let well enough alone and allow the cast – and the audience ­- to kick back and enjoy all the fun in the sun.

Instead, they keep clogging things up, and bogging things down, with melodramatic conflict and attempted emotional depth. Except that “Surf” never gets out of the shallow end of the pool.

Mind you, I’m all for drama and depth, when a show makes them a priority – and makes room for them.

In “Surf,” however, the attempts at substance are no more than an afterthought, sometimes even an annoyance.

It’s almost as if the show’s creators feel compelled to compensate for the lighter elements that dominate – but the joke’s on them, because “Surf’s” featherweight attributes turn out to be its true strengths.

If Brooke doesn’t behave herself, Daddy (Broadway veteran Robert Torti, trying mightily to inject some subtlety into the proceedings) is gonna to take her T-bird away, leaving her susceptible to the black-jacketed, and maybe black-hearted, Rip Turner (an amusingly brutish Alex Ringler).

That is, until Tanner figures out that the big time isn’t for him and returns to paradise, setting up the gnarliest love triangle since Gidget found herself torn between Moondoggie and the Big Kahuna.

Clearly, “Surf’s” book – which more closely resembles an outline – is hardly the show’s strong suit. (It’s credited to Burton Young, although the program identifies J. Burton Gold, one of the show’s producers, as author.)

It’s one reason why, freed from the burden of carrying the plotline, some of “Surf’s” supporting players (notably Nikki Tuazon , as flirty help-me Rhonda, and Riley Costello as Brooke’s precocious younger brother) turn out to be more vivid stage presences than “Surf’s” bland, blond leading couple.

At least director Kristin Hanggi (who also helmed the bound-for-Vegas “Rock of Ages”) knows how to put the jukebox in this jukebox musical, keeping “Surf’s” energetic ensemble on the move.

Although RJ Durrell’s choreography is as much bump-and-grind as Swim (or Surfer Stomp), its propulsive “Dance Dance Dance” zest keeps “Surf” bopping along – and shows off Gregory Gale’s beachy-keen costumes to boot.

Darrel Maloney’s vivid video projections provide smooth, almost cinematic transitions from beach to pier to suburban street, while cast members pop up, out of and around Beowulf Boritt ‘s scenic designs like a toy store full of jumping jack-in-the-boxes.

It’s almost the kind of show where you could leave whistling the staging – if it weren’t for all those irresistible Beach Boys tunes.

“Surf” sometimes tries too hard to shoehorn certain songs into the show, even when they don’t quite fit the context. (Exhibit A: a goofy rendition of “Heroes and Villains” delivered by Tanner’s father confessor, a philosophical surf-shack proprietor played by Adrian Zmed of “Dance Fever” and “TJ Hooker” fame.)

Yet from surf-and-dragstrip faves (“Surfin’ Safari,” “Little Deuce Coupe”) to dreamy ballads (“God Only Knows,” “The Warmth of the Sun”) to wistful musings (“Wouldn’t It Be Nice,” “I Know There’s An Answer”), “Surf’s” Beach Boys score gives the show a beat – and a heartbeat – you can dance to.

But please, leave the dancing (and the singing) to the guys and gals onstage. After all, that’s why they’re there.