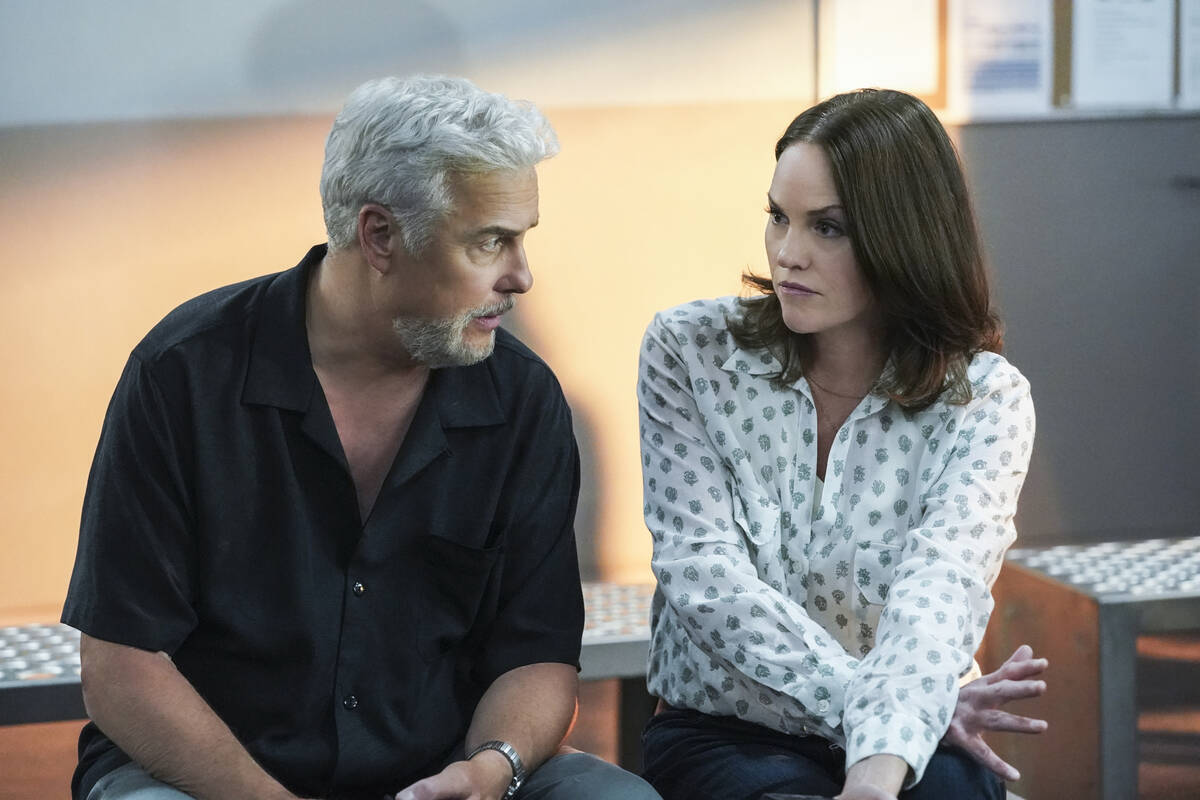 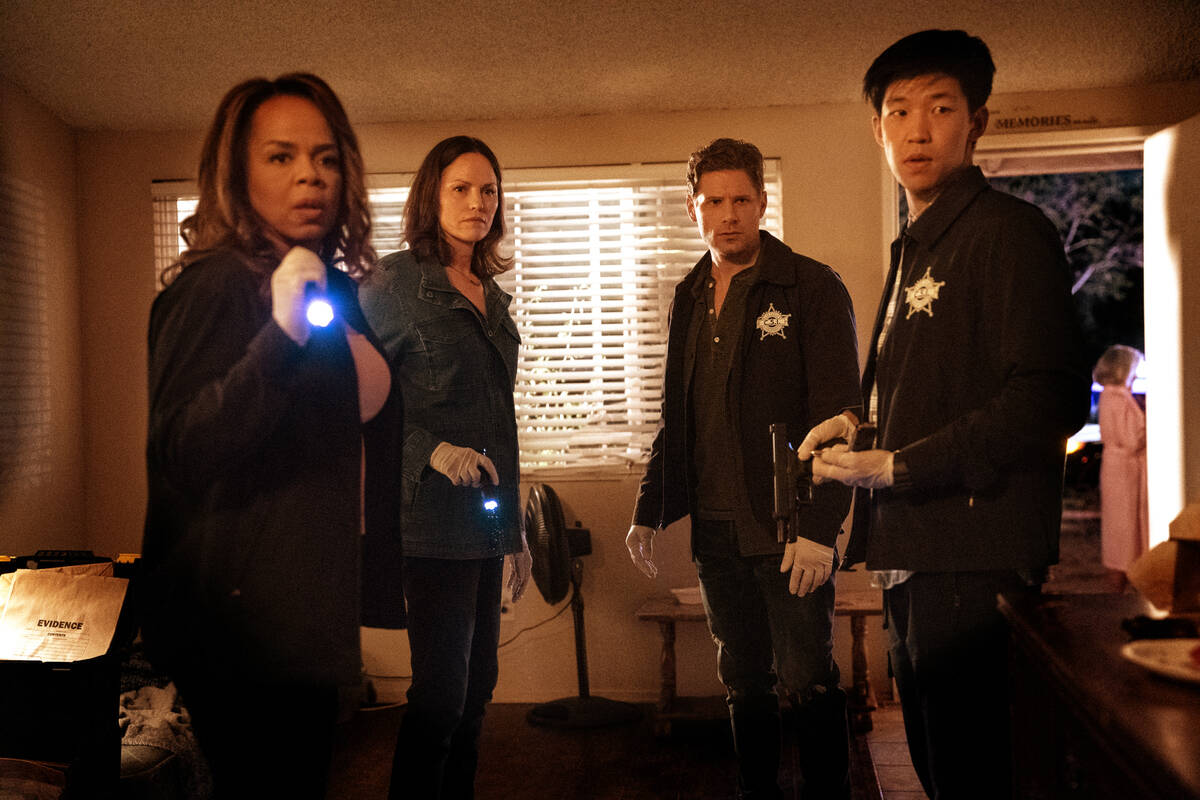 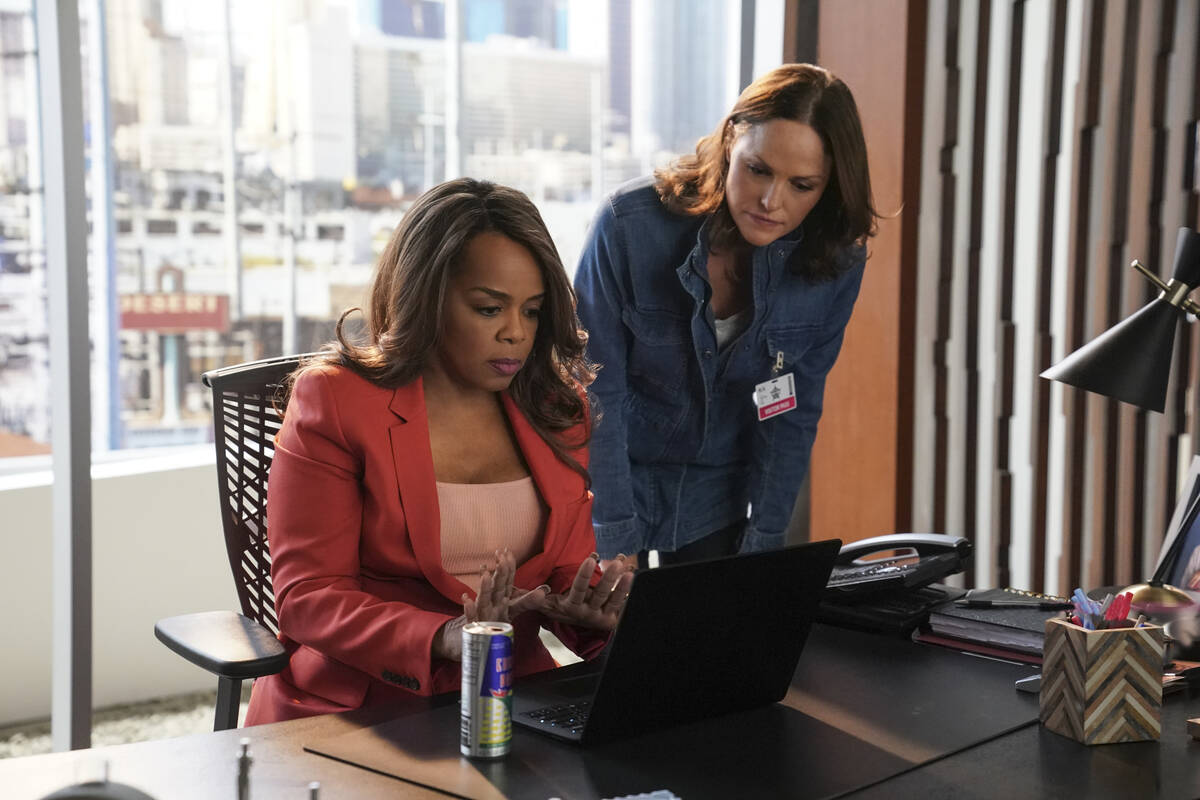 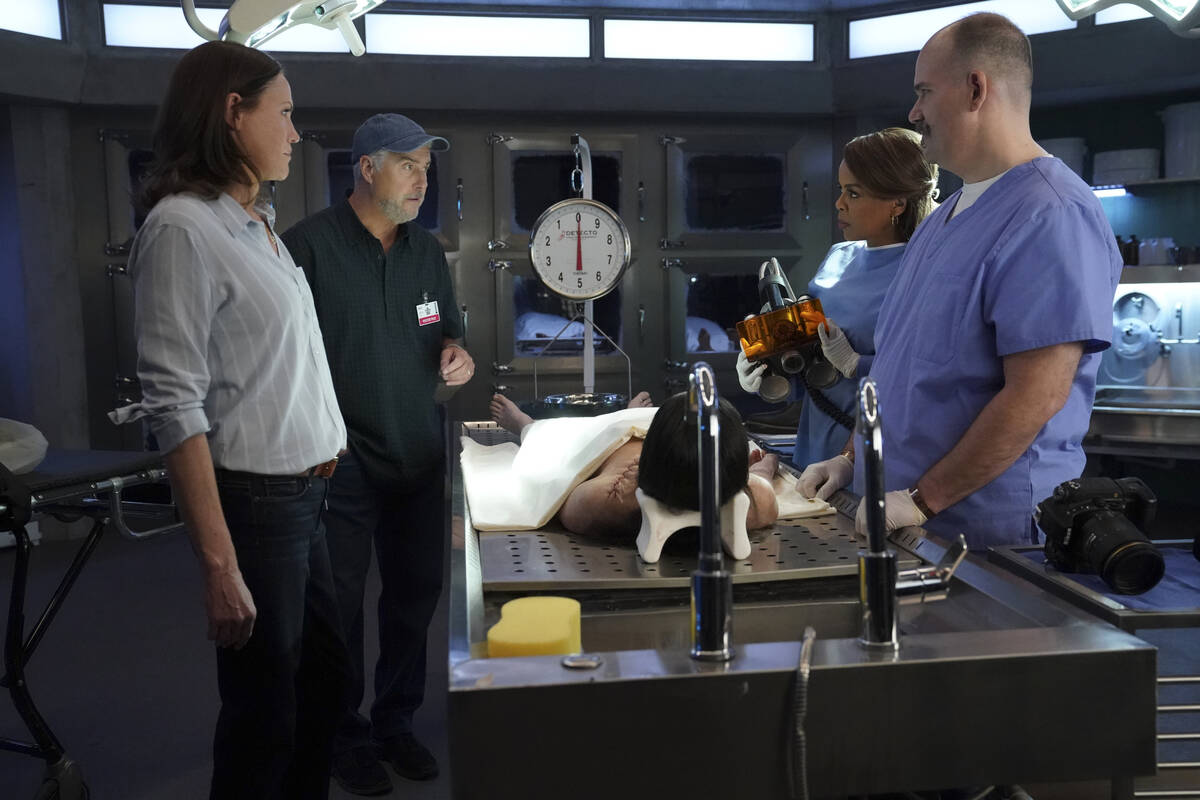 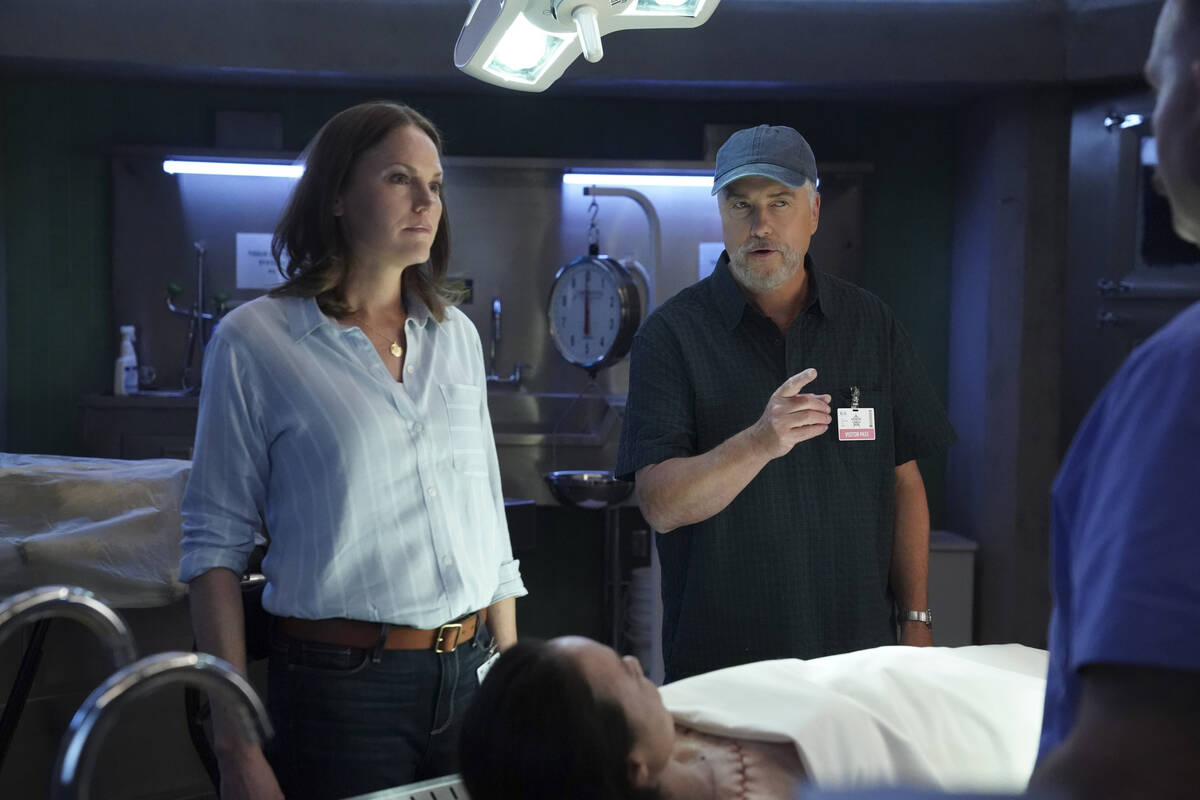 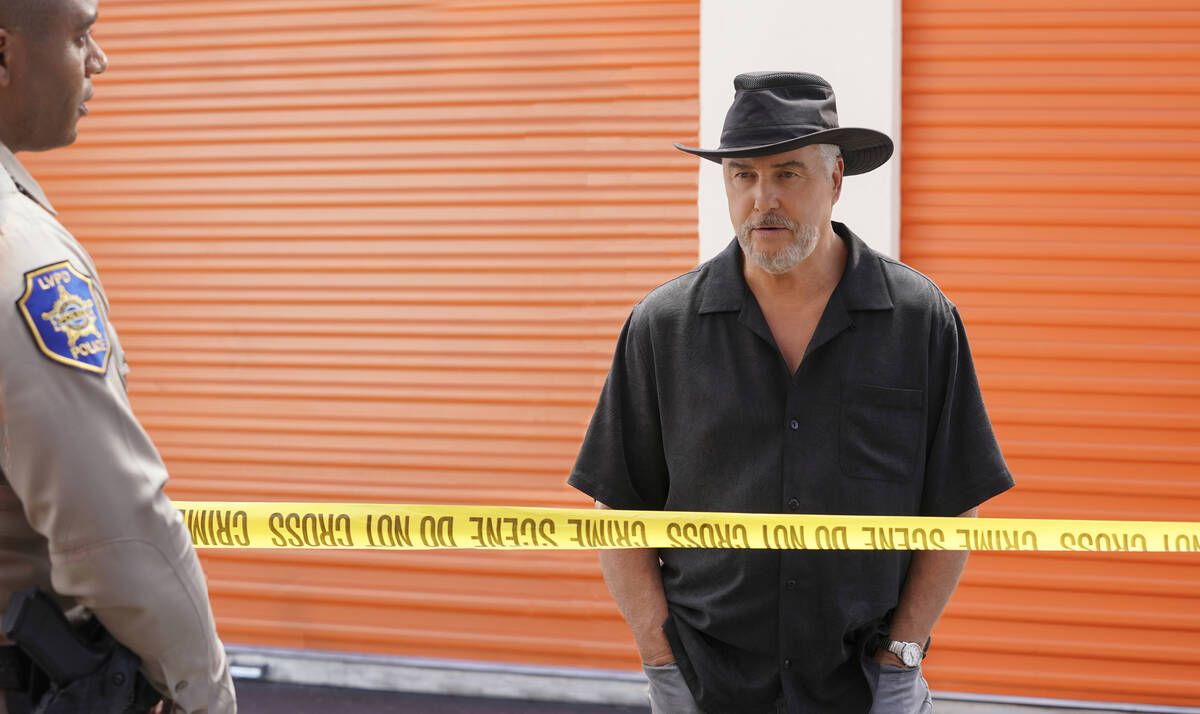 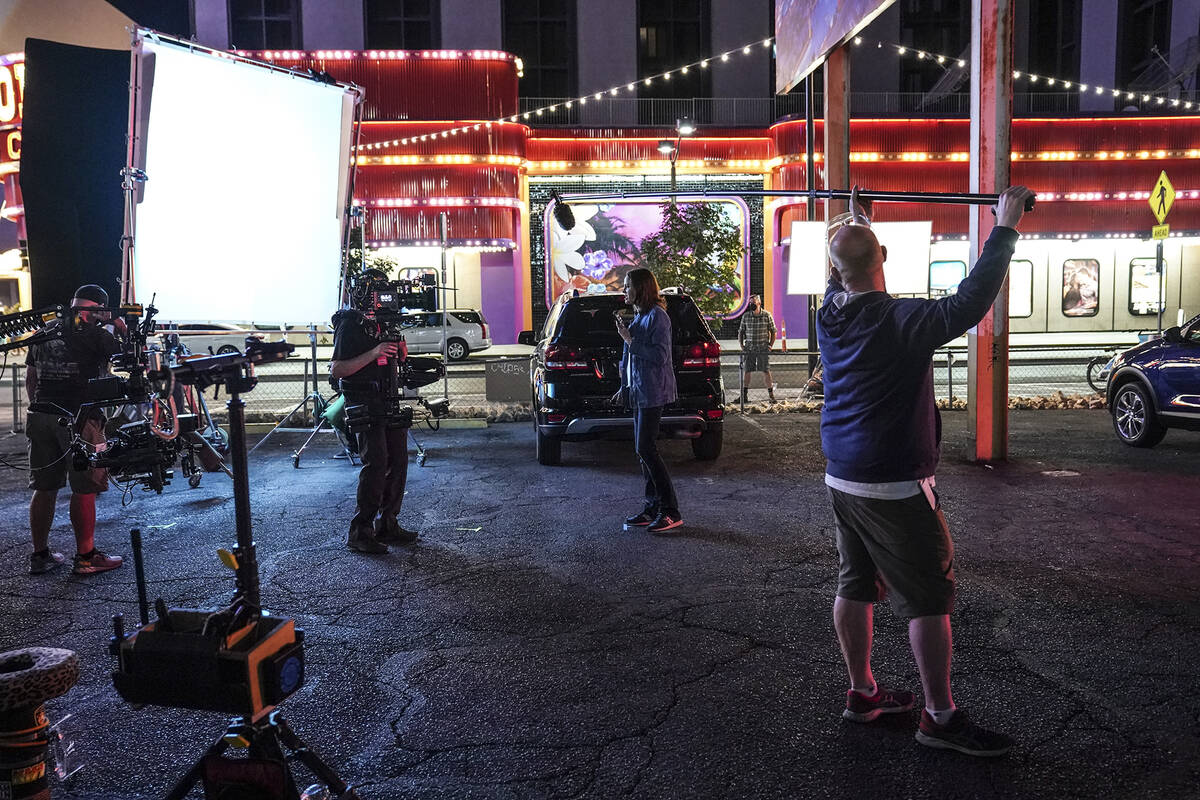 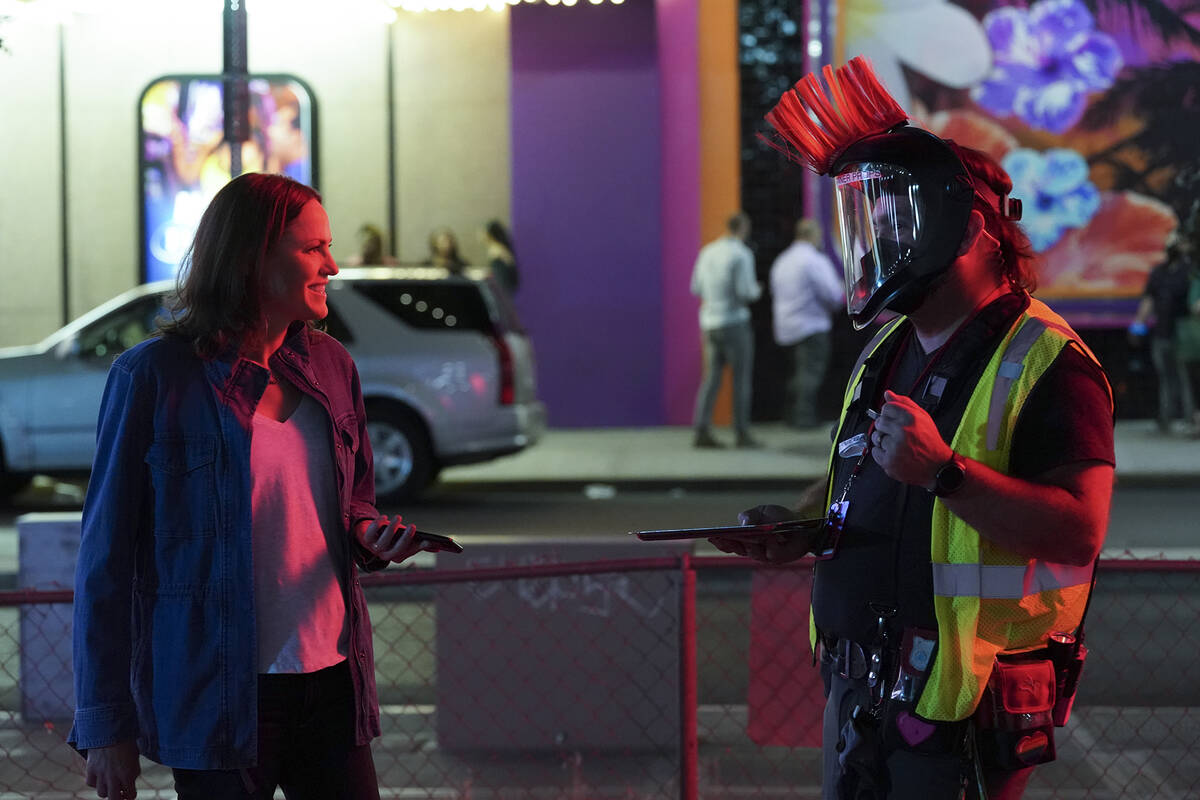 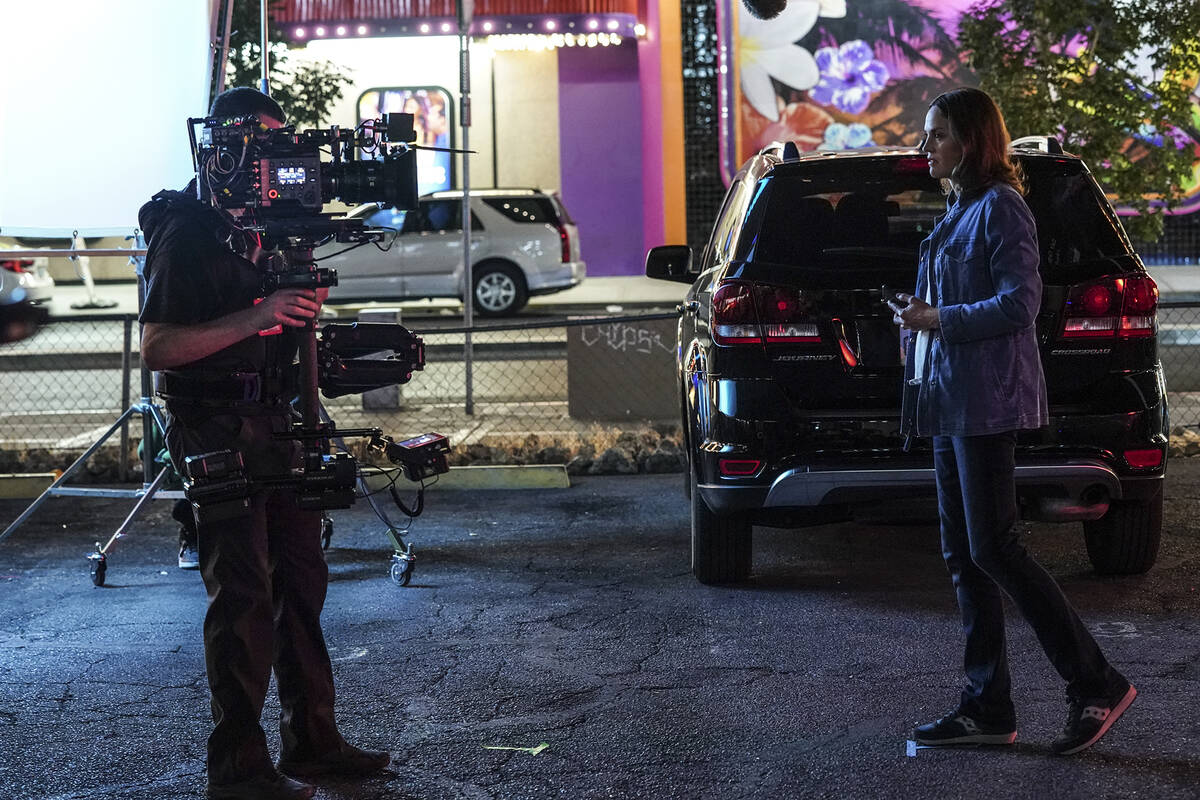 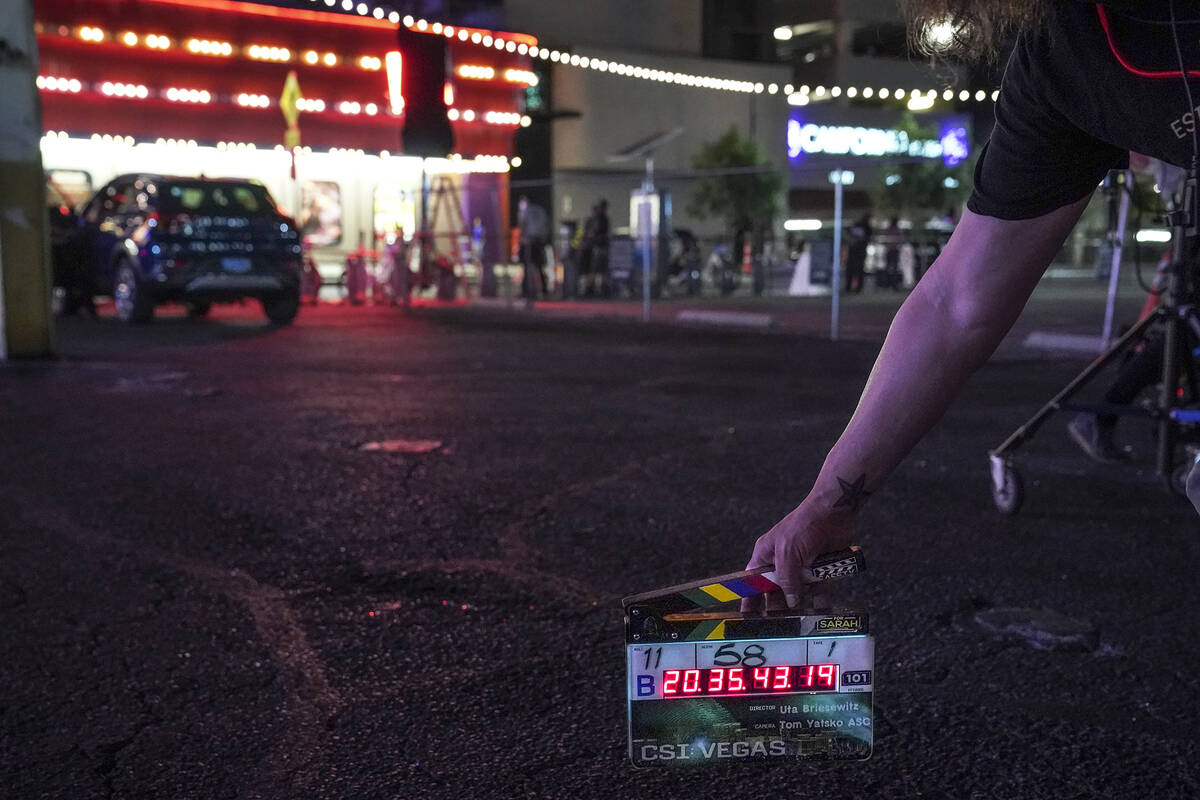 The neon glows as the camera zooms down Tropicana Avenue, swings over the Fountains of Bellagio and hovers above Circa and its Stadium Swim before going back for a dizzying, shimmering spin around the Strip.

Eighteen months after the start of the pandemic, with memories of boarded-up megaresorts still relatively fresh, the footage showcases a Las Vegas that’s back and every bit as gorgeous as ever.

Moments later, after a pillar of local law enforcement is attacked in his home, a team of investigators photographs the bloody aftermath.

Six years after its apparent demise, “CSI,” the ratings juggernaut that, at its peak, beamed Las Vegas to more than 70 million viewers around the world, is back as well.

The new incarnation, “CSI: Vegas,” debuts at 10 p.m. Wednesday, 21 years to the day after “CSI: Crime Scene Investigation” began presenting the city as a place where residents and visitors are very likely to be very elaborately murdered.

Jorja Fox assumed she was done with Sara Sidle.

The analyst she had played, on and off, since the show’s second episode returned for the two-part “CSI” finale in 2015. She was joined by Gil Grissom (William Petersen), Sara’s love interest and the show’s original crime lab supervisor, to give the series a proper sendoff.

“I absolutely thought that it was the end of the book, that we’d done all the chapters,” Fox says. “We were so lucky to get a finale; so few shows get it. And that it was a happy finale made it, I think, even more rare, kind of like finding a pearl. I was, like, ‘OK, this is it.’ And I was really, really happy where Sara and Grissom were left.”

Executives at Jerry Bruckheimer Television, which produced the series and its three spinoffs — “CSI: Miami,” “CSI: NY” and “CSI: Cyber” — soon had other ideas. They reached out to Fox in 2019 to gauge her interest in a limited series that would celebrate the show’s 20th anniversary the following year.

“It was easy for me to say yes to that,” Fox admits. “But it was important to me that if Sara was going to come back, I really wanted her to come back with Grissom. You know, they were together and not together, and married and broken up, and taking time apart and living apart. For it to really work, at least storywise for me, then I really wanted it to be both of them.”

She got her wish, as Sara and Grissom reunited for what would become “CSI: Vegas,” with lab tech David Hodges (Wallace Langham) and retired homicide detective Jim Brass (Paul Guilfoyle).

Jason Tracey came to Hollywood to make movies. Then he saw “CSI.”

Having been drawn to its cinematic quality, he calls the series “one of the shows that kind of convinced me to try to write television.” He would soon make a name for himself as a writer and producer on USA’s “Burn Notice” and CBS’ “Elementary.”

When Tracey heard new ideas were being sought for a “CSI” revival, he jumped at the chance. “I will be there when your offices open on Monday morning,” he remembers telling executives. “I’ll be circling the parking lot.”

What Tracey pitched was a season-long, 10-episode story arc that would see Grissom and Sara working alongside newer recruits to defend their past work — and keep the monsters it convicted behind bars.

Paula Newsome had no idea she was being considered for the role of Maxine Roby, the new head of the crime lab.

“I was walking out of a Pilates class,” she recalls, “and suddenly I get multiple calls from my agents, and I’m, like, ‘Uh oh.’”

Once she landed the part, Newsome says her sister had only one response: “Are Grissom and Sara gonna be there?”

Maxine is a former college basketball player who earned a doctorate in genetics. She’s the show’s gateway to phenotyping, the biggest change in forensics in years.

“Somebody’s DNA doesn’t even have to be in the system, and you’re still able to say, ‘This is probably a left-handed person, and they’re allergic to avocado and they’ve got brown eyes,’ ” Tracey says. “It’s fascinating what can be done with the genome.”

That leaves Newsome, who’s perhaps best known for her role as Detective Moss on HBO’s “Barry,” to explain the use of “single nucleotide polymorphisms” to Sara and to shoulder dialogue like, “Who needs ballistics when you’ve got the microgametophytes of a flowering desert tree?”

Newsome insists she enjoys the technical jargon and says the language comes to her in rhythms that remind her of her days in musical theater. The biggest hurdle for her to overcome during the initial episodes was her nervousness around fellow Chicago-based actor Petersen.

The torch has been passed

Anthony Zuiker, the Chaparral High and UNLV grad who famously made the leap from earning $8 an hour driving the tram at The Mirage to television phenom when he created “CSI,” is still involved in “CSI: Vegas.” He was in the room when Tracey made his pitch, and he’s passed the torch to the younger writer.

“I had to understand, for the future of the franchise, that Jason needed to have enough space to take us where we needed to go,” he explains. “So, it really wasn’t about hiring a mini-Anthony Zuiker. … It was really about guiding him about what we are, culturally and scientifically, and allow him to be able to move the franchise into a new and fresh direction.”

The phenotyping that lets the CSIs narrow down a pool of suspects, almost Agatha Christie-style, and work from there isn’t even the biggest change from the original series, Zuiker says.

“There will be more personal storylines, more than ever before,” he promises, as the series, for the first time, follows the characters home.

Fox found that to be a refreshing change when it came to reprising Sara alongside Petersen’s Grissom.

“As epic of a love affair as they’ve had,” she says, “we really haven’t seen that onscreen very much. … It was really fun and different and exciting to sort of get to play that relationship.”

And while there have been story arcs that span multiple episodes — Natalie Davis aka “The Miniature Killer,” for example, and Nate Haskell, “The Dick &Jane Killer” — this is the first time a single plot has spanned an entire season the way Grissom and Sara’s will. While they work to defend the crime lab’s integrity, Newsome and the other new cast members — Matt Lauria, Mandeep Dhillon and Mel Rodriguez — tackle the crimes of the week.

“That was just something we just never really did,” Zuiker says of the serialized element. “I think that’s a step in the right direction. … As long as there’s streaming and bingeing, we kind of have to bend the narrative a little bit more to the technology and the viewing habits.”

The other major change is perhaps the most noticeable. It’s also the one for which the cast and creatives behind “CSI: Vegas” seem most proud.

“We have really thought long and hard about representation and how important it is during these times,” Zuiker says.

Newsome is the first woman of color to lead a “CSI” team. Asked if that’s still as big of a deal as it seems, she responds, “Two words: Heck yeah.”

CBS and Bruckheimer Television, she says, “were, like, ‘Let’s make some space here. Let’s make this place look a little more like America.’”

Fox notes that in 2000, forensics was a male-dominated field, with men making up maybe 85 percent of it. In the two decades since, she says, those numbers have flipped.

“The majority of the CSIs in Las Vegas are women of color,” Newsome adds. “So it’s not as though we’re doing fiction here. We’re just telling the truth.”

The lure of Las Vegas

While the idea behind resuscitating “CSI” was to celebrate the show’s legacy on its 20th anniversary, COVID-19 had other ideas. The pandemic not only delayed the episodes by a year, it limited the cast and crew’s ability to film in Las Vegas.

When the production came to town in May, though, it got its money’s worth as several segments of Wednesday’s premiere take place in and around the Fremont Street Experience. Downtown, it turns out, is where Tracey prefers to shoot.

“You’ve got a lot of different casinos and lights and action in real close proximity to each other,” he explains. Whereas the resorts on the Strip are so massive, “If you had a foot chase, you’d be in front of the Bellagio for an hour and a half.”

During that COVID delay, the 10 episodes remained the same, but “CSI: Vegas” morphed from a one-off event to what would become a regular series next season — assuming viewers turn up. That seems likely, considering that, during its heyday, the original was the most-watched TV series in the world for seven years.

Should it return, Fox hopes to come back for more filming.

“There’s nothing like shooting ‘CSI’ in Vegas,” she says. “I wish we could shoot the whole show there. It’s a whole other energy and a feeling.”

For now, though, circling back to those glamorous aerial views of Las Vegas, Zuiker feels a sense of pride in putting his hometown in front of millions of eyeballs in the best possible light.

“We made a concerted effort,” he says, “to make sure we’re showing the world the latest and greatest of Las Vegas.” 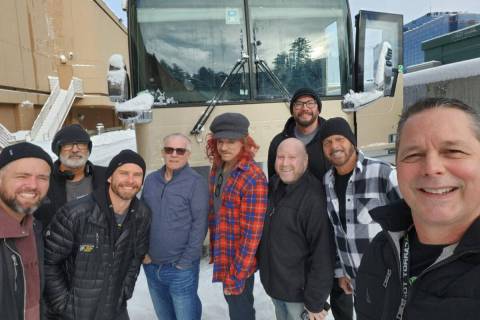