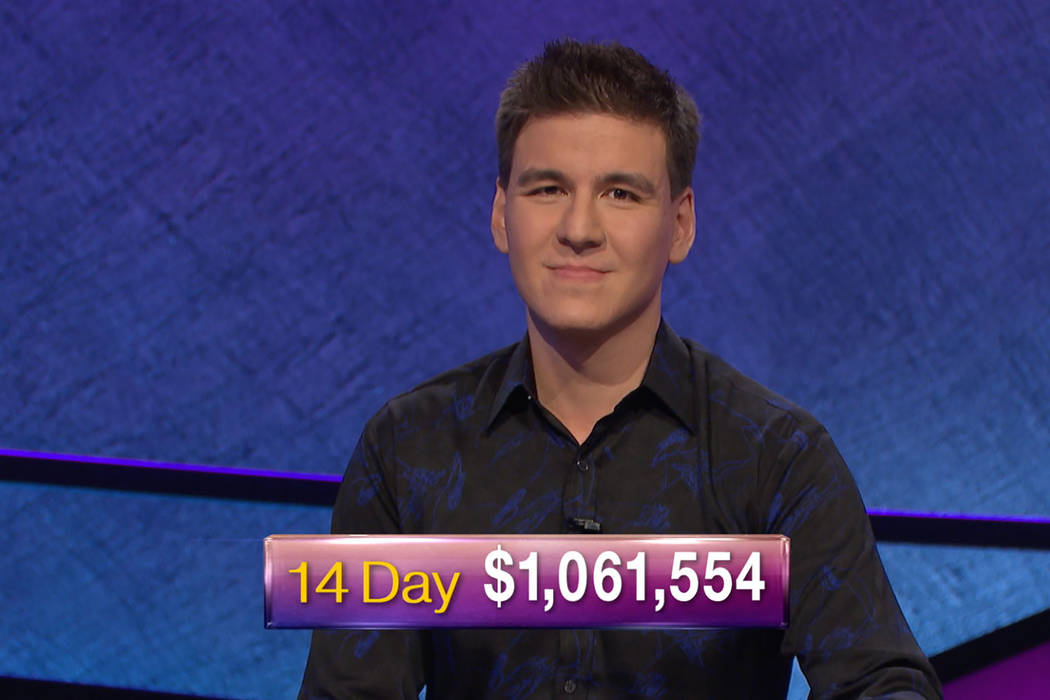 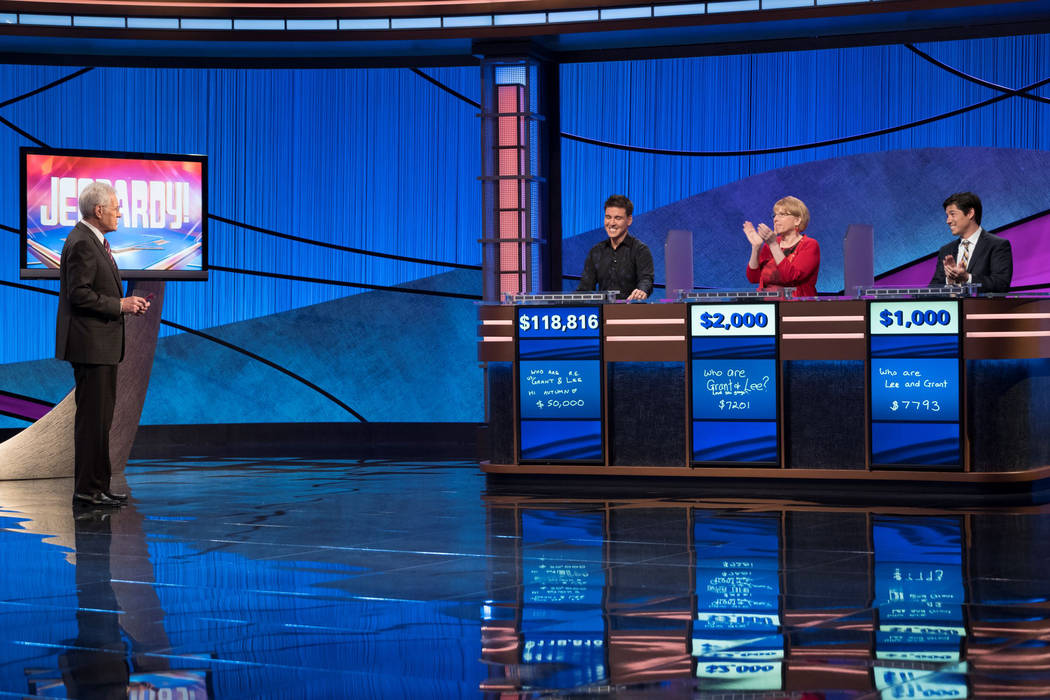 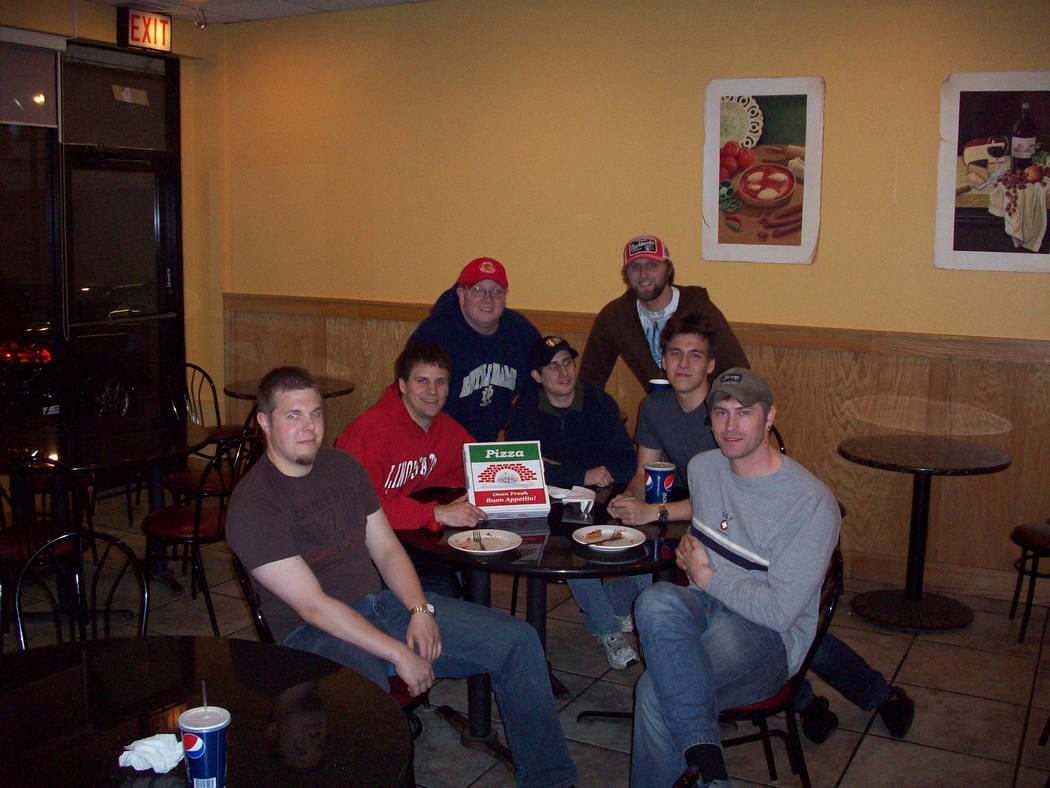 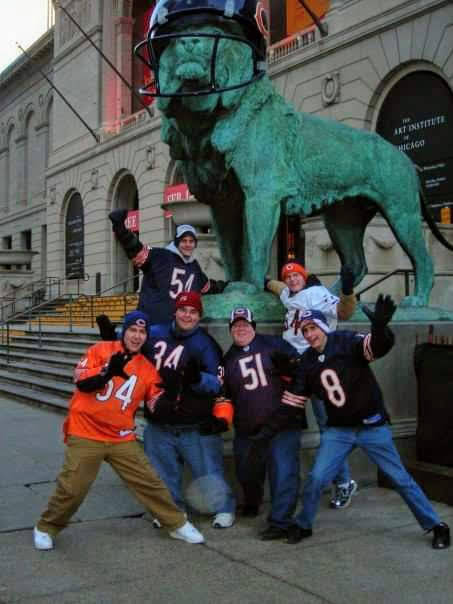 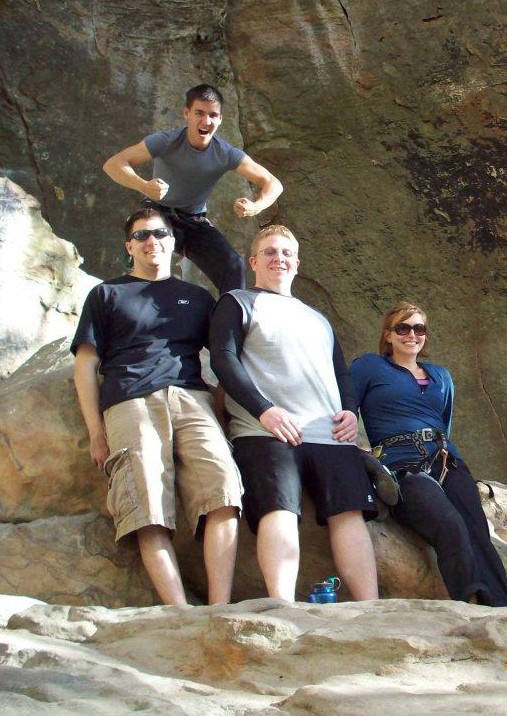 From left to right bottom, Brad Phillips, Jake Moore and Melissa Holzhauer, with James above, on a rock climbing outing in Kentucky. (Brad Phillips) 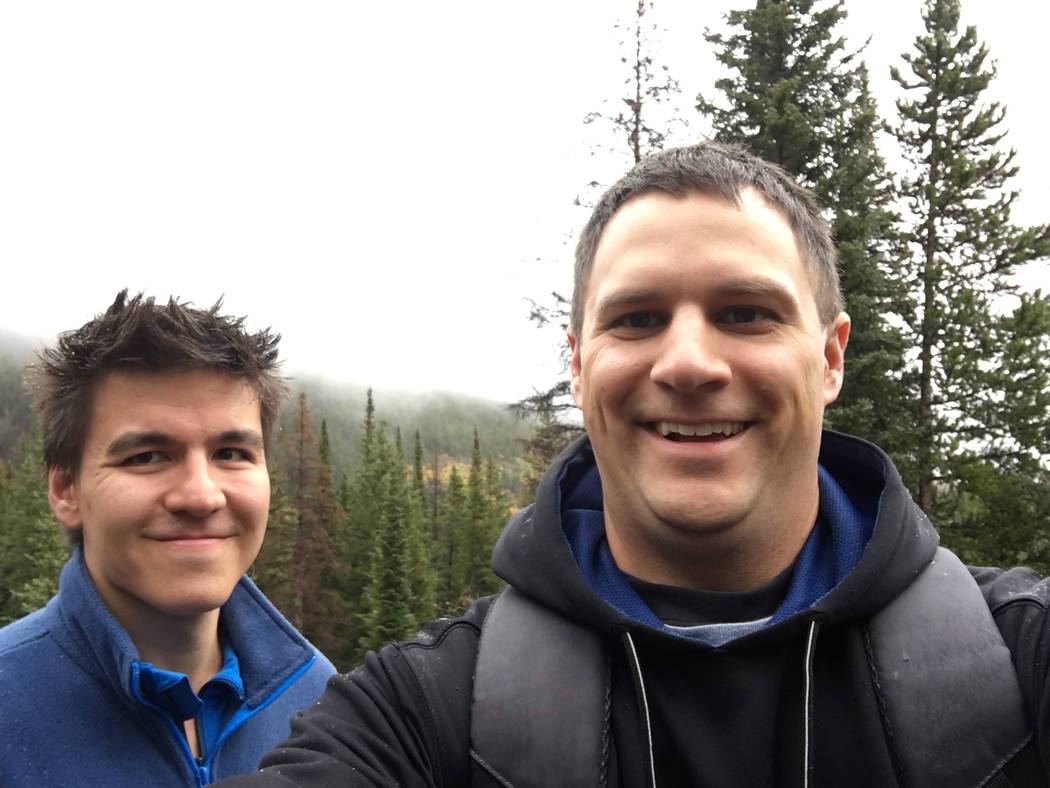 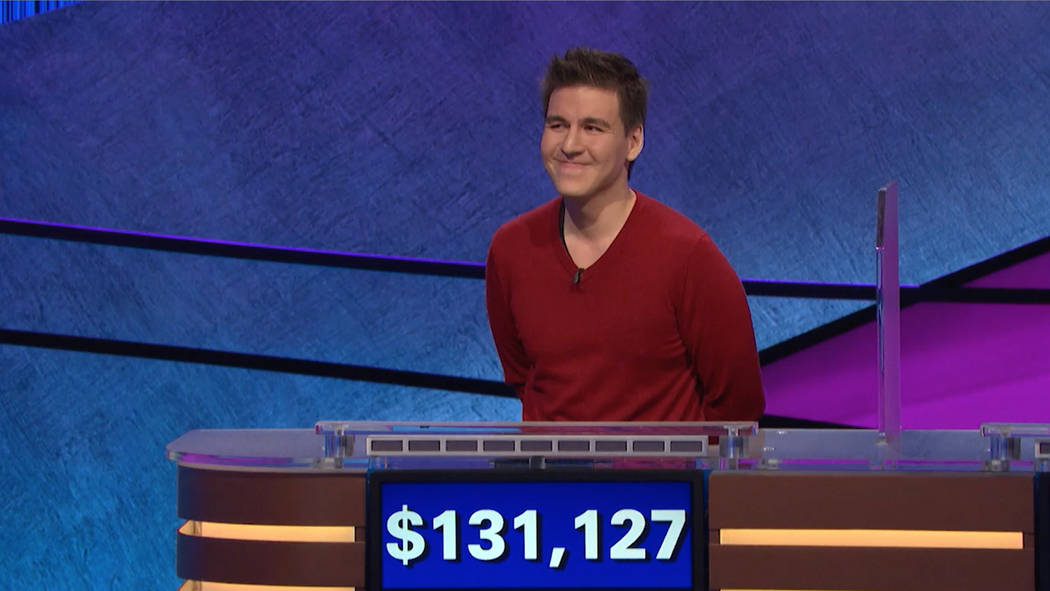 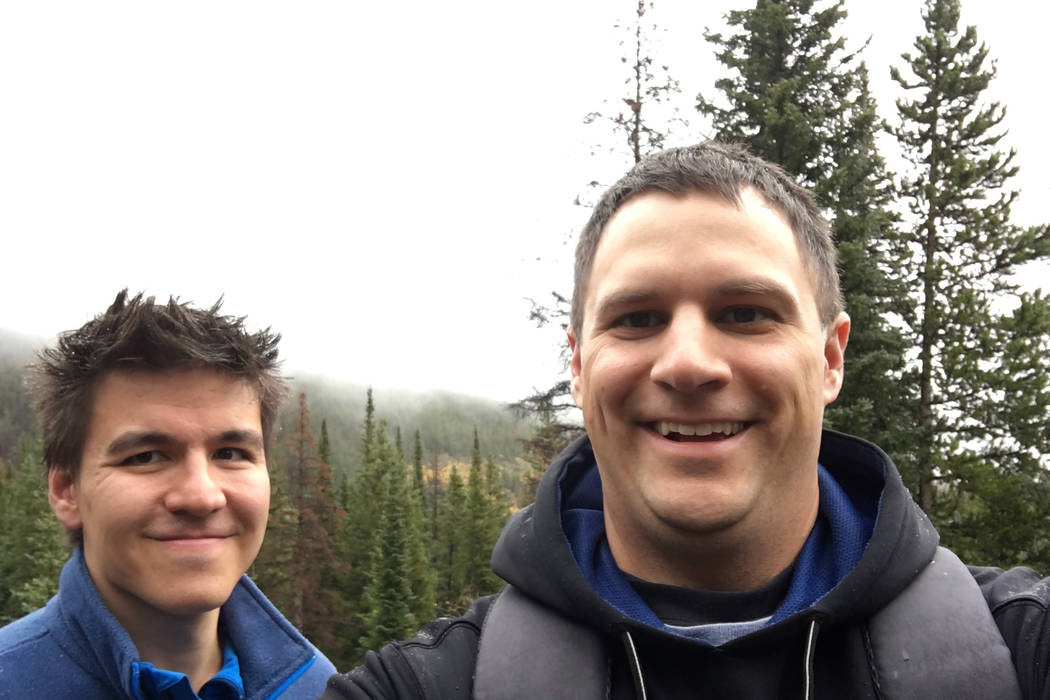 To most of America, “Jeopardy!” sensation James Holzhauer is a genius.

To his closest friends, the man they know as Jamie is also a genius — albeit one who loves professional wrestling, had to be airlifted out of Death Valley when he wandered into trouble and rocked a mullet as recently as 2005.

“I’m sure people would be surprised by all sorts of things about me,” the 34-year-old Las Vegas-based sports bettor wrote in response to emailed questions. “It’s odd that viewers think they can suss out a contestant’s whole personality based on 15 seconds of chatting with Alex Trebek.”

So we turned to some of the people who know Holzhauer best to get a picture of the man who, with a running total of $1,275,587 through Friday, has smacked around the game show and made it say his name like no other contestant in its 35-year history.

“We’ve always described him as one of the smartest and dumbest people we’ve ever met,” said Brad Phillips, 33, who lives in Holzhauer’s hometown of Naperville, Illinois. “Because he has all this intelligence and all this knowledge, but he also does a lot of common-sense stuff that just makes you wonder.”

Phillips recalled an event where the only seating was at high tables, and all the taller chairs were taken, so Holzhauer stacked a bunch of folding chairs and climbed on top. They immediately collapsed, an eventuality he said everyone else could see coming.

“He’s certainly not a regular guy. I think in the past, people have perceived him to be a little socially awkward,” Las Vegan Jeff Swanlund, 35, added of his friend, who tried out for the game show 13 times. “I think over the years, he’s gotten better socially, which is why I think he finally got on ‘Jeopardy!’ ”

His wife, Melissa, may be his perfect match

“In our pre-parenting days, my wife and I would often play pub trivia together. She liked the questions about trashy movies,” Holzhauer wrote. “She enjoys beating me at any game of skill or chance because I ‘always win at everything.’ ”

“I think they surround themselves with like-minded people. I would characterize the discussions among the group of friends as nerdy, for sure. Just like the minutiae of everything,” Swanlund said of the couple. “I think marrying his wife and having a child certainly helped him, I don’t know, fit into society better maybe? He’s always been this outlier, where he’s a lot smarter than everybody else, and he just sort of understands the world differently.”

“He was a terrible student. He skipped class all the time,” revealed Swanlund, who met Holzhauer in 2001 during their freshman year at the University of Illinois. “Even though he was really, really smart, I bet if you asked any of his professors, they’d be, like, ‘I don’t know who that person is.’ He just wasn’t interested in class, but he might be spending the summer reading some college textbooks about something about mathematics that he does like. I’ve seen him do that. When he’s into something, he dives into it and becomes an expert at it, for sure.”

His tastes are, um, eclectic

These aren’t the choices of typical “Jeopardy!” champions, whose tastes often veer toward art or literature.

“He appreciates that stuff,” Andrew Cook, 32, of Glendale Heights, Illinois, said of the finer things. “I think it’s attributed to his wife, too, to some extent. But at the same time, he’s down to earth. He likes good, classic entertainment, whether it’s monster truck rallies or WWE.”

Asked about the dumbest thing he’s seen Holzhauer do, Jake Moore, 36, of Woodridge, Illinois, laughed. “He wore a mullet for like six months.” This was around 2005-06 when, while watching a Chicago Bears preseason game at a bar, the other patrons started chanting “Mullet!” “I don’t know why necessarily,” Moore said of the unfortunate hair choice. “Maybe because he loves the metal bands. Maybe that’s why he had it.”

Really not a fan of Duke basketball

“He takes a lot of entertainment out of sports failures,” Phillips said. That’s especially true when they happen to some of the cockier, blue-blood teams, such as a certain basketball program out of Durham, North Carolina, whose demise he and his friends would celebrate each season. Said Moore: “We used to call it Duke Senior Crying on Coach K’s Shoulder Day.”

He does love the Golden Knights

Asked about his “Jeopardy!” preparations, Holzhauer wrote, “I did practice standing in dress shoes (often with a Knights jersey) while watching episodes on my DVR and practicing buzzer timing.” When writing his name on his “Jeopardy!” monitor, he’s substituted the Knights’ logo for the “M” in James. And he cranked the team’s rally siren before Game 6 of this season’s playoffs.

Even if his Chicago-based friends give him grief for it

“We kind of view him as a traitor now for a hockey fan, because he used to be a Blackhawks fan,” said Moore, who’s known Holzhauer since fifth grade at Naperville’s Highlands Elementary. “Vegas gets a team, and all of a sudden he’s switched allegiances.” That change happened to coincide with the Blackhawks’ downturn. So do his friends call him a bandwaggoner? “We kind of do it behind his back,” Moore said. “If the Blackhawks are good again, he would still be interested in following them, too.”

He’s no stranger to risk

Holzhauer has attracted a lot of attention for his aggressive strategy and heavy wagers on the show’s Daily Doubles as well as Final Jeopardy. That’s no surprise to his friends. “Even when we were playing poker back in college, if the tournament was for $5 each, he didn’t mind betting it all on the first hand. And then everyone would fold,” said Phillips, who met Holzhauer during their time at Naperville North High School.

That extends to other parts of his life, as well

“He doesn’t just deal with risk when considering what to bet on ‘Jeopardy!’ or how much to wager on a particular game,” Swanlund said. This is part of the reason why Holzhauer, an avid rock climber before he became a father, took a huge gamble years ago during a trip to Death Valley.

“He essentially climbed up this dry waterfall, not having a plan of how to get up or if he could get down,” said Swanlund, who accompanied him on the trek. “And then it turns out that he couldn’t climb back down, so he went on this quest to try to find a way down and ended up breaking his ankle in the middle of Death Valley, where he required a helicopter rescue. I don’t think an average person would have decided to take that risk, so I think he’s more comfortable with risk than a lot of people.”

He loves to travel

The life of a professional sports bettor, with its lack of 9-to-5 workweek, seems to suit Holzhauer just fine. “He just wants to take full advantage of life,” said Cook, who met him in a fantasy football league a decade ago. “Every time we connect, he’s, like, ‘Oh yeah, I’m going to Thailand in two weeks’ or ‘I’m going to France in three weeks.’ … Even if it’s going halfway across the world, he knows where to find culture. He knows where to find food. He knows how to make the most out of each day.”

But he isn’t extravagant

“Despite his success so far in sports gambling,” Phillips said, “he doesn’t really live the most luxurious lifestyle, besides taking those many trips. … He’s not going to go out and spend a lot on a very expensive, luxurious meal. He’d rather find a local hole-in-the-wall.”

His daughter’s a blabbermouth

“It isn’t hard for me to keep a secret,” Holzhauer wrote about the pressure of not revealing the “Jeopardy!” results. “It is hard for my daughter, which is why I kept her out of the loop. Luckily, she’s 4 and didn’t question why her gambler dad had to fly from Vegas to L.A. for ‘work.’ ”

“Many episodes I don’t watch live, because I’m too excited. I’m screaming at the television,” Swanlund acknowledged. “It’s a lot less stressful to maybe read what happened first and then watch it.” Holzhauer’s young daughter? Not so much. “I’ve watched just a random episode with him at his house while his daughter slept on his lap,” Swanlund said, “so she wasn’t as interested in watching him on television.”