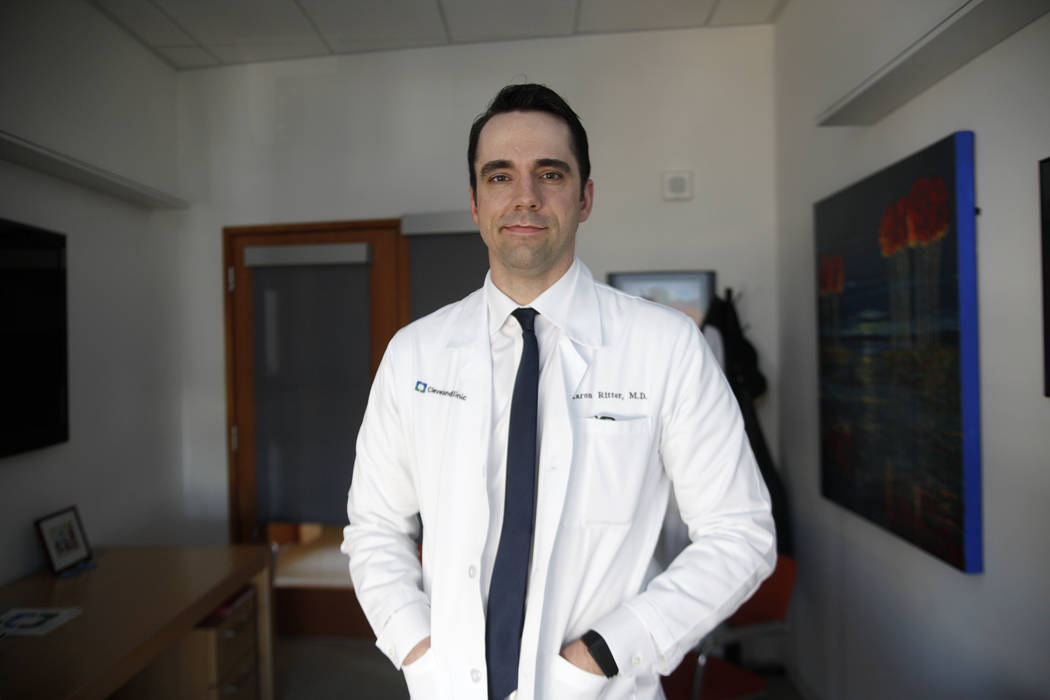 Dr. Aaron Ritter, director of clinical trials at the Lou Ruvo Center for Brain Health at the Cleveland Clinic in Las Vegas, Monday, March 26, 2018. A new study released Tuesday by the Alzheimer's Association reports that Nevada will see a large increase in residents suffering from the disease by 2025. According to Dr. Ritter, that is in large part due to Nevada’s growing senior population. Rachel Aston Las Vegas Review-Journal @rookie__rae 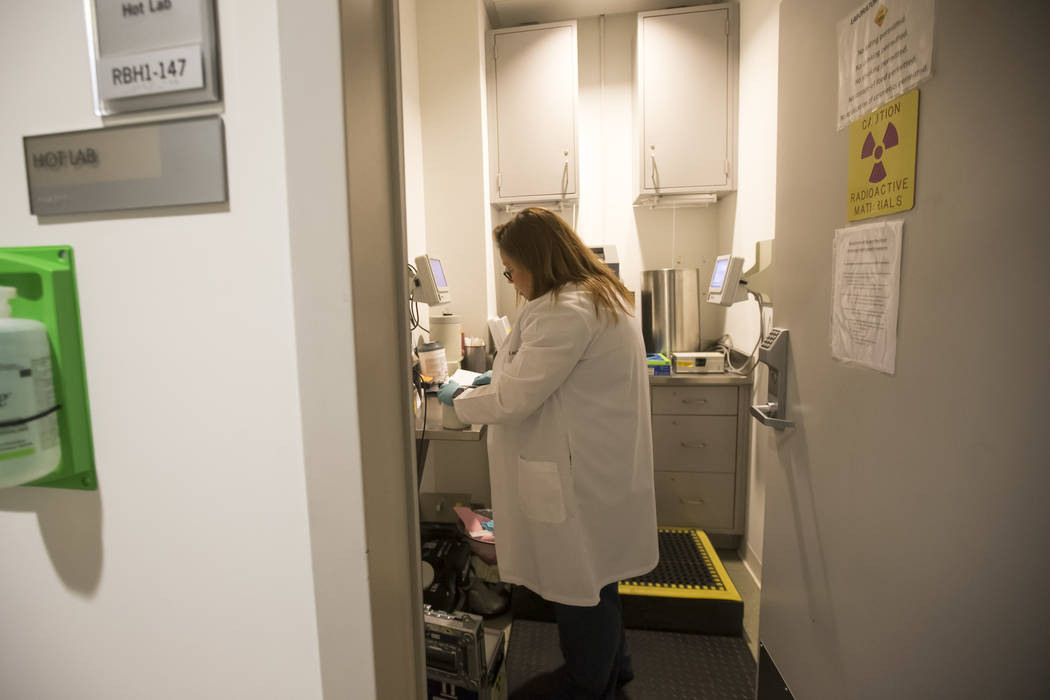 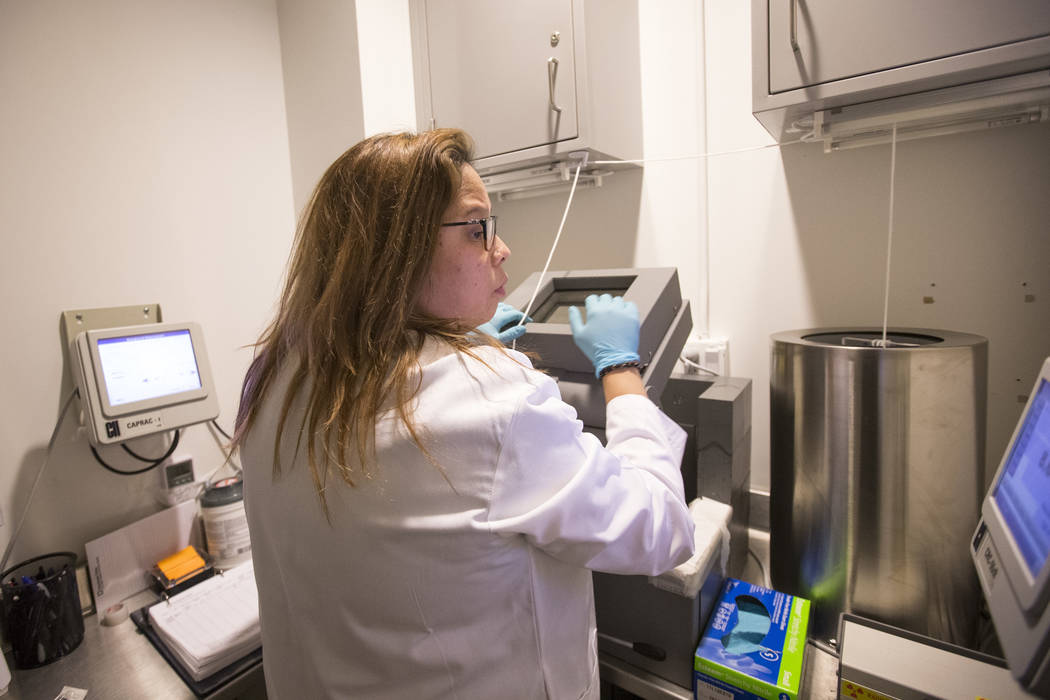 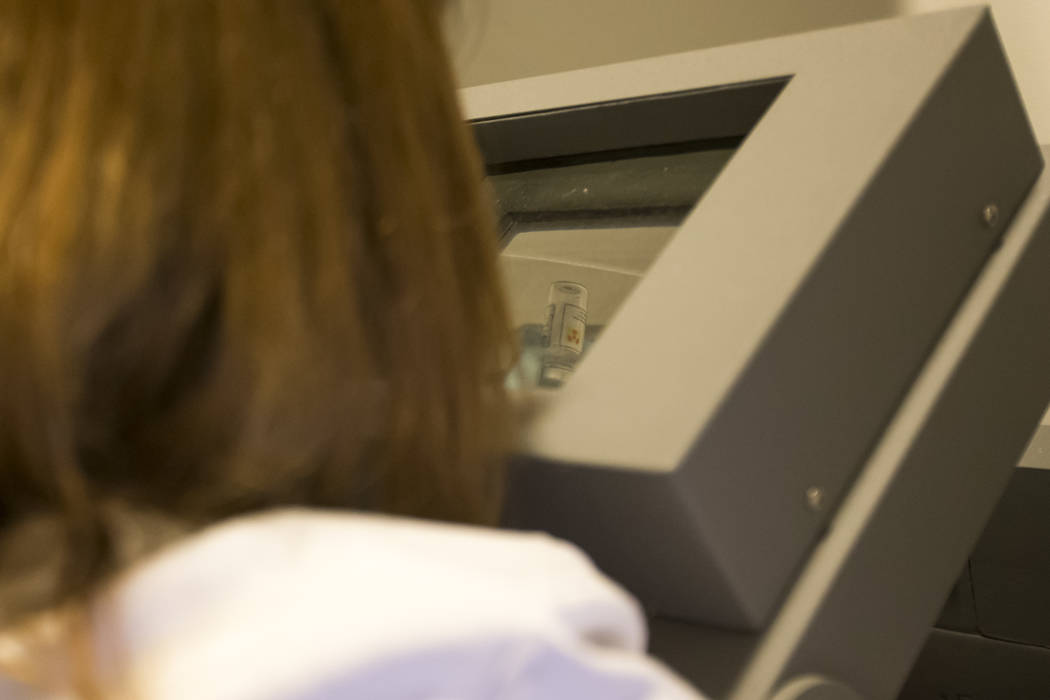 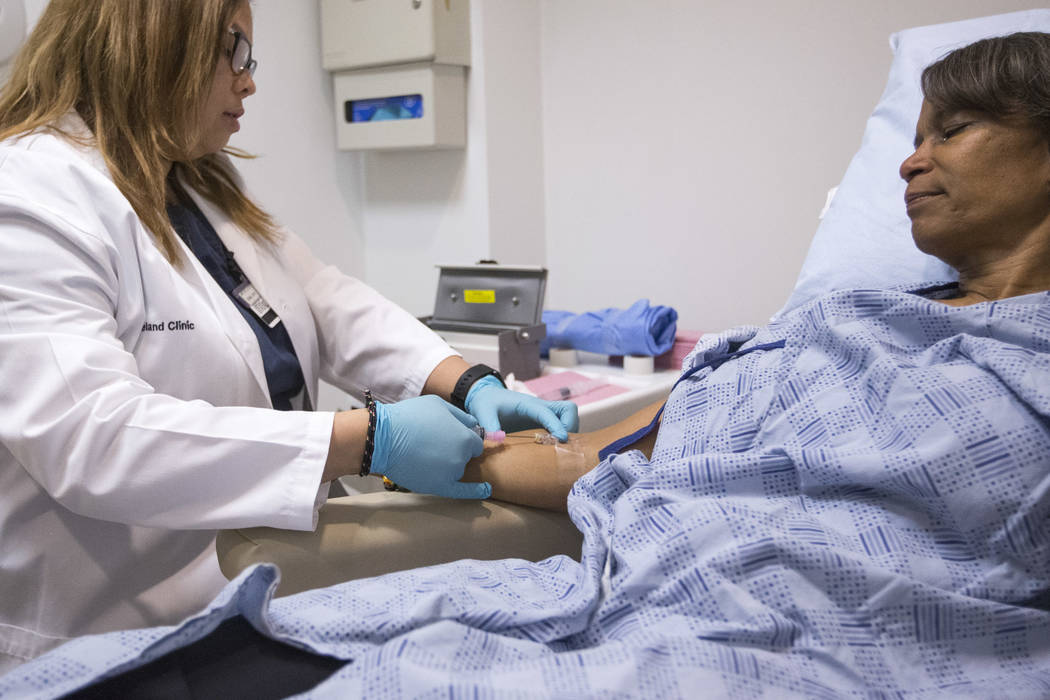 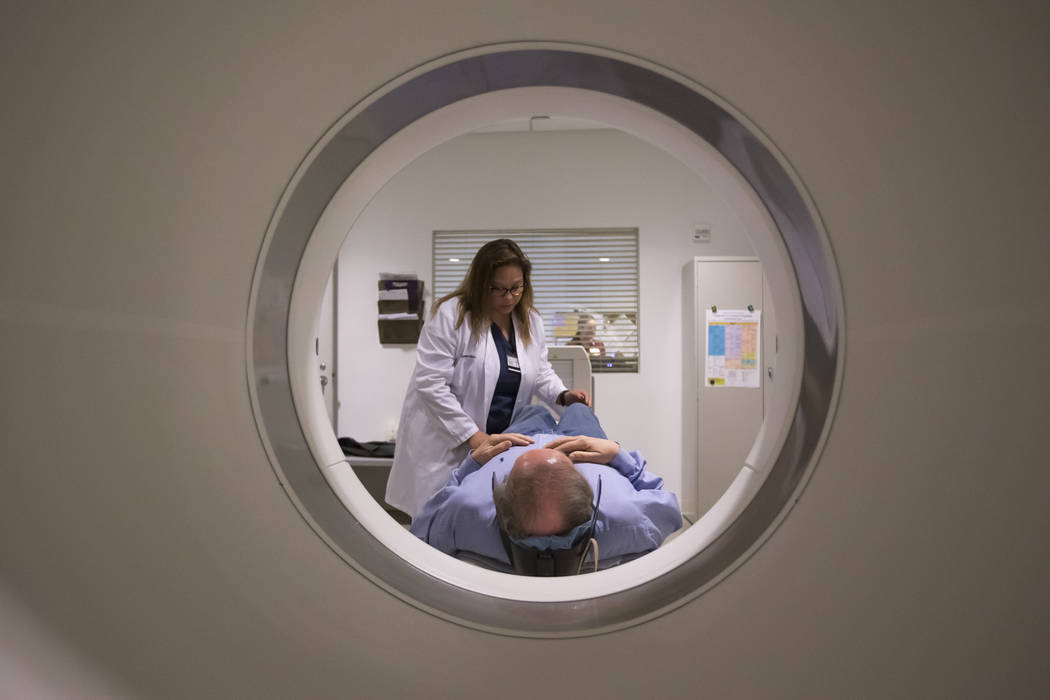 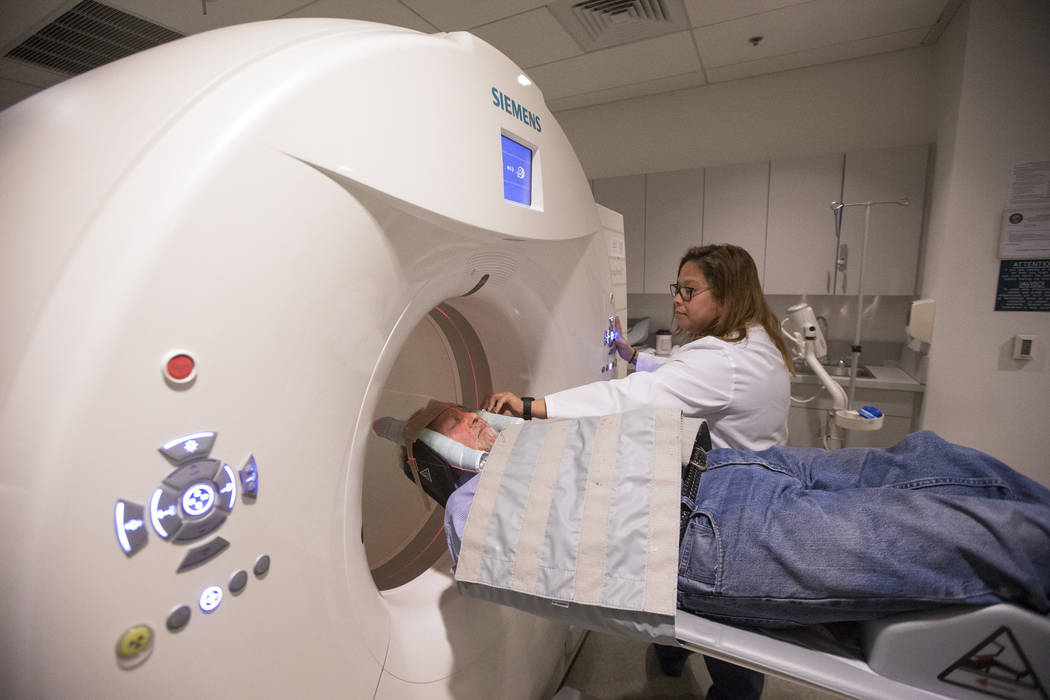 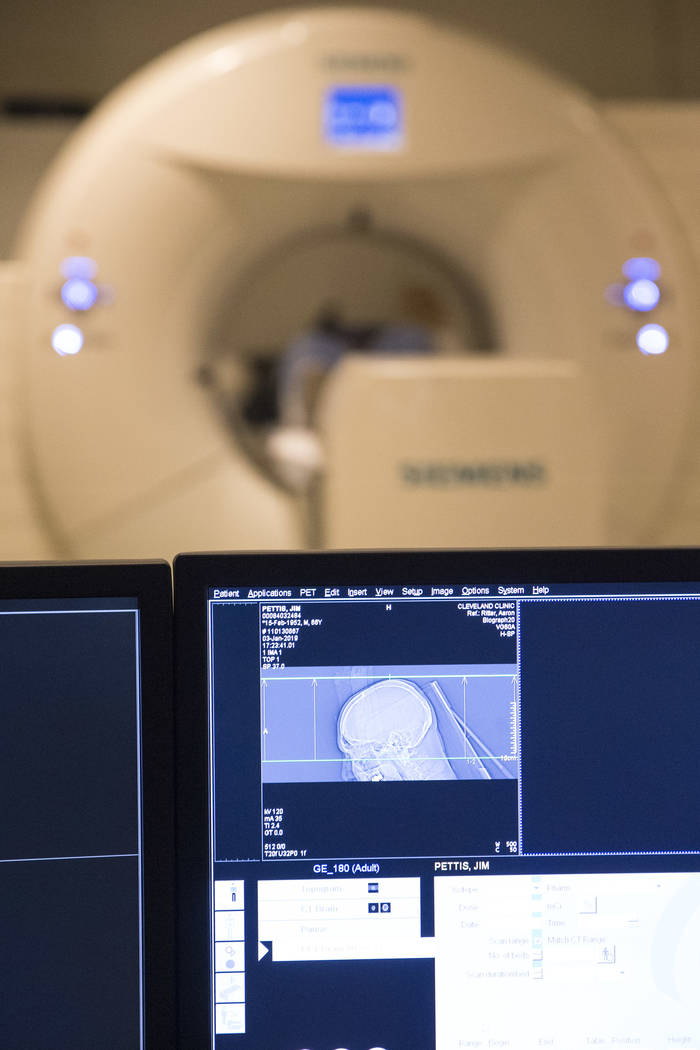 Images of the brain of Las Vegas resident Jim Pettis are seen on a computer screen as he lies in a PET/CT machine during a GE 180 scan at the Cleveland Clinic - Lou Ruvo Center for Brain Health in downtown Las Vegas on Thursday, Jan. 3, 2019. Richard Brian Las Vegas Review-Journal @vegasphotograph 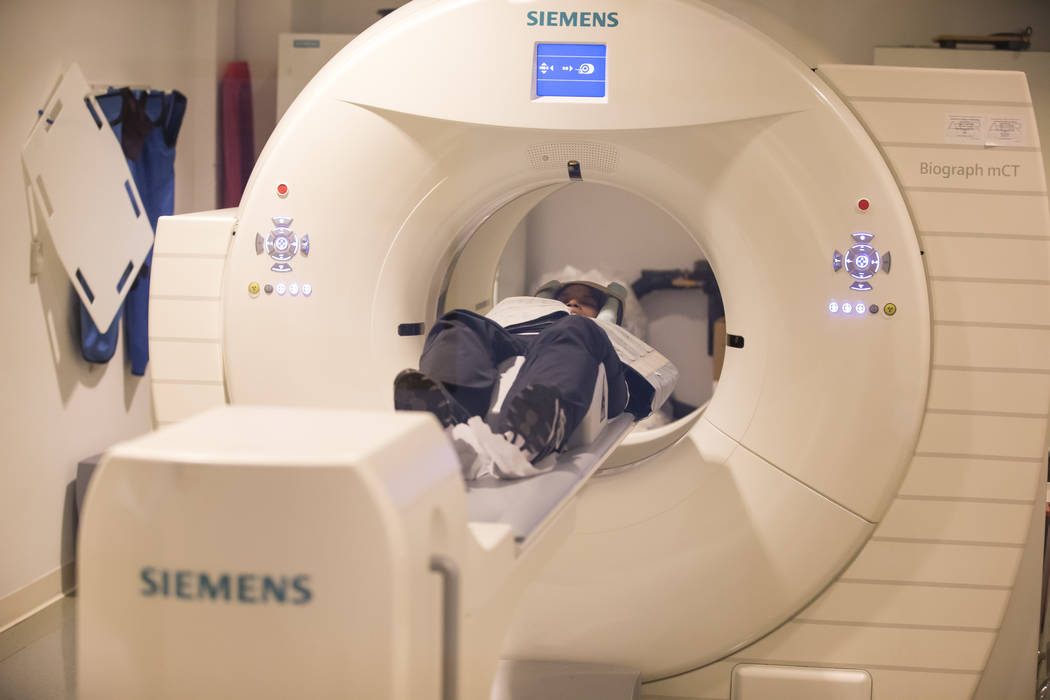 In the only trial of its kind in the United States, a Las Vegas doctor is injecting patients with a radioactive liquid and scanning their brains in hopes of discovering the cause of Alzheimer’s and Parkinson’s diseases.

Dr. Aaron Ritter at the Cleveland Clinic Lou Ruvo Center for Brain Health in Las Vegas received approval from the Food and Drug Administration to test the GE180 tracer in humans to research neurodegeneration.

If the substance binds to proteins in the brain linked to neuroinflammation, a patient’s scan will light up red, perhaps an early sign of the two diseases.

His project, part of the center’s National Institutes of Health-funded COBRE study to understand the underlying causes of Alzheimer’s and Parkinson’s diseases, scans subjects’ brain to pinpoint whether inflammation there may be a factor in development of these diseases. Scans are performed on people who have and haven’t been diagnosed with the diseases.

If the research indicates that brain inflammation is a factor, the discovery could help doctors look into treatment that attacks the inflammation, potentially slowing down progression of the disease or stopping it in its tracks.

“We never have really been able to measure inflammation in the brain,” said Ritter, who directs clinical trials at the Lou Ruvo Center. “This is a new way to kind of look at these degenerative issues.”

Researchers aren’t sure what causes Alzheimer’s and Parkinson’s diseases.

Alzheimer’s disease, for example, has been linked to a buildup of beta-amyloid proteins in the brain. But it’s still not known whether they’re produced as a result of the disease or are a cause, Ritter said.

“There’s been medicines that have cleared out amyloid from the brain, and it hasn’t really helped,” he said.

New research suggests inflammation could play a role in the development of Alzheimer’s and Parkinson’s, though those studies have been based on posthumous examinations of the brains of those afflicted by the diseases.

“It’s been, you know, 20, 30 years of trying to find medicines that slow or stop the disease, and we just haven’t gotten there yet,” Ritter said. “We need new approaches, so this is kind of a different approach.”

Commitment from patients like Jim Pettis, 66, and Pam Shields, 59, neither of whom has been diagnosed with either disease, may help Ritter and his team make advancements in the field. Both said they were moved to participate after watching their mothers struggle with dementia.

“If not me, then who? We all have to do our part,” said Shields, who has watched her mother, once an avid singer in her church choir and a lover of long walks, deteriorate over the past eight years.

“In my mom’s case, it’s a long death. She’s very physically healthy, so she’s going to live a long time with this disease,” Shields said. “They don’t know who they are. They don’t know what they’re doing. They don’t know how to feed themselves. It’s the most awful thing in the world, and nobody should have to go through that.”

Pettis wants to know his own risk of developing dementia, too, he said.

“I wanted to find out everything I could about it,” he said, adding that he wanted to be proactive about a potential diagnosis in hopes that the research will help scientists catch up with the disease.

Shields and Pettis are control subjects in the trial, which will scan the brains of about 70 patients now and again in one year to monitor any progression in inflammation.

“We’re optimistic,” she said of the research. “Even if this scan doesn’t bind well to neuroinflammation, we still have information.”

She added: “It’s just another tool in the toolbox.”