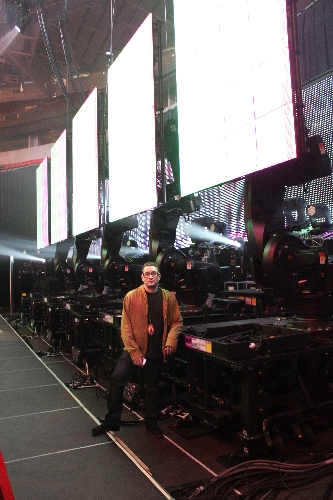 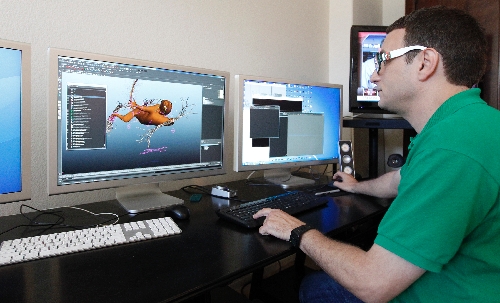 Andy Robot isn’t his real name. But it might as well be.

After all, Andy Flessas often signs his emails “Andy Robot.” (That’s because, when he would introduce himself, “People would just go, ‘Oh, Andy Robot,’ ” he explains.)

Robot statues — from life-size sculptures to tabletop toys — populate his northwest Las Vegas home and the guest-house office out back. (Because “my clients send me weird robot things.”)

Even the personalized license plates on his Toyota minivan — which read “ROBOTS” — proclaim Flessas’ affinity for robots.

For one thing, Flessas’ company Robotic Arts holds the patent on RoboScreen technology, which fuses high-definition video screens and industrial robots, enabling the screens to twist and do everything but shout, rather than just hang around.

Those RoboScreens, in development since 2004, got a star-studded showcase recently during Bon Jovi’s 2010-2011 Circle tour, which wrapped up in April after playing to more than a million fans. (The music industry publication Billboard cited it as 2010’s top-grossing tour.)

On the road, each of five giant robots controlled a 6-by-9-foot LED screen, choreographed to move in time to the music. During the show, the RoboScreens flipped over to become stage platforms and terraced stairs, with lead singer Jon Bon Jovi serving as human payload for robots originally designed as factory equipment. (Find links to video from the Bon Jovi tour online at www.casinoarts.com.)

But the Bon Jovi tour was just the beginning for RoboScreens, Flessas believes.

He envisions home versions of the technology “taking the TV off the wall,” enabling kids to play video games with a screen that reacts to their moves and makes “kinetic motion part of the game play,” he explains.

And there’s plenty more where those ideas came from.

In short, Flessas contends, robots “can make a whole bunch of stuff cooler.”

Flessas, who turns 42 next month, has been making, and using, cool stuff since his suburban Milwaukee youth, where his parents encouraged his creativity by building him a basement recording studio — which he charged his friends $10 to use.

By 14, “when all my friends were discovering cigarettes behind the theater,” Flessas was busy discovering animation — an interest he pursued at Chicago’s Columbia College.

Graduating in three years, Flessas returned to Milwaukee and founded a company he dubbed Cybertoons, as preparations for the Potawatomi Bingo Casino downtown were under way.

After coming up with B-13, a cartoon character to promote the casino, Flessas got his first advertising contract: 10 commercials at $10,000 apiece.

Three decades later, B-13 remains the Potawatomi casino’s mascot. But Flessas doesn’t collect any payment despite the character’s longevity, because he sold the rights for $2,500 — “a lot of money at the time.”

From that, Flessas “learned to raise my prices,” he acknowledges. (Designing animated logos for ESPN and other clients helped him access “the big money.”)

He also learned a lot about casinos and gaming — knowledge that would serve him well when he and wife Summerly decided to leave the Midwest after Sept. 11, 2001, when advertising agencies “started canceling everything.”

After deciding to relocate, Flessas asked himself, “Where is a computer animator most needed?” The answer: “Las Vegas is the place.”

Then again, Las Vegas has been the place for Flessas since childhood, when he joined his mother on dozens of visits. (Flessas proved so adept at playing Whack-a-Mole at Circus Circus’ Carnival Midway that, after he won every prize, security guards showed him to the door so he couldn’t add to his haul.)

After deciding on Las Vegas as their next home, Flessas remembers how he and Summerly walked the Strip, mapping video installations there — and hoping his computer animation might appear someday on the giant casino marquees.

Comedian Rita Rudner became the first Strip design for Flessas’ Casino Arts company — but hardly the last. Since that debut, Flessas’ computer animation has touted everything from the MGM Grand’s Studio 54 to the Wynn’s “Le Reve.”

“As an animator working for the guy, all you have to do is keep your mouth shut,” Flessas says. “He’s like the Obi-Wan Kenobi of casinos.”

For Flessas, Las Vegas has provided an ideal creative base.

“In terms of environment, this is as zany as it gets,” he says of Las Vegas, where he and Summerly have lived for a decade.

Not only is living here “a good way to get a cross-section of popular culture,” Las Vegas provides “a lot of opportunity for artists,” whose creative talents may help revive Southern Nevada, Flessas contends. “In this post-apocalyptic economic environment, you have to be creative.”

But Las Vegas isn’t the only setting for Flessas’ creativity, which also has lit up casinos in Macau and sports arenas across America.

In preparation for that debut, Flessas parks himself in front of a computer monitor, reviewing recent animation of a whimsical water-skiing squirrel — being towed behind two leaping trout.

Good thing Flessas’ office is as close as the guest house, because “I work all night” on occasion, he admits. “I like waking up each day, thinking ‘Today I’m going to make a robot or make some clouds go.’ ”

Either way, it’s just another way for Andy Robot to pursue what he calls “the next step in computer animation.”

For him, “robots are the next way to animate the world,” he says. “I want to do something super-creative, to be culturally impactful with robots as an art form.”