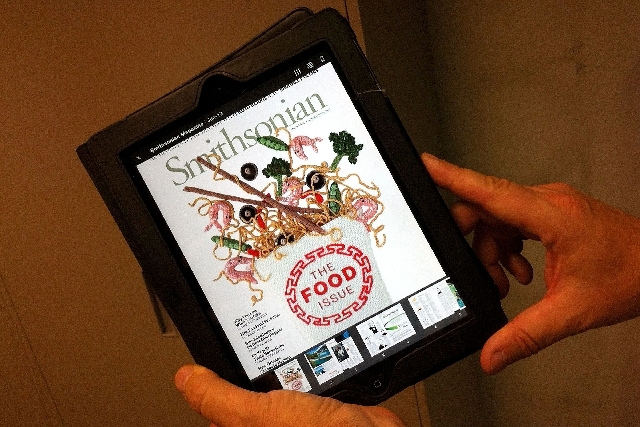 This is an example of a magazine on an iPad that was checked out through Clark County Library and Zinio.

There was always something stopping Elizabeth Halt from buying magazines.

“I’d rather spend money on organic food than a magazine,” she said.

But recently, Halt read five to six magazines in a single week, for free, from the comfort of her home on her iPad, thanks to the public library.

The library district has partnered with RBdigital from Recorded Books to give cardholders unlimited access to a collection of digital magazines. With this new feature, cardholders can check out magazines through Zinio and keep them for as long as they’d like, free of charge, said Lauren Stokes, virtual library manager for the Las Vegas-Clark County Library District.

Zinio is a virtual newsstand that digitally re-creates magazines page for page, allowing readers to engage in e-magazines just as they would in print magazines. Zinio also includes interactive features, such as audio and video.

“(Library cardholders) love it. It’s something that I don’t think we can take away,” Stokes said. “They’re downloading magazines left and right.”

LeAnna Conley is a longtime magazine reader who has adapted to the digital format.

“I’ve always been a magazine lover, so I’m a little nostalgic for print magazines,” Conley said. “But it is incredibly convenient and nice to have so many titles available to you.”

Conley enjoys reading Clean Eating, Martha Stewart Living and Climbing, among others. She has already recommended the feature to “quite a few people,” she added.

To get started, library cardholders create a personal Zinio account to access the e-magazine collection. They can download the magazines to their computers, cellphones and just about any tablet with Internet connection, except the Nook Color, Stokes said. Consumer Reports, National Geographic, O and Reader’s Digest are just some of the magazines available to cardholders.

Through Zinio, library cardholders have unlimited digital access to the most current issues of magazines, as well as archived issues.

At this time, the library district doesn’t get children’s magazines in digital form because they are unavailable for them to purchase, Stokes said.

When Stokes learned that other libraries across the country were using Zinio for e-magazine subscriptions, she created a presentation and pitched the idea to the library district administration during a public service meeting.

“They decided to give it a try and it’s been very successful,” Stokes said.

But cardholders might be disappointed to learn that Consumer Reports will no longer be one of the magazines available to them after July.

Consumer Reports’ publishers have pulled out of Zinio for their next issues but she’s not sure why, Stokes said.

“I don’t know if it’s a revenue issue, but it’s at the mercy of the publishers,” she said. “It’s a big disappointment. Consumer Reports is very popular with the patrons.”

The library district has a “Hot Topics” help section on its website that makes it easy for patrons to navigate their way through Zinio. The website includes a “how to use” video, a list of the magazine titles available and a “tips and tricks” section for using Zinio. Patrons can also post questions, comments and feedback on the website or call the virtual library desk for help.

Boulder City residents are the only ones in Southern Nevada without access to the new feature because the independent library district hasn’t purchased a subscription, Stokes said.

Despite the e-magazines’ popularity with some patrons, Stokes doesn’t think the print magazines in the library will be affected much because not all of them are available for cardholders online.

There are some magazines people have asked for that aren’t available to them digitally, but the library district has to consider what they can and cannot purchase from Zinio depending on the cost and public interest in the magazines.