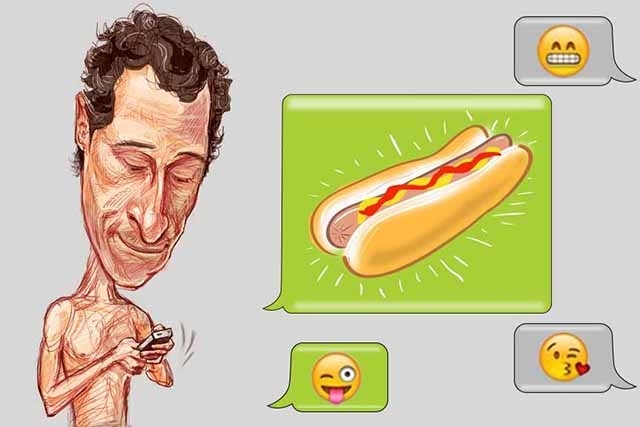 Anthony Weiner made a mistake. Again. It involved his penis. Again. And he’s sorry. Again.

The new scandal, which bears a striking resemblance to the old scandal, brings a form of infidelity, one void of physical touch, to the limelight.

As the New York City mayoral candidate (who dropped from front-runner to fourth place) and disgraced former congressman discussed inappropriate photos and messages he sent a woman who wasn’t his wife in the summer of 2012, people at home shook their heads over a married man engaging in “sexting.” Others wondered why it was a big deal.

“There’s a lot of debate on whether it’s physically crossing the line,” she says. “Is a sexual text considered a betrayal, physically, of the relationship? Some clients say yes, but some will say, ‘But I never physically interacted with her, even if I masturbated to what she was sending me.’  ”

To which Hertlein then turns the discussion from one of right or wrong to acknowledgment of the hurt it caused the partner.

Old statistics regarding infidelity from a traditional perspective (sans technology advancements) indicated 40 percent of people reported cheating on partners, she says. Of course, cheating is linked to opportunities, and the Internet and smartphones offer ample opportunity.

More recent research “cites these issues as being part of relational dissolution in 50 to 60 percent of cases,” Hertlein says.

Other than the sexual arousal, she adds, the appeal of this type of cheating has many layers.

First, it’s affordable. No hotel room, wining or dining is necessary. Second, there’s a high level of vulnerability control when communicating via text. An emoticon serves as a fine buffer. Third, cheaters can take on a new persona with sexting, i.e. Carlos Danger, Weiner’s alter ego.

All of those benefits tend to camouflage another fact regarding sexting: It’s easy to get busted doing it.

According to Hertlein, this comes down to something she refers to in her book as “technological literacy.” If one partner is more adept with a computer or smartphone, so will be his or her investigative skills.

Conventional infidelity meant secret phone calls and meeting places. Sexting is a text or click away.

When the behavior doesn’t stop and a spouse chooses to stick it out with a cheating partner, judgment can result. In the case of Huma Abedin, Weiner’s wife, it’s public, widespread judgment.

Comella notes the ease with which the public forgave both Weiner and Eliot Spitzer, whose relations with a prostitute caused him to resign his position as New York governor in 2008. Spitzer is running for New York city controller.

Is it because as a society we’ve become used to male politicians getting entangled in sexual affairs and, once the media hype has quieted down, just shrug it off?

“We will have a better sense of that when we see the results of the election,” she says. “If Weiner is able to pull out a victory then that suggests it doesn’t matter as much as it did 10 or 20 years ago.”